You can't spell Hokies without B-U-D

As the potent Wake Forest offense comes to Lane, can the Hokies give their defensive coordinator the ending he deserves? 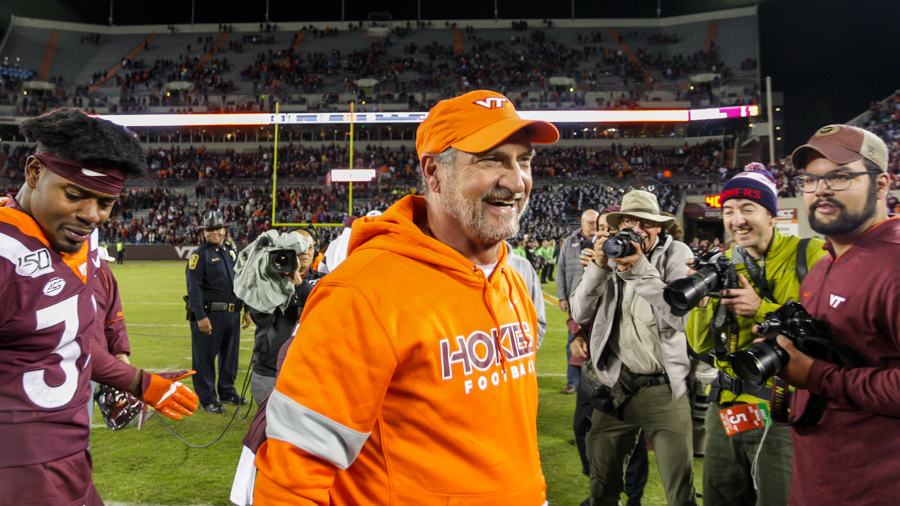 I'm not going to tell you about the game, because you already know which one I'm talking about. You already know the final score, how it ended, and how it lives on as maybe the worst college football game ever. But considering this is the first time Virginia Tech and Wake Forest have played since, it's hard to not mention it.

When you're in the press box watching something with no discernable action for three-and-a-half hours, you have a lot of time to think. And as I sat looking down towards the calamity unfolding on BB&T Field, bored out of my mind, watching shells of the Hokies and Demon Deacons trade blunders, my mind wandered.

I thought about the long, strange trip Tech's 2014 season had been. Wins over the only two ranked opponents on their schedule (Ohio State and Duke) coupled with a multitude of embarrassing losses. None of the defeats, by the way, were more appalling than the one unveiling before me.

I thought about Frank Beamer and how legends almost never end gracefully. About Whit Babcock watching his bellcow program dissolve into mediocrity right before his eyes. I considered the probability of the bowl streak ending with a loss to Virginia after Thanksgiving.

Needless to say, things got dark.

But most of all, I thought about Bud Foster. There he was, a legendary defensive coordinator who had multiple opportunities to flee to bigger programs, coaching at a place that couldn't muster a single point against the third worst team in power five football. This wasn't the first bout of offensive ineptitude in Foster's then-19th season as sole DC, but when it came to wasting a great defensive performance this was rock bottom.

I couldn't stop thinking about how Foster's career was beginning to border on a football tragedy. How could a coordinator so good never get a chance to lead his own program? Not only that, but how could he spend the majority of his career not even coaching a national title contender?

I thought about identity. The Hokies didn't just win for most of Foster's tenure, they were also cool. Think about it: how on earth did a team from the Blue Ridge — four hours away from the nearest city — have so much swag? Sure, Michael Vick played a huge part in the team's rise in popularity, but he threw his last pass in 2000, and Tech kept the vibe going throughout the decade.

It was the players on Foster's side of the field who brought the juice. Who screamed "welcome to the Terror Dome," who knocked dudes out and let them know what happened:

Vick may have put Blacksburg on the map, but guys like Corey Moore, John Engelberger, Ben Taylor, DeAngelo Hall, both Adibi brothers, Vince Hall, Brandon Flowers, Ike Charlton, Cory Bird, Darryl Tapp, Macho Harris, Kam Chancellor, Willie Pile, Cody Grimm, Roc Carmichael, Jayron Hosley, all of the Fullers, James Anderson, Aaron Rouse, Jimmy Williams, and many others left off this intentionally long list, they're the true backbone of the Hokies, and it's not a coincidence that they were all coached by one man.

Frank Beamer built Virginia Tech, but it was Bud Foster who established its heart and soul. And as Michael Brewer and John Wolford competed to see who could take the most crippling sack that November afternoon, I could only wonder — would Bud ever get the ending he deserved?