It appears Mack Brown added an ace recruiter to his staff.

Not worried at all about UNC.

Burying your head in the sand is poor approach. I don't think anyone thinks UNC is becoming Alabama overnight, but recruiting in the Tar Heel State got harder for the Hokies. Even one 4-star less per cycle out of Carolina would hurt the Hokies. (Suppose Tech landed Alim McNeil, or didn't get both Dax and Turner this go around.) Even a moderate turnaround by UNC is poised to affect Tech negatively.

He's gotten some big names (at least star-wise), according to 247:

Maybe I'm being naive but I still don't see how high-level recruits are willing to go to UNC now that a 67-year-old has been is the head coach. IMHO, Mack Brown doesn't move the needle for me the way Kingsbury or Venables would have.

I'm not worried. UNC can hire as many used cars salesman as they want if they're content with selling lemons.

I don't expect him to pull the elite talent he does now, but I do think he'll become a thorn in Tech's side (and that's bad).

We can agree to disagree. If he flips someone like Roseman-Sinclair to UNC, I'm willing to eat crow.

What if he pulls a few along the high 3-star talent level: Farley, Bowick, Crossen, Thompson, etc... That's a win-win for North Carolina, because it hurts the Hokies and benefits the Heels. Tech doubled-down on recruiting North Carolina a couple of cycles ago (and for good reasons). N.C. State has stepped up its game, and Carolina appears to be doing so too. Part of my point is, it doesn't even need to be 4-star talent lost to feel the pain.

Leg for owning it. Let's hope CMB coaches worse than he recruits, much worse.

IMHO, Mack Brown doesn't move the needle for me the way Kingsbury or Venables would have.

It's definitely a questionable hire, but if he can put together a fantastic staff, it can still work.

so was Shane when we brought him in

Shane got a lot of credit for his stint as recruiting coordinator (i.e. he was associated with more recruitments even though he wasn't the main recruiter.) To my knowledge, that's not the case here.

Was he not credited with landing Clowney (or maybe a #1 recruit before him, name might have slipped my mind)? I remember that being the big exciting draw for when we brought him back.

I think it was Alshon Jeffery (sp?). Also i think he get the RB Lattimore who was really good until his knee injury.

Clowney was one of the most sought-after recruits of all time. If he has that on his name, that's quite the accomplishment.

VT struggled to say the least when Jr. was head recruiter for RVA when he was RB coach. His recruiting stint while employed at VT was underwhelming. Billy Hite was the real deal.

Recruiting the in the ACC < recruiting in SEC

How does he recruit without the name or resources of FSU or A&M? That's the question to be answered.

It was easier to recruit guys who didn't come to play school back then.

I'd definitely negative recruit the crap out of him based on his age and time away from the game.

How long will this dude be a position coach? Why won't anyone promote that guy

Mack will bring in heavy weight staff, retire in 4 years in a better light than getting run out of Texas and handover to the coach in waiting that's been promised the job all along.

Vt Is BuIlT oN gEtTiNG 2* gUyS wHo WaNt To Be HoKiEs, AnD cOaChInG tHeM uP

I'm not convinced. Sounds like an undershirt for cattle.

We all know that the NCAA won't punish UNC so they can go crazy and do whatever the hell they want on the recruiting trail. Having someone who knows the game well and takes advantage of that fact could be a pain for us.

Yeah, I want to know who at UNC has dirt on the NCAA.

1) It's going to take time for Brown and his assistants to reestablish themselves. Fedora has done UNC no favors over the last couple of years with respect to relationships with High school coaches. Additionally, this isn't the late 90s where Mack had Ken Browning in staff and had Charlie Bryant with the NCHSAA playing all of the high school championship games in Kenan Stadium. It's weird, but it's going to take time for Carolina to build trust back.

3). Id be more concerned about Des Ketchings at NC State more than Brewer. Simply put over the last four years, Ketchings has been the lead recruiter for a lot of kids that were down to NC State vs VT (Hines, McNeil etc.) and he won those battles.

4). VT has made great in roads in NC and the name brand is 1000 times better now in NC than it was the last time Mack was at UNC. To give you an idea of how bad it was, I was the only graduate in my class of 500 in 1997 to even apply to VT, and I honestly had no idea where Blacksburg was when I applied.

5). Recruiting, signing, and keeping eligible athletes with marginal grades and scores is a lot more difficult this time around for Mack. The system they set up to keep guys eligible is dismantled.

So while I'm sure UNC will make some strides in recruiting with the new staff, the damage that was done by Fedora is going to take more time to repair than I think Brown has years as a coach. Does Mack have the energy to make this happen? Mack getting the band back together just doesn't seem like something that's going to work as well as they think it will

Have you seen the commits UNC has right now vs where we are? Leagues difference in a few short months. May not pan out, but we are falling behind in the ACC.

Same thing happened to a lesser extent with UVA and Timecop, hopefully those don't pan out as well. Winning helps.

Point taken but TimeCop or Mack Brown? I know who I'd commit to lol. Especially after UNCheat was so close to beating Clemson. That's a HUGE selling point in my book. loluva didn't have that.

The worst part is look at the offer lists. We're on almost every kid they got.

I stand by the above. One year of recruiting does not make a program. Also, scoreboard

Mack also kept Thigpen around, another good recruiter. I think he will have a great staff in that regard, and Tech will feel it.

Does VT have an ace recruiter?

Well, we've got the guy who helped us land Devon Hunter 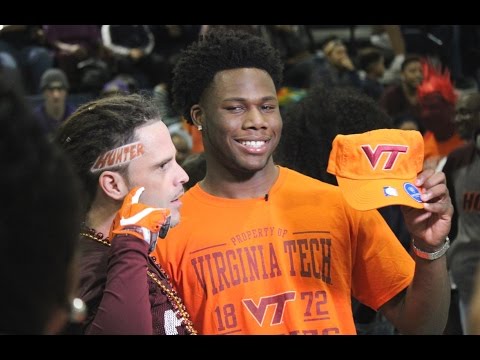 That is some strong side eye from Hunter.

Back when I was a little better networked, I heard firsthand that recruits and their families absolutely loved Stiney. Even recruits who ended up elsewhere noted that they still loved Stiney.

Stinespring would come to Alleghany High School periodically even though our football program was awful. Granted that is the high school he went to, I believe

This is no bueno. Hopefully he doesn't come in and wreck us on all the NC guys we want. Would love for VT to land an ace recruiter like this guy. A&M fans are very upset about losing him.

Would be nice for us to higher a decent recruiter, let alone an ace one.

I feel like we are losing in the arms race to go and face the Clemson giant. UNCheat is making big waves and we are stuck in the kiddie pool. And no, I'm not throwing big bucks at HC.