Northwestern's dual record last year was 5-10 (2-7 Big 10). Throughout last year, their line-up was always in a flux, either due to injuries or weight bumps. One of those victories did come against our Hokies though, 20-16. The Wildcats won 6 of 10 matches with two of those being by major decision. Virginia Tech was also assessed a penalty point from that match. So look for our wrestlers wanting to exact some revenge! Coach Storniolo took his position at Northwestern in March of 2016. Since 2010 he was an assistant coach for the Wildcats as well. His collegiate wrestling career began at Penn State, but transferred after his freshman year to Oklahoma. From there he compiled a record of 117-22 where he was an NCAA qualifier four times and an NCAA All-American twice. Matt Storniolo took a 2-13 team and has turn it into a middle-pack, Big Ten wrestling squad going 7-8, 11-4, and 5-10 in respective years for dual meets. He has already coached one NCAA Championship and hopes to build on that trend. 125lbs: #3 Sebastian Rivera (r-JR, Jackson NJ)
Nicknamed "SeaBass", is currently the #3 ranked 125lber in country. His current, overall record is 75-14, having qualified for NCAA Tournament and earned All-American twice. Last year, Rivera wrestled at both 125lbs and 133lbs, going on to finish 3rd in the NCAA tournament. In other words, he's a national title contender. During the dual against Virginia Tech in 2018, he beat Joey Prata 19-8, earning a major decision.

133lbs: Colin Valvidiez (JR, Lee's Summit, MO)
Currently unranked, but could be considered a top-30 talent for 133lbs as he always wrestles to rank or seed. His overall record is 37-33 with one NCAA tournament appearance. Last year, he lost to Korbin Myers, 6-4 decision.

141lbs: Alec McKenna (r-SR, Winnetka IL) OR #20 Yahya Thomas (r-SO, Chicago IL)
McKenna is an unranked wrestler who appeared in the second half of the 2018-2019 season for Northwestern. His collegiate record is 32-57 with no post season appearances.

Yahya Thomas wrestled at 141lbs last year, but could be bumping up to 149lbs (where he is ranked #20). He did not compete in all of Northwestern's duals or wrestle in the Big 10 Championship, but did place third in the Midland Tournament. He wrestled Mitch Moore in the 2018 dual where we won a 2-1 decision. His overall record is 28-15.

149lbs: Shayne Oster (SR, Homer Glen, IL)
Wrestled in last years dual where he won against Ryan Blees, 8-7 tiebreaker. His current record is 37-44, and made his first NCAA Tournament appearance during the 2018-2019 season. 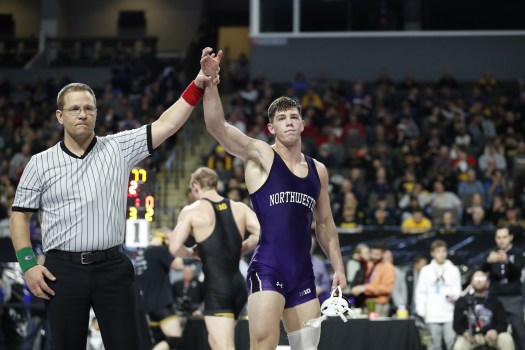 157lbs: #3 Ryan Deakin (r-JR, Broomfield CO)
The other stud of Northwestern, he is currently the #3 ranked 157lber, but also could be considered the best in his weight class. Deakin's current record is 83-18 and has qualified for the NCAA Tournament twice, with last year being the first time he has earned All-American status. He soundly defeated BC LaPrade in the first match up, 13-3.

165lbs: Erich Byelick (r-SO, Orlando FL)
A huge unknown for the Wildcats, wrestled unattached last year so his record is only 12-9. Being unattached means he did not wrestle in last years meet against Virginia Tech

174lbs: Tyler Morland (r-SO, Brighton MI)
Unranked as of now, but could very well finish as a top-25 wrestler for 174lbs. Last year he wrestled at 165lbs, where he only wrestled in ten dual matches and earned one win in the Big Ten Tournament, This somehow allowed him to qualify for the NCAA tournament. He did not wrestle in the Virginia Tech dual in 2018 though.

185lbs: Jack Jessen (r-FR, Villa Park IL)
He beat out last year's starter Brendan Devine (who lost to Zack Vavatsky by fall, in 2018). His record is 12-7 as an unattached wrestler, but he looks to make big waves this year. 197lbs: #13 Lucas Davison (r-FR, Chesterton IN)
He's the next big thing for Northwestern. Ranked #19 by OpenMat (#11 in WrestleStats and unranked in InterMat) for the 197lbs weight class; he wrestled unattached last year and posted a record of 9-4 in some big name tournaments.

285lbs: Jack Heyob (r-FR, Cincinnati OH)
Another new comer for the Wildcats. He wrestled unattached last year as well, where he earned a record of 9-9.

So far, there has been no indication of last minute substitutions for either side so both squads will have their expected line-ups. This is the first time in Virginia Tech Wrestling history, that a match has been held outdoors. Its gonna be a chilly dual, so it will be interesting to see how the wrestlers stay warm.

Northwestern's strongest weights are in line with Virginia Tech's weakest. Virginia Tech rolls out five ranked wrestlers: Gerardi (#15), M. Moore (#17), LaPrade (#18), McFadden (#4), and Bolen (#10). I expect this match to be as much as a nailbiter as Missouri, meaning the Hokies have to earn bonus points. They got skunked last year by not capitalizing and losing the toss-ups.

The toss-up weight classes to watch are 141lbs, 149lbs, and 174lbs. If one or two of these swing a different way, the Hokies could be in trouble (my eyes are on 149lbs to see if Brent Moore can bounce back). But I see Virginia Tech preventing many bonus points and being able to exact revenge 20-13.

I will be there in the front row

Like the matchup breakdown! Thanks! For some reason, hokiesports hasn't posted the potential matchups for any of their matches this year. Also, like the predictions. I agree with most of them, but feel as though 149 is probably a loss and I think we'll probably lose another one of the losses you mentioned by bonus points. Unfortunately, I'd say BC prob tries to go big and gets put on his back while trying to do a duck under or something.

It was really tough making the prediction for 149lbs. I kept going back and forth with it but ended up giving Breent the benefit of the doubt being the more seasoned and hungry wrestler. Im hoping LaPrade sits back and doesn't fire off to much offense. He's gotta wrestle for the team during his individual match

Yeah, I wish I was less right about my prediction. I think Brent is mentally broke. Not sure if BC or Brady could make the cut to 149, but I think that's the only option at this point. 174 and 149 may just be L's this season. I see 133 and 197 progressing as the season goes, and 285 is a pleasant surprise for sure. Any idea why we haven't seen Korbin yet?

Korbin is out for awhile with an injury

Starting off at 125lbs and surprised to see Rivera not starting at 125, he will go at 133lbs! Prata has a chance

Prata wins 2-0. Had an escape in the 2nd period and rode out his opponent in the 3rd period for another point! Tech leads 3-0

Mitch Moore will be going against Jack Tolin, another change to the NW line-up

LaPrade takes the loss 12-3. All of NW victories have been by major decision. They lead 12-9 now

This ref is straight garbage

Oster bulks up to 165lbs and will be McFadden's prey/opponent

McFadden couldn't quite get the technical fall but picks up the major, 18-6. Hokies retake the lead 13-12

He really had a good chance to win the match. He couldn't finish his shots early and then ran out of gas late and that cost him.

Same thing could be said about Hughes, from watching that match. Just never fully committed

Borst gets the maj. dec. and secures the win. Virginia Tech beats Northwestern 21-18!

I'm not a wrestling guy, but what a roller coaster! Let's go!

Hey VPIVMI15, looks like on Sunday we take on one of the big boys - Ohio State at their place. Looking forward to your breakdown/analysis on how we match up with them.

Also, Saturday morning Mekhi Lewis and Ty Waltz wrestling in NY as they try to qualify for the US Olympic Trials. Go Hokies!

Working on it now, also the Wolfpack open is the weekend for non-starters!