I thought this was an interesting article by the Houston Chronicle.

I guess there isn't much hype around the A&M Basketball program on campus thus far and attendance has been low.

More interestingly, though, were a few snippets from the article that are very BUZZ-worthy and sort of funny, at least to me, to see these quirks transferring over to a new program.

Texas A&M's Buzz Williams on fans in stands: 'I'm not good at begging anybody'

Buzz hasn't changed how much he doesn't love doing media:

Williams did little in the offseason to promote the program, declining multiple media opportunities to help spread the word about Aggies basketball and so forth.

I asked Williams this week if he believes simply winning will lead to crowds, and the result was a nearly seven-minute answer, one with occasionally fascinating insight into what makes A&M's new basketball boss tick.

How he changed the program here at Tech and how it'll happen for A&M (mostly hey look we're in the article!):

"In our five years at Virginia Tech, that's what ended up happening," Williams said of filling the corners of the Hokies' arena. "We played Maine in Year (3) on Nov. 11, 2016, and it was sold out. That's because there was a crescendo to what we were doing. And people began to respect and appreciate how we went about it.

"If anybody needs some tickets, I get a bunch, if you need them you can (direct message) me on Twitter," he said.

Anyways, I thought it was a silly read and very Buzz-y. Miss him, hate him, whatever your feelings are, he's still off being Buzz.

Fast forward to 2025: Buzz is really quirky at Washington St.

If Mike Leach is still there by then too, things probably getting weird af.

I have a friend who's a super die hard Washington State fan. We were talking football on Monday and he said "Having a quirky coach is fun and endearing when you're winning, but frustrating and annoying when you're losing".

I loved him while he was here. Hated to see him go, but sports is a business and he had to make a choice for him. Glad he is still a character and having fun. It'll be interesting to see how long he lasts. 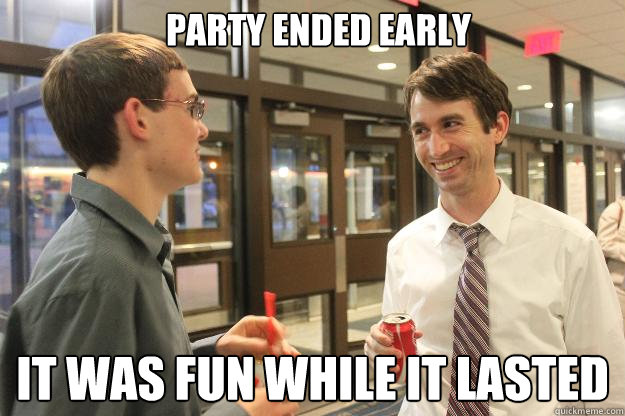 The guy who took us from dead last in the ACC to the Sweet 16.

Never heard of him

He recruited your favorite players

Side note: if there is one thing that Buzz does better than anybody, it's pull talented players out of absolutely nowhere.

I was just thinking yesterday that I really like Tyrece Radford and how he plays. This is a dude with no recruiting profiles on 247 or ESPN or Rivals, hardly any info about him online, etc. and Buzz somehow found him. Similarly, one of the best pure shooters I've ever seen in Ty Outlaw out of a JUCO. And he famously unearthed Jimmy Butler and Jae Crowder from JUCOs.

So I guess we at least have McComas legend Tyrece Radford as a parting gift from the sweaty one.

Outlaw just wasn't some JUCO guy plucked from obscurity though. He was one of the best JUCO players in the country and was recruited by a bunch of P5 programs: Kansas, Arkansas, Oklahoma St, West Virginia, Oregon and Missouri were all heavily interested in him.

It's a testament to Buzz that he was able to get Ty to VT over some of those names, but it's just not true that he was a guy flying under the radar. A bunch of teams wanted him.

That's true. Maybe Zach LeDay is a better example. Dude was a backup scoring 4 ppg at South Florida and Buzz brought him to the Burg to be a star.

More power to him I reckon.

Everybody has a quirk. I have many😂

CMY is a real breath of fresh air.

CMY was at a tailgate at Chicken Hill lot last weekend, drinking Bud Lights, saying hello to everyone. Couldn't have seemed more normal and laid back. I wanted to go shake his hand but was dealing with a horrendous cough and didn't want to pass that along. Super happy to have him

So disappointing. How can we expect him to compete at the ACC level if all he can handle is light beer? Get that man a Bud Heavy

Dude was probably getting a drink at every tailgate. You can't go too big too fast. CMY knows how to pace himself. His motivation for ending the Clemson post-game presser was getting a cold drink. I'm sure he'll be fine.

I had a 12 pack of Bud Diesels with me and trust me, wanted to hand him one. Just didn't want the wrath of Hokie Nation when the next presser involved him hacking up a lung in a coughing and fit and knowing that was from me.

He was probably trying to sell a term life policy to someone.....

"Your life, like this big, delicious, buttery bag of popcorn ain't gonna last forever. I can't protect this popcorn, but you can insure your life and protect your family for as little as $49 a month." https://t.co/LV97BbOMAK— THE KEY PLAY (@thekeyplay) November 13, 2019

I responded to this tweet, and will point it out here.

He dropped a piece of popcorn. 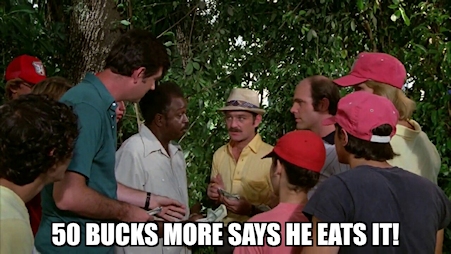 Where's Hank when you need him.

Is this article about that Brent guy?

"If anybody needs some tickets, I get a bunch, if you need them you can (direct message) me on Twitter," he said.

Unless he blocks you for no reason, that is.

You were part of the media, so you were automatically persona non grata by just existing

Buzz has so many qualities to love. But, one thing that always rubbed me wrong is that he never felt like he was part of VT. Like it wouldn't kill the guy to throw on a free VT shirt when at practice or doing an interview. Overall though, he is so unique that he is easy to like.

It was always more about promoting his own brand than that of VT.

What really rubbed me the wrong way was that he was using his personal branding in Texas A&M colors while posting highlights of our tournament run this year before his exit was announced. That.... left a bad taste in my mouth

Not only would he not wear a VT shirt at an NCAA presser, he would make up some bullshit excuse about why the purple and green shirt he was wearing was "speical" and had a back story. Right.

The man also had a maroon and orange basketball court installed at his Blacksburg house. I wouldn't ever insinuate that he didn't care.

Sure. More likely, he was always about resale and knew the court would be an asset in a quick sale. He cared about his job, his career and I believe he did care about "his" players. VT? Nah, not so much.

He cared about his job, his career and I believe he did care about "his" players.

No. I think you mean "our" players. NAW and 5 coming back to Blacksburg for football games this season after Buzz has moved on mean that they're our guys. And not to mention these players that still represent Orange and Maroon instead of TAMU shit brown or whatever means that these guys are very much ours.

Well, from our standpoint, of course they were our players. And the guys who played for him aren't who I was talking about, was I? I was talking about Buzz.
I loved Buzz until I didn't, but hindsight does seem to clarify things a bit, doesn't it? Would I erase the Buzz years? Not on your life. It was fun and gratifying, and a highlight of the last few years of VT sports. But what do I think about the fellow now? Whole 'nother matter. But to be clear, I threw no shade on the players at all.

A final four appearance or other significant accomplishment would lower my cynicism of his personality. If he did something besides get to the sweet 16 to justify him thinking he is John Wooden, it would be more tolerable.

I get that he's a polarizing figure, but the guy's track record so far in CBB is impeccable. He did great things at Marquette and he took VT to three straight NCAA tournaments - that's not something that's ever happened at VT.

Don't get me wrong, there's things about Buzz & his personality that annoy me too, but there's a reason he's considered one of the best coaches in the game.

To be one of the best coaches in the game, you need to get to a final four. That is the elite- the Izzo's, the K's, Beoheim's, Roy's, etc. Brad Stevens got to 2 final fours. Tony Bennett just won a national championship at UVA. That's "the best in the game". Buzz is very good. He is not on that level.

Who said he was at the level of Coach K? He's a really good coach and his personality is kind of a part of that. He brings in recruits that are hardnosed like him. He's kind of a weird dude, but his style is pretty effective.

Btw if Chris Clarke didn't get himself suspended and the NCAA didn't screw us with Nolley, we're potentially talking about a final 4 team. A LOT went wrong for us last year and Buzz still took us to the sweet 16.

We go from worst to 3rd in 5 years and now the Sweet 16 wasn't good enough?

VT basketball has been a solidly, mid level ACC program for 2 out of 3 coaching tenures. VT is not an impossible location to have measured success.

Buzz was performing at a level expected of an good ACC coach. This is the level of production that Coach Young has been hired to produce.

Coach K & Roy Williams are reaching the Final 4 at a rate greater than Buzz's Sweet 16 Rate.

The ACC is a very hard conference to win as you have to defeat Coach K, Roy Williams, & Jim Boeheim but it is a conference where a coach can get talent on campus. Not reaching the Sweet 16 once a decade will probably get you fired at most ACC schools.

It is impressive what Tony Bennett has accomplished at UVA; there have been many coaches fail in their efforts to join the upper echelon of the ACC. It doesn't appear to be a flash-in-the-pan but staying in the top 4 takes a hall of fame caliber coach.

Jim Boeheim is the only coach to have his team ineligible for post season play, and he has had it happen twice.

I can't say that I didn't totally enjoy watching TX A&M take an ass whipping from the Zags tonite. Not sure why that was.