The offense got some good reps in today and geared up for UNC. Defense has some room to grow, but a win is a win (even if today was more exhibition).

Not to worry, we are still flying half a football team.

Only one punt. Gary sighting after a broken femur!

I lasted watching the game longer than the student section, FAM!

McClease had himself a game, FAM!

I lasted watching the game longer than the student section, FAM!

Watching the game on TV, there were some large swathes of open seating in the East. That to me is much more concerning/telling than the students not sticking around.

That will be next week.

Nice win today. It was nice seeing the running game gaining yards and Hazelton is a beast. Let's get the positive juju for the UNC game.

Hazelton just need to catch the ball better. Had at least five uncontested drops that hit his hands. 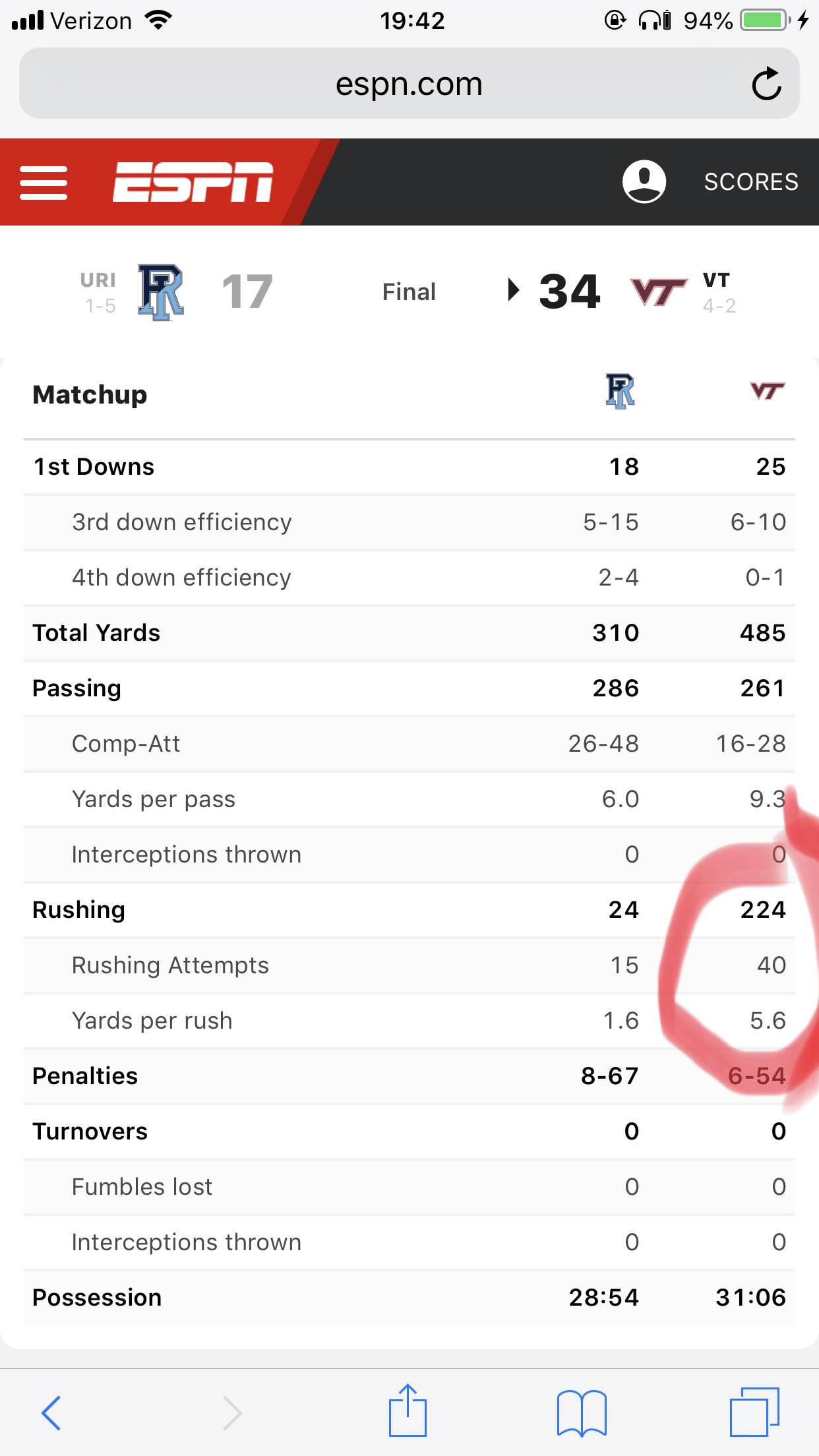 Guys, Hooker is such a difference maker at QB...I'm mad the D couldn't have played better cause as I've been saying on multiple posts the offense did their job today. If the D could get off the field more the offense could've put up 50 and I feel good about saying that. FAM!

The offense was a joy to watch today.

Agreed. A real shit-wrecker in the middle would improve this defense in a hurry.

It would also be great if Floyd's awareness was on par with that of someone who's had several years in Bud's system, which he has. I really like him but he's woefully out of position and/or misses major tackles that he should make (see that 3rd and 29(?) that RI converted because Floyd took a terrible angle and whiffed on the tackle).

Also Quillen got dusted for about all of the third quarter, which was also v disappointing. We gotta get those guys better in a hurry if we want a shot at taking 3 more Ws this year

I think Crawford was starting to provide a little bit of that on the line. Hopefully we get him back full strength next week.

Watching the secondary live today, it is obvious to me the weakness is the under and middle of our zones. Even Rhode island picked on the safeties and occasionally LBs, primarily in the zones. I think QB pressure would help that, but what would help that short of QB pressure?

But look at that time of possession *swoon*

fam from Red's in Shem Creek, Charleston.
It's a win.

Fam! We beat the practice rams today. Let's do it again next week.

These were just warm up Rams for the main showdown with the Tar Heel Rams next week.

Edit* sorry, I'm heavily medicated, no can read good. I think I just reworded your post.

It's all good Fam!

We actually beat the original Rams yesterday. UNC copied the URI rams after visiting them over a hundred years ago and also copied their school colors.

Fam for beating Rhode Island. Weekly wag of the finger to the ACC officiating. 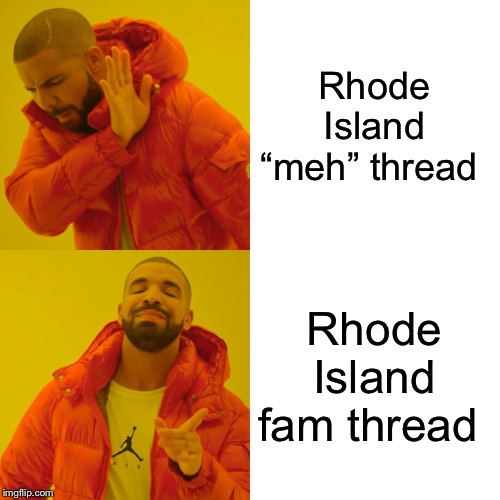 It didn't "look" great defensively, I felt like they had way more yards than they did.
The stats weren't bad.
30% 3rd down conversion allowed
24 yards rushing (we had twice as many penalty yards as they had rushing yards)
They threw for 280, but still, if you didn't see the game and just looked at the box score you would have thought we played solidly all around.

Offensively it felt like they were in rhythm. The play calling felt like it was more "get some reps" for Hooker than a more traditional game plan. They were as explosive as they've been in a while, even with some dropped passes for big gains.
15 plays of 15 yards or more inc. a pass interference

Hooker had a great game and got the necessary reps to prepare him for the meat of our ACC schedule...and btw the near one handed catch by McCleese should be on Sports Center even though his foot was out of bounds.

That was an amazing catch.

I thought his feet were inbounds on the catch. I think the problem was his back foot touched the line prior to the catch and he did not re-establish.

Was it? The replay in the stadium looked like it was in.

Would love to see hazelton catch some of those passes. They weren't all easy but he's more than capable. Could have felt a lot more like a blow out with those catches.

Excited for the offense with a healthy Turner and Patterson.

And mostly, I was very happy to see Hooker throwing deep, throwing from the pocket, showing he can get it done and coaches trust him with the whole playbook including Go routes and deep posts - forces future defenses to defend the entire field and know that we're not purely dependent on misdirection / over-pursuing defenses like Miami.

I know some folks aren't thrilled with the final score but 2 things factored in:
1) RI can't stop the run, at all. Huge holes opened up for our RBs. I wonder if we had a QB with more game experience, if the coaches just pound RI into oblivion. But I'm guessing the coaches wanted HH to get more experience as a passer.
2) Fuente mentioned in the post game that RI was slowing down the game and chewing a lot of play clock to try and keep it close.

The defense...
- yes, better than last year but majorly concerning
- hard to figure out why we can't put it all together. DL has been good enough, LBs and nickel may be borderline elite. Are the corners and safeties really struggling that much? I can't understand why it seems we're less than the sum of our parts on D.
- between Miami and ODU Q4, Duke and RI 2nd half, and BC Q2... we continue to have these stretches where D looks awful. At times, they've played extremely well. But these other times - we're seriously gonna struggle if this isn't addressed. The O is playing well but not well enough to win shootouts vs ACC competition.

They picked on Waller an Quillen a lot today. But Rhode Island has 2 decent receivers and a QB good enough to throw then the ball, and those parts of their game showed up, the rest of the team didnt look good and our rush defence and offense showed up. Still not good with UNC next week, cause they have a QB that is better.

Glad to get the win. disappointed there was a point in the game where I was a little on edge.

Hooker looked good in his passing. I can't remember one head scratcher of a throw. Some a little high but they were caught. Hail Mary was nice minus the fact that it was out of bounce. Would have been to get before the half.

OL is young I guess, teams get a lot of pressure. I think Hooker delayed scrambling some to work on passes. There were times that it looked like an open lane for him to pull it and go but he held on sometimes for the sack.

Running game did look good, however it was against RI who has a porous run defense. Hope King is ok he came up favoring his shoulder on this last carry.

Glad we could stretch the field w/o Turner and allow him and others who are nicked up to get some rest.

Not sure what's up with our defense. 1st half of Miami looked like the LPD. 2d half through majority of this game not so much. It's concerning that it's third down and we can't get any pressue multiple times and they continue to hit the slant. Our one really good pressure where we did get a sack and pin them back on around the 2 was negatted by a penalty.

I don't think we've seen a full game from this team yet and thought we would against RI. Its frustrating to have these games where backups should get significant playing time to come down to the last 5 min of the game where it's comfortable.

I honestly think it's gonna be tough to get 6 wins this year. Despite how tough the guys may play the defense just isn't good enough to hold opposing offenses in check. We need three wins and I don't know where they are going to come from.

Can we get that McClease "catch" in GIFtory?

I'm going to go ahead and guess that's a no?

Happy to get a win FAM! Enjoying the positive vibes in this thread!

Its pretty crazy that Rhode Island has a better o-line than UM.

FAM! Any ball thrown near Keene, he freakin catches it!

FAM! Once Hazelton gets there, we're gonna be frickin deadly on offense!

To quote Samuel L Jackson, one thing I liked seeing near the end of the game was, "Gary, Gary, Gary...."

We are a two loss team until proven otherwise!!