Virginia Tech's athletic department reported revenue of more than $96.7 million during the 2019 fiscal year, according to the NCAA Membership Financial Report.

That's down from the record $98.4 million it generated in 2018, but the department reported a surplus of funds — $2.8 million — for a second straight year

Agree - in 2018, VT Athletics earned just over $22M in donations - There's no way that our Athletic department could sustain a $17M loss and finish with a $2.8M Surplus. Given this, and the context of the quote, I think it's a fair assumption that that $5M in donations is a subset that was given directly to VT football.

My sentence about the $5 million followed a sentence specific to football. I assumed the context didn't need to be repeated. Sorry for my lack of clarity.
So, yes, I was speaking only to football income.

OK, understood. Going down that line of discussion, if the HSF didn't exist, or fans were allowed to donate to any Hokie Club fund to get priority for football tickets, I think you'd see that donation # associated with football go way way up. Most VT sports fans are football fans first and prioritize football success. Basketball would draw its own share of donations, but I think football would be solidly in the $10-15 million range. Still less than ticket sales or licensing, but not as dramatic a difference.

I'm looking forward to the days I have $2.8 mm surplus annually...

I have to assume that with the late launch of the ACC Network that it doesn't play much of a factor at all in these numbers? That start up costs dragged these numbers down? Is more to be expected in future years because of the ACC Net? Methinks I need better in depth coverage to explain this ..........

The Virginia Tech Fiscal year is from July 1 (2018) to June 30 (2019), and the ACC Network launched on August 22nd, so I wouldn't expect any revenue from the ACC network to be included.

My research from using the googles is that we should expect to see a ~$10M/year bump in next (fiscal) year's report.

Don't forget Athletics has to pay the university back the loan for building the ACCN infrastructure on campus. So that total will go down for money going to the sports pot.

Not quite true - repaying the university (or, repaying any debt) would be classified as an expense; it shouldn't impact revenue, just spending.

Having a surplus just for the sake of having a surplus isn't always a great idea (not saying that this is a bad sign either). Would love to better understand how Whit uses this 'extra' money - is it put in a 'rainy day' fund or is it allocated immediately? Does it pay off debts, or go towards growth?

I don't think there's necessarily a right or wrong answer, but in a year when our cash cow sport had a staffing shake up, and our head coach seemingly made a leverage play for additional support staff, it does make you wonder where that $2.8M was 3-4 months ago.

socking it away for a potential contract buyout?

I'm happy we're in the black and not the red, but with all the talk about the fans needing to increase donations because the athletic department is in trouble, I would've thought the financial situation would've been terrible. Instead we have extra money. Hmmm 🤔

I know we need more money to compete with the blue bloods, but something doesn't add up for me. If Whit were smart, he'd have a marketing plan in place to show why even though we have a surplus, we still need more money. Since the Hokie club can barely time their emails appropriately, I'm not expecting a well coordinated effort. That's disappointing because I fear the less engaged fan will read the headline and then not donate.

To be fair, it looks like a big chunk of the surplus might be that Mike Young spends less money than Brent was....

I 100% agree and men's b-ball was the first thing I thought of when I saw the headline.

My point is that, the athletic department with Whit as the AD needs to message this better. I work in software, so I'll use that example. If a release is early, late, has more or less features, etc, my company comes up with a messaging plan. The training, support, product, marketing departments, etc come together and craft a unified message. Sometimes it's a positive message and sometimes it's negative, but our customers always know where we stand. That is what I'm asking of VT athletics. You have a surplus, what does that mean to me? I think Whit probably wants us to donate more, but he hasn't said and hasn't provided the why. Adults do not enjoy doing things unless they know the why. That's a lot of what marketing is and I don't see VT athletics being smart about that.

TL;DR: VT Athletics needs to be better about presenting a message that will encourage donations. Also, please get us better licensing deals!

Can't argue with Buzz's results though. Probably the best basketball coach VT has ever had.

This surplus does not include recent changes to the football program staff, or basketball staff.

EDIT: my bad, you're not missing the point, you're just calling out the messaging problem.

If Whit were smart, he'd have a marketing plan in place to show why even though we have a surplus, we still need more money. Since the Hokie club can barely time their emails appropriately,

Not-so-fun fact: Hokie Club does not have a marketing department. Frankly, Whit did not inherent an athletic department built for the modern day college sports. I think it's going to take time to put out all of these fires; it's a little bit of a chicken/egg problem. 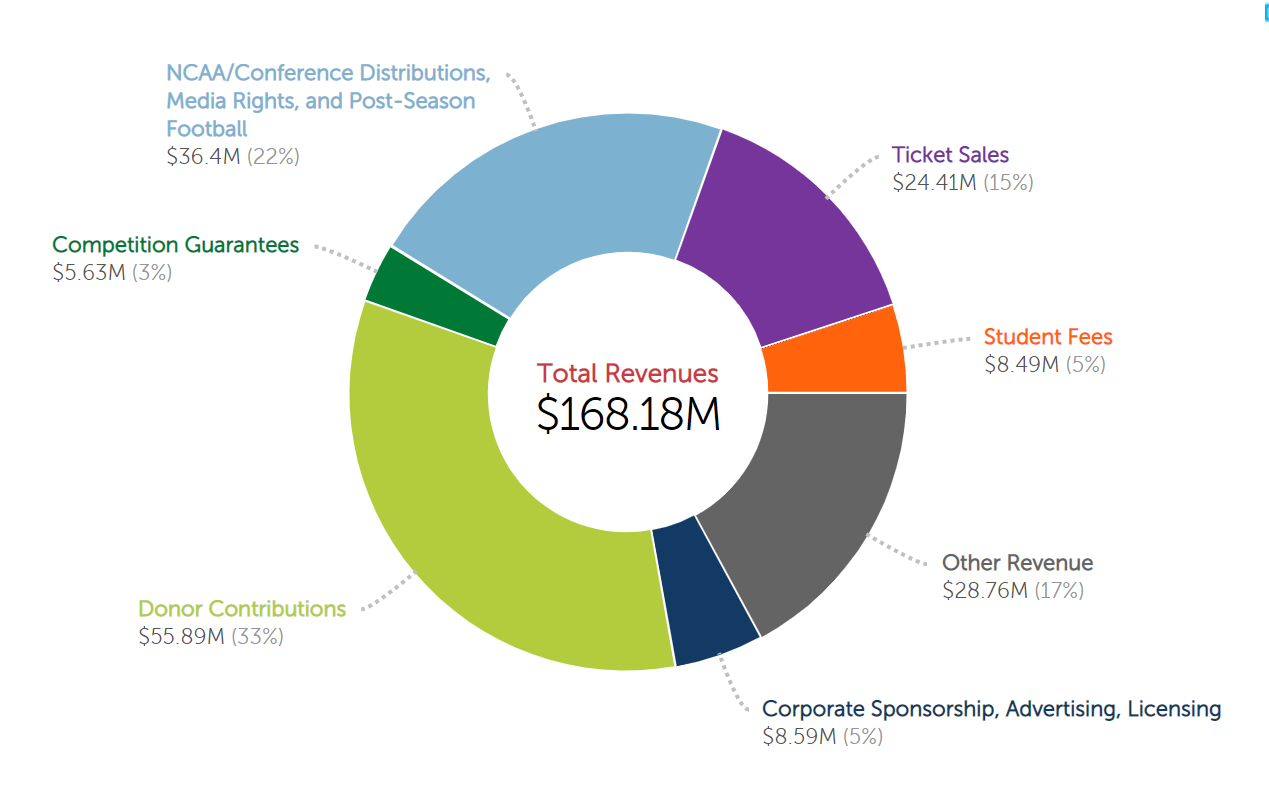 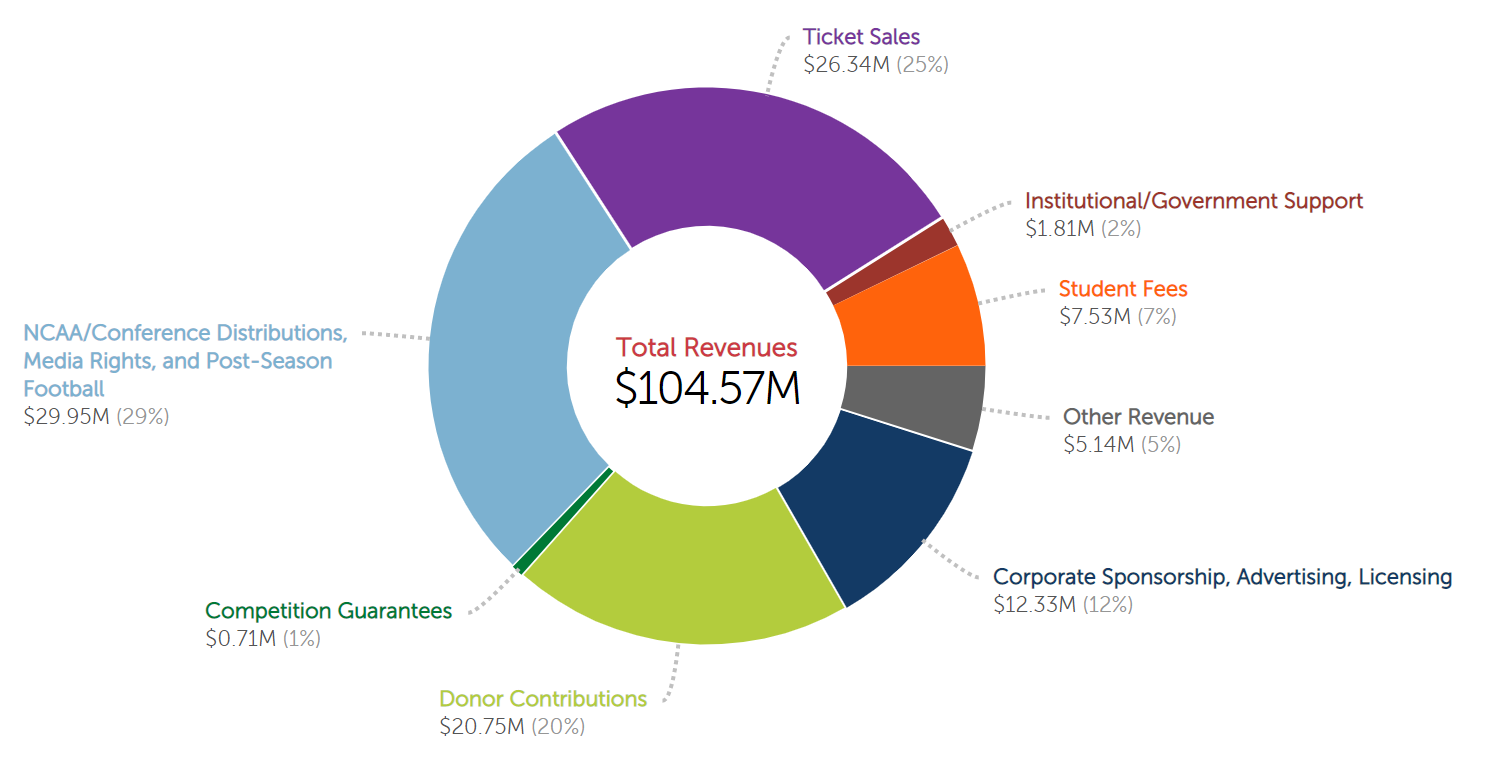 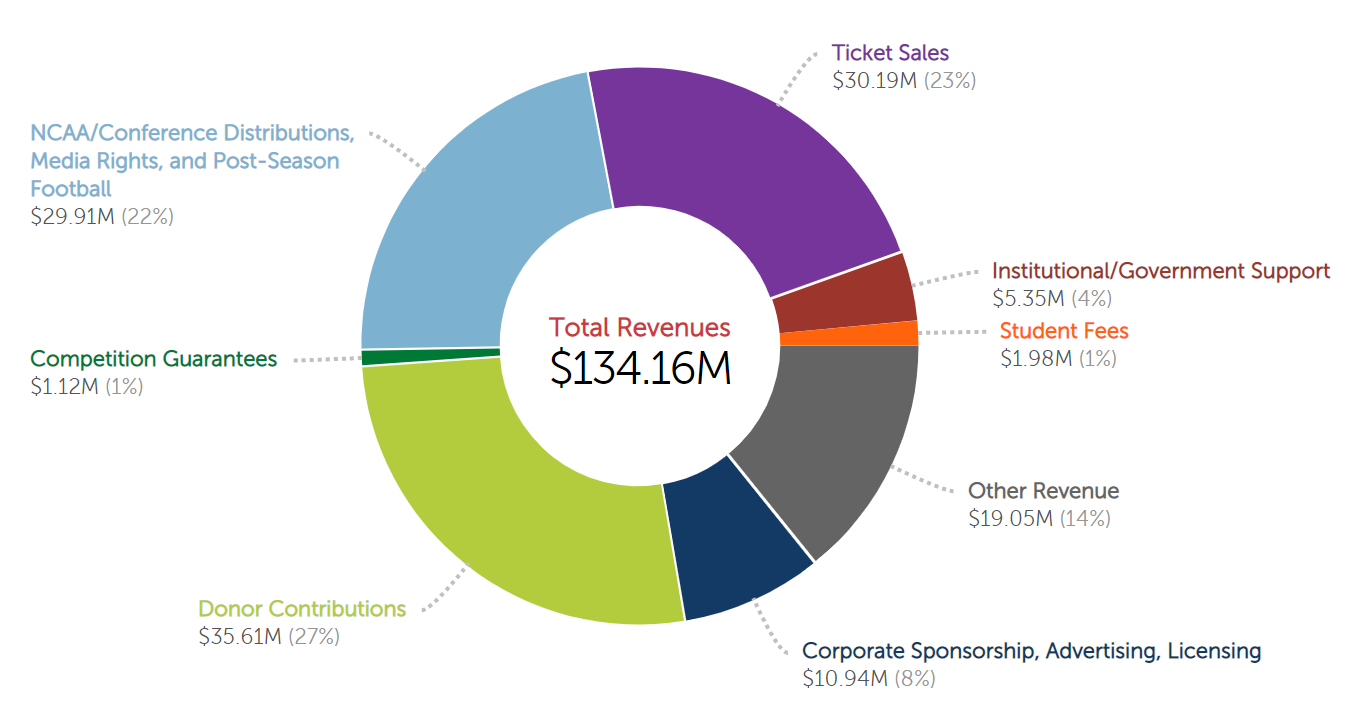 My takeaway from this is that we are way behind in Corporate Sponsorship, Advertising, and Licensing.

Someone tell Delta Dental to open up the checkbook.

My takeaway from this is that we are way behind other ACC Schools in Corporate Sponsorship, Advertising, and Licensing.

FIFY. Interestingly, of these schools, FSU is probably the most comparable to us from a licensing standpoint. They're a Nike school. UNC is Jordan Brand, and UL is an Adidas school (I think). Here's a good (albeit slightly dated) read on how far behind our Nike deal is - It brings in less than $2M/year, bringing in less that Texas Tech, Minnesota, Washington State, and a variety of other schools who we believe to have a weaker brand than VT.

That said, it's also really difficult for any apperal company to license VT gear. Recently talked to someone at Homefield Apparel about this - not sure if this is due to our Nike contract or something at the university level.

Let's rehash the Nike deal for the one millionth time please. I'm not sure it has been discussed enough the last 6 years.

Seems like the perfect place to discuss it to me.

Thanks for providing the data. You're correct, my issue is the messaging for this and most other things related to VT athletics. I know Whit didn't inherit a modern college athletics department, but he's been here for 6 years and I don't think it's unreasonable to be asking that he have a well crafted message by this point in his tenure.

he's been here for 6 years and I don't think it's unreasonable to be asking that he have a well crafted message by this point in his tenure.

Yea, that's fair criticism. I think this is the one major thing Whit has mishandled in his tenure, but I understand how it happened.

I think Whit's original plan was to sell optimism and a bright future by focusing on the Drive for 25 campaign. In 2016, it looked like a great plan; The Fuente hire was almost universally touted as the best hire of the of the offseason, and things looked great.

What's changed in the last 2-3 years was (1) the cable bundle bubble burst, (2) the broadcasting rights for the SEC/B10 skyrocketed in price, (3) VT Struggled. Regarding 1 and 2, everyone knew that the ACC was getting to into the cable broadcast game late, but I think most of us thought we were losing out on 'just' a few years of additional revenue; I don't think many of us thought the average ACC team would trail the average SEC team by ~$40M/year in TV revenue.

Now the messaging has to change. VT fans have to understand that the landscape has changed, and that to compete, we have to donate more. Until our Nike contract ends in 2022, OR we decide to switch to a different conference, I don't see any way to increase revenue other than increasing donations. It's going to take time and tact to deliver this message to a Virginia Tech fanbase where many donors 'don't think recruiting matters.'

Until our Nike contract ends in 2022, OR we decide to switch to a different conference, I don't see any way to increase revenue other than increasing donations.

Short of the ACC dissolving entirely, a majority of schools creating a voting block to reverse course, or successfully filing and navigating a major lawsuit against the ACC, it's untenable for us to switch to a different conference due to the Grant of Rights all of the ACC schools signed in 2016. The ACC owns the media rights for VT (and every other ACC school) through 2036. Under the GoR, even if we moved to the SEC, the ACC would still own all of the media rights for VT home games (which obviously also makes us completely unattractive to the SEC in the first place).

Yep - I agree that leaving the ACC is not feasible. Meaning that we need fans to donate more.

Why is our blue section so much bigger than UNC's? Does the Belk bowl really pay us $6.3 million more than the Military bowl paid them? I would think that everything else in that category should be equal if it's coming from the ACC and media rights.

Also, does Louisville and UNC's basketball really make that much in ticket sales to be outgaining us by such a large margin? I would think that we trump both of them in football ticket sales by a long shot

Why is our blue section so much bigger than UNC's? Does the Belk bowl really pay us $6.3 million more than the Military bowl paid them?

To be honest, I'm not sure. Remember that VT's 2018 fiscal year is from July 1 2017 to June 30 2018, so that would mean would be looking at revenues from the 2017 football season where VT played WVU on ESPN and played in the Camping World Bowl. UNC did not make a bowl game that year, and finished with 3 wins. I thought that ACC profit sharing split all bowl game money equally among the conference members, but perhaps bowl money is only split among conference members that make it to a bowl?

Also, does Louisville and UNC's basketball really make that much in ticket sales to be outgaining us by such a large margin? I would think that we trump both of them in football ticket sales by a long shot

Gotcha, did not take into account that those numbers weren't from this past season so that could make sense with them not going to a bowl plus us having the WVU game.

Anyone know if these numbers are adjusted for inflation?

Where are concessions counted?