Binghamton's dual record last year was 10-3 (8-2 EIWA) which placed them in 3rd within the Eastern Intercollegiate Wrestling Association, during the regular season. The BearCats would fall to 6th when finished competing in their conference tournament though. Binghamton has lost lots of fire power and injuries have turned this years squad to being young, with two upperclassmen in the lineup. One of those upperclassmen is the only BearCat wrestler that is ranked: 184lber Lou Deprez (#6). Two of the four losses have come against ranked teams: #5 NC State and #12 Lehigh; while one of their wins have come against a ranked opponent, #24 South Dakota State. Coach Borshoff is a young coach, going into his second year as head coach of Binghamton, but its his four year on this coaching staff. He was actually hired in December of 2017, so midseason, due to the previous head coach resigning for personal reasons. Kyle Borshoff's other coaching experience is being an assistant head coach at his alma mater, American University. Because his experience is so little, he does not have many accolades as a coach. He did send a Binghamton best, six wrestlers to the NCAA tournament for the 2018-2019 season.

Borshoff's coaching record stands at 21-12 as of right now. Personally, his collegiate wrestling record is 102-39 where we wrestled for American University between the years 2007-2010. He was a two time All-American.

125lbs: Carson Sauriol (FR, Poway CA) or Audey Ashkar (r-JR, Liverpool NY)
As of now, Sauriol is the starter at the lightest weight. A true freshman who has wrestled in all but one of the BearCat's duals. His record is 7-10.

Ashkar was the starter last year, and started in the first dual for Binghamton. But he has not wrestled since mid-November and there is no news as to why. I highly doubt we will participate, but its worth noting anyway. His overall record is 50-27.

133lbs: Tommaso Frezza (FR, Buffalo Grove IL)
Another true freshman that is going through growing pains. He is 1-11 thus far. Frezza was thrust into the line up when previous starter, and NCAA qualifier, Zack Trampe sustained an injury in late November.

141lbs: Anthony Sparacio (SR, North Babylon NY)
A former transfer from Long Island University. He qualified for his first NCAA tournament last year, going 0-2. This year his record stands at 15-9, and VT's Mitch Moore has previously defeated him. His overall record is 55-28.

149lbs: Matthew Swanson (r-SO, Lynbrook NY)
Swanson is the incumbent starter at 149lbs. His record currently is 4-9 while his career record is 19-34.

157lbs: Chris Barker (SO, Fairport NY)
Barker has yet to take a redshirt, so he has been the starter at 157lbs in both of his collegiate year. His current record is 5-12 and his career record is only 17-25.

165lbs: Jacob Nolan (FR, Saranac NY)
Nolan is now the starter at 165lbs since Aiden Montiverde became injured at the Southern Scuffle. He has held his own, having a 2019-2020 record of 9-8, but has yet to win a dual match

174lbs: Alexander Melikian (r-JR, Mohegan Lake NY)
The other upperclassman on the roster, Melikian has bounced around the weight class of 197lbs down to 174lbs. He has finally broken the double digit win mark this year as he is currently 10-8. His overall record is 29-51. 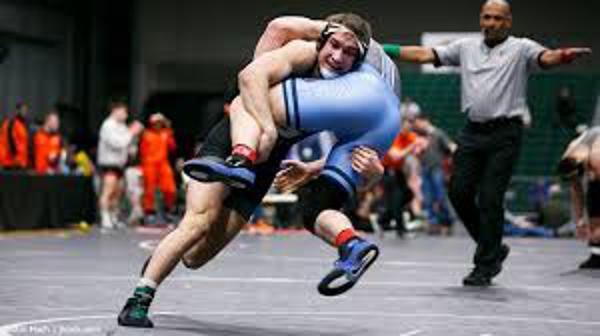 184lbs: #6 Lou DePrez (r-SO, Hilton NY)
The best wrestler on this Binghamton roster by a long shot. He is 16-5 on the season with one of those losses coming to Virginia Tech's Hunter Bolen. He is this year's Southern Scuffle champion. He qualified for the NCAA tournament last year, finishing 3-2.

197lbs: Sam DePrez (FR, Hilton NY)
You guessed it, the little brother to Lou DePrez. He took over for Nunzio Crowley after his injury. His current record is 3-7 and has yet to win his first dual

HVY: Joe Doyle (r-SO, Richboro PA)
Last year, Joe Doyle just missed the NCAA tournament and is on the hunt to qualify for 2020. He is one of the few that has a winning record on this line up, going 12-8 this year and 47-37 for his career.

Virginia Tech goes into this match with six ranked wrestlers, but the numbers have changed: #12 Joey Prata (125lbs), #18 Mitch Moore (141lbs), #19 BC LaPrade (157lbs), #3 David McFadden (165lbs), #2 Hunter Bolen (184lbs), and #17 John Borst. There will be no changes to the line up, it will be the same as last week. Obviously everyone will be focused on the rematch of Bolen and DePrez. Other than that, look for the least skilled wrestler to pick up wins and everyone else tune up their technique. I see Smetlzer getting back on the win column, and Andonian making a statement win. If you didn't know, Hokies' coach Tony Robie started his coaching career at Binghamton so it will be sort of a homecoming.

This is gonna be a blood bath as Binghamton is to young, not as skilled, and has injuries in it's line up. Weights 125lbs thorugh 165lbs, for Virginia Tech, could all get bonus points so it was tough to predict final score. Either way, Binghamton is gonna hang a donut. I'm very confident that Bolen will handle DePrez like he did at the Midlands. Other than that, it should be an easy match before the Hokies travel to Cornell the following day. Yours truly will be at both matches now that I live in central New York. So I'll be able to give matside updates.

Thanks for the write-up and look forward to your matside updates. Hope freshman Andonian can continue getting those bonus points. #2Bolen gets a good test going against #6.

I know this isn't your first time doing one of these but in case I haven't made it clear before, you're doing a great job with these previews and deserve major props.

I wish I could watch this weekend's matches on ACCN but I'll be following closely on Twitter. Most important thing I'm hoping for against Binghamton is for Bolen to add to his resume for a top 3 seed and for the borderline NCAA qualifiers not to suffer bad losses. It's especially important for Andonian, Hughes, and Borst to win (although given the poor records of Binghamton's wrestlers at most weights, almost any loss would be brutal). I'd love for Smeltzer to get a win and continue to show improvement but if we have to take a loss, 197 is the least damaging place it could happen.

Thanks, I appreciate it! I'm just trying to shine a little light on a non-revenue sport I love.

Plus I want to add some content to a wonderful website. Cause Joe and the staff do a great job on what they cover, with what resources they have. So this my way of helping, even though it's probably not perfect.

So I hope these posts provide some insight and generates discussion. Especially since I'm not the best writer and wrestling info is hard to come by.

Nothing to offer but my thanks for keeping us in the loop.

trying to shine a little light on a non-revenue sport

And that you are! This is awesome! Robie and staff are killing it on the mat and recruiting. I said this before that the FB staff should take recruiting classes from them! This young team is going to grow! I'd like to see Borst become the next Ty Walz.

And guess who comes back next year as a soph?

Interesting that you bring up recruiting because I've given it some thought and wouldn't be surprised if Vance Vice has had success recruiting due to a similar approach used by the wrestling staff. The most common overlap for football players and wrestlers is offensive lineman after all. Ultimately I believe those coaches have had success selling a cultural fit with Virginia Tech to athletes with a blue collar, outdoorsman type of mentality.

This is a question I have always had. How do non-revenue sports travel? If the FB team has a game in Boston they fly. If the wrestling team has a duel against Central MI U do they take a 15 hour bus ride? Uber? /s

Prata with the 11-4 decision to start things off.

Way to go Joey! Gerardi will take a forfeit. Good guys up 9-0

Mitch Moore wastes no time in getting that pin!

Mitch with a first period pin.

Mitch with a pin over Kelly. Lots of different names than I expected today

Freshman does it again! Pin for M.A.
edit. B.A.

Hey VPI, how'd bryce look? sounded like he was riding the guy pretty good and finally got the 3rd period fall.

I'm gonna give it to the bearcat wrestler, he was aggressive in the first and Andonian had to play defense.

But after that ride out in the 2nd, you can see how tired the Binghamton wrestler was. Made it easier for BA to go to his offense

B.C with the major.

DMac absolutely toyed with him. Didnt let him get close to edge unless he bulled him into it. These are the most embarrassing wins

Anybody got a place I can at least get live updates on the results? Didn't see it on Hokiesports, but I might just be dumb.

And trackwrestling.com. They will show the scoring in each match

I figured as much as soon as I saw the B-Team come out today for Bunghamton (pun intended). Boshoff seems like hes trying to improve his wrestlers records for his conference tournament

Smeltzer with the major. Clear message from the coaching staff to get bonus points today. Stan worked hard in the 3rd period to grow his lead

Wish our FB team scored like the wrestling team!