How do the Hokies rank among the most successful college football programs. 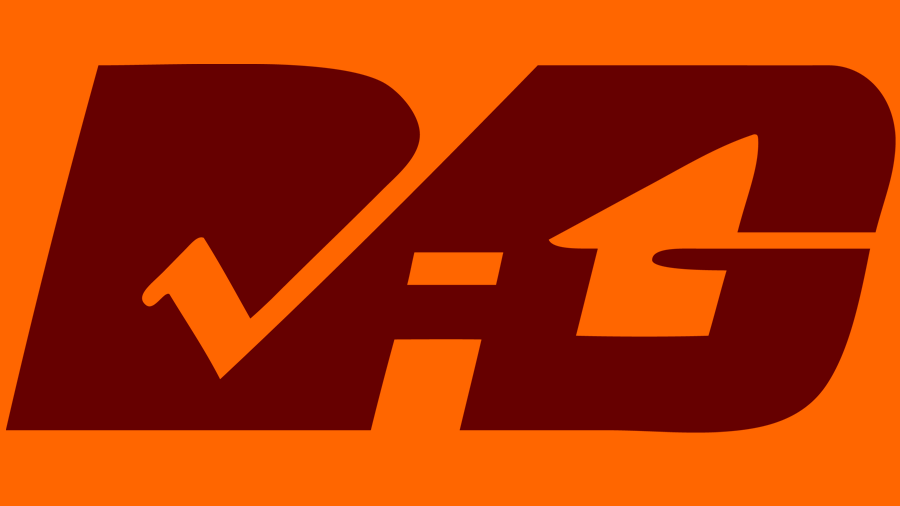 The Big Eleventy Conference is an exercise to isolate the most successful FBS programs over a 20-year period, and to extrapolate further comparisons among those teams. The Big Eleventy uses a completely made up number in its title, which seemed fitting.

The admission threshold is simple: Teams ranked more than half of the past 20 seasons are in. 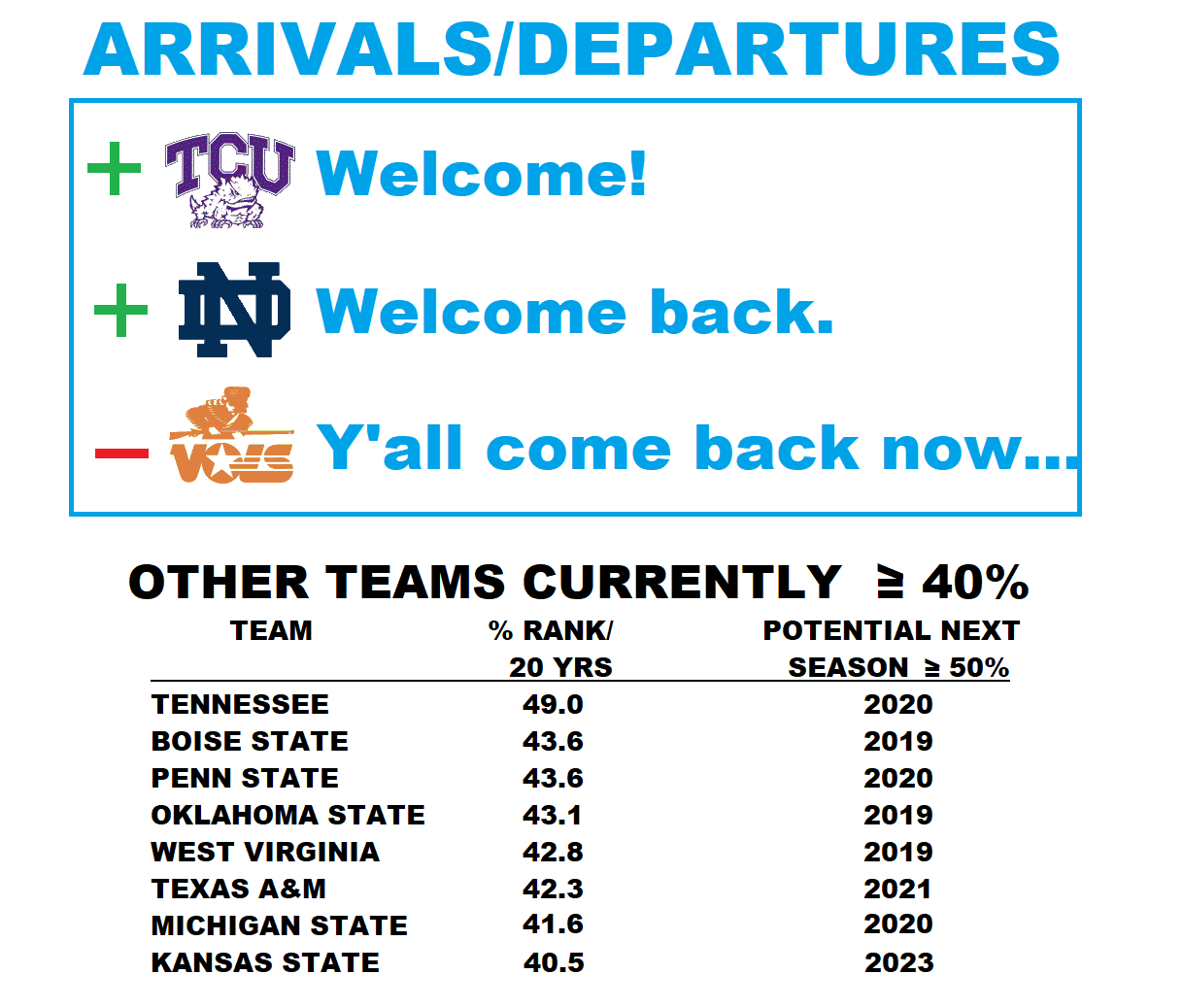 Top ten comparisons are now included along with Top 25 (ranked), Top 5, and No. 1 ranking comparisons. 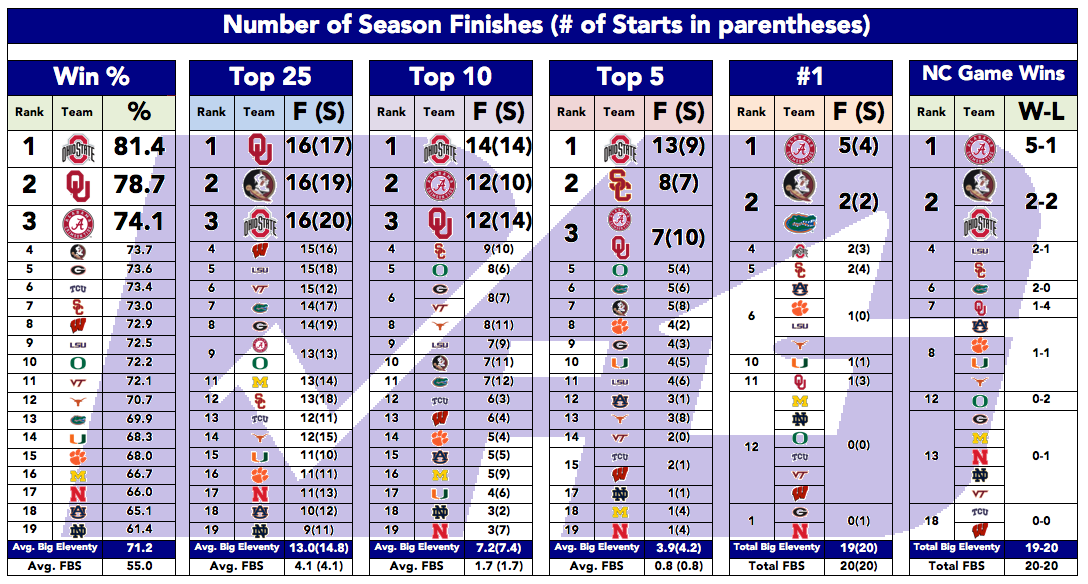 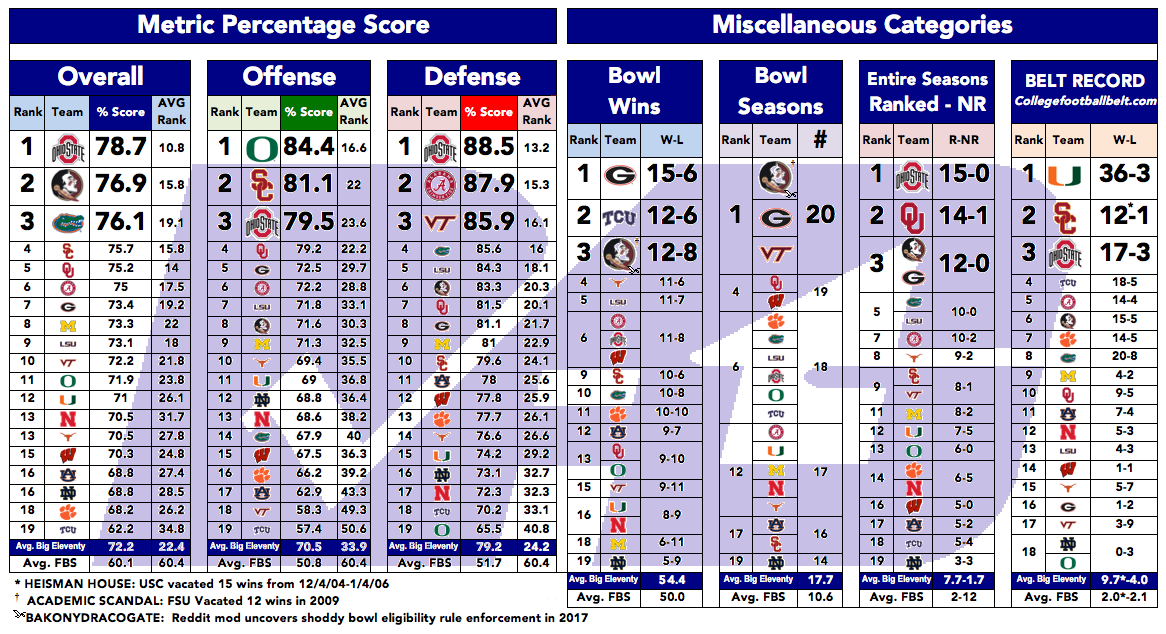 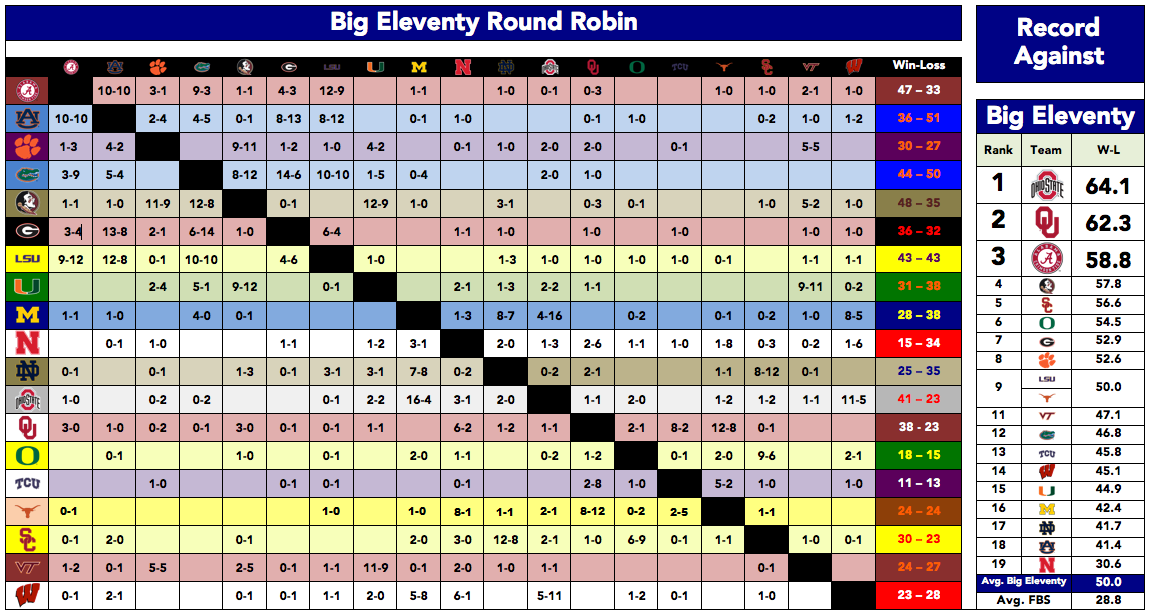 This season I decided to give a crack at including metric comparisons for offense, defense, and overall team rankings. Currently, only the Simple Ranking System (SRS) goes back before 2003; from there Bill Connelly's S&P (Five Factors) and Brian Fremeau's Efficiency Index (FEI) are available.

Simply comparing average rankings across each metric might have sufficed for this project, but I wanted to be able to compare the actual scores across the different metrics as well.

Relating the scores seemed like a math problem I could handle. I went to work rescaling each metric model to get a 0-100 score and then averaged the yearly totals.

Every metric exhibits the same behavior across its scale. The top and bottom team ratings each year can be a little erratic. The closer to the middle of the rankings you get, the more stable the numbers get. What I tended to see every 25% of the rankings was a scale that ran on a basic 3, 1, 0, -1, -3 curve.

Since all of the metric values I used behave in this way regardless of the actual numeric scale, I derived equations to give them all a 0-100 value. I then averaged them out for the years available. (Once the S&P and FEI rankings were both active, I phased out the SRS numbers.)

Converting the scales in this manner does mean that in some seasons an exceptionally good offense, defense, or team might get a score >100 (or negative, although none of these teams run into that). Some seasons, nobody gets a 100 in a category, too.

If this is difficult to see in words, here is a visual display for metric "scores" rescaling to a 0-100 scale.

The mathematical formulas for the FEI value and Offensive SRS (OSRS) value are shown below in the Excel spreadsheet for those who work best with equations.

My experience with the Mcubed.net metric ranking

Most available metrics do not have data all the way back to 1997. So when I discovered another metric (Mcubed.net) that went back past 20 years, I was very excited.

I hadn't come across this metric before, so I was a little curious why it wasn't widely used. After a little exploring, I discovered mcubed.net is run by Michigan fans. (Edit: As historyhokie pointed out, it is not.) I actually ran a test to make sure the purpose of this metric wasn't an effort to make them look better than their rivals. It passed with flying colors, actually. Ohio State averages better rankings in this system than even Michigan does.

But I was pretty lucky to pick an arbitrary starting point of 1997. In that season, Michigan won their last national title, soured somewhat by the Coaches Poll crowning Nebraska its champion.

In 2002, the website mcubed.net was spawned, complete with a cherry picked metric that displayed that they were better than Nebraska that season. The only other metric with data for that season (the SRS) suggested that FSU was the No. 1 team, followed by Nebraska at No. 2, and eventually No. 5 Michigan.

Verdict: I choose to pass on the mcubed metric; it appears to be a cherry-picked data point for Michigan fans to use for their 1997 national title claim. Still, Danny Coale caught the damn ball.

The best thing that ever happened to Michigan is that they didn't have to play 1997 Nebraska, because they would have gotten wrecked.

In other news, love seeing us 3rd in defense. Bud Foster really does have a solid argument for goat status. Too subjective a topic to ever have a clear best, but to be as good as he has, for so long, with substantially less talent really is mind blowing.

I think it's telling that when our defense drops out of the top ten a portion of our fan base has a really hard time with that. It's nice to be spoiled.

All I see is BAG when I look at that first image.. I was like "I have been signaled"

then I read it half ass and have to go back and read it again cause it was good stuff.

Same. I thought you had your own feature recruiting column or something.

Whoa, I did not see that. Although I was previously familiar with this little gem: 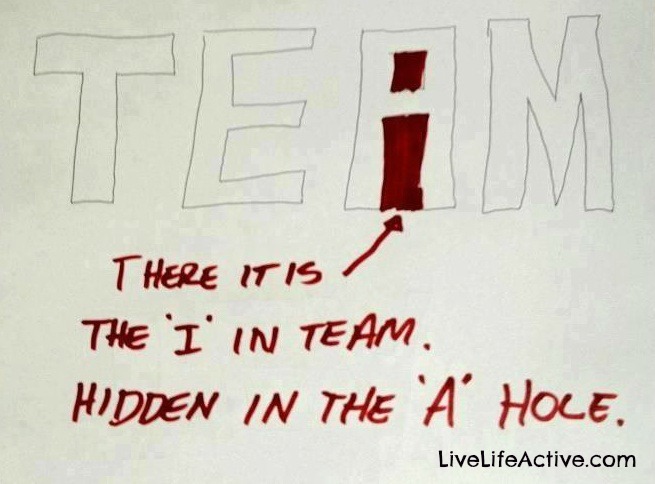 So what your saying is Tennessee disapeared from the Eleventy First Birthday conference?

So this'd be a Vols fan right?

Yea it checks out.

I feel like these stats paint a more dominant picture of VT football than even my perspective (through O&M glasses) allows. We should be selling the hell out of this to recruits that are between us and schools like UVA UNC UMD NCST WVU and even PSU. I know recruiting is a lot of what have you done for me lately... But this definitely shows that we have (or have had) a seat at the big boy table.

Don't need to oversell it.

Easier to sell an excellent AD and coaching staff, improving recruiting classes and more wins, which I think are on the way (and even already here).

Probably wise to be balanced and realize that the team we have been for the last five years isn't the team we were the previous 15 but these stats still show us as roughly the tenth best team of the last 20 years... That ought to help sell us over our regional competition and it should help keep us from being big-timed by the blue chippers.

Certainly doesn't hurt our case, but I'd rather just beat FSU, Miami, and Notre Dame this year...

Are there any TKPers who also post on /r/cfb? Would you mind posting this over there if you think a broader audience would enjoy it. Believe it's bad form for me to create an account to share a link from my own site.

So many of us.

It's having trouble gaining traction at r/cfb the moment for two reasons.

1) People are more likely to review statistical analysis if they are in the body of the reddit post, it's unfortunate but the most popular ones are always formatted so they don't require being linked to another site.

2) The title of the article does not make it clear that it's an advanced statistical analysis spanning multiple topics over the last 20 years. This is incredible content, but the title isn't creating a clear picture of the content.

I think the title will draw in fans of the B1G, as they'll believe it's related to their conference, ..then maybe they'll stick around for some fun facts and figures.

Reddit titles don't have to be the article title, could have easily included "Statistical Analysis of the 20 Most Dominant Teams of the Past 20 Years" or something like that

I didn't post the article, but this was my line of thinking as well.

so then who's been spamming links to TKP under the handle, TotallyNotJoeLanza?

man, that is some high quality gif right there

Bud Foster is incredible. I mean I knew that, but this is just another graphic showing it.

I spent quite a bit of time looking for an "about" page; I even found the page that breaks down the metric computation (although I still don't know how to click to it from the site).

There is a "mcubed.mich.edu" and I guess that's where I started coloring outside the lines. Some of my Wayback machine and Google searches turned up domain info; at some point I must have been looking at one with the Michigan domain and figured I had it solved.

Sorry :( I came across it totally by accident. I think he tries to remain semi-anonymous as to not blur his professional life with his personal life. I write bar trivia questions as a side gig and occasionally use that site for reference material My friend shared a Facebook post from his dad from the site a few months ago so I recognized it. The guy's initials are M M M, thus the name M Cubed.

Problem is you aspire to be Nancy Drew. Members of the Hardy Boys Club know how to find raging clues.

Minor thing, in your top table, the Record Against section has the far right column labeled W-L, which would normally be used to show a record, but the data given is likely a winning percentage.