After subpar performances at Wake Forest and Syracuse, Virginia Tech bounced back in a big way in South Bend without Tyrece Radford. What does this mean for Saturday’s game vs. UVa? 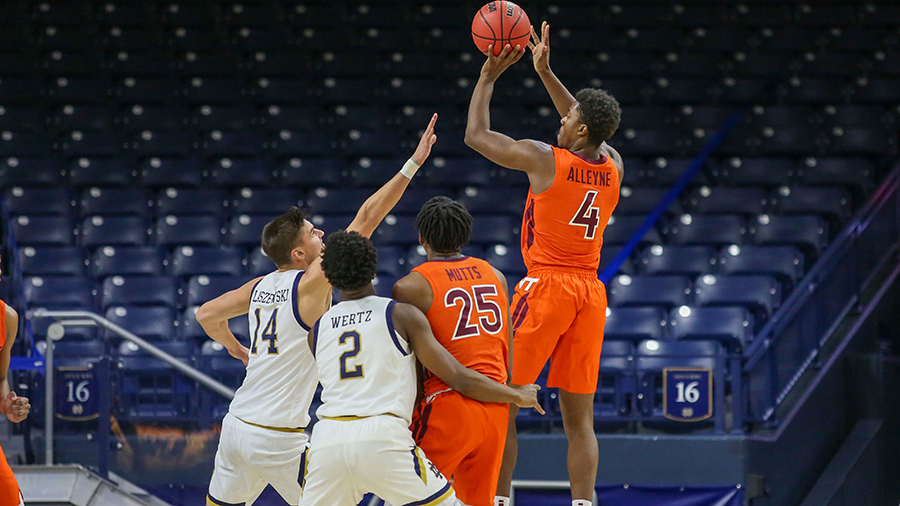 Virginia Tech wasn't great in its win over Wake Forest on Jan. 13. It was a similar story in Saturday's loss to Syracuse.

To add insult to injury, news broke on Monday that Tech guard Tyrece Radford was indefinitely suspended. The Baton Rouge, La. native was second on the team in points, rebounds and assists per game.

The Hokies were on a two-game skid that left Keve Aluma and Jalen Cone sideways. Two of Tech's leading scorers tallied just ten points and made only three of 29 field goals. Tech needed some answers, and on Wednesday night it found some.

It wasn't the highest scoring or prettiest performance, but the Hokies locked Notre Dame down, crashed the glass and scored the ball ever-so efficiently.

"We played really well defensively and rebounded again," Virginia Tech head coach Mike Young said. "I thought that was the difference in the game at our place and same thing here today.

"We're not playing very well offensively. ... You've heard me say it, defend and rebound and we'll have a shot night in and night out. We got a really good offensive team, we're just stuck in a gear here and we'll figure that part of it out."

They didn't regularly connect from deep either, hitting just seven of 25 (28%) from behind the arc.

"They scored 62 points on 40% shooting," Notre Dame head coach Mike Brey said. "That's about as good as we're going to do defensively. We have to go to Pittsburgh and be better."

Despite the percentages though, the Hokies were led by an efficient quartet.

On the outside, Nahiem Alleyne had arguably his best game of the season with 15 points (7-14 FG), nine rebounds and five assists. Hunter Cattoor dropped in 13 points (4-9 FG, 4-7 3FG), grabbed three rebounds and stole the ball three times, too.

"We're going to have a couple games going down the stretch, I hope, when Cone, Nahiem and Hunter are all shooting it really, really well," Young said. "Then you combine that with two guys in the post that have great hands and are really strong through the air athletically and it makes for a pretty good inside-outside combination."

"I think it [being able to score from all over the court] makes us dangerous," Mutts said. "I think that's part of the reason why we're going to make a huge run this year. We have so many guys that can pop off at any night."

The four scored all of Virginia Tech's points against Notre Dame outside of two three-pointers from Wabissa Bede and Cone. What's even more impressive, though, is that Alleyne was one rebound shy of the Hokies having three players with a double-double in the same game, a statline that's never occurred at Virginia Tech.

It's the first time that two Hokies have recorded a double-double in the same game since Radford and Landers Nolley accomplished the feat on Feb. 19, 2020 against Miami and the 18th time since Tech joined the ACC in 2004.

Virginia Tech didn't win the game on the offensive end, however. Despite a below average shooting percentage, the Hokies came to play defensively.

In Cassell Coliseum on Jan. 10, the Hokies held Notre Dame to 37.5% shooting, including an incredible 10.5% in the second half after allowing the Fighting Irish to hit 55% in the first.

Unlike the previous meeting, though, it was a full 40-minute defensive performance from Tech in South Bend. The Hokies allowed the Irish to shoot just 36% from the field and 17% (3-18) from three-point land while holding star Nate Laszewski (avg. 17 ppg) to just seven points.

"They are physical in the lane offensively and there was nothing close to any type of offensive rhythm because of their defense," Brey said.

"Laszewski is a really good shooter and if you don't switch when he sets ball screens, and he sets a bunch of them, then he's going to spread out away from the ball and they'll throw it back to him and he's going to make it," Young said. "I can't tell you how many games that I've watched and he's made four or five threes. I think he only took one in our first meeting. ... Laszewski did not attempt a three so great job from our team."

Tech really limited Laszewski (3-4 FG, 1-3 FT, 10 rebounds), so much so that he turned the ball over five times and drew four fouls. With the Jupiter, Fla. native effectively a non-factor for most of the contest, Prentiss Hubb took charge, scoring 22 points (8-20 FG, 3-8 3FG), grabbing four rebounds and dishing out three assists.

His solo effort wasn't enough to upend the Hokies, though. He had no help, as no other Notre Dame player scored in double figures. Dane Goodwin was the closest with eight points, followed by Laszewski and Trey Wertz with seven apiece.

In addition to the solid defensive performance, Tech capitalized off turnovers (ten points) and crashed the boards, finishing with a +10 rebounding margin (46-36) and allowing just four offensive rebounds. In the first meeting, the Hokies posted a +17 margin. Not as large this time around, but good enough.

What does this mean for Virginia Tech moving forward?

Well, a large silhouette looms ahead with a matchup against No. 8 Virginia on Saturday in Cassell Coliseum. The Cavaliers ripped Syracuse apart on Monday, winning 81-58 in John Paul Jones Arena.

Tech looked out of it for much of the game against the Orange, a step behind against the 2-3 zone.

The pack-line defense of UVa is a different animal, and the Cavaliers are first in the ACC in adjusted defensive efficiency. They are a solid rebounding team and don't let opponents shoot well from anywhere on the floor. Playing against that defense requires the discipline to take care of the basketball and make the rare open looks that the Cavaliers yield.

Wednesday night was a different story, but against Wake Forest and Syracuse, Tech struggled to make the easy baskets, from runners in the lane and dunks to layups and wide open threes. The Hokies have to make those shots to knock off UVa.

It's not just the Cavalier defense that Young & Co. have to worry about, though. Tony Bennett's team is first in the ACC in many offensive categories, including efficiency, effective field goal percentage and turnover rate.

Virginia has only lost twice this season: by one to San Francisco at Mohegan Sun and by 23 to Gonzaga in Fort Worth. The Zags were the better team, but the stat that sticks out from the Dons' win is that they shot 46% from three and made 52% of their shots in the second half, including 60% (9-15) from deep.

In the last Hokies win, in February of 2018 in Charlottesville, Tech shot 43% from the floor and limited UVa to 34% shooting.

The bottomline: Virginia Tech has to be balanced against UVa. Shooting greater than 50 percent from three is only great if you can get the defensive stops to back it up, and the Cavaliers can't be allowed easy buckets in transition or second chance points.

The Hokies have to take care of the basketball, convert the easy looks, crash the boards and get some stops — all things Tech did well against Notre Dame. Tech's going to need another big night from guys like Aluma, Mutts, Alleyne and Cattoor, too.

"They [UVa] looked good [against Syracuse], making shots," Young said. "They're as stingy defensively as ever. ... They're hard to guard. We'll be ready for Saturday. We look forward to it."

amped, and you thru in some GIFtory with the article, love it!!!!! WOOOOO!!!

"They're as stingy defensively as ever. ... They're hard to guard. We'll be ready for Saturday. We look forward to it."

We need all cylinders firing Saturday for the W. Shooters have to shoot out of a slump - Cone is there. He's gonna shoot Saturday. If the cylinders we hit on against ND hit, we play similar defensive intensity, and Cone nails some shots, the pack line will have to loosen... and then we've got a shot.

UVA has gotten their act together. Its a shame we didn't get to play them when scheduled earlier. They weren't the same team then. I think we clearly would have won that game, now... they've got their defense working, its gonna be tough if we have guys go cold.

It's going to be tough even if our guys hit all their averages. The scary thing about this UVA team isn't their defense. They have had the same level of defense for years. The scary thing is the fact they have a well rounded offense now. It wasn't until their loss to Gonzaga that they seemed to figure out scoring. After that game they have been on a blistering pace, averaging 72 points per game, scoring more than 80 three times in those seven games. They had one squeaker with GT, but all six other games were by nine or more points, two of them by 23 or more.

Prior to that game their whole offense rotated around Sam Hauser. Now they have four contributors averaging 9.7 or more per game. Clark and Huff have given them the inside out game they were lacking early in the season. They also are getting almost 25 points per game in bench production, so even when the second team plays they still are effective offensively.

Not just Cone, but Bede too. He's averaging 3 3 pt attempts per game, over the last three games, but has only hit one shot. If he can hit one three, that helps. But Cone's last three have been an abysmal 11.76% from range.

Alleyne and Cattoor need to continue their combined 15-35 over the last 3.

If we can get Alleyne, Cattoor, Cone, Bede, and Mutts to go a combined 11-25 from 3 (ie hit their averages and go 4-4 over what UVA allows) and get uva's allowed interior points (14-31) that would put us at 61 points on 56 possessions, not counting offensive rebounds. I will feel comfortable in a win if we can get 60+ from the floor, before FT are taken into account.

I agree with Pete, but one thing does sort of need to be taken into account regarding UVA's offensive output these last few games. Nationally speaking, VT is better than the majority of defenses UVA has come up against during that stretch. I will give them their dismantling of Clemson, but the best ranked of the remaining team defenses was Wake at 144. We are a significantly better offensive team than Clemson, part of which is due to us getting fouls. We have accrued over 100 more FTA than Clemson. UVA's offense will have a hard time getting into the kind of rhythm that they had against Clemson when we are drawing fouls on them at a higher rate.

Uva looks a little like they are falling in love with the 3. That can go away as fast as it came.

Essentially 30 of 73 ppg from the perimeter. Defensively they allow only 57.9 ppg. Gives them quite a bit of leeway to go cold outside.

They run a lot of interior pick and roll stuff but seems only guy who is truly a post up is Huff. Interested in your assessment

Hauser is a bit soft inside, Caffaro is solid when he gets in games but isn't a significant factor, the one to really watch for alongside Huff is Trey Murphy. He shoots 57% and does most of that work in the lane.

As a team though the Cavaliers have 11 players shooting better than 50% inside the perimeter although several of those are irregular players or have minor consistent roles. This goes back to their bench scoring and why it's so consistent though.

I missed the live game but watched the condensed game tonight. Mutts was the MAN! Cattoor really looks confident shooting right now. I can't wait to watch on Saturday!

Sounds like we got by thanks to an inferior opponent, gonna have to bring it on Saturday to knock off those insufferable pricks to the east.