Hokies Aim to Continue Hot Streak Against the Panthers

Virginia Tech is back on the road on Wednesday at Pitt on a high from its win over Virginia. What do the Hokies need to do to win their second straight away from Cassell? 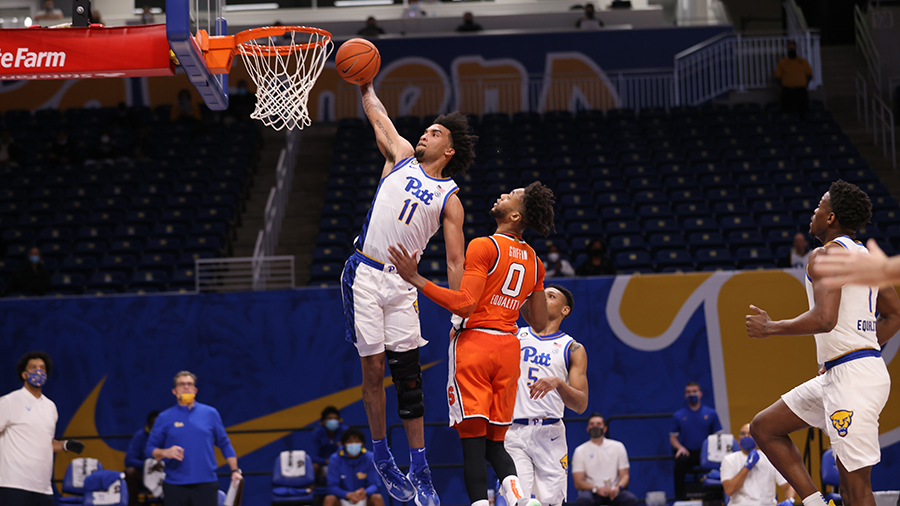 After sluggish games at Wake Forest and Syracuse, Virginia Tech and Mike Young followed up a double-digit road win at Notre Dame with a dominant win over then-No. 8 Virginia. Up next on the docket: Pitt, which has lost three straight games, including two at home.

Against the Cavaliers, Tech's defense was the story of the night, holding UVa to 36.5% from the field, 36% from three and forcing nine turnovers. The Hokies completely shut down Kihei Clark, UVa's primary ball-handler and distributor, and didn't allow him to record an assist in 20 minutes of play for the first time in his career.

Keve Aluma was fantastic, too. He dropped a double-double of 29 points and 10 rebounds against the Cavaliers, good enough to earn him ACC, Naismith Trophy and Oscar Robertson Trophy Player of the Week accolades.

"He is really, really good, and to think he was at Wofford," Pitt coach Jeff Capel said, "that's why Mike's teams are really good.

"He's really good with his footwork and his shot fakes. He's been really good for them all year so we're going to have to try to find a way to slow him down a bit."

Tech is hot as of late, playing really well on the defensive end with Aluma drawing most of the focus offensively. It's the opposite story for the Panthers, who fell in their most recent game to Notre Dame by 26.

It's a tough Pitt team that has dealt with COVID-19 issues and has played very poorly recently despite winning four of its first five ACC games. The Panthers are an underrated and capable team in the conference, and they might have the league's best player: Justin Champagnie.

The six-foot-six guard from Brooklyn leads the ACC in double-doubles with seven (Aluma has four) and averages 20 points and 12 rebounds per game. He's a dangerous player to guard because of his skillset and ability to slot anywhere on the floor, and Tyrece Radford would've matched up well with him.

Without Radford, don't be surprised if the defensive assignment falls to Hunter Cattoor. He played hard-nosed defense on Clark when Bede got into foul trouble against UVa recorded three blocks against the Cavaliers.

Cattoor sacrifices his body, moves his feet quickly (he leads the team in offensive fouls drawn with 13), is stubborn and has shown how valuable he is on the defensive end so far this season. He seems to be Young's No. 2 option defensively, though Justyn Mutts could take up the assignment, too.

Au'Diese Toney and Xavier Johnson have been the main compliments to Champagnie for Pitt so far this season.

Toney (14.7 ppg, 6.0 rpg) is a six-foot-six junior that was on fire earlier in the season but has gone cold in recent games, similar to Tech's Jalen Cone. After scoring in double figures in five straight games, he's scored eight points in two consecutive contests.

The Huntsville, Ala. native isn't to be underestimated, though. Like Champagnie, he's a jack of all trades for Capel's unit and does everything from dishing out assists and crashing the glass to using his size to force mismatches.

His size poses a bit of a problem too. One of Toney or Champagnie will play the four, which will fall to Mutts. The Delaware transfer recorded three blocks against Notre Dame two games ago and is a physical presence that should help keep either or off the boards.

The good news: with Mutts being a smaller-than-average forward at six-foot-seven, the Hokies should be able to switch most defensive assignments, potentially one through four, against Pitt. Mutts will have a size advantage over Toney and Champagnie but his elusiveness and ability to guard all positions will help Tech defensively.

While Champagnie and Toney score the ball well for the Panthers, Johnson is a fairly experienced ball-handler in the backcourt for Capel & Co.

The six-foot-three guard from Woodbridge, Va. leads the ACC in assists and is 15th nationally with an average of 6.1 per game. He had a five-game stretch before Pitt's loss to Notre Dame where he averaged eight per game and posted a career-high 11 assists vs. Duke.

Johnson (13.2 ppg, 3.7 rpg) isn't the team's go-to option (that falls to Champagnie), but he is a capable scorer when needed. The task of guarding him will most likely fall to Tech's Wabissa Bede, assuming he isn't stuck on Champagnie.

Bede, a graduate student from North Andover, Mass. led the way defensively in contests at Notre Dame and vs. UVa, holding the duo of Prentiss Hubb (ND) and Clark to seven turnovers and just three assists (all Hubb).

"The most important person in our program since we got here in April 2019 is Wabissa Bede," Young said. "He doesn't turn it over and he's going to do a whale of a job on Prentiss Hubb, on Kihei Clark. I put a lot of the credit on his shoulders.

"I'm pleased with the unit, but I think a lot of that credit goes to Wabissa. Watch him play. Watch him defensively. How perceptive he is. He has an incredible basketball IQ defensively. ... I thought we did a really good job clogging the driving lines [vs. UVa], and Wabissa's work in that was a significant part of the game."

Pitt isn't terrific on either end of the floor, though it takes care of the ball and gets to the free throw line. The Panthers are average on defense but have held ACC opponents to shoot just 31.5% from behind the arc this season, which is something to keep an eye on.

The Panthers' main strength is crashing the glass. Pitt is second in the conference, averaging 41 total rebounds per game, and is led by Champagnie. The two-time ACC Player of the Week must be kept in check on the boards or it's going to be a long night for the Hokies.

Unlike Pitt, defense has been Virginia Tech's strength this season. The Hokies are currently second in the ACC in adjusted defensive efficiency and 24th in the country, per KenPom.

Tech's had a solid interior defense, hasn't allowed offensive rebounds and has been active blocking shots in recent games. VT should be able to stop Pitt, but it can't allow second chances.

If the Hokies can try to limit the trio of Champagnie, Toney and Johnson, spread the scoring around and get the advantage on the boards, all signs point to a Tech victory.

Without Radford, don't be surprised if the defensive assignment falls to Hunter Cattoor. He played hard-nosed defense on Clark when Bede got into foul trouble against UVa recorded three blocks against the Cavaliers.

Cattoor sacrifices his body, moves his feet quickly (he leads the team in offensive fouls drawn with 13), is stubborn and has shown how valuable he is on the defensive end so far this season. He seems to be Young's No. 2 option defensively, though Justyn Mutts could take up the assignment, too.

He's a real student of the game

He reminds me of Wes Welker.

Coach's son, first guy in and last to leave.

fell in their most recent game to Notre Dame by 26

I appreciate the love for Wabissa and I dig his effort/attitude/leadership but I can't help but think that VT has a better +/- with him off the floor. Anybody have a stat for that so I can put this theory to bed? Also... in tournament games that are close down the stretch we will have to pull him off the floor because of his FT shooting. Might be important to develop somebody else as the floor general as the season wanes.

His strength is his defense. But he came up big with FT's and a 3 vs. UVA.

I understand that. What I am asking is if anybody has any statistics regarding our +/- relative to when he is on the floor versus off the floor.

It actually appeared to be 1.7. That puts him 7th on the team in offensive impact and he actually isn't our highest rated defender, it is Cattoor. Anyway, thanks for sending the link.