Actual football news related to the on field playing of football!!!

247 Sports reporting a few number changes and the new Hokies have all gotten their numbers.

Some notes:
#1 Chamarri Connor
#2 Jermaine Waller (any commentator who misses out on calling a Connor-Waller tackle a 1-2 punch needs a reassignment)
#4 Connor Blumrick
#6 Josh Fuga
#7 Marco Lee (an RB with #7???? that'll never work)
#9 Tayvion Robinson
#11 Amare Barno
#22 Mario Kendricks (I think we may have the lowest jersey number total for any group of DTs) 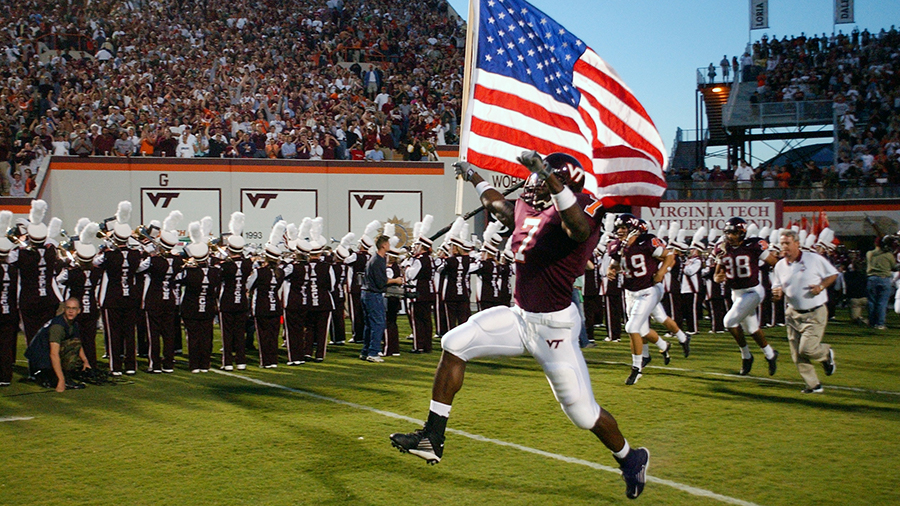 I think that was his point/the joke.

I'm going to leave this at 7 Legs. I legged another of your comments for you, though.

This was simply a reason to post KJ!!! I get what he was going for. I carried it to the next step. Lost in translation. I got the joke.

but nobody likes when you explain the joke....

I'm just jabbin you, I don't really mind either way

The way things are going right about now, thank goodness they did not announce someone is getting the #69 jersey.

Lol, was going to make a 69 joke but not sure that would be appropriate at this time. Glad someone is just a depraved and dirty minded as myself...

how are they gonna fit all that on there

This is an A+ joke

We can't give Jordan 0 since Holston already has it maybe we can give him double Zeros.

Tae Daley taking over #17 has my expectations sky-high.

A VT safety with the #17 is quite the expectation to live up to.

Of course, how many of those hits would get a person kicked out of the game today with the targeting rules and how they are being called. Some of the hits I've seen people tossed for are absurd. I get that you want to protect the players, but the pendulum seems to have swung too far lately. I mean receiver dips their head down at the last moment, defender starts to pull up and twists his body so that only his side its the receiver in the helmet and the guy was tossed. Think it was Auburn. Announcer is saying, I don't know how you can play defense if that is targeting.

Not to mention, the greatest moment by someone wearing that number

Looks like this also confirms the Jack Hollifield to offensive line theory - still listed as a tight end, but his number went from 95 to 66.

Report him as eligible on GL Jumbo packages

Marco Lee taking on #7 is another signal that he's pulled out a BAMF performance in spring ball.

A lot of talk that he'll be RB1 this fall if healthy.

I like these number changes. Lots of veterans and playmakers getting to take "cooler" numbers is never a bad thing. Always good to be pro-fun when it comes to something as ultimately meaningless as numbers.

A few more interesting ones about incoming players:

It's not so surprising given the number of large safety type bodies we took that some would end up at LB. It's no secret that a lot of teams are moving to a more strong safety type build for the outside LB's to combat the spread/quick sub personnel changes. Both of these numbers seem to suggest they are getting looks at Backer to start. I wasn't surprised at all to see Keller start out at LB, but I knew very little about Elder. His size coming in suggested a more normal safety pathway at a glance. He is listed at 6-2 198 on Hokiesports.

I have seen comments about getting him a "cooler" number in the past given his playmaking potential. I would imagine most people think 23 is an upgrade.

- Marco Lee rocking the #7, as other have mentioned, suggests there may be some truth to the Spring smoke around him being in line for a much bigger role this season. My expectations are automatically (and irrationally) raised for any skill player rocking the 7.

I loved the 35 for some reason

As fun offseason lookbacks are something we desperately need, here's eHOKIEt's post from four years ago on the greatest to ever wear each number

Lee Suggs was a monster

Don't click the auto dial some of those number sequences create on a iPhone). Telling for a friend.

i hope nothing is "going on" with Jordan and he is good to go day 1. If so, he will be at worst our second best OL. Kid can play and proved it in the B1G- not G5

FWIW, hokiesports lists him as #56

Storm Murphy has his Eye on Helping the Hokies win a Conference Championship
Joe Lanza, 03/16/21
19 hours (13)