The Hokies got all the good looks they needed to beat North Carolina, but an uncanny cold spell dampened their tournament hopes. 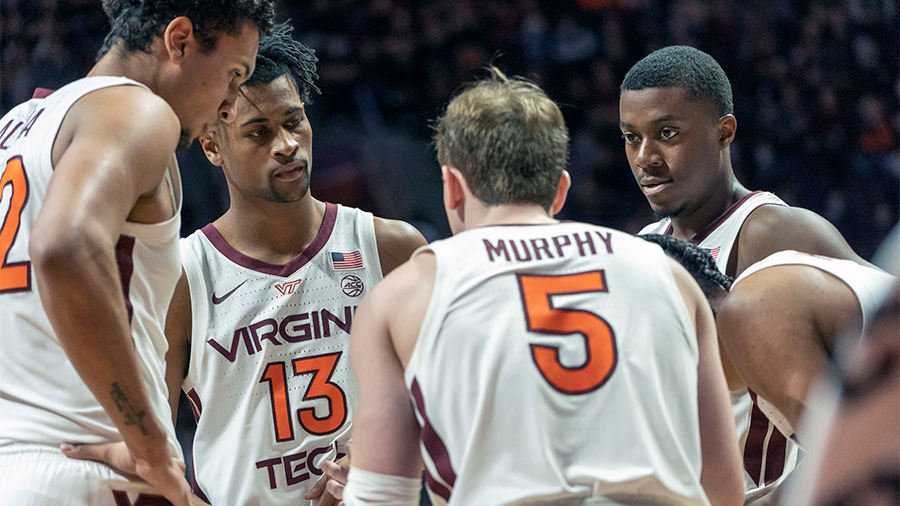 Virginia Tech fans were rudely reminded on Saturday that all streaks come to an end.

The Hokies' 65-57 loss to North Carolina snapped the team's run of six wins. The raucous crowd inside Cassell Coliseum was quieted for most of the night as they witnessed an abnormally chilly shooting performance. The Hokies, owners of the fourth-best 3P% in America, hit a season-low 5-of-26 from downtown, erasing their hopes for a statement win against a team in the upper echelon in the ACC.

If Virginia Tech's NCAA Tournament hopes were dim before this game, they are now about as far away as the green light opposite Jay Gatsby's dock. The Hokies would most likely have to win all four remaining games in their regular season schedule, and then make a deep conference tournament run just to be in consideration. Even then, it's hard to fathom the committee favoring a team that, at best, would be 1-5 against Quadrant I teams, presupposing a victory at Miami (No. 65 in the NET).

The good news is that all these games are winnable. But so too were all of the Hokies' previous ACC games, and yet here they are, with a .500 league record in late February. Tech's performance against North Carolina was a microcosm of their season — in the end, a story of missed opportunities.

Luck of the Draw

Every sporting event involves some element of luck. Sometimes a team gets crazy hot from three. Sometimes a team benefits from lopsided officiating. An average player could go off for 20 points, and a great one could throw up an O-fer. There exists an inherent unpredictability in sports that no computer or prognosticator can ever account for. If they could, there would be no reason to play the games, much less watch them.

Tech was victimized by their own terrible shooting against the Tar Heels for no reason other than bad luck. I went back and looked at every three-pointer the Hokies took: by my estimation, they made 5-of-21 three-pointers that were either uncontested or partially contested, including 2-of-10 on those entirely uncontested. Tech ran the same actions they've run all year: cross screens for Hunter Cattoor and Nahiem Alleyne, wide pindowns, dribble handoffs at the top of the key. The shots simply didn't fall.

"We couldn't get the ball in the basket," Young said. "I thought we had great shot after great shot. If we were to go out and play again, I would take the same shots. We've been so impressive offensively, but we had a tough night."

I have no reason to eschew his judgement.

Exhibit A. Storm Murphy (#5) beats Bacot off the dribble. He draws the attention of R.J. Davis (#4), who leaves Alleyne (#4) all alone in the corner. Murphy finds his running mate with a slick no-look pass, but he can't drill a wide-open shot.

Exhibit B. Aluma sets a corner pindown for Murphy just inside the arc. UNC doesn't want to switch, so Caleb Love (#2) has to fight through it. He even gives Murphy the benefit of going under the screen, a cardinal sin against a shooter. With an open look, Murphy tees off from downtown. An easy triple? Nope. An airball. The momentum remains with the blue and white.

The opening minutes of the second half were very consequential. Virginia Tech got stops on five of six possessions over a four-minute span. In the normal ebb and flow of a basketball game, this is where the Hokies normally would have whittled away at the deficit and gotten the home crowd back on their side. But they came away with only three points, and in the blink of an eye went down 14 at the first media timeout.

It's tempting for me to say that the Hokies should have gotten the ball inside more — and perhaps they should have — but Tech did not shoot an abnormally high percentage of their shots from three: 41%, right near their season average. I do lament the fact that they only got to the line six times, but the officials seemed disinterested in calling fouls most of the game. (For what it's worth, North Carolina only had seven free-throw attempts before the Hokies started intentionally fouling.)

One thing that stood out was how North Carolina played Justyn Mutts. They were perfectly content to leave him unguarded on the perimeter and turn him into a driver and post-up player, which is not his strong suit due to his lack of handles. (He had another four turnovers in this game.)

On this possession, Mutts (#25) screens for Cattoor (#0) at the top of the circle. Knowing Cattoor's shooting ability, Leaky Black (#1) fights over the screen, with Brady Manek (#45) providing help. When the ball swings back to Mutts, Manek does not rush to close out, playing the drive instead of the shot. Mutts decides to attack the basket, but dribbles the ball off his foot, resulting in a turnover.

I can't quibble much with the Hokies' defense, especially in the second half. They limited Armando Bacot to 12 points on seven FGA, occasionally bringing double-teams to force the ball out of his hands and prevent easy post-ups. Bacot's impact was much more visible on defense, as he hauled in 15 rebounds with five blocks, altering the trajectory of numerous shots.

This was a well-executed play that Bacot (#5) spoiled. It's a simple cross creen set by Cattoor, who buries his shoulder into the UNC big man in an effort to free Keve Aluma for a layup. But Bacot does a great job of fighting through it, recovering, and using his reach and verticality to block the shot. Very few centers are capable of making this play; Bacot is certainly an exception.

The other day a friend shared with me the above tweet from JG Trends that displays shot quality from three and midrange. The Hokies, to little surprise, lead the country in three-point shot quality at nearly 100%. This is a huge reason why Young's teams so frequently rank among the best in three-point percentage: they get high-percentage looks.

In a broad sense, shot quality is the most fundamental component of winning basketball. Some players are better at making difficult shots than others, but the teams that get the best looks on offense and prevent good looks on defense tend to win the most. Many factors go into these calculations, including a players' shooting ability, shot distance and location, the positioning of the defense, and the percent-chance for a rebound. That is partly a function of talent (e.g. the ability to get high-percentage shots at the rim or extend defenses with shooting) and partly a function of coaching (e.g. good ball movement).

To this end, the data-tracking website ShotQuality.com tabs the Hokies' offense as being the 16th-most efficient in terms of generating quality possessions, tops in all the ACC. Their defense ranks 52nd, good for sixth in the league. For as much as we talk about the limitations of the roster, Tech has played very fundamentally sound basketball this season. If you stick with the process long enough, eventually, the results will follow, even if not in one year.

To win six consecutive ACC games is incredibly hard; to win seven is even harder. The simple fact is that the Hokies' luck ran out against North Carolina despite their execution on both ends of the floor. Regrettably, that bad luck just so happened to cost them a quality win and, perhaps, a shot at the Big Dance.

NCAA tourney team when we're not shooting cold by every single metric.

Just couldn't get a big win to solidify the resume when it was needed. Unfortunate but I'm hoping for some luck in the ACCT, hate to see these guys not get to display their best.

Well, maybe we can make a run in the NIT if we don't make it.

While UNC wasn't going to the line shooting free throws, the refs not calling anything also let their bigs know that they could muscle us around all game.

Muscle around or not. We had their number. if we just hit the open looks our offense created all game... we win going away. Our guys were up to the task, including dealing with their muscling.

We need to have more dimensions. Our starting guards only shoot, which means they are ineffective and we are toast when they are cold. Murphy + Alleyne + Cattoor shot 1-14 from 3 the other day before garbage time. Murphy doesn't drive much, Cattoor hardly ever, Alleyne tries but is really inefficient. We miss Radford so much.

Pedulla had a couple nice drives and finishes the other day and I still like what I've seen of Maddox, so maybe we can have a more balanced approach in the future.

Hoping for a dream run in the ACCT. This team is flawed but good enough to be a 7-11 seed if we hadn't lost so many winnable games