It's March; Virginia Tech set to Dance with Texas

The Hokies are hot, but they face a Longhorns team that is experienced and disciplined. 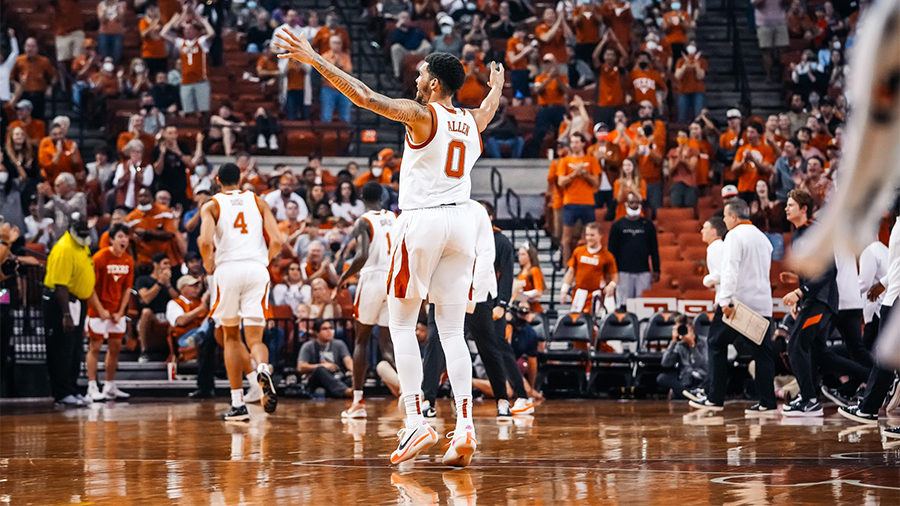 Virginia Tech and Texas will arrive at their Round of 64 matchup from completely opposite directions.

The Hokies, winners of four straight and 13 of their last 15, are fresh off the first ACC Tournament championship in program history. They beat a top 10 team in Duke by double-digits and continue to climb their way up the efficiency metrics.

Texas, meanwhile, comes into this game having lost three straight, though two of those were single-digit defeats to No. 3 Kansas and No. 4 Baylor. They fell in the quarterfinals of the Big 12 Tournament to TCU last Thursday, blowing an 18-point first half lead to lose 65-60. After the game, Beard openly excoriated the effort of his players.

"I think we've got a bunch of guys that think they have all the answers, but they really don't," Beard said. "You gotta make winning plays, and a part of winning-play mentality is you have to hate to lose."

This is not a team peaking at the right time. But given Beard's resume, I trust that he can right the ship.

It will be challenging, however, because Texas is without the services of junior forward Tre Mitchell, who has missed the past seven games due to a personal leave of absence. The Longhorns are just 3-5 in the games that he has missed this year, compared to 8-4 against Big 12 opponents when he does play. Before you get too overconfident, Bart Torvik still has Texas as the 28th most efficient team in the time that Mitchell has been unavailable. The Horns have a roster stocked with four-star talent and a head coach who has a track record of maximizing that talent. Losing one great player hasn't derailed their season, but it may come back to hurt them in postseason play.

The loss of Mitchell has been felt much more on the defensive end, where Texas — a team of average height — has put 6'7 senior Christian Bishop (6.8 ppg) at the center position. In terms of on-court efficiency, Bishop does not quite provide the defensive value that Mitchell does, although he is a very efficient inside scorer and one of the best offensive rebounders in the nation (16th in ORB%).

The Horns' point guard is senior Marcus Carr (10.9 ppg), who came over from Minnesota as one of the most highly-coveted transfers on the market. (If the name rings a bell, he played as a freshman for Pitt and scored 14 points in a game against Virginia Tech in 2018.) While Carr facilitates well, he is an extremely average shooter and for that reason has seen a reduction in minutes and usage compared to last year.

Senior forward Timmy Allen (12.3 ppg) leads the team in scoring. He draws a lot of fouls and is very effective scoring inside, sporting a 63.9 FG% on close twos. However, he can shoot his team out of a game sometimes (like his 2-for-15 performance against Kansas), and at 6'6, his inability to hit threes limits his value somewhat.

Sixth-year senior guard Andrew Jones (10.7 ppg) is the grizzly veteran of the bunch. He was a five-star recruit all the way back in 2016 — Shaka Smart's first full recruiting class. Jones has flipped between a starting and bench role numerous times this season, and is currently in the midst of a dreadful shooting slump: 4-for-31 (12%) from three over his past five games. Rounding out the starting five is senior SG Courtney Ramey (9.5 ppg), who is the only respectable three-point shooter on the team at 36%.

Tony Bennett of the Big 12

Beard has always been a defensive-minded coach. His teams at Texas Tech consistently ranked among the best in AdjD, and he has brought that same mentality to Austin. Schematically, he employs the "no-middle" defense which emphasizes forcing ballhandlers to the baseline and sideline, preventing dribble-penetration and easy shots at the rim.

One of the ways this is accomplished is by "icing" ball screens.

On this possession in the TCU game, the Longhorns' Andrew Jones (#1) ices a ball screen on the wing. He points his feet perpendicular to the sideline to force the offensive player to dribble away from the screen. Chuck O'Bannon (#5) decides to use the screen, and Jones fights through it while Brock Cunningham (#30) drops and slides his feet laterally to stay with the ball. Note especially Timmy Allen (#0): he steps up to the perimeter and lets Mike Miles (#1) cut to the baseline. In doing so, he trusts his teammate, Cunningham, to rotate over and contest the shot, which he does. Miles puts up a floater so errant that it hits the framing of the backboard.

The idea behind this strategy is that by keeping the ball out of the paint, you are taking away a situation in which a ball handler is at his most dangerous. A ball handler in the paint forces the defense to collapse where he can drive and kick to teammates. When the ball is near the sideline, as we see here, everyone else is on the weak side and thus not part of the action.

Also expect a lot of doubles in the post, which are difficult to pass out of because of Texas' length. They force tons of turnovers (14th in opponents' TO%) with their scheme and are very disruptive to passing lanes. Sometimes it can get them into trouble however, as the Horns foul at a high rate (they ranked dead last during Big 12 play in opponents' FT rate).

Don't let the Longhorns' record fool you: this is a good ball club. They have the misfortune of playing in arguably the toughest conference in basketball, having played seven games against KenPom top 10 teams in their last 12. They are experienced, with seven of their top eight players being juniors or seniors. Like Tech, they play at a slow pace and want to grind it out in the half-court.

When I was studying Texas' recent history, I was quite surprised that KenPom tabbed them as the 11th-best program over the past 25 years. My perception may be warped because of the Longhorns' lack of postseason success: they have not made the Elite Eight since 2008, and have been bounced in the first round four consecutive times, including three at the hands of mid-major programs. This is a program starving for tournament success. They brought in Chris Beard precisely for that reason, having parted ways with Shaka Smart after a perplexing loss to 14-seed Abilene Christian a season ago. Beard re-tooled the roster by bringing in five transfers, all from major-conference schools, and has built on the success of his predecessors in year one.

The Longhorns will be hungry for a win, and they have a coach who is well-versed in winning postseason games. May the best farm animal win?

I like Virginia Tech in this matchup because I don't think Texas, with their lack of size, can handle Keve Aluma and Justyn Mutts. Mitchell is the Horns' best defender and he is unavailable. Bishop is merely okay, and backup center Dylan Disu has played very sparingly.

Further, as well as Texas has been playing recently, Virginia Tech has been playing even better. They held Duke to one of their worst offensive outings of the season, and the Blue Devils have much better shooters and playmakers. Because of Texas' lack of shooting (242nd in 3P%), I have a hard time seeing them scoring enough to keep up with the Hokies. Young and co. will do well enough to scheme up open looks for their guards.

Then again, the Longhorns' defense is far better than any Tech has faced this year. Additionally, Texas is battle-tested, having faced athletes in the Big 12 far superior to those in the ACC. The biggest question for me is how Tech's guards will handle the press. The Hokies have struggled with that for a large portion of the season, including late in the game last week against Clemson.

I do not subscribe much to the "momentum" theory. Yes, Virginia Tech just won a conference championship. But last year Texas did that too, and they were sent packing on day one. There is a lot of luck involved in a single-elimination tournament — that's why it's so fun to watch.

The best sports day of the year has finally arrived.

Gotta hope the 3 ball falls. We live and die by the 3. Get a few early ones to fall, we will be in good shape. So excited!

So expect a low scoring game, first team to 60 wins?

I don't know much about Texas' game, but if we play our game the way we did in the ACCT, we should win this game by double digits. I just hope this bit of a layoff is helpful and not hurtful to us. We just have to stay dialed in and play our game. No doubt our coaches know what we need to do to win.

Who's getting work done?

I'm gonna guess Aluma and either Mutts or Alleyne. Aluma has been top 2 since the start of the ACC Tournament and Mutts and Alleyne are the only starters who haven't

I was referring to being at work doing work, but yes this answer checks out as well

I mean, my students have been at lunch since I posted that, so... not me

Not I, I took today off about 3 weeks ago hoping we would get a Friday or late Thursday game. Glad it worked out. Being able to watch the first round in a bar is one of the best sport experiences around IMO.

Rushing to get as much done before the Ladies tip off as I can.