I listen to a handful of podcasts focused on the history of pro wrestling, and I enjoy watching old tapes. Usually those tapes focus on Mid-Atlantic and Southeastern/Continental Championship wrestling before I was old enough to watch because those were the two promotions which regularly promoted in northeast Tennessee and Southwest Virginia. While outside of Ron Fuller's Studcast and the occasional guest appearance by Beau James on Between the Sheets there is rarely content around the Mountain Empire happenings of pro wrestling, I absorb what I can, and then check out other cool stuff like Mid South (Louisiana-Arkansas), Memphis, and old Nick Bockwinkel stuff in the AWA.

One of the podcasts I listen to is hosted by John McAdam. While he focuses on the northeast, he posed an interesting question- who are the best heels of all time? He used the "Mount Rushmore" model to limit it to four.

I don't know if I can do that. From those older tapes, there are two completely distinct types of heels- the ones who can get their own heat both through their ventures in the ring and talking, and the monsters who used mouthpieces (like Abdullah the Butcher) to get heat. Here are my lists, highlighting the two very distinct groups. With so many folks who came around post Hulk Hogan/WWF expansion, you should check out their work where you can find it. (If you ask me to post clips, I am happy to do it.)

After watching Highlander last night, and considering current events, I'd have to say that the Fabulous Freebirds should be on the list. 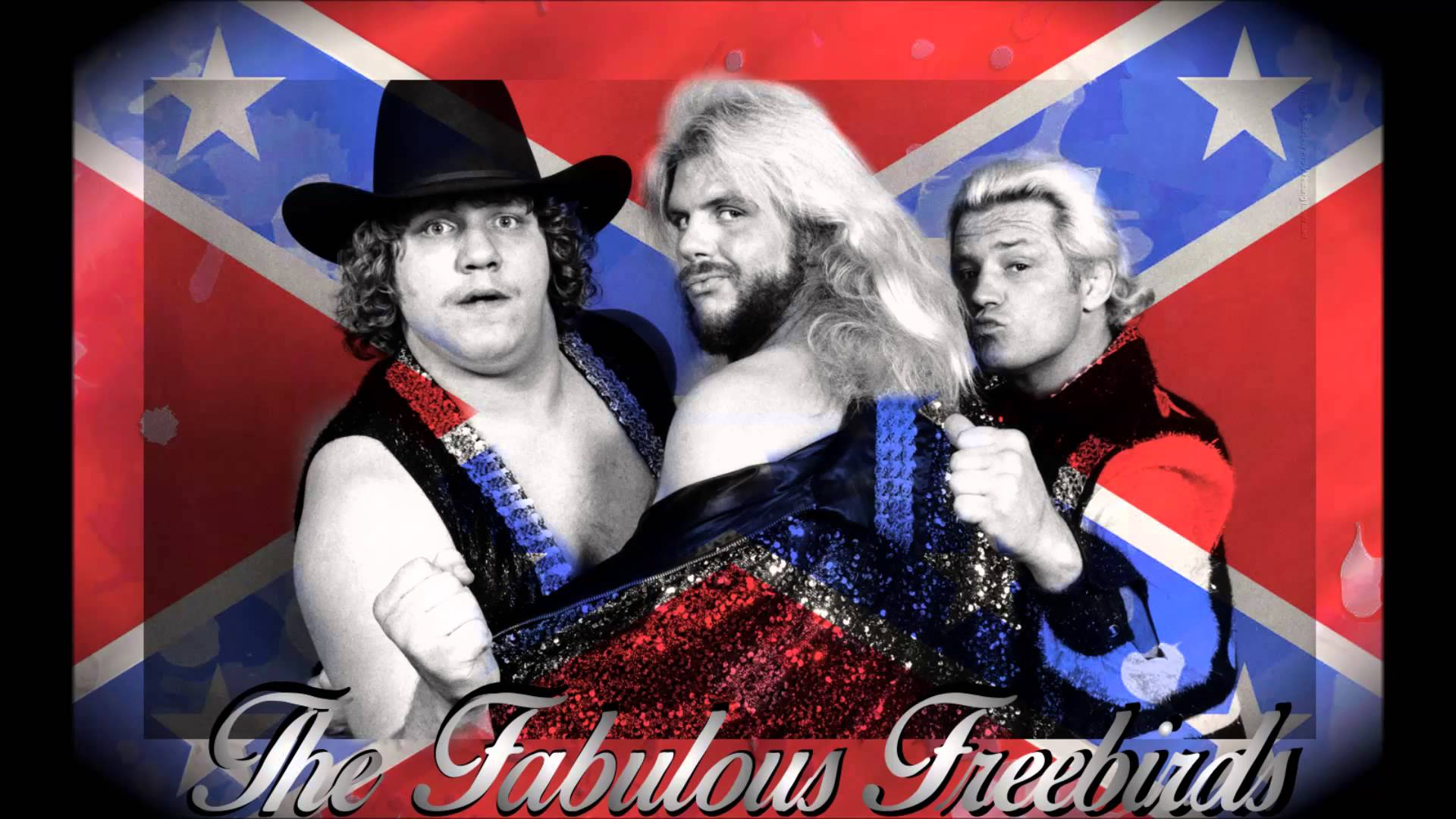 P.S. "Heeeeeere we are! Born to be kings, we're the princes of the uuuuuniverrrrse." What a fantastic opening.

That is tough because I have not seen the Freebirds best work. Gordy was awesome. But, their best heat (blinding Junkyard Dog, the immediate aftermath of Gordy slamming the cage door on Kerry Von Erich) are lost to history. By the time I saw the Freebirds, Hayes was doing color with Jim Ross in the UWF, Gordy was going back and forth to Japan and wasn't on TV much, and Buddy was gone. Then Hayes and Roberts became "The Freebirds" and they were terrible.

I always thought the Baron was kind of goofy. There isn't a ton of footage of the Baron that I have seen from back when he was in his prime, and his promos were just silly. If the German heel is your thing, I have always been told that the Von Braunners were the best German Fascist gimmick wrestlers of all time.

Nikita was scary in 84-86, even though with the benefit of hindsight he was really bad as a wrestler. Ivan was a good heel and great in the ring. But, he never really scared me, like he was really going to hurt someone. I liked disingenious Ivan, but I don't believe him like I believe an Ole or Slater.

I only knew the Road Warriors as faces. To me, the best heel in the Legion of Doom when they were heels in Georgia was Jake Roberts.

The two most underrated guys are Dick Slater in 83 and Tully Blanchard in 84 (which is saying something because 84 Crockett outside of Tully and the Wahoo heel turn was really awful.) And nobody talks about Don Carson. Carson looked like he couldn't whip butter with a churn, but man when he opened his mouth people wanted to kill him. And, nobody outside of Ron Fuller every talks about him. It blows my mind.

Where's Bobby Heenan? Is this non-WWF list? He's like the gold standard of heel managers/commentators. Much of Hulk Hogan's success is due in large part to Bobby Heenan being his antagonist

Where is Rick Rude, or the Shockmaster??

Loved Rude's ring work, and in real life he was a tough guy. But, at least for me, he wasn't frightening and he wasn't as dislikeable as a weasel.

Rude innovated by deconstructing pro wrestling in general. He was pointing out to the viewer that they were watching a bunch of greased up dudes in their underwear grabbing each other. Hell, he even had his own face on the crotch of his wrestling pants.

For that matter, I'd love to have pants with my face on the crotch just to wear to a football game once. Would be fun to watch the reactions

Bret Hart was my favorite growing up. He was fantastic all around.

Rowdy Roddy Piper one of the best heels in my mind.

Piper's best heel stuff that I have seen was in Georgia, but he was very Stone Cold-ish with the way he would fight and go crazy. It made him hard to hate.

However, the mention of Piper made me remember a glaring omission- 1980-83 Don Muraco was amazing. Hateable. Evil. And he delivered in a believeable way in the ring. Sadly, I never would have known that because by the time I saw Muraco as a kid, he was so roided up that he couldn't move and he lost all that charisma.

The real Roddy piper is a tough guy to hate too. I don't know how I saw it but celebrity wife swap came on and it was flair and Piper. It was amazing. Never seen another episode, but wow. Flair was best man at Piper's wedding, so Ric knew Pipers wife. But Ric Flair's life is a mess. And the whole episode is really about the Pipers helping the Ric and his wife(gf?) understand that they dont have to go out and buy everyone drinks and spend tons of money. Though Roddy does learn he needs to take his wife out for a fancy dinner once and a while. I have no idea if Ric's breakdown was for the camera, but if not that guy can act.

So, not a wrasslin guy by yall's standards (I know guys from the 90s onward when I see them and enjoy deep diving the 90s highlights on YouTube occasionally, but that's it). But the Joe Rogan podcast with Jake Roberts about a year and a half or so ago was great. Prettyyyy wild dude who somehow is still around to tell his tale. If ya haven't listened to it, highly recommend.

He was fantastic playing himself on the Lucas Bros show

Ox Baker would make my list, i remember watching the Poffo ran ICW at my grandfather's as a child and he legitimately scared me

I don't have a Rushmore of wrestlers but these the favorite of mine:

Shawn Michaels.
The Undertaker when he first came out but lately, he seem to repeatedly undergo metamorphosis, he lost his appeal to me.
The Million Dollar Man, always seem to know how to play the long game that benefits him.
Earthquake. Every time he does the stomp, I was terrified his huge body would squash the wrestler at the conclusion of his finisher.

I always liked the popular wrestlers when they were heels. The Rock, Orton, and Cena (when he was briefly a heel at the beginning of his career) were at their best when they were handing out cheap shots and insults at the crowds.

That being said, The Genetic Jackhammer Vince McMahon to be on this list. He's embraced the role as the ultimate heel for over 20 years

Whether you like it or you don't like it, learn to love it. Because it's the best thing going today. Wooooo!

Sorry to awaken this thread, but it needs exposure:

Don't know if I would call what the Rock or Stone Cold did gimmicks. What helped those guys get over was their authenticity. See Steve Austin's first entrance in the WWF as "The Ring Master." It was only later under his more true to personality persona of Stone Cold that he caught fire.

Been listening to a bunch of Cornette podcasts of late. Has been interesting learning more about the territory days.

The sound of shattering glass still gets me all fired up!

Love the Cornette podcasts. He is hilarious and has so many good stories about the old days of the business. Caught a bit of one recently where he was talking about an episode of Monday Night Raw that was down here in Roanoke back in '97. They wanted to bring the Stone Cold pickup truck down but didn't want to pay to have it transported, so they made him drive it all the way down to Roanoke from Connecticut and he had to drive around town in the thing. Said people were giving him looks with "Gimme a Hell Yeah!" and "100% Pure Whoop Ass!" plastered all over the truck.

Funniest Cornette podcasts - Hulk Hogan's lies (apparently he is a compulsive liar and has told ppl he worked 400 days in a year due to flying across the international date line.)
https://m.youtube.com/watch?v=p7WTm-6JSds

To be the man, you gotta beat the man

Such a bond. All through the years.