Photo Gallery: Getting Too Close For Comfort

Everything about Virginia Tech's 43-41 defeat of North Carolina was tight. 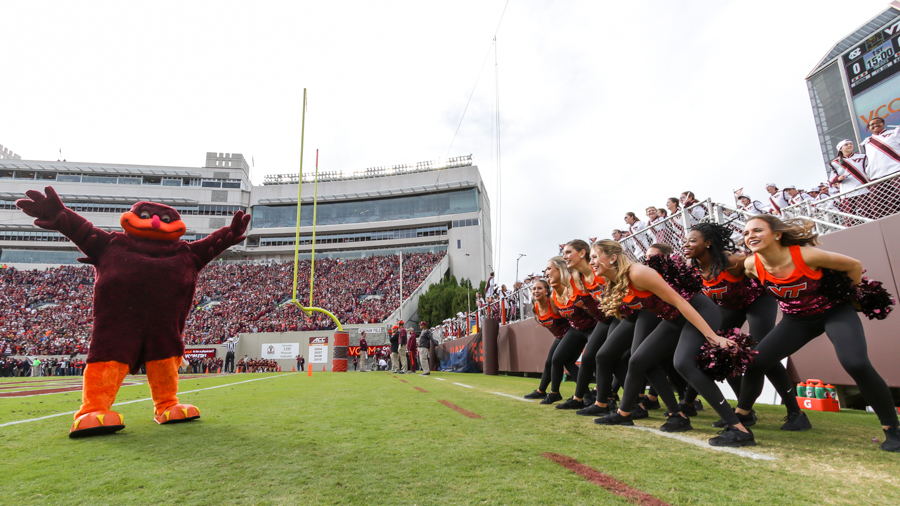 Hello and thanks to the wonderful bye week, the Hokies did not play another stressful overtime game and I finally had enough time to walk y'all through what basically was two full games worth of photos.

The fall colors have been a little late coming to Blacksburg, but this particular tree right outside of Lane was perfectly placed in the quiet time between The Walk and Enter Sandman.

This one I'm simply going to call a preview for a later-in-the-season feature, so stay tuned. 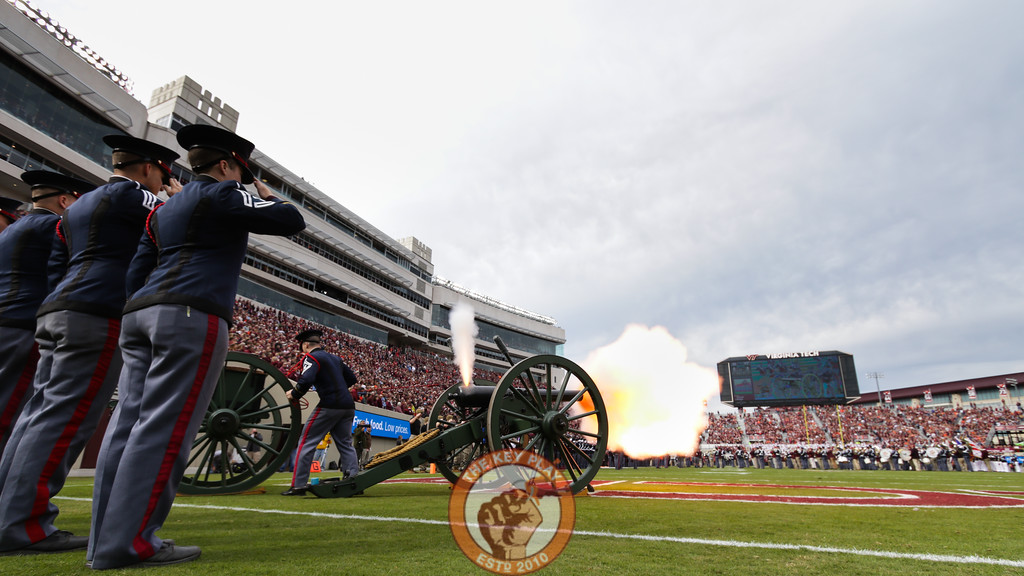 So, my first challenge at Getting Too Close to the action came in the second quarter, after UNC hit Dazz Newsome for a touchdown in the face of the North Endzone Stands. Divine Deable got into a bit of a scuffle with UNC's Dyami Brown for a pair of offsetting penalties. This turned into one of my favorite photos from the game, just take a look at every single pair of eyes in the frame and you can instantly understand everyone's mood at this moment, from the players, to the UNC staff, to the refs desperately trying to keep things under control.

Also in the same vein as Getting Too Close, I'll just simply present to you the Virginia Tech Corps of Cadets, a guaranteed good subject at pretty much any time of the game.

For that last one, there was a forecast of 100% rain later in the evening, and I was genuinely confused as to whether or not I was getting rained on until I turned around after Damon Hazelton's 4th-and-3 touchdown catch in the second overtime.

Pressing rewind a bit, there were a few frames that managed to stick out in my head before we ever sniffed overtime, starting with this Dalton Keene trucking of UNC's DJ Ford in the second quarter.

The second thing that stuck out to me was this Quincy Patterson run in the third quarter, it's almost shocking how much room he had to run through here.

The third was the kickoff man, John Parker Romo, who has a bit of a routine every time he kicks a touchback, which includes a Gronk-level imaginary football spike in the endzone, followed by screaming like The Hulk. On this particular one, he was facing directly at me. 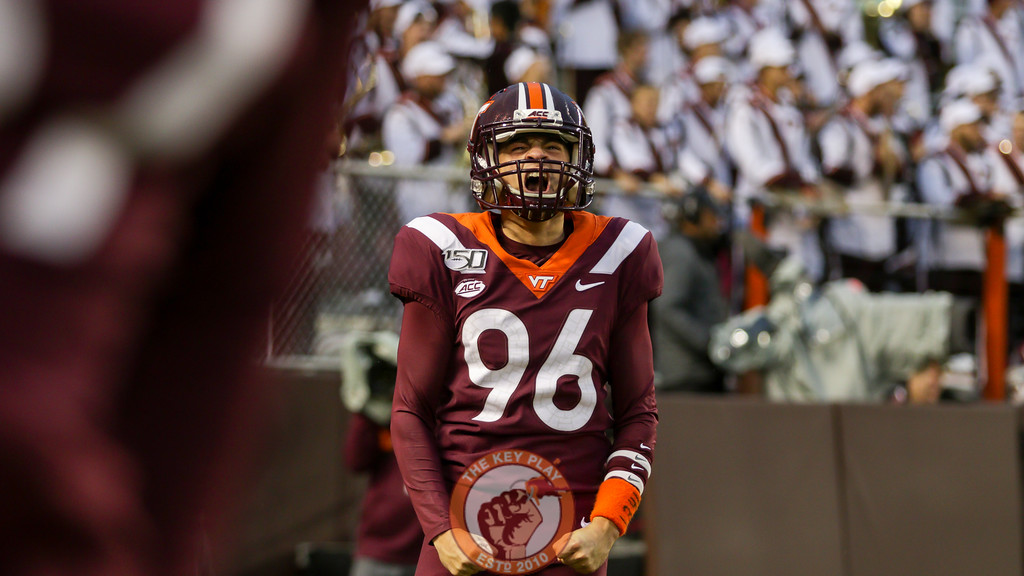 Getting into overtime, there was a whole lot of nothing. Seriously, two teams failing to score points for three straight overtime periods, with each one broken up by a 100 yard dash in between does not make for very good photos. However, as soon as one team breaks through, all hell breaks loose right after it. 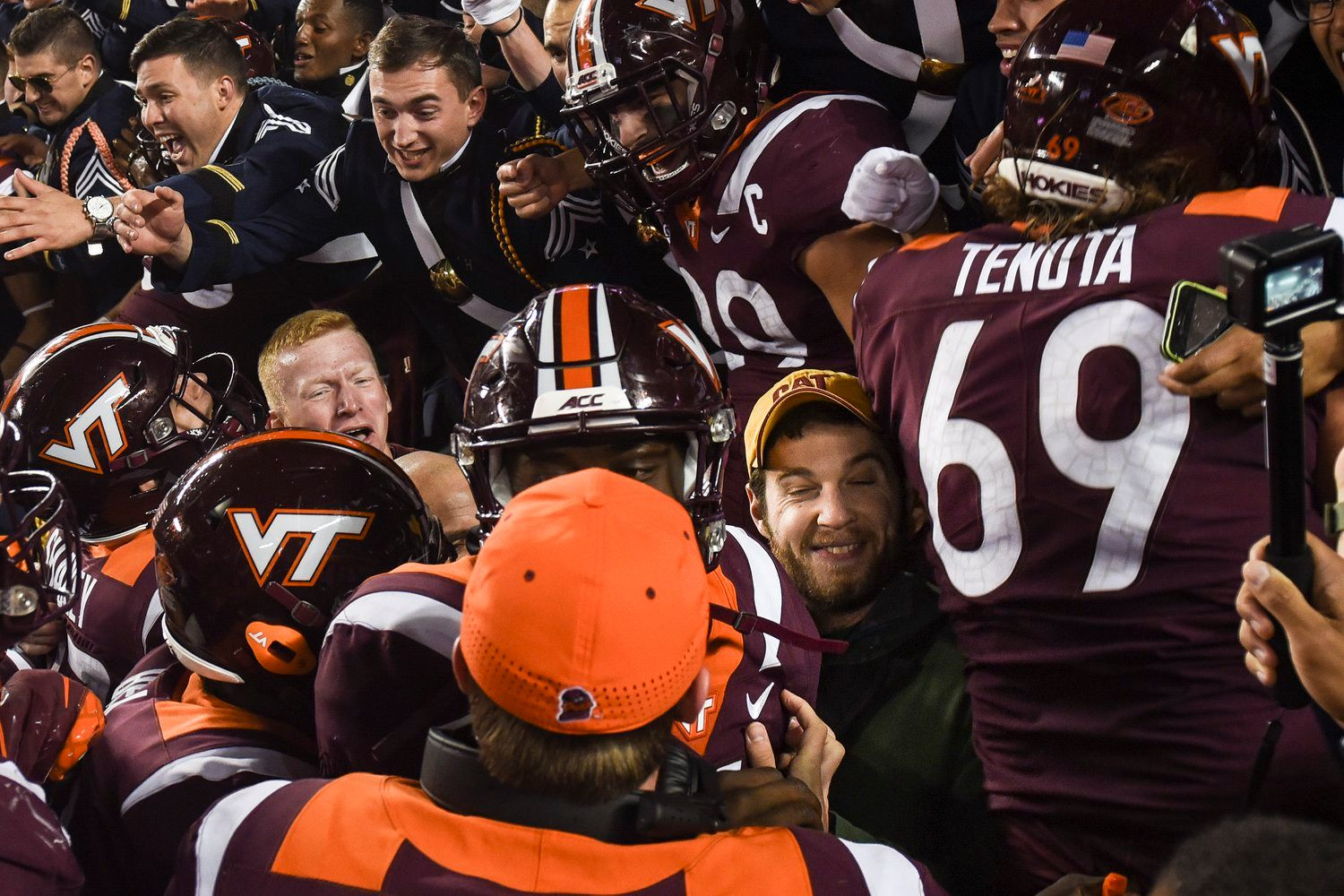 Yup, that's me, you're probably wondering how I ended up in this situation. Just kidding, you know exactly how, I ran in front of six overtimes of celebrating football players and quite literally got crushed into the South Endzone stands. I actually could not breathe for several seconds, so shoutout to Michael Shroyer capturing my struggles at the time.

You have to keep the camera going the whole time though, or as many sports photographers would say: "Shoot through the play". 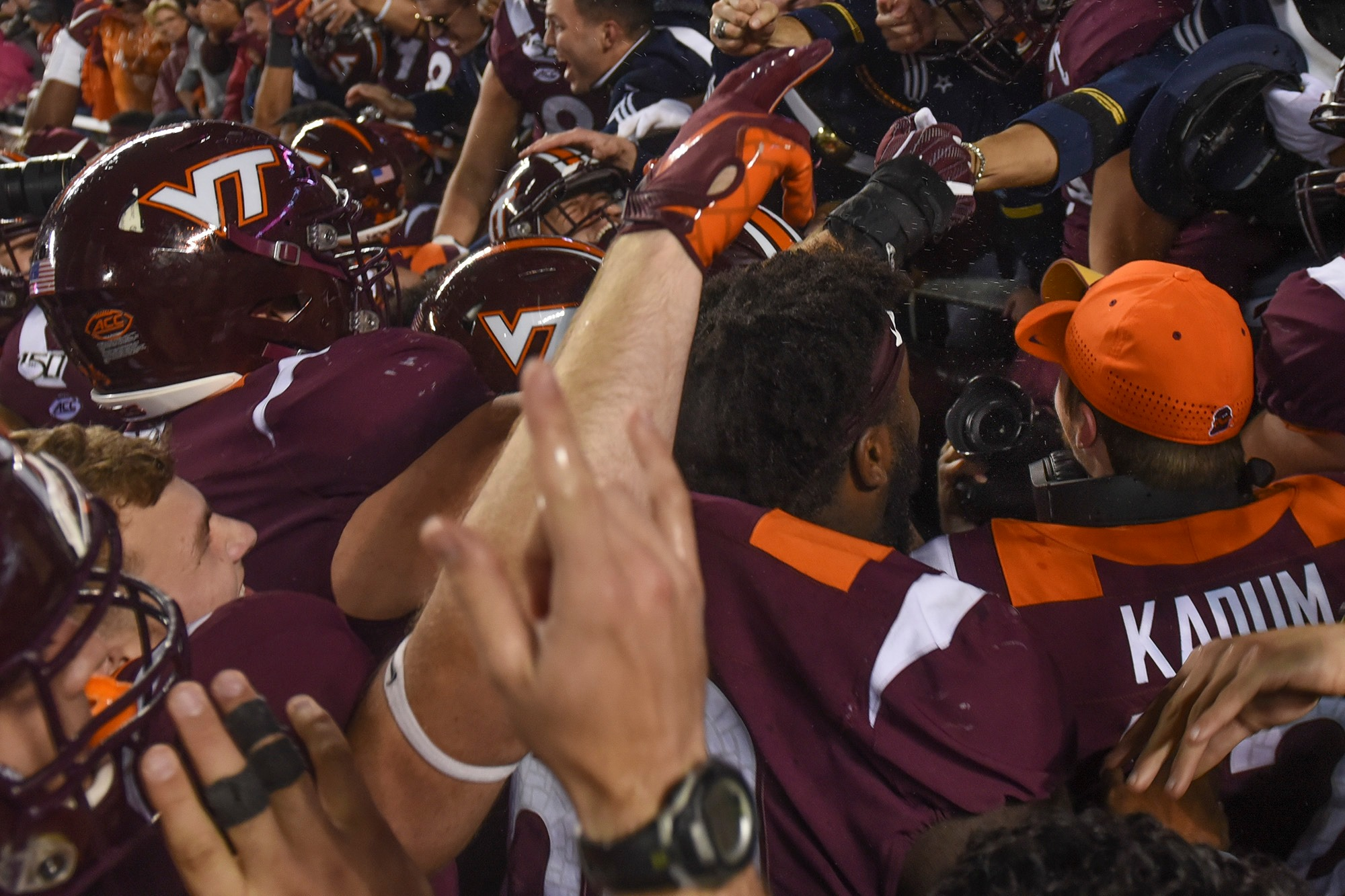 And from the other side of the lens, things turned out ok: 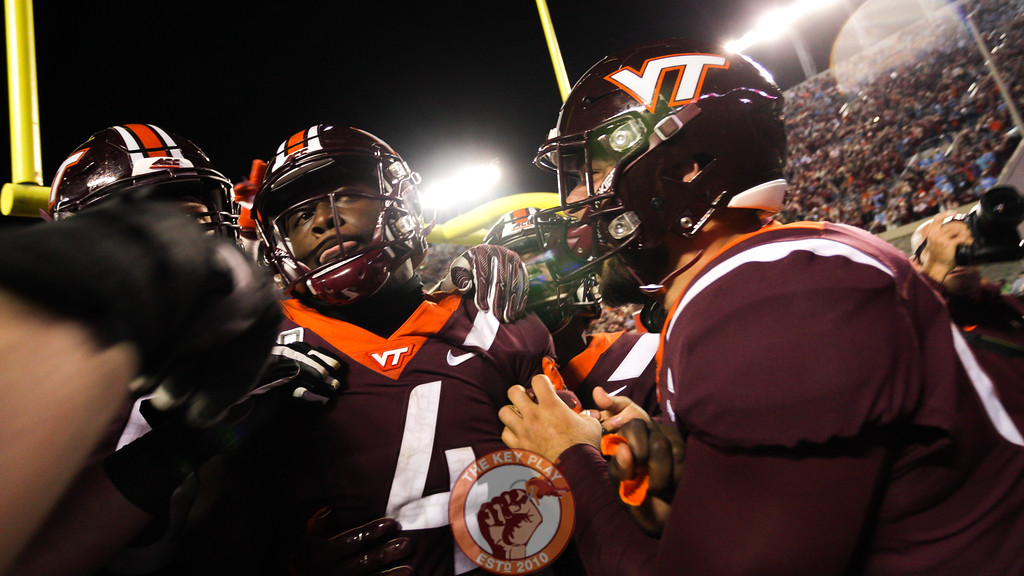 To cap things off with data(!), I've started tracking my movements through each half using my Apple Watch, and it turns out it actually does a really good job in summarizing my game. (The parts where it looks like I'm super rude and walking through many rows of stands are due to GPS signals reflecting off of Lane, I definitely wasn't running stairs in addition to the overtime windsprints.)

First half, you can see me wandering around the warmups in the corner of the North and West stands, move to Skipper in the South stands, hit Enter Sandman and then the coin toss at midfield, followed by staying on the East sideline most of the half. 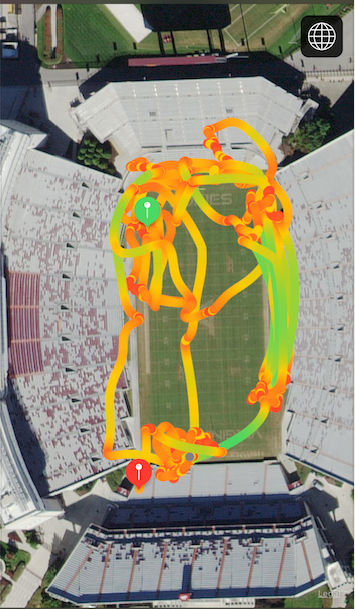 Second half, I spent a lot more time on the Virginia Tech sideline, sitting in the corners of both endzones during six overtimes, followed by a mad sprint from one field goal post (post-South Endzone Crushing) to the other before finally leaving the field. 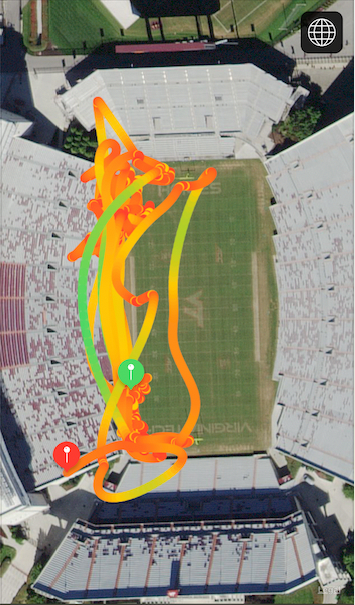 The entire photo gallery and every photo I've ever made for The Key Play is available at photos.thekeyplay.com. Enjoy!

That Keene picture is fantastic. The look on Mitchell's face is clearly "daaaaayum"!

Yep, someone needs to send him that picture. He's not a recruit, so he is fair game for tweeting, right?

These are awesome. I always love reading these photo write-ups. Thanks for taking the time.

Corps + Edmunds or QP through the hole are my favorites.

Edmundi in the house? No wonder we won!

Great job! There is nothing like a good truck!

Most people don't realize that Tenuta is actually standing next to the fan in the CAT hat.

QP running through that gap has got to be the best pic here. There is just something about it.
Gives an old school feel of some smashmouth football. It may be the pic we all look back on and say that is where it began.

that is where it began

Mumansky! This is some epic stuff. What a story!

Amazing shot. It reminds me of the photo of the massive hole Notre Dame opened up against us on that 97 yard TD run last year. I'd like to think that's the sign that things are finally clicking for this team after struggling over the last season and a half

Sooooo, was the ref trying to hide behind the down marker guy? He looks scared to death.

Deablo is a large man. I would hide as well.

There it is! Great view of that Hazelton one-hander.

Good use of the location tracker, do you actually run down the middle of the field or is that just another error?

It is a great view. And clearly there is no pass interference. None. At all.

That is absolutely me running down the middle of the field, either before kickoff during pre-game ceremonies, or after the final whistle. The post-game one is actually more of a run (sprint) to get in front of the chaos, pre-game and usually during the game I try to walk.

Overtimes were definitely a sprint along the sidelines though, especially at the end when it was two plays, then switch sides, then repeat.

Are you going to let Ford use that pic as part of his, "I'm ready for the NFL" portfolio of outstanding plays?

great pictures, thanks for sharing.