Thomas explains his decision to commit to the Hokies and his coach delves into his game. 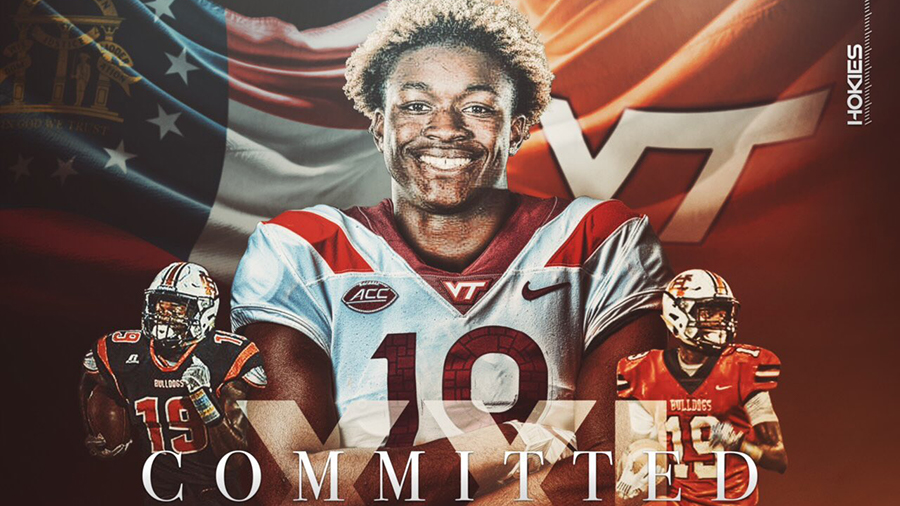 Virginia Tech plucked the latest commitment in its 2021 recruiting class from the Peach State. Malachi Thomas announced his verbal pledge to the Hokies on Wednesday.

"It's a great culture, I love it," said Thomas. "They treat everyone like family. It felt like home whenever they talked to me and my family. Felt like I could fit in the offense that they do, and I feel like I could help produce if I go there."

Credit Adam Lechtenberg and Vance Vice for earning his commitment, which actually happened Saturday. However, Thomas delayed a public announcement so he would have the opportunity to inform his teammates in-person.

Vice had a family connection, he coached Thomas's father, CJ, a former offensive lineman. While Lechtenberg endeared himself to Thomas with his straight-forward, accessible and honest approach.

"He was very excited," said Thomas of Lechtenberg's reaction to his commitment. "He was happy to finally tell me that I was part of the family. He let me know that, and they were very happy to have me onboard."

The 6-0, 183-pound Hart County product is unranked by both 247Sports and Rivals. Although, he held offers from Duke and Kansas State among other non-Power 5 suitors, and last season was named Georgia Class AAA offensive player of the year. He racked up 1,942 rushing yards, 638 receiving yards and 36 touchdowns.

"They told me about their run scheme, and I'll basically be doing what I'm doing now in high school," said Thomas. "Lining up in the backfield, slot receiver splitting out wide, being used as the jet sweep guy, inside zone and outside zone, power back."

Expect Tech to also leverage Thomas's frame blocking on the edge too.

"We actually went over our film and their film together to show how the plays are," said Thomas. "And went over some blocking schemes, cut-ups of me blocking this year and how they use their running backs to block."

Put simply, Thomas's versatility fits the various responsibilities of a running back in the Hokies' offensive scheme. Hart County head coach Rance Gillespie, who spent time in the college ranks most recently as Georgia Southern's co-offensive coordinator and quarterbacks coach, described him as a slasher in the backfield.

"He's got a really good jump cut," said Gillespie. "The thing that makes him special is his skillset is so varied. He can do so many different things. The kid has unbelievable vision. He sees things really well. Very rarely in our zone scheme we're sitting there going, 'Golly, how'd he miss that?'"

Gillespie likened his game to Saints standout and Norcross HS (Georgia) product Alvin Kamara's, and not the, "5-11 stump that's going to run you over", as he put it.

"He's a six-foot kid that's 183 pounds right now, that will play, no doubt, next year at 190," said Gillespie. "He's kind of a long guy, with really good ball skills. Now he's tough as sh-- and he will run you over. He's more of a longer kid that you're going to do a lot of different things with."

In addition to his ability to see the field and catch the ball, part of the allure of Thomas operating in open space is his elusiveness.

"He's got the ability to make you miss in a phone booth," said Gillespie. "I'm not saying it's explosive speed, it's more of a wiggle with his hips. He's like trying to tackle a rubber band. He's very flexible."

What really stands out to Gillespie though is how easy Thomas is to coach.

"He is a kid that you can meet with, and have a college-style meeting and say, 'Look, I want you to do this, this, this', you go to the field and he does, this, this, this. He's very mature, very focused," said Gillespie.

"He's an authentic kid," Gillespie added. "The 'yes, sir', 'no, sir', high character is not a show, for you or for a recruiter. It's authentic, it's who he is. He comes from a good family. His momma and daddy have done a really good job establishing good core values for him. He's been low maintenance."

Given the COVID-19 dead period, Thomas has not visited Blacksburg yet, but he plans to make an unofficial trip this weekend. Should the possibility of official visits happen this recruiting cycle, Thomas has no plans of exploring other options.

"I'm going to go ahead and close it," Thomas said of his recruitment. "I just feel very comfortable with where I'm at right now with Virginia Tech."

"Being used as the jet sweep guy"

Yep! At least a dozen times a game!! Welcome Home!!

I hope we continue to recruit that school to get more HC quotes; "golly, 5-11 stump, tough as s*!#, trying to tackle a rubber band"... That's some quality quotin' there

"Like trying to tackle a rubber band" and "...ability to make you miss in a phone booth."
Our D could have used a guy like him to help scout/prepare for a certain pair of QBs at the end of last season.
Sounds great to me!

Thomas has no plans of exploring other options. "I'm going to go ahead and close it," Thomas said of his recruitment. "I just feel very comfortable with where I'm at right now with Virginia Tech."

You can check out more of his film here: pic.twitter.com/PaK9sTiDwY— Delph (@Delfleppard) July 22, 2020

Breaks tackles, catches they ball out of the backfield and returns punts. O yea and just runs over a guy.

His vision really stands out in that film. Excited to see what he brings to the table.

I couldn't agree more! GREAT VISION. He sees openings and holes and takes them. I understand running the called play, but if there is no opening, make a cut where you see the green. Then when contacted, he doesn't just shut down, but make the D tackle him, if they can.

Now just get him enrolled. I hope he is true to his word about "shutting down recruiting".

What stood out to me first was his effortless running style that looked like Kevin Jones. He looked like he was out for a leisurely run and no one was keeping up. Jones often looked like he has jogging. This could be just HS competition, but I love seeing this.

I had this same thought. Excited for this pickup!!!

Was it just the size of his school that kept him from getting evaluated/ranked already? Because between his size, which at worst makes him seem like a worthwhile project for a college strength coach, and those gaudy production numbers it's surprising to me that he hasn't already been looked at by the recruiting services.

It's an oversight by the recruiting services for sure. I'm sure the fact camps didn't happen compounded the matter some (at least for Rivals).

What really stood out to me is he's receiving college-level coaching. That's huge from a developmental standpoint. And as Gillispie mentioned to me, it's all about fit. His skills match what Tech's looking for.

Now that he's committed to Tech, Alabama and Clemson will probably give him a look and try to flip him.

We do the work, they try to steal the prize.

Not the biggest school, but Hart County HS is 1k kids. It's right across the Lake from where I grew up.

My high school in the suburbs of Richmond have graduating classes around 450-600. I thought that was pretty average for a high school.

The high school I went to in Anderson, SC (across the lake) has an enrollment just south of 2k.

I was curious, so I looked it up, Georgia goes up to 7-A, his school was 3-A. So obviously not one of the smallest schools in the state, but at least on the smaller side.

Yeah, Georgia has those massive schools in metro Atlanta that require extra As.

Those massive schools must be heavily recruited by.... wait for it....

Good for him. Good for VT.

Just wanted an excuse to post this clip, never gets old.

The sound of that collision is tattooed in my brain all these years later. Unforgettable.

Are we sure the coach isn't a woman on a dating site?

That is not the coach speak I am usually accustomed to, but I am quite happy to hear it. Seems like a great fit for us.

His running style reminds me a bit of D. Evans.

Reminds me of a mix of LaDainian Tomlinson and LeSean McCoy

His Hudl lists an insane 47.3'' vertical, which would be an NFL combine record. Also about a foot above Adonis's...

Whatever happened to Adonis?

Rams practice squad. Got picked by WAS in the supplemental draft

We should have a Hokies in the NFL thread every season to keep track.

You're right, we should. How about you create one and maintain it?

Hand the ball to him and let him take that six-foot stump and wreck the defense.

Any old guys remember "The Malachi Crunch" from Happy Days? First thing I thought of when I saw this discussion. Here's to hoping he gets to crunch a few Hoos and Heels.

Like Malachi's potential a lot! His wiggle, frame, and vision seem like good a great starting place for a 2-3 down back in a few years. If he can add some bulk and retain his wiggle and vision, he seems like the kind of guy who will consistently and dependably get 4-10 yards a carry, despite possiblye lacking the topend spead to break a 70 yarder. I'd guess screens and jet sweeps in the short term.

I like the runs at 3:15 and 3:45 the most. His patience for setting up blocks before slashing is fun to watch.