67. CALEB FARLEY, CB, VIRGINIA TECH
Targeted 50 times this season, Farley locked down receivers in his coverage better than almost anyone else in the country. In fact, of all cornerbacks who saw at least 25 passes thrown their way, Farley finished second with just a passer rating of 29.2 when targeted. As an example of how impressive that is, a quarterback receives a 39.6 for simply spiking the ball every play, and therefore, signal-callers were statistically better off by throwing the ball away than by testing Farley's coverage this season. He allowed just 19 receptions for 265 yards and one touchdown against four interceptions and another nine pass breakups. He was one of the stingiest cornerbacks in the country when it came to limiting plays, and he did so all across the field.

He lined up in press coverage on 99 snaps and was impressive in both man and zone coverage during his incredible 2019 season.

Here is a link to the full article (which is being released with like 25 more players each day).

I think his absence played a big part in the UVA and UK L's.

He is definitely a difference-maker. I think most probably under-estimated his value in those games (especially Kentucky) prior to the game. It's no coincidence that we gave up more big plays in those games without him in the lineup as his presence influences the opposing teams game plans at this point. I hope he gets healthy quick.

So fucking glad he's coming back though

Out of our other player losses, I would have been most concerned had Farley left. Glad to have him back!

Upvoted for "a historic" instead of "an historic"

Not sure where he is going to end up, but I'd bet on Micah Parsons being near the top of this list, top 5.

As far as Farley is concerned, I have always harbored reservations about his skills as a corner, but it looks like I'm going to have to just admit that I was flat out wrong about him.

Imagine where this defense would be if the coaching staff kept him at WR?

I'm 2/2 on believing in and defending maligned CB's on TKP with Stroman and now Farley. I feel good about giving myself a little props on that haha.

Hate to burst your bubble, but all props clearly must go to the Jersey... CB#3

And like lots of the armchair coaches on message boards wanted too...

So, the new nickname for CF is Gandalf?

Dang..I didn't realize he had THAT good of a season. No wonder there were some talks about him leaving early

He'll put up good combine numbers and would have been a mid/late round pick this year.

His quietly stellar 2019 is getting him preseason all-american chatter, so if he performs similarly next year with the additional exposure, he could become a day one or two pick.

His game against FSU still gives me chills. Granted it was the previous season, but a great coming out party. 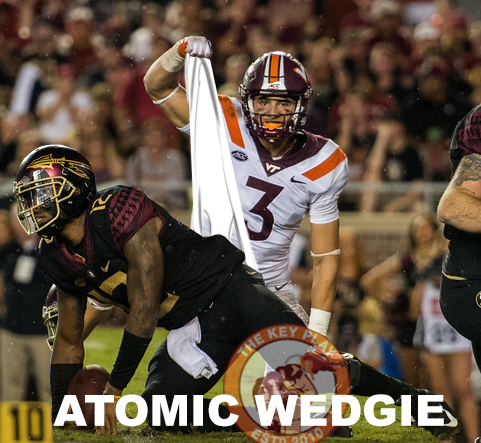 So glad he is not in the portal or drafting yet, one of the lone bright spots from last year