ACC revenue down 2% per team allocations down. Impact to budget at Tech and other ACC schools.

ACC schools already are seeing less money (this doesn't account for what may happen going forward. Per school payout is below PAC12.

#UVA AD Carla Williams, on financial impact, projects "anywhere from a 15 to 30-percent shortfall, and that's if we have an uninterrupted football and basketball season."Said all employees making over $100,000 - and some below that - have taken voluntary pay cuts. Budget cut 10%— Mike Barber (@RTD_MikeBarber) July 10, 2020

Major budget cuts at programs that bring in a lot more money than Tech and are seeing major budget cuts. Where does Tech go from here the next 6,12,18 months?

FSU's athletics budget last year was around $108 million. So this cut likely will be well over $20 million. And that's probably assuming they do play some form of football season. Whew. https://t.co/U2BZ1yvuBs— Ira Schoffel (@IraSchoffel) July 10, 2020

Forums:
ACC Board
DISCLAIMER: Forum topics may not have been written or edited by The Key Play staff.
Tweet 0 Share 0 Email to Friend

Thanks for sharing. Has VT's cut of the ACC pie been published yet?

As far as operational cuts go, if we spend roughly $95M last year, and we need to cut spending by 30%, that means we need to decrease spending by about $28M... 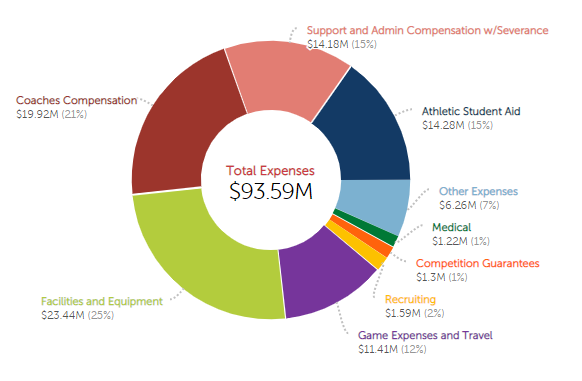 To be a D1 school, schools must field teams in at least seven sports for men and seven for women or six for men and eight for women, with at least two team sports for each gender. Currently, VT has:

If there is no football season, all athletic departments are going to be gutted. 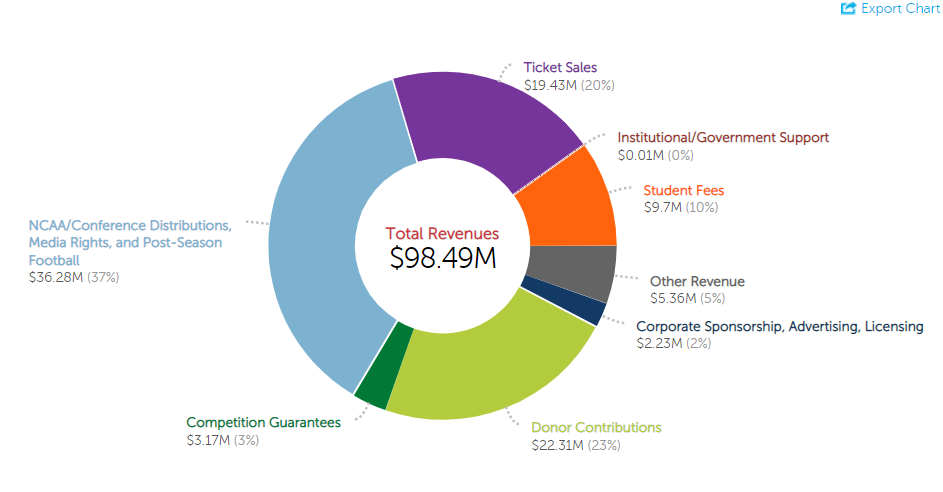 You look at the big chunks...

We're looking at at least a $40M revenue cut if football isn't played - and that's if basketball can be played - if we have to go a year without either, you're looking at a deep cut.

If football season doesn't get played at all I'll be interested to see how many programs shutdown for at least a few years of not for good (the north Alabamas etc) and how many other sports programs are eliminated outright.

I don't see any FBS programs shutting down the money potential is still too great. What I hope this does is end the massive rise in salaries for coaches.

It won't. They still under normal circumstances generate way more revenue that they cost in salary. It's still an effective value proposition to shovel money to get a good football coach for basically all P5 schools.

Yes at Alabama not at Purdue or NW, or WVU.

Similar to NFL quarterbacks. The best is priceless but allowing the best to set the market ends with a pile of lopsided money with no ROI.

Hear, hear. I still scratch my head every time a GM signs a non-elite, non-top 5 QB to a huge contract. After top 5-ish, they're pretty much all the same. IMO you're far better playing a rookie contract QB or low paid journeyman and spending the money saved on a half-dozen starter level players and more depth until you're lucky enough to stumble into an elite QB.

If it wasn't smart business, the AD's wouldn't all do it. Some would, but since all of them do, its likely the right move. Jeff Brohm makes 4.8 million and the football revenue alone (not Big Ten money or TV money) for Purdue is 7 million. I think the value is there.

It's really hard to call sports "smart business". The clippers were the best business in the NBA for years because they didn't try to win. How many times has some one gotten an HC position in the NFL solely because they were previously a HC.

I think that CFB might even be worse than pro-sports because a lot of funding comes from donors, which are operating on emotion not business decisions. At some schools you can make a lot more money being bad l, because some one will always pay you to get a new HC.

For VT winning is probably more important because it's a bigger bowl slice, it's a better Nike deal next time around, and you can get donations off of the wins if you advertise it correctly. But look at OkSt. They have Boon, he pays the bills. If they lose, he'll go buy them a new coach. Big time donors change what is a good business decision. In addition, how much money does Vandy bring in? They can lose every game and no one seems to care. The TV deal takes care of them. So as long as they are fine with losing a successful coach (when they have one), then they shouldn't pay lots of money.

Maybe not shut down, but I think this could be the impetus for NCAA football to eventually morph into a collection of legitimate juniors leagues where each current NCAA conference operates as a legitimate developmental league for the NFL, much in the same sense that the OHL and CHL operate in hockey, just with an overall coming together for a juniors/collegiate national championship at the end of the year.

Helps take a lot of the financial burden off the schools themselves while possibly being able to make more money in the end through NFL partnerships (and possibly NBA, MLB, NHL, and maybe MLS, if the idea spreads).

I like this concept, but as full time athletes, maybe even pay the players a stipend, and if they don't make the NFL, they can then attend the school for free (maybe cap within 5 years time), as they've been paid revenue generators for 3-4 years. Oh yeah, and cap the years available to 4, to limit transfers, and push the emphasis on a future diploma opportunity if football does not work out.

Just introduce a College of Athletics at each school through which students can get a degree for their studies. Which, their curriculum would be set up through consultation with the professional leagues much like what we have done with the DC campus through Amazon. And then offer classes like introductory to coaching or scouting so students will be set up for a variety of careers in their field should being a full time athlete at the next level not pan out.