Great preseason vids from Hokie Sports (click load more at bottom to get to "paper boy' link. Worth a watch
https://hokiesports.com/sports/mens-basketball

Bold prediction: we have a 1st teamer all ACC player at the end of the season not named Aluma

I think we were picked to finish 5th in the acc? The disrespect!

I'd have us around there too.. Big questions on defense IMO.

Bede was our best defensive guard, and Radford close behind. Replacing them with Murphy (polished offensive player, but ??? defensively against ACC level athletes) and Cattoor (good positional defender but doesn't have the athleticism to be an elite defender) seems like a rather big step back in defensive capabilities.

Excellent point. I mentioned below that the depth will determine how we do this year, but the defense will play as big of a role. We have starters who can fill it up and let it fly, but defense is a big question mark. Mutts is a very good defender. Aluma can do a good job as well. The backcourt is a big question mark. Murphy is a little guy and might face some tough matchups against ACC point guards. Cattoor, I'm not so sure. I seem to remember Alleyne having some trouble on defense in the past, hopefully he's improved. The bench players, I have no idea.

I recall late in the year, Cattoor playing some great man to man D. Seemed to really be dialed in

Just looking forward to watching some great coaching from CMY. 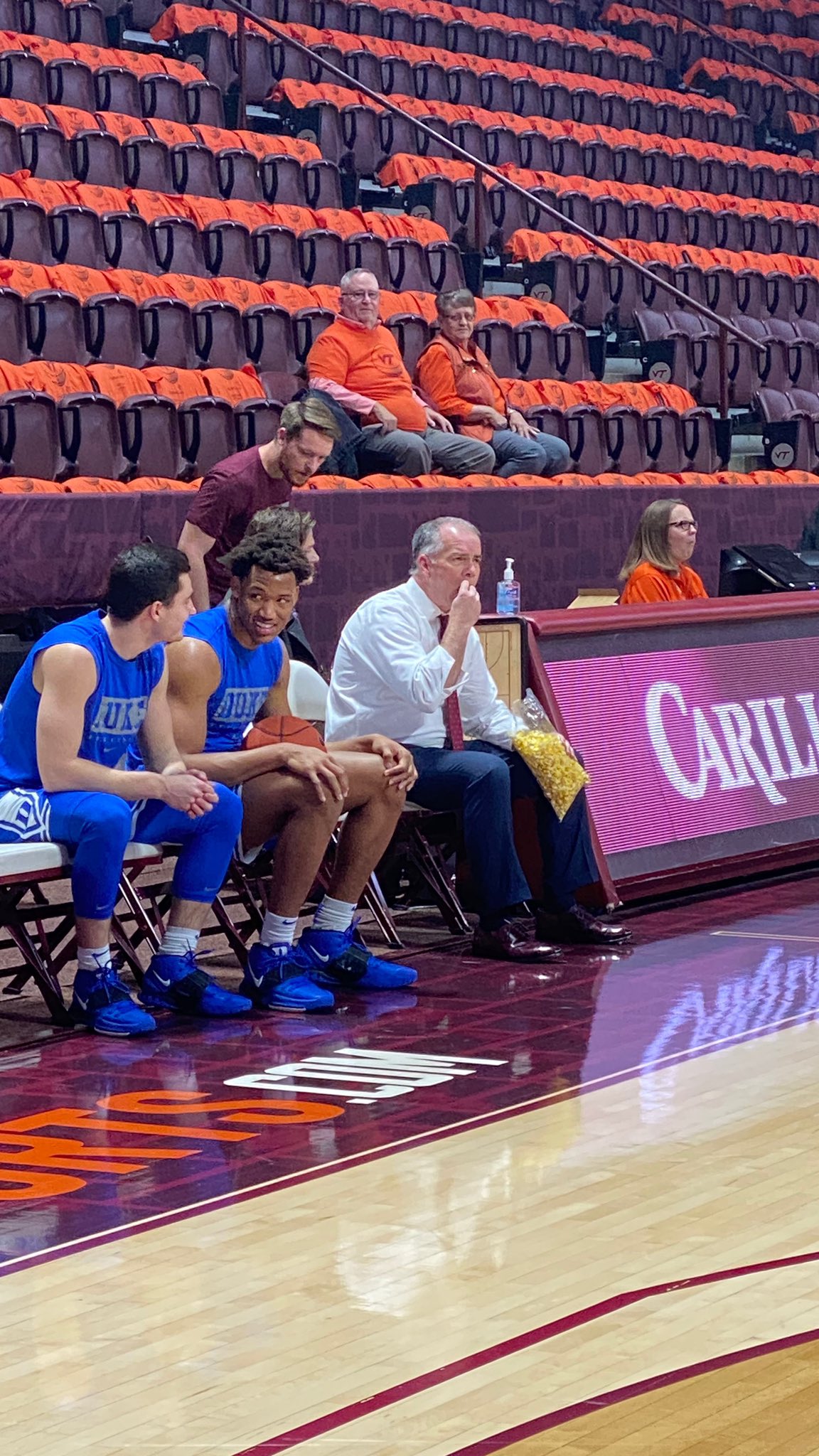 What is going on in this picture? Why are there Duke players on the bench with CMY?

And why are there t-shirts laid out on every seat, and only two people in attendance?

So many questions with this picture.

#2: Mutts. He'll be able to slide out to the perimeter more, now that we have Aluma at the 4, and can use Kidd, Ojiako, or N'Guessan at the 5.

#3: Murphy, Alleyne, Cattoor, Maddox, Mutts provide depth at the guard position. I would not expect Pedulla to get a lot of run this season.

Just really want Pedulla to be adequate enough to keep Cattoor off the ball when Murphy needs a blow. . He's a serious shooter so I have hope.

This is a good take. Cattoor scores more at the two and he doesn't take to many guys off the bounce which means there's not a lot of drive and kick. I think Padulla spells Storm at least in the early going. Coach will see if he's ready.

I'm not sure in what world N'Guessan is a five. If he plays with Mutts and Aluma, I assume Aluma is the five.

Mutts is not a guard, but he'll probably see limited action at the 3 for bigger sets. I assume he'll mostly play as an athletic 4, as he should.

Pedulla will see 5-10 mins off the bench. He's the only other point guard on the team besides Murphy. Mike Young said he'll play some right away.

I have same hope for Pedulla. Here he is up against Keyonte George (top 10 talent). Couple TO's but he sure looks the part.

Read the comments from the video. Folks are giving Sean mad respect for his play. Consistently stating a 3 star going toe to toe with a 5 star.

How can you have a title like that and no Monty Python Gifs?!

At least we have a truly honest, humble and strong head coach!!

Off the bench, N'Guessan probably gets the most minutes. Maddox will have to take a big step up and play pretty legit minutes as the main backup on the wing. Kidd/Ojiako will eat up some minutes in the post. Hopefully at least one of them can play at an ACC level by now. Pedulla should play whenever Murphy is out of the game, which is probably only 5-10 minutes. If he's not ready enough to play against the big teams, Cattoor could slide over for maybe 5 minutes a game, even though he's not really a PG.

IMO if those 4-5 (very inexperienced) bench players step up (and we stay healthy), we can make the 2nd weekend of the tourney. If the bench guys can't step up, while the starting lineup is very good, we probably peak at round of 32.

Spot on with this.

BILLY MAYS HERE FROM OXICLEAN. ARE YOU TIRED OF FEELING UNDERWHELMED BY YOUR SPORTS TEAMS? DO YOU FIND YOURSELF WISHING TO CHEER FOR A SQUAD THAT IS ON THE RISE? WELL I HAVE THE PRODUCT FOR YOU: VIRGINIA TECH MENS BASKETBALL.

Let me tell you why you want this product:
-They don't play down to their level of competition. Wanna see a team beat the teams that they're supposed to beat? VT HOOPS DOES THAT! NO ODU SLIP UPS HERE.
-VT Basketball has over the course of the last few years proven to punch above their weight class. Wanna have actual hope that a VT can take down a higher ranked opponent in prime time? VT HOOPS DOES THAT TOO! Since 2018 VT has beaten NINE top 25 teams, FOUR of them were ranked in the top 5!

ALSO WITH THIS PRODUCT YOU GET A SUPER LIKABLE HEAD COACH, AND ASSISTANT COACHES THAT HAVE A PROVEN TRACK RECORD OF EXCELLING IN THEIR AREA. MIKE YOUNG IS ONE OF A KIND, FOLKS. 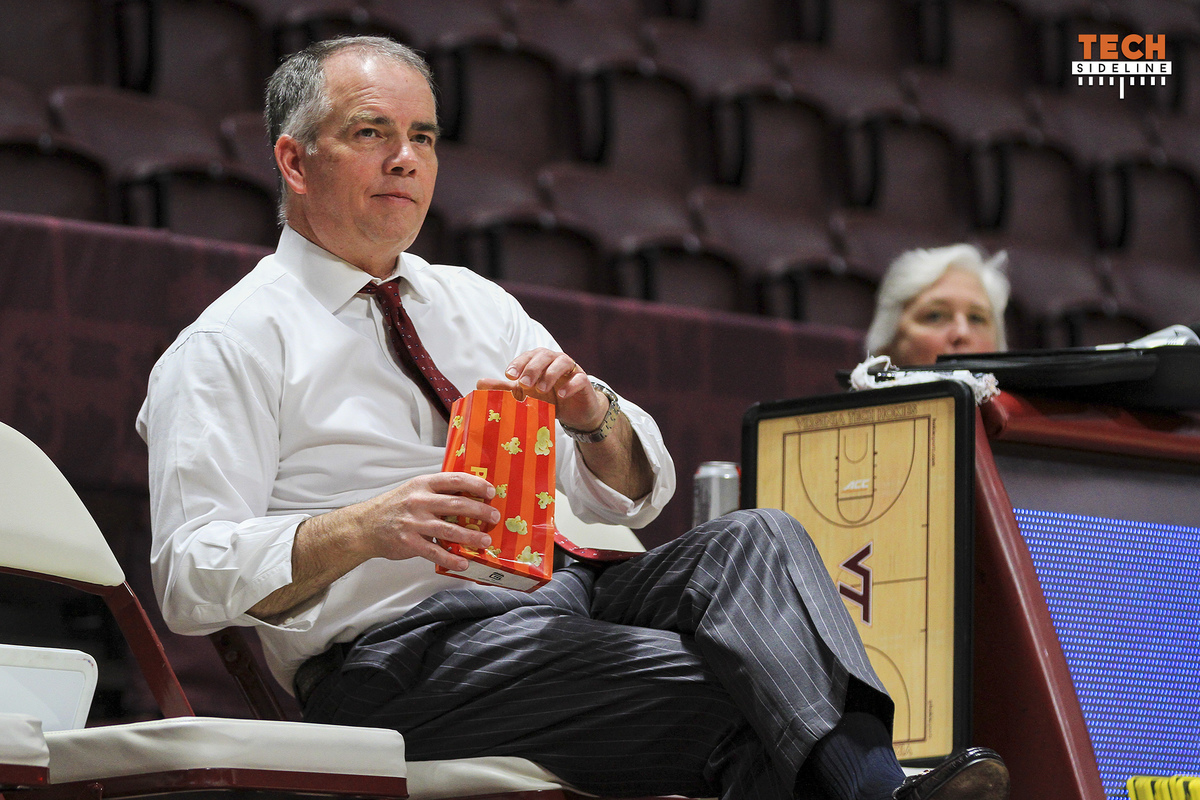 WHEN YOUR VT EXPERIENCE JUST ISN'T ENOUGH, SUPERCHARGE IT WITH BASKETBALL!

well I'm sold. Look at his beard. How could a man with such a beard tell a lie? #BillyMaysForever

Does it come with free shipping and handling if I order in the next 15 minutes??

FREE SHIPPING AND HANDLING AND I'M SO CONFIDENT THAT YOU WILL LIKE VIRGINIA TECH BASKETBALL THAT I'M NOT EVEN ALLOWING A RETURN POLICY. ENJOY YOUR FINAL FOUR RUN.

So in all seriousness a starting line up of Murphy, Cattoor, Alleyne, Mutts, and Aluma wins us A LOT of games. If Boots had stayed we would have won quite a few more, but I don't fault him for doing what he things is best for him and his family. That said, we do need to find a way to replace what Boots brought to the team, and it's totally cool if those things are picked up by different people.

We will need someone from the guard spot to: snag a lot of rebounds (Boots was very good on the boards), be efficient at creating their own shot, and can be counted on to drive and get to the line when everyone else is in a cold spell shooting the ball. We have plenty of talent, and I'm confident that we will have a player or two that doesn't have a lot of minutes to their career yet that can step up and help with the work.

On that note, the lack of experienced depth is a concern, but if I'm being honest this may be one of the most talented benches that we've seen. Unproven, yes, but talented. Lynn Kidd is a 4 star PF before he went to Clemson, Sean Pedulla had a ranking of .9235 coming out of high school, Darius Maddox is also a 4 star guard who hasn't played much, and I really like what David N'Guessan can be for us. While it's true that there's not a lot of minutes or experience in this bench, the stage is set for one of these guys to get in the spotlight in a big way. This is a big change from years past where, outside of the starting five, we had a role player or two and a couple walk-ons.

At the end of the day, assuming no major injuries or COVID-related issues, I think we land somewhere as a 3-6 seed in the tournament and that's a damn good place to be. On a personal note: I'm so damn excited to be back in Cassell again that I can't even put it into words.

Heck, I have had my men's tickets for a while now. Today I broke down and bought a pair of the women's tickets! They could be better than the guys.

1. I hope so. We were told the same thing about Wabissa Bede multiple times, and it just never happened. N'Guessan has a prettier shot than Bede, though, so I am hopeful.
2. Likely no one. However, the points lost from the absence of Radford's offensive rebounds will be supplemented by the fact that there will be more spacing and better perimeter shooting with him not out there. I think defensive rebounding will be fine.
3. We are one injury away from being in a little trouble. I never thought I'd see the day when VT basketball has way better frontcourt depth than backcourt.
4. N'Guessan.
5. I agree. I also think it's possible N'Guessan gets Most Improved Player.
6. Just like Willie Byrn.

Edit: had a grammatical error I was disgusted by.

has a prettier shot than Bede

- this team is very deep at the 4/5; probably 40+ years since we've had that kind of size/depth; total transformation since MY year 1
- opponents can't really afford to double anyone; all of the guards and even 3 of the big guys are legit 3 point threats. so who will attack the basket? maybe everybody
- a silver lining in losing Boots is that Pedulla and Maddox will be in much better position to play significant roles next year while Rice and Collins get their feet wet.

I think there will be a surprise in the starting line up, either Maddux or N'Guessan.

I get the feeling that CMY likes having a stud on the bench to bring in and play starter minutes. I just have a feeling this is Cattoor, who can spell Naheim or Storm.

Cattoor just gets better every year. His first year he was a shooter and scrapper for the ball, but his technique was rough. Looking forward to this year.

Most definitely could see it. Puts less pressure on Maddux and having Cattoor paired with Pedulla gives Pedulla a experienced backcourt mate who can handle point

It sounds like N'Guessan will start. I would put money down on Murphy - Alleyne - Mutts - N'Guessan - Aluma.

If N'Guessan has improved his shot then I like it. Hunter can come off the bench and give 1-3 rest and you have Big John/Kidd to spill the bigs. Teams have made runs with a 7 deep rotation but a lot hinges on guys staying healthy. I would feel much better if Maddox takes a leap forward or Pedulla is ready for some minutes early.

Anyone know how the scrimmages against Liberty and Richmond went?

From Mike Young about Storm Murphy:

he'll look like your paper boy, but I'll tell you, he's mean as a snake and he knows what he's doing