Hokie Hoops- Decision on the Horizon for Rodney Rice 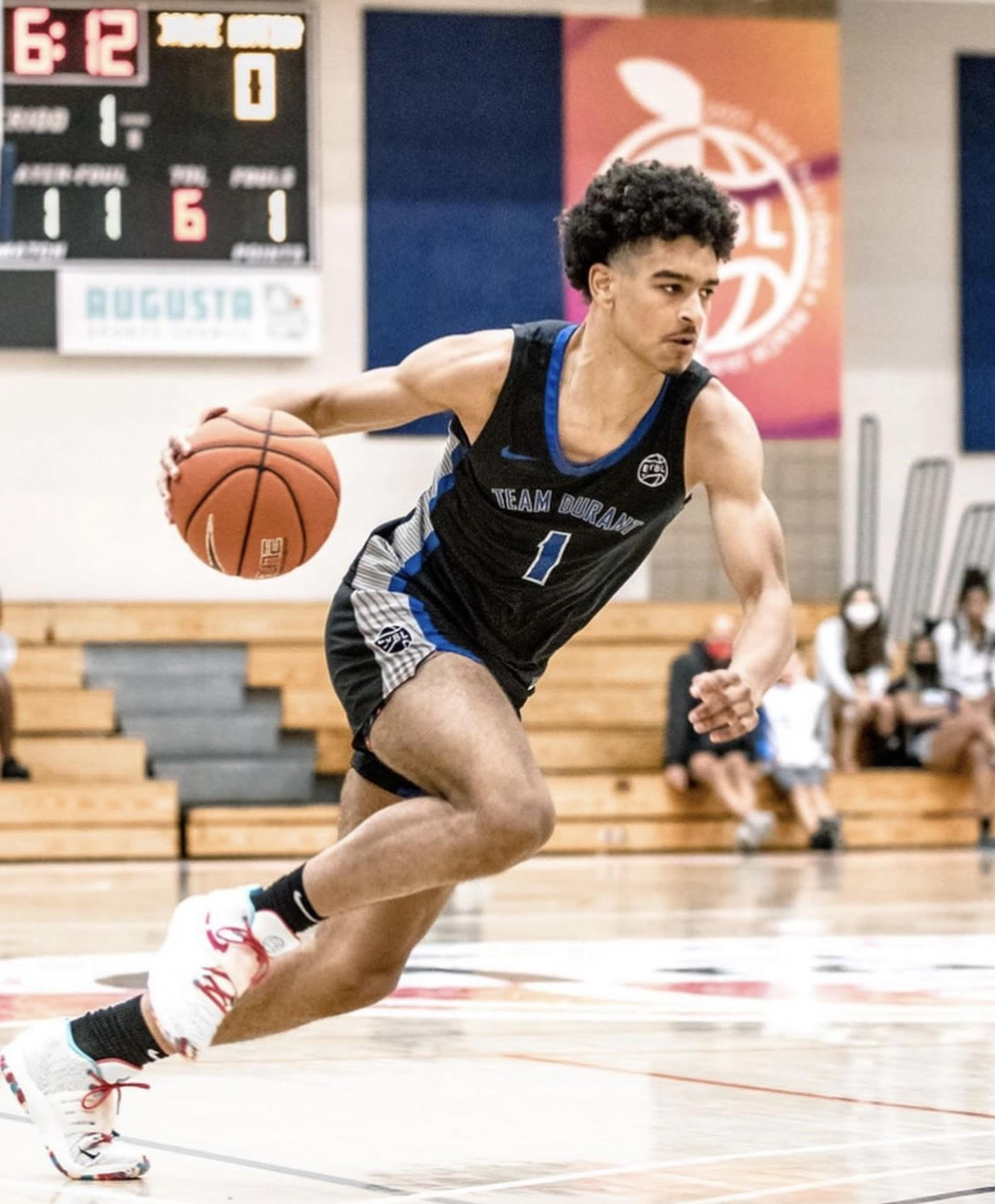 According to a report from 247 Sports, Rodney Rice will not be taking any more official visits. After his latest trips to Louisville this past weekend and to Virginia Tech the week before, the ESPN and Rivals Top 50 guard has a lot to think about.

Rice was on-hand for an official visit to Virginia Tech on September 3 when the Hokies beat #10 North Carolina under the lights of Lane Stadium on national television. Hokie fans brought their 'A' game, embracing Rodney in a wave of electrifying noise and excitement, rushing the field, and sharing with him what makes Virginia Tech's fans the best in the nation.

Mike Young, Mike Jones (Rodney's lead recruiter), and the rest of the staff have a lot to feel good about in Rice's recruitment. Cacophonous, intimidating game environments are just one of them. Virginia Tech's basketball program is thriving and on the rise under Mike Young's leadership, having finished 3rd in the ACC in just Young's third season. The huge cash infusion and renovations coming to Cassell Coliseum will bring our palace of pandemonium into a new era that matches our program's championship-level play. Virginia Tech's track record of player development is equally impressive, transforming every player to come in, regardless of stars or ranking, into the absolute best version of themselves on and off the court. And, of course, there's Virginia Tech's staff. Regarded as two of the very best basketball minds in the business, reigning ACC Coach of the Year Mike Young and USA basketball/DMV legend Mike Jones carry universally respected reputations as integrous, upstanding coaches who are proven winners. The young men who come out of their programs and have benefitted from their tutelage not only go on to achieve their dreams, but carry the reputation of the coaches and the program with them. That's big when your eyes are on the NBA- you can focus on your game without worrying about distractions around your program you can't control.

What would Rodney Rice's role be with the Hokies? That's even more of a no-brainer. Uno's The Guy. Rodney's name has been at the top of Virginia Tech's recruiting list for so long, they may as well have carved it into the whiteboard. Rice does all the things you want a guard to do and he does it all at a very high level. From my earlier profile on Rice:

What makes Rodney Rice such a terrific prospect? Name it. He's an elite shot-maker. He can whip a crisp pass in traffic. He grabs rebounds. He defends. He facilitates. He has excellent court vision and awareness. Off-hand? Wrong foot? Through contact? Doesn't matter. He gets buckets. But anyone who's seen him light it up in person against Paul VI or Gonzaga knows Rodney Rice is a capital-C Competitor. He has a brand of hustle and drive that keeps your eyes glued to Rice despite being surrounded by other great players.

The Hokies want Rice, a high-IQ, proven playmaker, to take the ball on Day One, play his game, and run the team.

If Rice was to commit to the Hokies, the dominoes for the remainder of Tech's class would tumble into place. Mike Young already has the attention of several elite recruits, and there's plenty of reason to believe a pledge from a tenacious, smart, and athletic floor general like Rodney Rice would be the move that makes them pull the trigger for Virginia Tech. Surrounded by talented teammates with a drama-free, proven coaching staff, the ceiling for Rice and Tech would be sky-high. The only question is how many titles Rice would win before hitting the NBA Draft.

No date for a decision has been set as of now. Rodney and his family will have a lot to weigh between his choices. Hokies everywhere remain hopeful and confident Virginia Tech's record of success, impeccable reputation, and supportive family environment will win out in the end, as Rodney plans his next chapter as an elite competitor, taking down yesterday's blue blood programs. Exciting times! Stay tuned!

Re-posting this thorough breakdown of Rodney's game from our friend Tyler McKittrick at Point Guard Eyes. Clear your schedule and tuck into this spot-on analysis and video clips.

How ya feeling about Rice after the Louisville visit?

Rice is a program-defining recruit for Virginia Tech. As I've pointed out elsewhere, he would be the third-highest-ranked basketball commit (0.9792) in Virginia Tech history between Chris Clarke (0.9765) and current New Orleans Pelican Nickeil Alexander-Walker (0.9860). As a fan, any time you have a chance to land a star like Uno, no matter how good you may feel, you still get butterflies.

Rodney is an impressively mature person. He is surrounded by smart, supportive, and caring people. He is going to make a thoughtful decision that is right for him. I know that's what our staff would want him to do, as well.

Honest question.. does Rice have one and done potential? Maybe two? I would certainly think so but I have not watched a ton of his tape.

I would never, ever bet against Rodney Rice, so for my money, yes.

I agree. I think there's no world where he plays all four years. Or at least where he wouldn't have the ability to get drafted high 1st round after a year or two.

There are 30 first round picks and 60 overall each year. In 2021 ten of those 60 didn't play college basketball.

The numbers don't favor the #52 rated recruit being a 1st round pick, let alone a high first round pick after 1 year or even 2 years.

We've reached the point where I've become irrationally invested in a recruit to where I'm gonna be bummed out for a long while if things don't go our way.

I was bummed about Nickel, too. But if you're going to follow recruiting, you gotta take the bad news with the good. Sleep it off! Short memory and PVO, baby!

Nickel was disappointing but I wasn't all that upset about it since it was UNC. Given what I knew about him following recruiting, the Heels were gonna be hard to beat if they pressed hard for him. They did.

But Rice? With his connection to Jones and how we've been hard after him for awhile and it seems like he's been leaning our way just about the entire time? I'm gonna be super bummed if I don't see him in orange and maroon. I got a bottle of bourbon ready. Just a matter of its celebratory drinks or consoling sorrows.

"In victory, you want champagne. In defeat, you need it." - Napoleon (maybe, idk, it was a quote in Napoleon: Total War)

It is attributed to Napoleon, however there is an adapted version from Winston Churchill, who had a very well documented love of Champagne.

All the good quotes are

We're just going to load up a bus with Hokies and camp out at DeMatha for however long it takes.

Rice is liking a lot of Louisville stuff on Twitter. Doesn't bode well for us...

Where are you seeing that he's liking a bunch of Louisville stuff? There's nothing out of the ordinary

Most of the stuff he's liking has to do with his visit/his friend who just committed to Lville. I'm not concerned. He liked a bunch of our content around his visit too.

Guessing or inside info?

I'll say this. If he commits this week its us. Anything pass that its loserville

I've got tweet notifications on... Waiting for that commitment date to drop.

What 17 year-olds are liking on Twitter is the kind of analysis I come to TKP for.

* as interpreted by fans.

If we land Rodney Rice, do we have to worry about Pedulla staying?

no, murphy is leaving, cattoor and alleyne are both juniors. there's going to be PT available

I wouldn't want anyone to leave, but I think Rice is a pretty substantial talent upgrade over Pedulla

Yes, but the ideal situation is like JRob/Bede.
Rice may be more of a dynamic playmaker but when he's in foul trouble, needs a spell, or gets injured, it will be great to have a steady experienced hand bringing the ball up and getting the O set.

Can Pedulla play the 2 beside Rice or we he and Rice both play PG?

Does not seem like we'd have the numbers to RS Collins

Is that the crystal ball equivalent of 800% committed?

Another 8 CB for us. This time from the Louisville insider😎🔥

I'm a known CB skeptic. But this... Does put a smile on my face.

That is some dirty talk you have there, Primus

My only question is do these recent CB picks mean that there is an announcement coming up in the next few days?

Seems like this week be wrapping up in the next couple of days, if not today. Louisville boards seem to have it on good authority that they will not be getting him.

Well it is wednesday. I hope the week wraps up in a couple of days

Produced, showed and personalized recruiting videos to prospects including their names and likenesses;

I had no idea that was illegal. With all the marketing pictures we see if athletes, a video doesn't seem like much of a stretch.

"Look how bad we want you. We committed recruiting infractions because we want you here." - Louisville, probably.

And Here we go😎

Everytime I see a new post on this thread I find myself hopefully clicking away for good news....Boom...

I know same, no news drives me crazy, I've been checking this thread for three days

I wouldn't expect it to happen tonight

Rice is committing at 4pm today, per his Twitter.

Since we're all social media sleuths over this: it was in fact liked by the VT Men's Basketball account, Mike Young, Christian Webster, and David N'Guessan.

Gottem. I don't Twitter on the regular... not a clue how to embed.

this is it y'all. The good old days of Hokie basketball start now

That's it. Shut down all football threads, we only cover basketball, pie/cake debates and movie discussions now.