Virginia Tech set a budget of $5.5 million for the team's 10 on-field assistant coaches and used all but $225,000 of that according to salary figures provided to The Roanoke Times in response to a FOIA request.

Adding in Andy Bitter's Tweet so the numbers are more legible

Having three coaches around/above the 750k mark is pretty notable. Im fine not having a 1.3M coordinator like a Bama or Clemson but spreading wealth like that shows we're committed to spend. Like it.

According to the article, only JHam made more than $500k on the previous staff. It does feel relatively balanced and they locked up the guys they felt are more key (DC, OC, STC and OL) to an additional year, which feels nice as well.

Rudolph set the scale for Bowen and Marve. Can't have a coordinator making less than position coach. Price is higher than expected, but really can't complain how the money is distributed.

Price really secured the bag. Happy for him!

Hope Rudolph turns out to be worth the money.

Looks like Rudolph made 675K at Wisconsin last year, for reference.

WORTH EVERY SINGLE DAMN PENNY....

These more competitive salaries will be helpful if we have to move on from assistants, or have flourishing assistants poached.

I've been looking around without any success, but has anyone found a table with the salary numbers for ACC schools in 2021?

USA today had numbers for a season ago, but not everyone was on it because it stopped at around 300k because to many coaches make above that.

Yeah, I guess analysts come out of a different pot of money?

Or it could be where the other 375k went to.

They might've only cared about the on field guys and the bigger off field new hires that were listed.

I dig it. This is how you establish yourself as a serious program.

Overall, I like where we are with this staff and seems like they are in a good Competitive Range

I don't think most schools reveal the analyst Salaries

It was a FOIA request. So, by law, VT had to release as requested by Roanoke times. It's probably not typical for newspapers to request the salaries of staff, but I'm guessing Roanoke times requested those salaries because increasing staff size and salary has been a huge emphasis with the CBP hire.

Its pretty typical, you can see lots of articles about other schools from their local papers if you search.

It's true. If we learned any lesson from Cornelson it should be that 90% of the time you get exactly what you pay for.

He owes us a lot of money back then

If you looked at VT salaries as a whole, we actually did as expected this year.

I've not been a Fuente fan, but these salary changes in light of his and his staff's dismissal to a degree is a response to what Fuente was letting Whit know - though through questionable means. This is somewhat of an indictment of where we were salary wise under Fuente's term - and I don't think Fuente was unilaterally responsible for where his staff salaries were.
So, to a degree, VT grew up through this process and Fuente and his staff paid the price for it.
I think this reality has to be considered when blame is placed for these past few years......

Edit: I don't think Fuente paid the price for anything related to staff salaries. The core of his coaching staff were all his guys who didn't leave. Fuente fell on his own sword for keeping Cornelson around, not the ability to pay people more.

There was money for a better D-coordinator. Fu didn't have to hire J-ham but chose to b/c his back was against the wall. He goofed on the decision and let appeasement of hiring former players and Bud's input outweigh hiring a more competent/ready/seasoned coach, which he drastically needed to bring some sort of structure to this fumbling staff. J-ham brought culture, eagerness, etc., and I love him, but he just was and is not ready. With J-ham being young, he would fall into line though with Fu's "strategy" of no strategy.

Would you have preferred Fu give more money to Shibest, Corn, Vice, etc.; folks who would have never left no matter what? I agree, he did help move the needle and get the money flowing, but in the process tore the program into shambles in so many different ways not related to the amount of money available for his staff. Positive from Fu era; he "assisted" in making the university, its leadership, and big donors more committed to football (again). However, I would say this is mainly due to the obvious, new landscape of college football and the results of his poor coaching which were a prime example of what happens if you fallback to G5 amateur hour and do not invest.

Or maybe the money was there but Fuente was the obstacle?

This is kind of my thinking too. I also wouldn't be shocked if he asked for more money for his guys and Whit withheld it until they proved they were worth it. After 2018, it was pretty clear that most of the offensive coaches were in over their heads. I wouldn't have just opened up the wallet to pay them for the sake of it. They had to earn it and they didn't.

For reference, here are some of the previous salaries:

Here's a summary of the deltas: 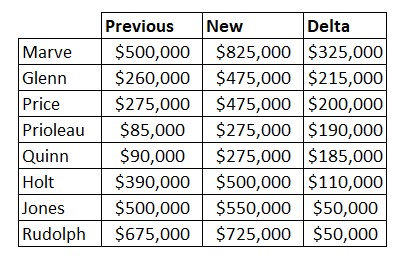 Both people with less than 2 year played for VT, have NFL experience, and have succeeded outside of D-1 so its really hard to not love those two hires.

We have a lot of money dedicated to dominance in the trenches. Absolutely love it.

So...random question, but where does the additional money come from when coaching pool funds gets increased like this between regimes? Is it just simply lying around in some kind of reserve savings waiting to be used or is it reallocated from somewhere else in the athletics department? Big donors? IIRC this is like 2 million more than Fuente had for this coaches, so where does it all come from?

I mean it's a budget, the numbers always work out.