The Hokie offense disappears in the Carrier Dome, as Tech falls to Syracuse 68-56. 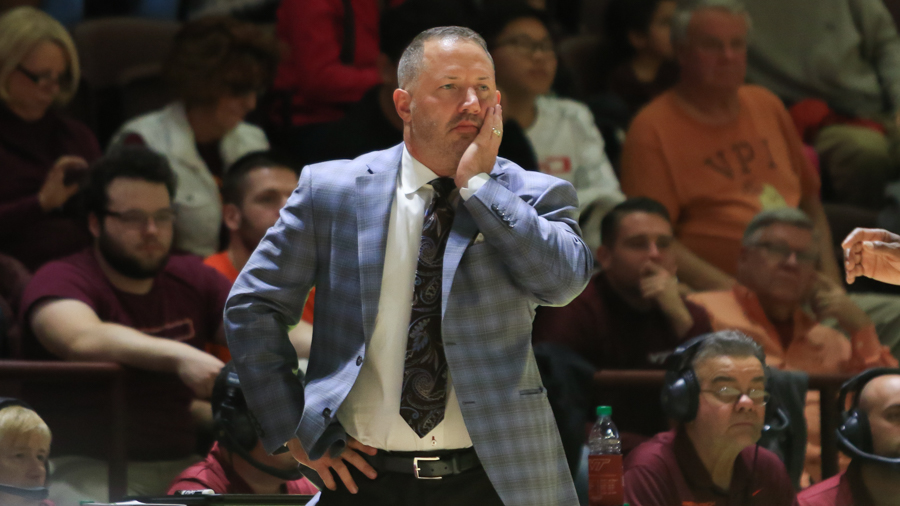 While many of us were figuring out the perfect way to ring in 2018, the Virginia Tech men's basketball team had the chance to start the new year on a good note. On the same day a year earlier, the Hokies opened the ACC's eyes with a demolition of Duke in Blacksburg. This time, they went on the road for another opportunity against a big name opponent to celebrate New Year's Eve.

To put it simply, it didn't go as well.

The Hokies played one of the worst halves of offensive basketball in the Buzz Williams era, as they lost their conference opener 68-56 to Syracuse in the Carrier Dome.

Though competitive for stretches, Tech had crippling scoring droughts filled with bricked shots and turnovers that lead to the Orange controlling most of the game. In the first half, two Chris Clarke free throws cut the Cuse lead to 17-16 with just under eight minutes to go. When the horn sounded for halftime, the Hokies had scored 19 points.

For those struggling with the math, that's a grand total of three points in over seven minutes of game time. You don't need a bevy of stats or analytics to know that's not ideal.

"The thing that hurt us in the first half was our turnover rate," Williams said in his post-game press conference. "Twenty-eight percent of the time we turned it over and so, when you're not making shots, in addition to having that high of a turnover rate, it somewhat only increases the value of the shots you are missing when in actuality, the problem is not that you're missing them, the problem is you're not getting a shot. I thought that was what ailed us today - the first half for sure."

The combination of cold shooting, turnovers, and the inability to penetrate Jim Boeheim's infamous zone were too much to overcome. And while giveaways have been (and will continue to be) an issue, the general belief was that Tech could bomb away from three. They were, in fact, the sixth best team in the country from behind the arc, and had torched Washington's zone earlier in the year.

But guess what? Syracuse is significantly better than the Huskies, and will be one of the toughest defenses Tech faces this season. Renowned sharpshooter Justin Bibbs went 2-9 from deep. Junior Ahmed Hill stepped into the arena shooting 50% from three in the month of December, but only hit a pair of his seven attempts against the Orange.

As Cuse's defense began to suffocate the Hokies with steals and length, the pressure to hit what open shots they had skyrocketed. What had been easy attempts in other games weren't as smooth, especially through the first twenty minutes.

"I think any time you're turning the ball over more than one out of every four times, it just seems choppy," Williams said. "It seems as though the three shots that you do get, you're putting more of a burden to make them, which over time, makes you more unsure, maybe, than you should be."

But it wasn't the cold start that did the Hokies in. Tech came out of the locker room guns blazing in the second half, draining shots and grabbing rebounds. They cut the Orange lead to three, and seemed to have them on the ropes. But it wasn't sustainable.

Boeheim made adjustments, and Tech couldn't keep the momentum going. Syracuse went on a 17-3 run over the next six minutes, and put the game away. In fact, if it wasn't for a late Hokie barrage when they were down 20, the final score would have looked as lopsided as the game felt.

Kerry Blackshear Jr—Tech's only post player over 6'5", and only real threat inside—was completely neutralized. He scored four points and grabbed four boards in just 13 minutes, as he battled foul issues and ineffectiveness. P.J. Horne was thrown in as his replacement for stretches, but looked every part the freshman.

If there was a bright spot to take away from the beating, it was the showing from Nickeil Alexander-Walker. The youngster had his best game in over a month, and finished with 19 points on 7-13 shooting. While I wouldn't get worked up over the scoring total (eight of the 19 came in garbage time), he did show an assertiveness in attacking that he didn't have against Kentucky.

Unfortunately, the ACC doesn't provide many get-right games. The Hokies look to get back on track Wednesday, as they welcome a top-10 ranked Virginia squad to Cassell Coliseum.

I heard a few grumblings about about this being a really bad loss for Tech, since this isn't an especially great Syracuse squad.

I'm not concerned, if only because weird things happen in the Carrier Dome. The Orange beat three top-ten teams at home last year, and they were worse than they are this season. Yes, Tech is the better group statistically, but to think this is a "bad loss" is completely discrediting what is very likely an NCAA Tournament participant on the other side.

I can't decide if Blackshear or Justin Robinson is the most vital to Tech's success. Because without Robinson, the Hokies look completely dysfunctional. Not that they can't run the offense without him, but it doesn't look nearly as crisp (despite having multiple veteran ball handlers behind him).

Blackshear, on the other hand, is essential for two reasons. The first is obvious: he's big. He's the only player with serious size on the roster, which makes defending the post brutal without him. But to me, it goes beyond that. His ability to space the floor makes the offense especially lethal when he's on the court, and he's worked hard to finish strong at the rim. That, plus his wherewithal as a screener in the pick-and-roll adds another layer for opposing defenses to account for.

I literally turned the game on and it was like 16-18 Cuse...then they fucking scored like 15 straight lmao. Then I turned it off.

Oh well, hope the team shakes it off and wins the next one.

I feel you on your point about Robinson. I don't understand why the offense completely goes away when Devin Wilson is running it.

Devin never looks for his own shot, and it really messes with the balance of the offense. If the PG is not a threat to score off the pick & roll nobody is going to help off their man or sag to the lane to open up another offensive player.

He's never been a great shooter but he has got to be more aggressive attacking the lane.

We needed someone to step up and dribble drive against a set defense, and draw contact, and occasionally finish. JRob seems to avoid the contact, and get his shot blocked, Devon is just not as skilled around the hoop, and NAW, Bibbs and Hills seem to play for long periods like they don't think they can beat the defense off the dribble. We look great passing, but need someone to put a
more dribble pressure to get the defense out of position so the passing leads to good looks.

All excellent points.
My opinion...
Bibbs and Hill: live by the three, die by the three.
Blackshear: being our best big man, he needs to stay out of foul trouble. his fouls should only come when going for rebounds. there should be no reach-ins and no slaps on the wrist outside of 10-15 feet. and no moving screens at the top of the key. one of his fouls against the orange was on a trap out near half court. no, no, no, he's too important around the basket. this year anyway.
Five: so goes 5, so goes the Hokies. what makes me cringe is some of his turnovers. I know as the PG it is his job to distribute the ball and thus a couple TO's a game is understandable. But when it gets to that 4th turnover it's usually because he is trying to force something or simply trying to be to flashy. in a +/- 5 point game, I pull my hair out, up by 15, meh.
Devin: smart and experienced. needs to spell five when we're up 7 or more points and when we need to slow the offense a little. would like to see Bede get more time in this roll too.
Clarke: Mr. Excitement!
NAW: don't think he is a one and done, but I hope we can keep him all four years. he'll get better with time.
Bottom line: I think the team has good chemistry and enjoys being around and playing for each other. Buzz has said it often, we need to VALUE EVERY POSSESSION. when the Hokies keep turnovers in the single digits, good things usually happen.

It would in interesting (I'm sure Buzz has done it) to breakdown JRob's drives to the hoop... my bet is that the percentage of TO's, misses and blocks vs fouls drawn, assists, and buckets is far too high.

I was flipping back and forth between this and the Ravens game. I couldn't decide which trainwreck to watch. Luckily I had an all inclusive NYE party. Not a good couple of days to be a Hokies/Ravens fan.

That arena is a huge obstacle when it comes to teams that never play there regularly and shoot the 3.

I don't take much stock in that loss.