Virginia Tech opened their ACC play with a stinker in Syracuse, and looks to bounce back against Virginia and Pittsburgh. 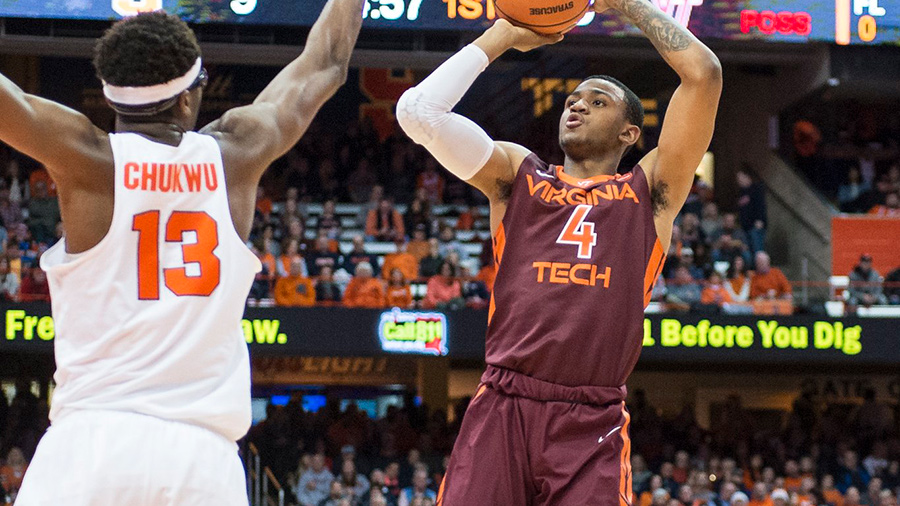 The Hokies opened conference play with a painful 56-68 loss. Virginia Tech moves to 11-3 (0-1) on the season. Buzzketball now turns its attention to a huge matchup with No. 8 Virginia in Cassell on Wednesday night, followed by another home contest against a bad Pittsburgh team on Saturday afternoon.

ACC play is a different beast from non-conference, and the Hokies learned that on New Year's Eve. Tech trailed by as much as 20, and eventually lost 68-56.

Virginia Tech was unable to figure out the well-known Jim Boeheim zone, shooting an abysmal 35% from the field and only 33% from deep. In the first half, Tech shot an awful 3 for 13 (23%) from deep. The three-pointer percentage from one of nation's best shooting teams improved in the second half, Buzzketball shot 7 for 17 (41%).

Tech pulled within three points after going on a 12-0 run early in the second half. The score sat at 34-31 with 14 minutes left. Unfortunately, the Hokies allowed Syracuse to answer, and the Orange countered with an 11-0 run to put the game out of reach.

Hindsight is 20-20, but Virginia Tech could've afforded to use a timeout during the Syracuse run ‒ a fact Buzz Williams addressed after the game.

"I should have used a timeout during their run," said Williams via The Roanoke Times. "But when we closed it to three, I thought potentially it was about to be a game, and I wanted to have timeouts down the stretch."

Nickeil Alexander-Walker had a great ACC debut. He led the team with 19 points, including a 4 for 8 performance from three. Tech will need more of that type of production from the freshman going forward.

Tech fans have known that for the Hokies to stay competitive in ACC games, Blackshear Jr. has to stay out of foul trouble. Sunday night proved that to be the case. Combine the loss of any sense of height in the post with a bad shooting night, and Sunday night turned into a game Tech had a slim chance of winning.

It's a phrase used in college basketball pretty regularly. It hasn't been something associated with many Hokie teams. That's not the case this year. Virginia Tech is a great shooting team. There's no denying that. But when the Hokies have a bad shooting night against an ACC squad, bet on them losing

Last season, Virginia Tech was a good shooting team. They also had Zach LeDay and Seth Allen to depend on for somebody to slash to the hoop when shots weren't falling. Those two are graduated and gone, playing in Europe. Justin Robinson is that type of player that can get to the basket, but he's the only guard to have proven that so far this season.

Until the Hokies can find a couple more consistent slashers, Tech will be dependant on draining buckets. And if those shots aren't brushing nylon, it won't end well.

Quote of the Week

Williams, when asked about ACC play this year:

He now has to do just that after what would be defined as a "bad" moment in New York.

Virginia is one of th‒

Virginia is one of the best teams in the country. There. I said it.

Everybody knows about the pack-line defense, and how good UVA is at running it. This season, the Cavaliers have continued their stifling ways on defense. But now they're quite dangerous on offense as well. According to KenPom, UVA rates No. 41 in adjusted offense. That's only 11 spots behind the Hokies.

Kyle Guy ‒ sans man bun ‒ leads the 'Hoos in points-per-game with 15. The Cavs can also turn to sophomore guard Ty Jerome. Against Boston College Jerome was the hero, scoring 31 points. That career high included several very deep threes. He's a dangerous scorer, and allows for Guy to get open as well.

Isaiah Wilkins and Devon Hall are two more Cavaliers that will cause fits for the Hokies' defense. Wilkins is a talented forward who can dominate the post, and Hall is yet another guard who can shoot.

"We should never talk bad about the Wahoos," Williams said last week. "No matter who they lose, they're really good. No matter who their players are, their results are eerily similar."

Bingo. UVA will be UVA. It doesn't matter who's on the court. The Cavaliers will come into Cassell and control the pace. The final score will be in mid 60's or 70's. That's how it will be while Bennett is the coach.

There is one major positive for the Hokies: Cassell Coliseum.

I asked #UVA's Isaiah Wilkins about Wednesday's game vs #Hokies. "Is it here or there?" Kyle Guy tells him its in Blacksburg, then says, "They're a different team (at home)."— Mike Barber (@RTD_MikeBarber) December 30, 2017

When full and loud, Tech owns one of the greatest home court advantages in college basketball. And I won't count the Hokies out against any team they play this season at home. Their ability to catch fire at any point combined with the raucous atmosphere can will Tech to a victory on any night.

That being said, the matchup on Wednesday night isn't a sell out. The students are on break, and there are at least 500 tickets still for sale on Virginia Tech's website. That doesn't even count the secondary market. Tech has defeated UVA during winter break before though (2015-16). The precedence is there.

In order to pull the upset, Buzzketball needs to be consistent from deep and try to force their tempo on the Cavaliers.

Pittsburgh is really bad. Like, "lose to Penn State by 31 points" bad.

As of Monday, ESPN's Basketball Power Index gives Virginia Tech a 96.2% chance to win. This game shouldn't be close, but it's the ACC. Again, anything can happen.

The Panthers are averaging 69 points per game, while shooting at a 44% clip from the field. Three of the top five scorers for the Panthers are freshman.

This game is one that the Hokies can't lose. Especially at home. Tech's tournament chance got slimmer with the loss to Syracuse. Those chances would all but disappear if the resume included a loss to KenPom No. 171.

Look for Buzzketball to try and push the pace against the young and limited Panthers. In the worst case scenario, this contest will give the Hokies the ability to reset after an 0-2 ACC start.

Syracuse is going to be really tough for us to beat, they remind me a lot of FSUs team last year (although much better coached) they are just abnormally long. they contested and altered every shoot that wasn't 3 feet behind the arc which is why our 3 point shooting % was so low. contested 3s and wild contorting lay ups are not high percentage shots. To beat them we need a better passer catching at the free throw line to feed the wings and a finisher on the baseline that can dunk or lay up over top of the length of Syracuse. thank god we only play them twice and I don't think other teams have the athleticism and length combined like the Cuse do but other ACC teams will try and duplicate this D on us.