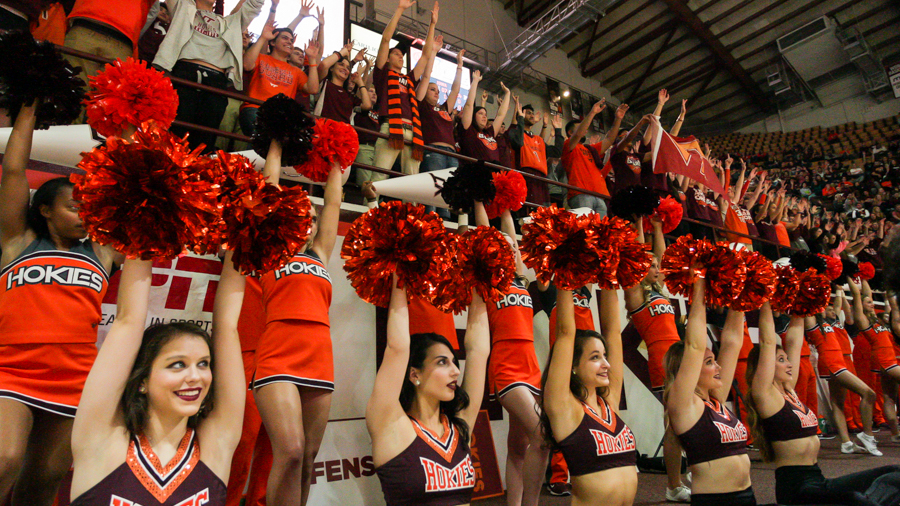 In the first part of this game, the Hokies were on fire from deep. Ahmed Hill and Justin Bibbs both scored 13 points in the first half to help Tech open up a 15-point lead going into the locker room. Given how cold Tech had been in prior games — Bibbs alone began ACC play 2 for 17 from long range — the performance was very encouraging.
In the second half, Wake Forest made a run. The Hokies' defense allowed several open three-pointers, which in turn gave the Deacons an opportunity to close the gap. It was yet another example of how Tech's defense is a major liability for the squad this season. In a game that could've — nay, should've been — a blowout, it instead was yet another matchup that came down to free throws and key possessions.

Justin Robinson delivered in clutch moments. He hit tough layups and sunk important free throws as the clock got closer to triple-zeros. Robinson finished the game with only 13 points, but consider this: Virginia Tech as a team scored 13 points in the final two minutes of the game, and Robinson had 11 of them.

"Last year it was Seth [Allen], this year I'm trying to take a little bit of the responsibility," said Robinson of having the ball in his hands late in the game.

The Tech faithful wondered who might get the ball in late-game situations since the departure of Allen. It seems like Buzz Williams may have found his guy.

I walked out of Lawrence Joel Veterans Memorial Coliseum (Wake, this is too long of a name), feeling surprisingly satisfied with Buzzketball's performance. It wasn't a great second-half showing, but it was a road win. And it stemmed from a team effort good enough to make the home crowd boo their own team at points.

And wow, a Louisville player that averages 29% from deep this season just made another three.

Let's face it. There aren't many occasions when teams should feel semi-confident about traveling to the KFC Yum! Center to face Louisville. The Cardinals are perennially a good team, regardless of who's coaching. And on their home court, it becomes close to impossible to beat them. The last time an ACC team not named Virginia beat Louisville in the state of Kentucky was Notre Dame. On March 4, 2015.

This season though, it felt different. It felt like the Hokies had a legitimate chance of winning. Not a chance of winning because Tech guards were unconscious from deep (looking at you, Seth Allen), but because the Hokies, as a team were good enough.

I'll say this, pretending it's a hot take. Turn the ball over only 15 times and Buzzketball goes home with a victory. Simple as that. Turnover rate has plagued the Hokies since the Kentucky game. Williams knows it. The players know it. The fans know it. And until it somehow gets fixed, it will continue to be the main reason the Hokies lose ACC games.

On the defensive side of the ball, the Hokies allowed Louisville to make a season-high 13 shots from deep, including a 4 for 6 performance from Deng Adel. The Hokies don't play great defense. Sometimes they play good defense. But most of the time, they play meh defense. They go under screens set for shooters. They don't close out hard with their hands up.

Brian said it best in his column after the loss.

The Good: Florida State has struggled on the road this season, including their most recent loss ‒ at Boston College (75-81).

The Bad: The Seminoles are still absurdly tall.

Florida State has on their roster, by my count, eight players above 6'8". Virginia Tech has two, with only one having played during ACC games. Great.

The Hokies will need to do two things in this game to win. Shoot the ball well, and limit turnovers. These are also the two things Tech has struggled with the most during conference play.

There was a flash of brilliance in Winston-Salem from the Hokies' shooters. Their stroke dissipated in the second half, but it was there to start the game. Hopefully being back in Cassell will help Tech's guards find their rhythm and knock down plenty of shots.

The turnovers, on the other hand, will continue to be an issue unless Williams and his staff make a major fix. The Seminoles are yet another long, athletic, tall team. Louisville is similar, and that turned into a 19-turnover game for the Hokies.

Luckily, Buzzketball has a whole week to get all the kinks ironed out. Combine that with a sold-out Cassell, and hopefully the Hokies will have plenty of energy from the opening tip. Tech isn't in "must-win" territory yet, but they're creeping closer and closer. Especially considering who their next opponent is, only two days later.

The Good: UNC hasn't looked all that great this year (hello Wofford).

The Bad: The Tar Heels are still the defending national champions, and return eight players from that team. And with such a quick turnaround from the FSU game, there won't be much dedicated prep time.

Luke Maye has emerged as a star for the Tar Heels, averaging a double-double with 18 points and 10 rebounds per game. Joel Berry has recovered from his 2K rage-induced broken hand to average 17 points per game and a assist-to-turnover ratio of just around 2. Roy Williams was also able to recruit Pittsburgh graduate transfer Cameron Johnson to Chapel Hill over the offseason. Johnson is averaging 25 minutes a game, and chipping in almost 10 points per contest. He's also the second-best rebounder on the team.

Akin to the Hokies, North Carolina loves to run. It'll be interesting to see if the Tar Heels stick to their pace, or if they slow it down. It's been pretty well documented the Hokies don't play well when the pace is slower.
Should UNC decide to push the tempo, keep an eye out for their secondary break. It's what Roy Williams is known for.

The point guard brings the ball up the floor with the two wings filling the sides. One big man will rim run, and the other big will trail the play, setting up shop at the top of the key.

At this point, the point guard has many options. The first look will be towards the rim run, because usually the opposing center (Kerry Blackshear Jr. for the Hokies) will have trouble getting down the floor into position that quickly. If that pass isn't open, the point guard will look for the guard in the near corner.

Now that a shooting guard has the ball, his first look will be to the low block, where the rim run has settled. If that's not open, the ball will swing around the perimeter, always looking towards the post player in case he finds position.

If the ball swings all the way around and settles on the other side with the final guard, the opposite side guard will set a back-screen for the big man at the top of the key. The guard with the ball will look for either a lob or an entry pass to the post man who has also rotated over and vacated space for the alley-oop.

If the lob is defended well, the two post players will cross-screen for each other, and the ball will be reversed back to the point guard, who is now at the top of the key. UNC will reset and run a different play.

The odds are that something will come open off of this secondary break, whether it be a easy layup from the rim run, an open three from the ball reversal, or an emphatic slam on the alley-oop. With the Hokies being as small as they are, I wouldn't find it surprising to see the post players for the Tar Heels getting lots of open looks off of this play.

If the Hokies can pull out one win during this two-game stretch, it's a success. On the chance Tech goes 2-0, that would provide a huge cushion for Tech as they move forward through ACC play. However, 0-2 puts Buzzketball firmly behind the 8-ball.

The Bad: The Seminoles are still absurdly tall

My hope is they are tall and slow and we will run around them left and right.

Or that we can make long legs tired legs and run them out of the gym like we did with Wake in the first half.

The turnovers, on the other hand, will continue to be an issue unless Williams and his staff make a major fix.

The problem is, you really can't pull off a "major fix" in the middle of conference play. During the season you can sharpen your knife, but you have to buy your knife during the off/pre-season.

Yeah, I would disagree with the author on this one. The turnovers will stop being an issue when our team full of ballhandlers stop pushing the ball into stupid spots. There is no major fix to be made, we just need to play smarter.

Using your metaphor, the particular knife we bought is naturally a bunch of guards. We should be really good at protecting the ball. But starting with the UK game, we lost some of our momentum in that respect. Turnovers, no rebounds or shooting %, is the key stat to watch for this team. If we can protect the ball and get shots, we will score and we will be tough to deal with.

The biggest problem is Chris Clarke. He's getting more and more time with the ball in his Point-Forward position. But his TO rate is astronomical. Clarke either needs to play better in distributing or we need to play more through JRob and Wilson.

Although he's been better, J Rob has also been yucking it up in this respect. I think he had 3-4 in the first 10 min of the UL game

and as little as they play

That is the turnovers per game. Not sure I have seen many teams where every starter averages more than a turnover per game.

At least we get to see MJ Walker's long awaited Cassell debut.

Is there a ticket exchange on here for hoops? I cant find it if so. looking for dukie tickets. willing to pay 400-500 for 2. or exchange any football tickets lower level player section home or road except FSU.

If you are willing to trade 2 ND football tickets for 2 Duke basketball tickets I would be interested.
ninatrott(at comcast.net)
Basketball seats are Section 11 Row G seats 10 and 12- they are mid court on the press side about 6 rows up

As you said, Tech must go 1-1 during this stretch, ideally 2-0 because the schedule really never lets up from here.