An end-of-regular-season look at the Hokies home win over Miami. 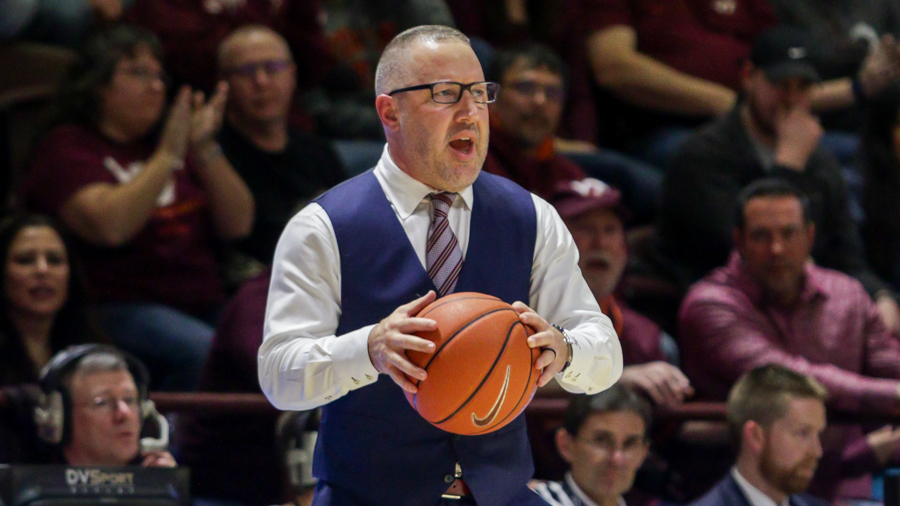 The Hokies capped off their 2018-2019 season at home with a resounding 84-70 victory over Miami. I was finally able to get back into Cassell to make some photos in front of a surprisingly raucous and sold out Cassell that had a Blacksburg Smarch winter snowstorm arrive right before tipoff.

Justin Robinson, although still injured, walked out onto the court in his game jersey and it was easy to see how much the day meant to him. Here we can see him literally leaning on Buzz as he gets honored at mid-court.

The seniors and their coach posed for a photo and I found myself out of position to get a clean standalone shot of them. However, I feel like I was still able to make a compelling photo by taking a step back, not trying to elbow my way into the line, and instead show you a little bit of a wider view of the scene. My thinking, looking back on this photo now, is I wish I went even wider and pulled not only the photographer scrum in, but the crowd behind them. Maybe next year.

I know I've made similar points in other games where everything went the Hokies' way, but you can tell when Buzz and Company hits on a play or formation or something that the other team just couldn't stop. Here's an example in the first half of Wabissa Bede and Nickeil Alexander-Walker in almost the exact same position on the court, facing the exact same way, in two completely separate plays.

On this particular example, one of those plays lead directly to a Kerry Blackshear Jr. slam dunk:

Also from Blackshear, this particular telling facial expression after he got called for a hard foul on Miami's Chris Lykes. My vantage point sometimes catches these little moments that don't always translate to TV, but are clear as day on the baseline (and to referees).

Back to things that just kept working for Virginia Tech: the three-point shot. Here's a wide view of one of Ty Outlaw's many three-point attempts that also shows you just how packed Cassell was.

The Hokies were so good at finding the open shooter that they ended up taking shots with the closest Miami player a dozen feet away or more.

Even on the bench, Justin Robinson could not be stopped on the three point play:

The student section also couldn't be stopped from three, with this lucky dude winning $10,000 from half court the day before spring break.

You might not win $10,000, but you can check out the rest of the photo gallery, and every photo gallery ever made for TKP at photos.thekeyplay.com. Enjoy!