Hokies Fall Short at the Buzzer

Virginia Tech stormed back against Syracuse, but a Landers Nolley jumper missed wide as the Hokies lose 71-69. 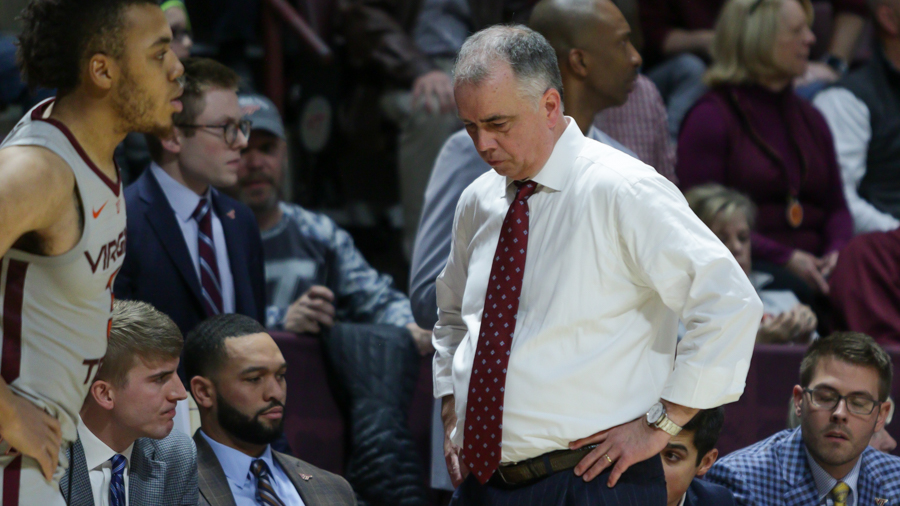 A lot of people will start with the goaltend. Or, rather, the shot that should have been called a goaltend.

Trying to fight their way back from a 13-point hole, the Virginia Tech men's basketball team began chipping away at Syracuse's secure lead. Down nine with 13 minutes to go, the Hokies penetrated the Orange's famed zone, dumped it down to P.J. Horne who lofted a silky floater towards the rim.

It was one of those shots where the player was just as concerned with not getting blocked as they were with hitting it. Horne sent the ball skying through the air at a trajectory not even the best shot blockers could legally get a finger on. And when Bourama Sidibe–a 6'10" Malian pogo stick–raced in from the weak side to swat it, everyone knew it was a goaltend. The decent sized crowd at Cassell Coliseum, the broadcasters, every would-be journalist writing a gamer from their couch, everyone knew Horne would get an easy two points.

Everyone, it seemed, except the officials.

There was no call, and though Syracuse went on to miss their next shot in what felt like a "ball don't lie" act of karma, the stolen two points lingered. You couldn't help but think of them every time the Hokies cut into the deficit. They crept into the back of your mind when Wabissa Bede missed a free throw to tie it with 40 seconds left. And they punched you in the gut when Landers Nolley bricked a potential game winner at the horn.

Those two points would have come in handy down the stretch, don't you think?

But one missed call won't define Tech's 71-69 loss to the Orange, as Jim Boeheim's team avenged their loss to the Hokies in the Carrier Dome just 10 days prior. There are too many layers to this game to obsess over one bad moment from the officials.

Mike Young's group showed exactly what makes them both endearing and (at times) infuriating, dragging Tech fans along an emotional roller coaster of highs and lows. After a quick start, the young Hokies looked sluggish on both sides of the ball. Offensively, their attack against the zone quickly grew stagnant. A Jalen Cone jumper tied things at 19 with 10 minutes left in the first half, and Tech didn't hit another field goal until Cone nailed a three at the four-minute mark. You don't have to be Ken Pomeroy to know zero baskets in six minutes isn't exactly efficient.

They compounded their offensive woes with defensive lapses. Buddy Boeheim scored 18 of his game-high 26 points in the first half, using a series of straight line drives to heat up before catching fire from behind the arc. At one point he chirped at the bench to tell his coaches Tech couldn't guard him, and though it felt like the embodiment of nepotistic smugness, he wasn't wrong.

The Hokies hit just 30 percent of their shots as the younger Boeheim had his day, and fell behind by as much as 16. And though a triple from Nahiem Alleyne cut the Cuse lead to eight at the half, the game felt out of reach.

But then the shots started falling.

Young's squad kept things within reach while continuing to bomb away with abandon. In a white-hot four minute stretch, Bede, Alleyne, and Nolley hit a series of jumpers to melt a 12-point Orange lead to two. The Hokies refused to go away, and scratched and clawed a path back into it. And though Syracuse hit 50% of their shots post-intermission, the two sides traded buckets down the stretch. Boeheim, Elijah Hughes, and Marek Dolezaj would keep their team afloat, but then watch as Tech would break down the zone and find an open man.

With Bede and Isaiah Wilkins operating from the free throw line, Tech made one final push after the last TV timeout. Wilkins hit a jumper from mid-range, then found Horne and Alleyne in a quick 90-second flurry. And after trailing for the last 30 minutes of regulation, the Hokies had the ball and a chance to put an exclamation point on their second half effort.

The final shot put an unceremonious end to a rough outing for Tech's star player. Nolley shot just 5-16, including 3-13 from three. He frequently settled for contested triples from the top of the key, got the worst of his defensive matchup with Boeheim, and was pressed into a few brutal turnovers during the comeback. But despite the clunker, his team had nothing but support to give him.

"That wasn't what we drew up," Mike Young said about the final play. "But (Nolley) was going to be a part of it. We made the wrong play. That is on Mike Young, not on my team. We'll handle that better and the next time, or 10 times, he will be a part of that action that didn't work out for us. Again, I take all the responsibility for that."

"We just put the ball in Landers' hands, tell him to make the right play, the right decision," said Cone. "I'm not mad at him for the shot he took. He makes those shots, not only in practice but in games. We have full trust in him."

But Nolley's performance highlighted a few important performances for the Hokies moving forward. Despite never being able to get it going, his teammates stepped up to carry some of the scoring weight. Cone's success from deep sparked an early run, and then garnered enough attention on the perimeter to give Bede, Wilkins, and Tyrece Radford room to operate in the middle.

And when they needed a catalyst for their second half run, Alleyne had the best game of his young career. He scored 14 of his 17 points in the final 20 minutes, bailing his squad out on a few possessions. He also assisted on a pair of crucial three pointers, distancing himself from the freshman wall he hit earlier in the year. And Bede, despite not having a sexy statline (nine points, five rebounds, three assists), was instrumental to the Hokies' offensive success.

Yet the difference between a win and a loss comes down to a series of moments. It's not just a missed goaltend or a poorly executed play, it's a series of small mistakes that eventually add up to the final result.

"It's going to be hard to win when you allow an opponent to shoot 48% from the field on you," Young said afterwards. "We had as many scouting report mistakes as we have had all year and that is not me being critical of my men. It's just the game.

"We're flying out at Guerrier, who is a really good player, but he's not going to make a shot from 3, and we're flying at him like he's Ray Allen. He gets to the rim and we foul him. We lose Boeheim and get help off of Boeheim. We didn't do that in game one and it worked out pretty well for us. The only explanation is it is the game. Mistakes were made and Syracuse played a little bit better than the Hokies and won."

The loss dropped Young's Hokies to 13-5 and 4-3 ACC, with an important stretch coming over the next 10 days. Tech plays UNC, at Boston College, and at Miami, three opponents with a combined six conference wins. With the league down, the door to the postseason has been left wide open for a team who can take care of business against mediocre competition.

If Young and company can stack wins against the trio of reeling teams, they could be well on their way to NCAA Tournament contention–something which seemed unfathomable just a month ago. But the margin for error is razor thin, and what could be the most surprising season in the history of Virginia Tech basketball may just come down to a few goaltending calls.

Really inconsistent game for us, indicative of how much youth we have on the court. Then again, I was expecting us to get blown out every ACC game so I'm OK with losing games like this.

Freshman are going to make freshman mistakes. This was a youth catches up with you loss. But those guys are fighters that's for damn sure. 34 ft 3 pointer was not the shot we were looking for. But also a couple of more made free and throws maybe this one ends up different as well. MYB is definitely not boring. Go Hokies!!

Great article. Watching the game you could feel that shooting 50% from the free throw line and missed goaltend we're going to have an impact. On the bright side, coming back from 16 down was impressive for this team.
I would have liked us to not call timeout before the final possession. It's really hard to get a good shot off against Syracuse in 9 seconds because of their zone defense. I would rather we pushed the ball up the court off the rebound and tried to get something before they were set.

That's a good take, and I agree we should have pushed on and hoped for the best instead of taking that time out. Either way, Nolley wasn't firing at his best and perhaps another option would have been a better one, like Cone, or even Alleyne. I suspect that's what the coach wanted, too, but the milk has been spilled.

I agree, but they stopped the action to review how much time should be on the clock so their defense was set already. I also think having such a young team and a first year coach influenced the decision to call a timeout. Less time in practice is likely don't on those situational plays.

You're totally right. I was at the game and completely forgot about this.

CMY is known as a coach who draws up very effective plays in these situations. It just didn't work out this time.

It just felt like their day. So many shots rolled in or got favorable bounces on their end, so many rolled out for us. It happens. Kudos to the team for gritting their teeth and having a chance to win it in the end. Outside of that very last possession which....yikes.... I have 0 to be mad about. I think we were the better team and I did not imagine I'd say that period this year

I am not sure what exactly is going on with his shot, but Nolley has been absolutely horrible from the top of the key the last three games. I hope he gets his stroke worked out.

Yeah, it sucked to lose, but we climbed back into the game and made Syracuse earn the win.

We need to get a little more consistent with the free throws, some games we are good, and that game we were horrible, 50% and missing the first of a 1&1 really hurts.

Anyone else notice how it's impossible for Nolley to catch a pass without immediately putting up a pump fake? He's become so predictable with it that not only does it not fake defenders, it also throws off his own rhythm and makes for bad shots.

Ball fake to try and get the top of the zone to shift and open a passing lane to the top of the post inside the zone- generally good things happen when the ball gets there vs SU.

Missing the front end of 1 and 1 free throws down the stretch, will always come back and bite you in the butt. You have to make your free throws to win.

Fuente Sees a Need for 'Drastic Improvement' on Depth as the Hokies Move Through Spring Practice
Alex Koma, 04/08/21
22 hours (81)