The unheralded blue-collar guard has stepped into a bigger role for Virginia Tech. 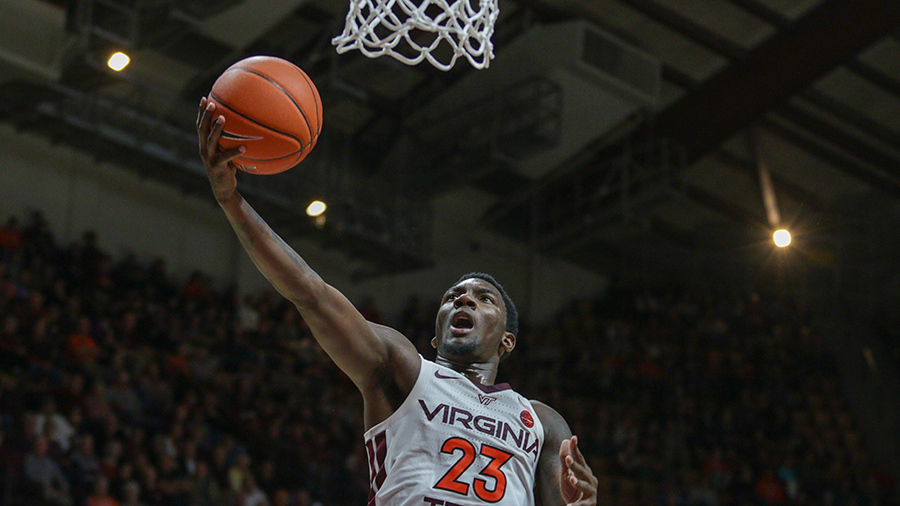 Tyrece Radford flashed a sly grin and shook his head before he dove into the question.

The 6-foot-1, 205-pound guard out of Baton Rouge, La. said he doesn't feel like Virginia Tech has earned enough respect yet. He understands why, he said. That's because of the youthfulness of the Hokies' roster, but it's something he wants to change.

"A lot of people underestimate us," said Radford. "We do a lot better than people would think we're going to do this season. We still got a heart and we still bleed like every other person. We just have to keep going at the opposing team until the final buzzer."

That never-back-down mentality from Radford has helped him emerge as the face of a Tech team that has overachieved for most of the season. Even with the Hokies now in the midst of a three-game losing streak, Radford's play has continuously improved.

Coming out of McKinley High School, the off-guard wasn't a highly-touted prospect. He struggled in the classroom at times, forcing colleges that originally showed interest to pull their scholarship offers. In June of his senior year, however, Buzz Williams called.

The result was his first scholarship offer. But because of his grades, Radford was forced to redshirt last season. When Mike Young was hired to replace Williams after he bolted for Texas A&M, the Louisiana native said he felt like he had to prove himself once again.

What stood out the most about Radford at the time, Young said, was his unique ability to rebound the ball well for a guy his size. Add the capability of getting to the charity stripe consistently and serving as a tenacious defender and Young was quickly impressed.

"I always have tried to play with a chip on my shoulder." said Radford, who leads Tech this season with 6.5 rebounds per game. "Even if I'm not scoring the ball as well, I'm going to get a rebound. I'm going to do something to try to contribute to my team."

Radford noted that the blue-collar attitude he brings to the court comes from his upbringing. Radford's best friend Kejohn Davis Carroll — a 16-year-old at the time — was killed on Dec. 4, 2015 when his younger friend was playing with a gun and it discharged. Davis-Carroll was in 10th grade at the time. Radford was in ninth.

He also lost a pair of uncles in June Radford and Dre Williams, both of which he considered himself very close to and spent a lot of time with over the years, he said. All of the pain and anger he's felt from the losses now translate to a grittiness on the court.

"If you love the game how you say you do, you're going to do everything in your power to try to win it," Radford said. "I just feel like, with where I come from, that has a lot to do with it. The losses I've taken in my life have taken a toll on me. But they've also taught me to just work. Any part of the game that I can try to ace, I am willing to try it."

Coincidentally enough, it's been Radford's production on the offensive end that has been his biggest contribution as of late. He was especially efficient in Saturday's loss to Florida State as he finished with 18 points on 8-of-10 shooting and six rebounds. It was the second-straight game that Radford (9.5 ppg) has led the Hokies in scoring. He finished with a career-high 24 points a few nights earlier in a road loss to Miami.

"I don't know that it's anything different for him," Young said about Radford after the loss to Florida State. "He's obviously playing with a supreme level of confidence. He's just doing it every night now. After the N.C. State game, I said that he's coming to a point where it's really hard to take him off the floor and it is. He's just such a stat stuffer with his energy plays and his rebounding. He's great at just getting to the basket. Everything is just driving it and hard. He gets fouled and he's a really good foul shooter."

It hasn't just been the simple fact that Radford is scoring for Tech that has been key. It's that he's doing it with an incredible level of efficiency (84-of-126 from the field this year). That has forced Young to start to ponder new ways to get him involved more offensively.

"You run special plays for special players and he's quickly becoming a special player," Young said. "Tyrece's ability to finish around the basket creatively, his ability to knife through the lane and avoid that contact — you don't teach that. I find myself thinking in private about how we can get the ball to him where he can just drive someone."

Radford pointed to the year away from the game as a big reason for his steady improvement throughout the course of this season. He said there were times where he thought about giving up last year as he tried to get his academics back on track and then watched the coach that brought him to Blacksburg leave the program.

But as he continued to grind through workouts and practice sessions and started putting in work with Young and the Tech coaching staff over the summer, he said his belief grew and he started to picture the type of success that he's now experiencing consistently.

"I think my confidence grew a lot," said Radford, who had started 19 of 22 games this season for the Hokies. "With me not playing for a year and a half, it was tough. I knew it was going to be kind of tough getting back into my groove. But I knew once I got back into my groove, I was going to go on the type of run I'm going on now. I just have to keep it up. I give a lot of credit to my team. They keep the energy pumping into me. Coach keeps pumping the energy into me. We all need that energy. It's been big."

Tech is the youngest team in the ACC this season with Radford, Landers Nolley, Hunter Cattoor, Naheim Alleyne, Jalen Cone and John Ojiako all serving as first-year players. The Hokies are also amongst the shortest teams of high-major programs in the country.

But another benefit of redshirting last year, Radford said, was learning behind players such as Justin Robinson, Ahmed Hill, Kerry Blackshear and others. He said that allowed him to mature quicker on the court and grow into a bit of a leadership role this season.

"We had a lot of leaders last year," Radford said. "I would always watch them and I kind of took some of it and learned from all of them. I'm still learning from Wabissa Bede. I'm always learning. But from here on out, it's all about moving forward and not looking back. I'm just going to keep learning and doing the best that I can do for my team."

The recent string of success for Radford isn't an isolated occurrence, Young said. In fact, the first-year Virginia Tech head coach said he expects it to become the norm.

"I don't know that anything has changed," Young said. "I'm glad he's in a Hokie uniform and I have the opportunity to coach him. He's a special man. He's making himself into a very valuable player."

The value Radford has brought to Tech this season is one that Young can't talk about enough. Whether it's diving for loose balls, grabbing rebounds over opponents five or six inches taller than him or now suddenly becoming a potent threat on the offensive end with his ability to get to the rim, Radford has been elite this year.

As Tech now finds itself facing a bit of adversity — the Hokies have lost three in a row and four of five — Radford said they know this is another opportunity to gain respect.

"Even though we're young — one of the youngest teams in the league — we just have to keep fighting," Radford said. "We just have to keep having faith in each other every single day we're here. If we do that, everything will be OK at the end of the day."

If they're able to do that, the respect and wins stand to follow soon.

"I just play with that chip on my shoulder always and if you do that, everything will work out for you," Radford said. "That has always been my mindset."

Tyrece Radford turns 21 in April, which makes sense given his name anagrams to Carded Re: Forty

Well written, Cody! It's easy to pull for Radford, seems like the type that would be carrying the lunch pail on the football team.

Tough, gritty, and efficient is a good way to get some playing time as an undersized player. This team really has some good building blocks and Radford has been a pleasant surprise while he has been carving out a role for himself for the next 4 years. Ever team needs these kind of energy guys and its even better when they contribute meaningful stats. I don't think his 18 point performances will be the norm, but I would love to be wrong.