Lessons To Be Learned From Hokies' Loss To Duke 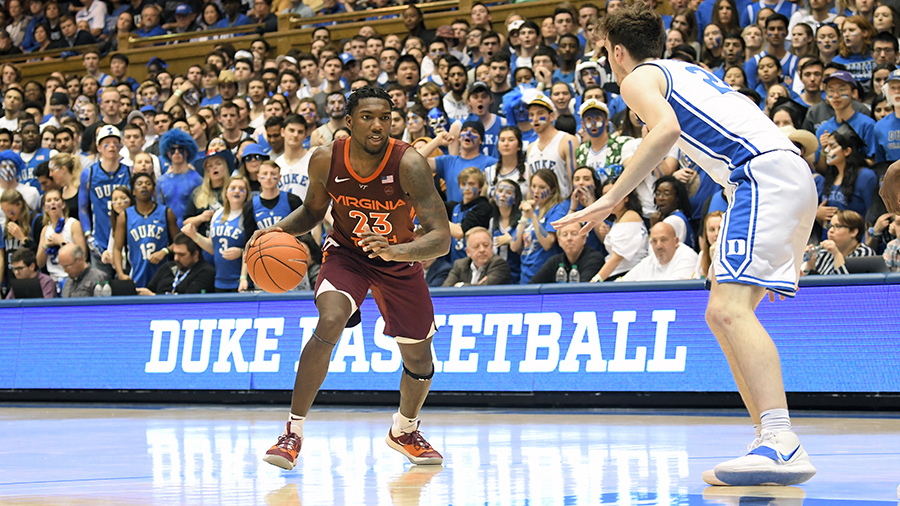 Virginia Tech witnessed firsthand what an elite ACC team looks like on Saturday.

And for the Hokies, who now feature six freshmen playing significant minutes in their rotation, the lessons gained from the trip to Durham will be the biggest key to identifying how first-year coach Mike Young elevates his own program to that level someday.

What they learned in an 88-64 rout at the hands of Duke is they've got a ways to go.

"I just told my team the same thing I'll tell you," Young said about the Blue Devils. "They were, obviously, very ready to go. My team was ready to go. They played an awfully fine basketball game, and that's about all that needs to be said, I think. They blitzed us early and often. They were better, obviously. They were that good and I didn't think we were awful in spurts. They were just flat out better than my team on this particular evening."

A little over two months removed from leading Duke at half in Blacksburg before letting the Blue Devils eventually rally for a road win, it was nearly over from the start inside of Cameron.

Tre Jones hit back-to-back 3s to start the contest and Cassius Stanley later hit another and before the Hokies could blink, they suddenly trailed 11-2. The Blue Devils made it a double-digit lead on a bucket from Matt Hurt with 13:30 remaining in the first half and by the time the two teams went to the locker room for half, Tech found itself in a crushing 26-point hole.

"We started off hot, we had a good game plan going into it," said Hokies forward Isaiah Wilkins, who finished with 11 points and a season-high six boards. "When a team that good starts like that, it's hard to beat. If we were able to start like that, we would be tough to beat as well."

There wasn't much for Duke not to like about its performance after a disappointing 22-point loss to N.C. State earlier in the week. Four Blue Devils had big nights with Stanley (21), Vernon Carey (16), Hurt (16) and Jones (14) all reaching double figures in the scoring column.

"We have no choice but to guard them the way we guarded them, and some of you may be scratching your heads, thinking that I made a mistake," Young said about defending Carey. "I don't know who in the world can play [Vernon] Carey one-on-one, and I'm trying to do it with the best guy of all-time, but he's not very big, so we've got to constrict the floor. It's what we did in Blacksburg, and it worked out very well for us. Now, he's seen a lot of different defensive looks and a lot of different traps from different angles, and I thought he did a marvelous job of getting over his right shoulder with his left hand. He's a masterful passer; that part of his game has really come on. [They're] a good shooting team. I don't think they're a great shooting team, but, because of how we have to defend, they make eight first-half threes."

The Blue Devils finished 11-of-26 from 3-point range. They also outrebounded Tech 49-31 and finished with nine blocks. Duke led from start to finish and its biggest lead was 30 with 11:56 remaining in the second. Though the Hokies did outscore the Blue Devils 39-37 in the second half.

"We came in going into the game knowing that their shot was going to fall," Tech guard Tyrece Radford said. "We knew that and just had to fight basically. I felt like we did what we could. It wasn't our best game, but it happened." [Them knocking down threes] was not a part of the game plan. We stuck with the plan and did what we were supposed to do. I did feel like we could have had more energy while we were playing. But I do feel like the next game will be better."

In the first meeting between the two teams, P.J. Horne had 15 points and hit a trio of 3s. In the second contest, Horne finished scoreless in just 18 minutes of action. Freshman big man John Ojiako continued to see increased playing time (20 minutes) and responded well with six points, four rebounds and a block.

"We had better possessions," Young said of the difference in the first outing and this one. "I thought we possessed the ball well, got the ball moved from side to side. We were able to get Vernon on some ball-screen things. And P.J. Horne made three threes in that game. A lot of big post players have a difficult time with a stretch forward and we weren't getting those same opportunities today. They were quicker and just knocked us out of everything we wanted to do."

Tech turned it over eight times against Duke, but struggled to get good looks once it got into the half court. The Hokies shot 37 percent from the field and went 8-of-24 from 3-point range.

"Just their length," Young said of what makes the Blue Devils tough defensively. "They're just so aggressive. And the ball pressure, which we'll get to at some point here, the ball pressure speeds you up and speeds you into some uncomfortable situations. I thought that when they hit us in the mouth, you cannot handle the ball poorly and turn it over. The one-pass possessions, a bit of fool's gold. It might look like a pretty good shot, but you've got to get it down. If you don't get it down then here they come at you again, and that's where the trouble begins."

There were some bright spots, particularly in the second half. Radford continued his evolution into a strong offensive player with 16 points and also had nine rebounds. Hunter Cattoor also notched his eighth double-digit performance with 10 points in the loss. After a frustrating, and exhausting, three-overtime loss to Miami on Wednesday, the Hokies weren't ready to use that as an excuse for their lackadaisical start in front of the Cameron Crazies.

"I don't think so," Young said. "I didn't think about that at all. Let's give all the credit to the Blue Devils. They were that good and I don't think our game against Miami had any emotional effects on my team or how we performed physically. I thought we performed, physically, quite well."

Tech redshirt freshman phenom Landers Nolley, meanwhile, continued through his midseason slump. He finished 1-of-8 with just three points in a season-low 16 minutes played. He's now 8-of-44 over his last three games and had a plus/minus of -16 against the Blue Devils.

"Just stay in the gym with him," Young said of how to support Nolley. "Basketball players go through little cycles like this. It's really important to him. Nobody wants to come out of it as much as he does. We need him to, but we'll hang in there with him. He'll come out of it."

After witnessing what a top-level team in one of the best conferences in the country looked like, the Hokies will continue to experience the upper echelon of the league in the upcoming weeks.

Tech welcomes rival Virginia to Cassell on Wednesday and then travels to Louisville on March 1 for a 6 p.m. tip-off. There's undoubtedly many lessons to be learned during the three-game stint.

What Tech does with them will help determine whether it can reach that same level at some point under Young.

"I mean, they're a really good team but of course it's going to be discouraging," Wilkins said. "For a team like us, we know we can beat a top-tier team. So, we game planned and worked hard to get in this position. So, of course it's a little bit discouraging."

Winning the second half felt good, and it seemed smart to give guys like Ojiako, Wilkins, and Cone get plenty of minutes. We're building a foundation for the future and I liked the "glass if half full" tone in the post-game quotes. We played a final four caliber team basically even for 20mins, so the proof of concept is there.

Here's to hoping we can put together a solid 40mins and get a confidence building win against Louisville or that team from Charlottesville who plays in an arena named for a hedge fund manager.

Alas, I suspect we are going to be embarrassed in the remaining games. The part that bothers me is getting schooled in our own house.

That one was rough, I didn't have high hopes, but did not expect to get the doors blown off. Duke recognized early that we were going to play defense tight to the basket to make up for our lack of height and they made us pay quickly. Before we could get our legs and adjust, the game was out of hand.

Duke's number just came up at a really bad time. Nationally televised Saturday night game in Cameron after the Devils completely zombie walked through their last game against the Pack. K was PISSED after that NCSU game. That was probably a couple of rough days on the practice court.

Coach K probably still made the team run laps Sunday morning because they didn't win by 30.

Biggest positives this season has been the development of Radford and Big John. Radford is getting better and better (even as we play against better opponents). He plays like a 6'6" Forward and not a little 6'1" guy.

Big John gets better every game deserving his additional minutes every game.

Imagine Radford and Chris Clarke on the same team

I will say this till the day is long. Put Blackshear in the mix and we are a 4 loss ACC team, placing us 4th outright and ahead of UVA to boot. We are on player away from this. Give us a Robinson type PG and we beat BYU and possibly Duke the first game. I've had my ups and downs with this team this season, but they are better than what their record indicates. There are times when I don't give them enough credit.

Totally, that Florida transfer is looking more like a lateral move than a shot to win a championship. I think if you put KBJ on our team, VT and UF would flip records. At least he is close to family and not worrying about getting to practice in the snow.

getting to practice in the snow

What snow? NRV has had 4 snowfalls this winter, 3 of them dustings, and one that was 2-3 inches. Much milder winter this year "so far".

When did we get 2-3 inches? I can't recall any snow that actually accumulated in Christiansburg.

January 7th. I have pics of my dog in it.

Yeah, that was the day I drove back from New England. It must have all melted by 9pm when I got home. If it is gone the same day, I still don't count it.

It did melt fast. Fell overnight and that day got pretty warm. Roads were clear.

I agree with this, but we also don't have an ACC caliber PG... That has also been a significant issue this season.

I guess "bacon girl" was not in attendance!