The Matrix 5.0: Stock Report I

Evaluating the early returns of Virginia Tech's basketball season. Through four games, who's up, down and holding. 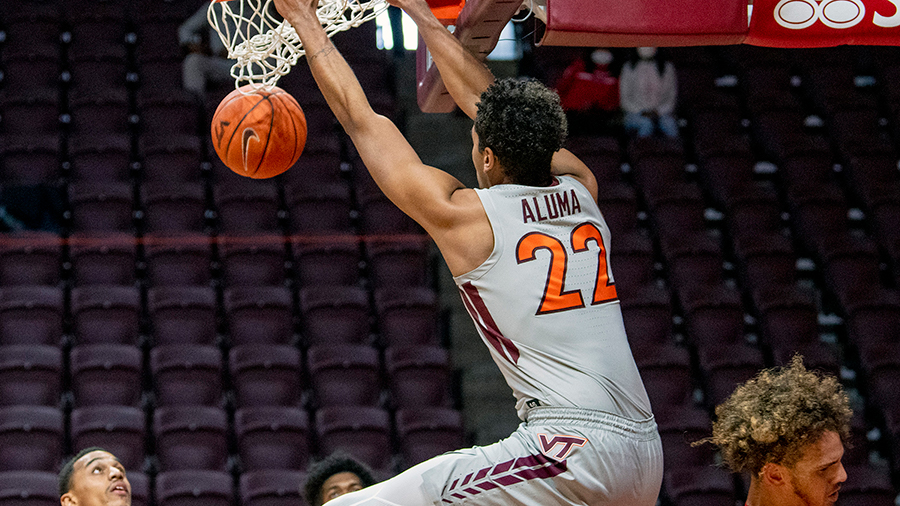 Publisher's Note: While the stats are up to date, this was written before Virginia Tech-Penn State.

After spending the 2019-20 season trying to get a feel for Mike Young and his folksy brand of coaching, The Matrix is back! This season, we will be giving the original Matrix format a Buzz cut — GET IT?! — and re-packaging it with fresh headshots and a popcorn bucket or two. In addition to the aesthetic updates, we'll be providing a weekly stock report in between the usual collection of in-season updates to the rankings, themselves.

For those of you new to The Matrix, or simply in need of a refresher, check out the original article that introduces the methodology and try not to get distracted by the matador's moose knuckle.

This season provides a similar opportunity as the inaugural edition of The Matrix: one filled with fresh faces trying to establish their roles within a new(ish) coach's system. Honestly, it was fun to look back at that first iteration of The Matrix, born out of my genuine desire to make sense of that new look Hokies hoops team that was formed in the wake of James Johnson's departure and the dawn of the Buzz Williams era. While many of the rankings look silly in hindsight, they made sense at the time. Many of the players that went on to be critical pieces — either in Blacksburg (Ahmed Hill, Justin Bibbs) or elsewhere (Jalen Hudson) — and others eventually came down to earth once surrounded by better players (Devin Wilson).

Looking back at James Johnson' tenure, the roster was devoid of impact players. While Johnson hoped to become a fast-paced team capable of running opponents out of the gym, the Hokies lacked the personnel to succeed in a conference like the ACC. With the departures of guys like Jarrell Eddie, CJ Barksdale, Ben Emelogu and Trevor Thompson, Year One under Buzz initially looked frighteningly dependent on the pick-and-roll prowess of Wilson and Joey Van Zegeren, as well as the emergence of promising youngsters Malik Mueller, Bibbs, Hudson and Hill. Remember, Bibbs played his high school ball alongside top recruit (and future first round pick) DeAngelo Russell, Hudson went to St. Vincent/St. Mary (of LeBron James fame), and Hill was the #62 recruit in the nation who flipped from Marquette following the hiring of Williams. While the fan base expected them to contribute, in truth, Buzz needed them to contribute. Fast.

Enter the hellscape that is 2020 and Mike Young's second season in Blacksburg is filled with both a tenuous schedule and some admittedly welcome turnover. Once promising youngsters like Landers Nolley II and Isaiah Wilkins have been replaced by veteran transfers Cartier Diarra, Keve Aluma, Justyn Mutts and Cordell Pemsl. In all, 7 players from last season's roster are no longer members of the team, including their leading scorer from a year ago (Nolley). On paper, the loss of Nolley hurts. But anyone who watched the Hokies play down the stretch last season saw how much more fluid the offense ran with Nolley off the floor. While he was the most natural scorer on the team, he also became more and more of a ball stopping wing as the season progressed. Compare that with holdover Nahiem Alleyne, who really grew into his role as a dangerous perimeter threat and was also able to work within the flow of the offense and distribute just as much as he could shoot it.

This past offseason saw an influx of complimentary pieces capable of filling various roles the team was previously deficient in. Aluma, Pemsyl and freshman David N'Guessan (to some extent) add much needed frontcourt depth over previous "center" P.J. Horne and backup John Ojiako. Diarra provides a third experienced and capable ball handler and defender to spell Wabissa Bede and ideally move Jalen Cone off the ball where he can thrive. Mutts has the size and ability to impact the game on both ends of the floor, including on the glass — an attribute the Hokies sorely missed last year, as they were forced to rely on far too much rebounding from their undersized guards. Suddenly, the Hokies: have depth across the lineup; have a rotation that mirrors the current game of basketball, with length and athleticism in both the back and frontcourt; and still have a solid collection of dangerous perimeter threats.

Maybe even most importantly: Unlike in Williams' first season, the Hokies are less reliant on their true freshmen, giving them each the time they need to adjust to bright light basketball and find their fit within the rotation. Remarkably, Young's first full off-season looks quite similar to Buzz's, where guys like JVZ and Mueller (seriously, pour one out for The Umlaut) were replaced by highly regarded recruits Chris Clarke, Kerry Blackshear, Jr. and Justin Robinson. While the three contributed their first year on campus, none were relied on and each had an opportunity to deputize a more experienced player. As each player's career showed, that progressive implementation paid huge dividends year-over-year and eventually led to three straight NCAA Tournament bids.

Through four games — yes, this was written prior to Tuesday night's ACC/B1G Challenge — I'm resisting the urge to make hyperbolic statements about what we've witnessed thus far. Truthfully, the Hokies performance has been up-and-down enough to temper even the strongest knee-jerk reactions. Their strong performance in Bubbleville was followed by arguably the worst shooting performance of the Mike Young era.

The aforementioned depth will only get stronger as players like Diarra, Cone and Ojiako work themselves back into the rotation, lessening the burden on guys like Aluma, Alleyne and Tyrece Radford. Speaking of which, how did I make it almost 1,000 words without mentioning the Hokies' Swiss Army Knife? That feels almost criminal...

For these weekly versions of The Matrix, we will be playing a game of Buy/Sell/Hold. The goal is to identify trends occurring week-to-week within the larger context of the season. We will then update The Matrix proper on a quarterly basis throughout the season to subjectively assess how each individual falls into the various roles we have identified.

Okay, this one is easy. But in my defense, to not discuss Aluma's excellent first month of basketball would be negligent. I feel like I should begin by saying that we should temper all expectations for Aluma's season and try not to increase expectations for the junior post based on a limited sample size. While he has been far and away the Hokies' best player in each of the first four contests, he has a significant number of challenges in front of him.

Might I remind you of Landers Nolley's dominant start to last season and the loud boom we all heard when he crashed head on into the freshman wall? Yes, Aluma is a junior with an NCAA Tournament under his belt. But this will be the Wofford transfer's first taste of a full P5 schedule, which will test his ability to replicate his early season play against some of the most talented and athletic teams in America.

Regardless, Aluma's start to the year has been a revelation. As Joey rightly pointed out in the inaugural edition of Poppin' Kernels, the former soccer player (DRINK!) has the appearance of a more athletic Kerry Blackshear, Jr. I have been incredibly impressed by his post game and the array of moves he has shown with his back to the basket. He has backed players down from 15-feet out and bullied opposing bigs on the block with an exciting combination of strength and quickness.

Additionally, his face-up game and range have been surprisingly dangerous thus far, including shooting 6-13 from behind the arc. If the Stretch 5 look that he has shown early is the real deal, then his range provides a great opportunity for the Tech offense by forcing bigs to follow him out to the perimeter. Not only does this create additional chances on the offensive glass, but it decreases the defense's ability to clog the lane and increases the potential to draw cheap fouls (among others). If guys like Bede, Diarra and Cone can find a way to consistently execute the pick-and-roll with a guy like Aluma, opponents are going to be in trouble.

Listen, I don't expect Aluma to finish with an 18/7/1/1 line on the year. But thankfully, Mike Young's team has enough depth and potential across the floor to relieve Aluma of that pressure.

Okay, this may be a bit premature. Four games into his career, the true freshman wing has struggled to find his sea legs. The speed of the game appears to have gotten the best of him early on, and his year-plus without game action is likely a contributing factor. The good news is that Bamisile, along with fellow freshmen David N'Guessan and Darius Maddox, will continue to get reps in practice and hopefully earn opportunities to work their way into the rotation over time. With a sport like basketball, where freshmen regularly burst onto the scene and make considerable impacts despite their youth, it is only natural for fans to raise expectations for 18-year-old newcomers. I certainly expected Bamisile to slide right into the rotation and contribute early on. And to be fair to Joe, the season is still young. There is no doubt the kid can hoop. The question is whether or not he will be ready to do so this year. I'm all-in on Bamisile over the long-term, but I'm tempering expectations in the near-term.

A 6'-7" wing from New Jersey, Mutts transferred to Virginia Tech after averaging 12.2 PPG and 8.4 RPG for the Delaware Blue Hens in the CAA. Mutts' performances have been up-and-down thus far, alternating between underwhelming and effective.

Mutts' performance against USF was incredibly frustrating, but I noticed a more assertive version of him against the Keydets. There were a number of possessions midway through the first half where you could see the version of Mutts that led to 19 double-figure outings last season. He finished the game with 12 points on 5 of 9 shooting, 9 rebounds (4 offensive), 6 assists and 1 block. Though his versatility created some matchup problems for VMI, it was his demeanor that really jumped off the screen to me and ultimately led him to a quality stat line. Moving forward, I'm curious to see whether we will continue to see Jekyl and Hyde-like performances from Mutts or if Thursday's game is closer to what we can expect from the grad transfer. Like everyone else, time will tell.

Just when you though fam threads were back...oh well, cant win them all.