The Hokies and Cardinals sit atop the ACC standings with a 2-0 conference record. What does Virginia Tech need to do to pull off its first win against Louisville in 30 years? 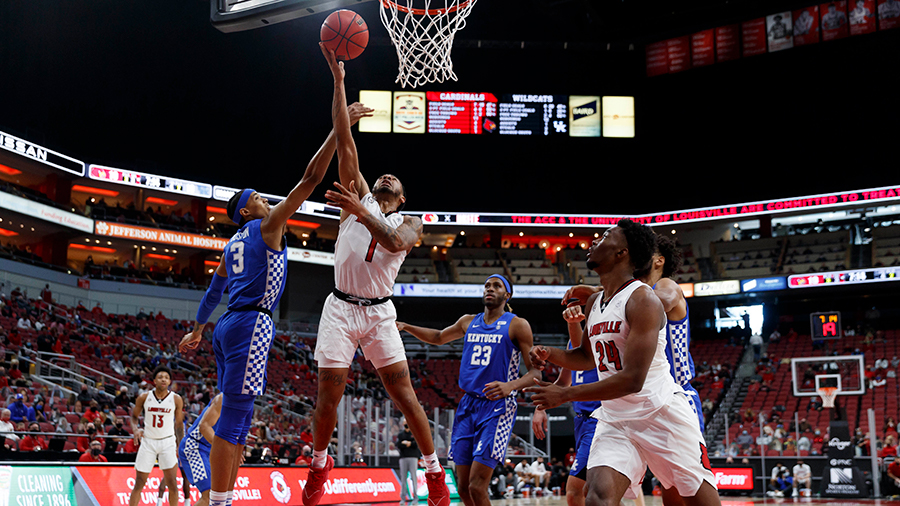 Carlik Jones goes for a layup during the game against Kentucky on December 26, 2020. [Louisville Athletics \ Adam Creech]

Some things of note about me: I'm a senior studying Sports Media & Analytics at Virginia Tech from Yorktown, Va. Born and raised a Hokie by my parents, both of whom are Tech grads, I always knew I wanted to end up at Virginia Tech. And here I am.

I'm a huge Star Wars, Marvel and Lord of the Rings nerd, I love root beer and a Microsoft Excel geek. A cool story I love telling: when I was six months old, my parents brought me with them to the Tech-Florida State National Championship Game with them in New Orleans.

I've covered Hokies athletics as a student since stepping foot on campus in August of 2017 and I'm thrilled to join Joe and the team at The Key Play. You can expect previews and postgame columns throughout the Virginia Tech men's basketball season, with a few features and analytical pieces along the way.

And with that, let's get right to Louisville. As Théoden once said, "So it begins."

Virginia Tech's series with Louisville has always been lopsided, with the Hokies having won just eight of 43 meetings. The Cards have won 16 consecutive games against Tech, with the last Hokies win coming almost 30 years ago on Feb. 13, 1991.

Coming off a second-place finish in the ACC in 2019-20, Chris Mack's Cardinals are ever so good — 7-1 overall and tied with Virginia Tech for first in the conference with a 2-0 record.

Like the Hokies' slip up against Penn State in early December in the ACC/Big Ten Challenge, Louisville was absolutely demolished by No. 12 Wisconsin, falling 85-48 in Madison. The Cardinals were short-handed against the Badgers and played without leading scorer Carlik Jones, who is averaging 16.4 points, 6.6 rebounds and 5.1 assists per game.

"He's a great player," Tech head coach Mike Young said Monday on the ACC coaches call. "Not a good player - a great player. He makes the right plays. He's unselfish. There's not a selfish bone in his body."

The former Radford Highlander transferred to Louisville in April and has led the Cardinals' resurgence as of late.

"He's very creative, he plays at his own pace and he generates a lot of offense for our team, whether he's scoring or setting a guy up," said Louisville head coach Chris Mack.

Since falling to Wisconsin, UofL has won three straight games at Pitt (64-54), vs. rival Kentucky (62-59) and at Boston College (76-64). It'll be a veteran matchup at the point guard spot between Jones and Wabissa Bede.

In the past, the Cardinals have been one of the more difficult matchups in the ACC for Virginia Tech because of their sheer size and athleticism, much like Florida State.

In last season's meeting, UofL scored 32 of its 68 points in the paint. John Ojiako started the game for Tech, one of the big's two, which shows how much size matters against the Cardinals.

In its last three games, Louisville scored 34, 32 and 36 points in the paint. The Hokies gave up 38 in the paint to Miami and 32 to Longwood.

Young & Co. are much lengthier this season and unlike the past, have options to match Louisville's inside strength. Three of the Cardinals' top six scorers are at least 6'8", so don't be surprised if Young matches size and Cordell Pemsl sees more minutes.

Expect a lot of help defense from Tech in an attempt to force the Cards to pull up from outside. UofL shoots around 34% from three-point range, which amounts to 157th in the country. The Hokies don't have to worry about Ryan McMahon this time around either, which is a plus. He scored 27 in the last two meetings against VT.

On the defensive end, Louisville has thrived this season, particularly as of late.

Per KenPom.com, the Cardinals are No. 22 in adjusted defensive efficiency and No. 34 in effective field goal percentage defense. The size really helps Mack & Co. thrive and is one of the main reasons why the Cardinals held Kentucky and Boston College below 35% from the field and 30% from three (25% for BC).

Virginia Tech sees about 35% of its points come from behind the arc, which ranks 65th in the country. The Hokies haven't been consistent in three-point shooting this season, hitting 40% just once (against Coppin St.) since the big win over No. 3 Villanova in November.

If Tech wants to pull off a win in the KFC Yum! Center, it has to be able to hit from deep when needed.

Other Louisville Names of Note:

David Johnson, a 6'5" guard, is the team's second leading scorer with 14.4 points, 6.3 rebounds and 4.0 assists per game. The other part of the Cardinals' dynamic backcourt duo has scored in double figures in six straight games. In 22 minutes against the Hokies last March, he contributed eight points, six assists and four rebounds. He's also lethal from behind the arc, shooting at a 45% clip.

A 6'7" forward, Samuell Williamson averages 10.0 points and 6.2 rebounds per game. He's been on and off in the scoring column for the Cards this season, though he did rack up 12 points on Jan. 2 at Boston College. A dynamic player that can step out and hit the occasional three-pointer, Williamson is someone the Hokies will need to keep a close eye on.

Jae'Lyn Withers is another lanky and crafty option for Louisville. A 6'8" forward from Charlotte, Withers has started all eight games for the Cardinals and averages 9.0 points and 6.9 rebounds per game. The most efficient scorer in Chris Mack's starting rotation, Withers shoots 57% and has scored at least two baskets in all but one game this season. He's Louisville's best rebounder, having recorded at least six rebounds in all but two games in 2020-21.

What to Watch For:

The Cardinals dominated the Hokies in two important areas in last season's matchup: rebounding (40-26) and turnovers (12 to VT's 16).

Louisville scored 13 second chance points to Tech's two, and in a game where the Hokies shot the ball poorly (38% FG, 33% 3FG), UofL added 19 points off turnovers.

Last game against Miami, nine of Virginia Tech's 11 turnovers came in the second half. The Hokies handled the ball extremely well in the first half but were careless in the late stages as the Hurricanes sped the game up.

"There's a nice gear for us around three or four," Young said after Tech's win over Miami. "But when we get up to five, we don't handle that very well. Our decision making isn't very good at that gear."

At the same time the Hokies were racing up the floor against Miami and giving away late Christmas gifts in the form of turnovers, they struggled on defense, allowing the 'Canes to shoot 55% from the field and 50% from deep.

If Virginia Tech can limit Louisville on the boards and protect the basketball, the rest should take care of itself. The Hokies need to keep the Cardinals in the halfcourt offense and not let them run in transition. The more turnovers and rebounds for Louisville, the tougher the path to victory for Tech.

Welcome David and thank you for your contribution! Let's Go!

A cool story I love telling: when I was six months old, my parents brought me with them to the Tech-Florida State National Championship Game with them in New Orleans.

I remember when I was young enough to make fun of people for their age, man I miss those days.

Excited for this move by The Key Play. A Bill Roth disciple. Sneaky quick. A real first in, last out kind of guy.

VT's best team the past 40 years couldn't beat the Louisville Petino fall out team in Mack's first year, amid the huge shoe scandal, etc. I am highly skeptical until we actually beat them.

At least they don't run the triple option.

They used to run it under Petrino - the three options were cash cars and women.

Thanks and welcome David! One word of advice: if you're thinking about getting a masters from tech or just staying longer than you normally would

Yeah take a victory lap and stay as long as you can. Real world sucks, yo.

As Gill in Finding Nemo said: "Good work!"
(couldn't find a gif for this)

Great article and welcome to TKP. Looking forward to reading your future work.

You can say it, but you cannot actually give a staff member a leg until they comment. (Hint to David)

Since there wasn't any place to actually "give" a leg, I figured I'd just say it.

Wow...30 years. And I was in Cassel for that last win. Little did I know it at the time it would be our last against them for this long. Denny Crum was PISSED that day, it was glorious.

This place can use more star wars references, welcome david nice write up!

We got this backwards.

Hi David, from your Southside Relative and Hokie Alum. Great to see you contributing on TKP. Good insight and info, hopefully we can pull this off.

I simply won't believe we can beat Louisville till it happens. It's just one of those teams. Remember in 2016 when we made 17 threes while shooting 65% from three? We still lost that. Hope I'm wrong. Go Hokies!

Seth Allen made a couple from out near half court in that one, too bad he's not suiting up

Ahmed Hill banked one off the top corner of the backboard towards the end of the first half that game. The Louisville bench was actually cracking up behind him. We were unconscious that day.

How do you feel about growing a beard?

Nice write up. I think you and Lt. Rob complement each other to a degree. The more b-ball write ups the better!

Welcome aboard David. Louisville is another place, similar to Pittsburgh in football, that we just don't play well down there. I flew down to a tournament game with some friends, I believe it was the old Metro conference. We were in first place and had to play the last place team Louisville. Our flight landed at 10:00 am, the game started at 12:00 pm and by 2:30 pm we were out of the tournament. So I agree with the sentiment here that I won't believe we can win until we do. Go Hokies!

OMG, I had to look twice, that's the REAL D CUNNA!!

Come on in, the water's warm