Hokies Look to Bounce Back Against Notre Dame

After a tough performance against Louisville on Wednesday, Mike Young said he was "certain" Virginia Tech would play better on Sunday. What's Tech's outlook against a Notre Dame team that is better than its record indicates? 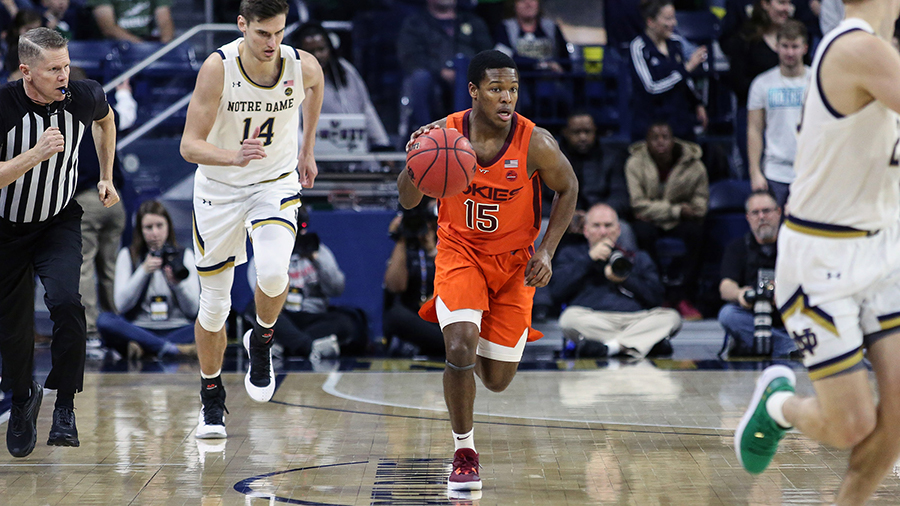 Despite an uphill battle on a poor shooting night at Louisville on Wednesday, No. 19 Virginia Tech (8-2, 2-1) showed grit and toughness, fighting until the end and falling just short, losing 73-71.

Mike Young & Co. now turn their attention to Notre Dame (3-6, 0-3 ACC), which sit at the bottom of the ACC. The Irish have struggled this season, though are better than their record indicates.

The average scoring margin in Notre Dame's six losses is just 6.67 points, and all three of the Irish's conference games have been within ten points. In its most recent game at North Carolina on Jan. 2, Notre Dame fell by one, 66-65.

Like most programs, Notre Dame has felt the uncertainty and effects of navigating a schedule during the pandemic. Mike Brey's squad has had two ACC games postponed this season (Syracuse on Dec. 22, Georgia Tech on Jan. 6) due to COVID-19 issues in opponents' programs.

Its trip to Cassell is the program's second of six consecutive road appearances. After visiting Blacksburg, the Irish will travel to Virginia, Boston College, Howard and Miami before hosting the Hokies on Jan. 27.

Sunday is the 14th meeting between the Hokies and Irish, a series that Notre Dame leads 9-4. Brey's bunch won four of seven meetings with Tech under Buzz Williams and got the best of Young in his first season, knocking off the Hokies 64-56 in Purcell Pavilion last March.

That happened to be the last game of the regular season and Virginia Tech did not start well. The Hokies shot 6-28 (21.4%) in the first half and 3-17 (17.6%) from three. The Irish killed the Hokies on the boards and outrebounded Tech 26-15 in the first half.

There must've been a lid on the basket early because the Hokies went almost 12 minutes in the first half without a field goal.

Jalen Cone and Landers Nolley finished a combined 3-20 while P.J. Horne (14 points) Hunter Cattoor (12) led Tech in scoring. The Hokies weren't plagued by turnovers (nine), rather they struggled to score and compete in the rebounding category (44-27, Notre Dame).

Nate Laszewski (pronounced La-SHEH-skee) has been on fire as of late. The 6'10" junior forward has scored in double figures in four straight games, including 28 points vs. UVa and 25 at UNC. He's the first Notre Dame player to have 20 points in back-to-back games since Bonzie Colson did so in February of 2017.

Some stats on the Jupiter, Fla. native:

Bottom line: he's good. He's shot better than 50% in every game this season and has hit at least one three in every game. In last year's contest, he had seven points (3-4 FG) and three rebounds in 22 minutes off the bench.

Laszewski is also an animal on the boards, averaging 8.2 rebounds per game. He's a matchup nightmare for the Tech player that has to guard him since he can stretch defenses and play both inside and out. It'll be interesting to see how Young sets up his defense to defend him and if they'll change anything specifically for him.

By my count, the only other time Virginia Tech has faced a team with a star player with a potential professional future this season was back in November against Villanova and Collin Gillespie. The talented senior was fantastic against the Hokies, scoring a season-high 25 points on 8-14 shooting.

Laszewski isn't exactly the NBA prospect Gillespie is, though he's starting to draw more attention. Tech needs to make sure they know where he is on the floor at all times.

Prentiss Hubb is the floor general for the Irish. The 6'3'' point guard averages 14.8 points and 4.5 assists per game. The junior from Upper Marlboro, Md. has 70 career starts and rarely exits the floor, averaging 38 minutes per game.

As one would expect, Wabissa Bede will guard Hubb. One of Tech's best defenders, he should be able to match him on both ends of the floor and limit some of his scoring.

Something to keep an eye out for: where Hubb plays almost every minute for the Irish, Bede only averages 26 minutes per game. Without Cartier Diarra, the backup point guard responsibility has mostly fallen to Hunter Cattoor. The always energetic sophomore is a talented defender but not the most experienced ball handler.

The inexperience didn't hurt Tech against Louisville, where Cattoor had one assist and one turnover, but might against a veteran guard in Hubb that averages one steal per game. Cattoor is usually very reliable on the defensive end — he leads the Hokies in charges taken this season with 10 — but might be susceptible to turnovers offensively against the Irish.

Dane Goodwin has been inconsistent as of late for Notre Dame, scoring just five points against Virginia and six against North Carolina.

The 6'6" junior guard is an efficient veteran though, particularly from long range. He's connected at a higher rate from behind the arc in 2020-21 as a starter, making 42% of his shots after hitting 38% in 2019-20. The Upper Arlington, Ohio native is Notre Dame's third leading scorer, averaging 13.8 points per game, and is second on the team in rebounding, averaging 5.4 boards per game.

Goodwin is very similar to Louisville's Jae'Lyn Withers, who Mike Young called "the wildcard" in Wednesday's game against the Cardinals. He doesn't draw the attention that the two other stars — for UofL, Carlik Jones and David Johnson; for Notre Dame, Laszewski and Hubb — draw.

Against Louisville, the Hokies chose to focus more on Jones and Johnson, which meant Withers had the opportunity to make the Hokies pay. He did, with 16 points and 12 rebounds.

If Tech plays Notre Dame similarly and focuses more on Hubb and Laszewski, Goodwin has the chance for an impactful performance.

Style of Play and Impact on Virginia Tech

While Virginia Tech is fairly balanced in terms of efficiency on both sides of the court, Notre Dame is great in some areas and poor in others.

In addition to those three-point statistics, the Irish see 40.1% of their points come from behind the arc, a percentage that ranks 18th in D-1 in terms of point distribution.

What those stats mean: Notre Dame is an efficient shooting team and scores most of its points from deep, while not turning the ball over much.

Compare that against Virginia Tech's defensive ratings. The Hokies are No. 52 in adjusted defensive efficiency, No. 147 in effective field goal percentage and No. 209 in turnover percentage. Tech is No. 223 in three-point percentage (34.6%) and No. 70 in free throw percentage (66.5%).

The Hokies are also No. 107 in three-point distribution defensively, with 33.2% of all points allowed from downtown.

If the Hokies can defend the three-headed monster of Laszewski, Hubb and Goodwin and run the Irish off the three-point line, one of Notre Dame's biggest strengths, Tech should be fine defensively.

It's a different story on the defensive end for Notre Dame. The Irish don't force many turnovers — they rank near the bottom in the country with a 12.1% turnover percentage (344 of 357), which is calculated by the amount of turnovers divided by the number of possessions. Meanwhile, the Hokies turn the ball over on 18.2% of their possessions (No. 106), another metric that Tech is above average in.

Where the Irish excel is in terms of fouling. Notre Dame leads the country in defensive free throw rate, a statistic calculated by the number of free throw attempts divided by field goal attempts, which shows a team's ability to get to the free throw line. The Irish have a rate of 18.2%, while Tech is one of the better teams in the NCAA in that category, getting to the line at a rate of 38.3 (No. 59).

If Notre Dame can stay out of foul trouble and keep the Hokies away from the charity stripe, a place where Tech scores 20% of its points, the Irish will have success. If the Hokies want to bounce back from the Louisville loss, they have to get to the foul line.

Like most ACC games, expect a dogfight. The Irish are a big, stubborn club, but the Hokies are better. Virginia Tech is playing on its home floor, where they boast a 6-1 record this season, and have won four in a row. If Tech executes the game plan and plays to its strengths, it should come out on top in Cassell against the Irish.

Did not see this until after the game, but really nailed it with the want to expect. Well done.