The Hokies face their second true road test of the season at Wake Forest on Sunday. How Tech matches up with the Demon Deacons and a look ahead at the middle chunk of the ACC schedule. 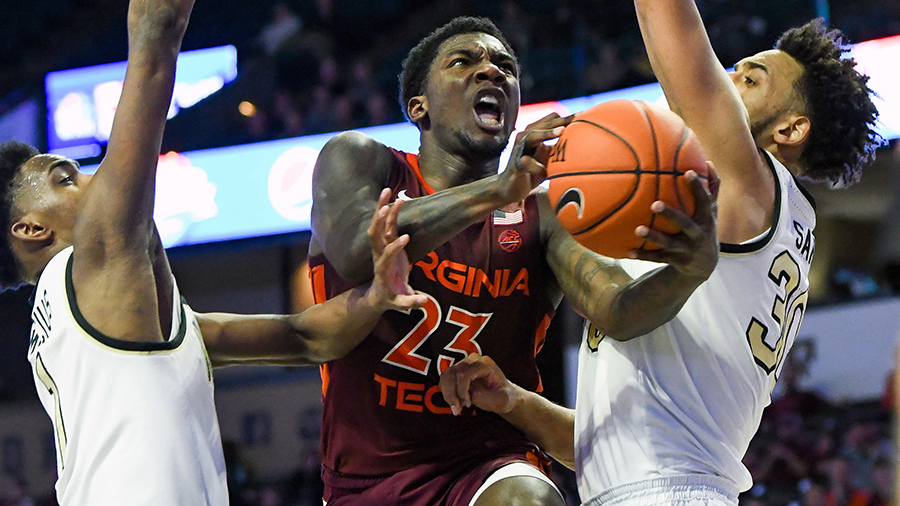 After back-to-back wins over Notre Dame and No. 19 Duke, Virginia Tech (10-2, 4-1 ACC) turns its attention to a struggling Wake Forest (3-4, 0-4) club searching for its first conference win.

COVID-19 issues within the Demon Deacons' program postponed or canceled five games in the month of December, including league contests against Virginia and Syracuse.

Like many other teams around the country, Wake Forest has struggled to find its footing after an absence from the hardwood. Steve Forbes' squad has lost four games in a row, including three against ranked foes — at No. 22 UVa, at No. 21 Duke and vs. No. 16 Louisville on Wednesday.

Virginia Tech has won seven of the last eight games against Wake Forest and knocked off the Demon Deacons 80-70 in Winston-Salem in Mike Young's inaugural season. The Hokies lead the all-time series 36-31 and have won 16 of the 23 meetings since joining the ACC in 2004.

Landers Nolley and Tyrece Radford each dropped 21 points in Tech's win in LJVM Coliseum last season, which was the Hokies' fourth ACC win of the season at the time. Radford also grabbed 13 rebounds and absolutely bodied Wake's Olivier Sarr with a SportsCenter Top 10-worthy dunk.

The Demon Deacons couldn't do anything to stop the Hokies on the offensive end as Tech shot 49% from the floor overall and 60% (15-25 FG) in the second half. Jalen Cone (15 points, 4-6 3FG) and Nahiem Alleyne (10 points) scored all 25 points off the bench for the Hokies in the victory and were clutch when needed.

VT also handled the ball well, turning it over just nine times, while forcing 18 Wake Forest miscues that led to 19 points. Tech held the Demon Deacons to 35% shooting in the first half and 20% from behind the arc in the second to hang on for the win.

Sunday's meeting will be the second between the two programs with Tech ranked. The only previous occurrence was February of 1976 when the then-No. 18 Hokies held off Wake Forest 102-95 in Blacksburg.

Daivien Williamson is the go-to guy for the Demon Deacons. Averaging a team-high 11.4 points per game, the 6'2" guard from Winston-Salem is Wake's floor general. He scored a season-high 19 points against Louisville and is a very efficient shooter at 66%, which ranks 98th in the nation.

He averages 33 minutes per game so expect to see a lot of No. 4 on Sunday. He followed Forbes and transferred from ETSU to Wake Forest and was a SoCon All-Freshman Team nominee in 2018-19.

Jonah Antonio is to Wake Forest as Jalen Cone is to Virginia Tech. The 6'5" guard from UNLV is third in the ACC in three-point field goals made per game at 2.5 (Cone is first) and is second in the conference in three-point percentage, shooting 42%.

The Perth, Australia native scored 11 points last time out against Louisville, though he was held to 2-7 shooting from deep and scored five of his points from the free throw line. He averages nine points per game and is the three-point threat Tech has to keep an eye on.

Isaiah Mucius, a 6'8" forward from East Patchogue, N.Y. is the team's greatest post presence. The only player to start all seven games for Wake Forest this season, Mucius averages 10.3 points and 5.3 rebounds per game.

In last year's contest, he finished with two points (0-5 FG, 0-2 3FG) and six rebounds. He struggled to score against Louisville, finishing with four points, but had his best rebounding performance with eight boards. Should he play well, he could be the x-factor for the Demon Deacons.

Outside of the Virginia game where they shot over 50% from the floor and from three, in ACC play Wake Forest hasn't shot well from deep (15%, 30%, 25%). KenPom's formula weighs three-pointers more heavily and Wake Forest is 14th out of 15 ACC teams in that category, which is why its number and ranking in effective field goal percentage dips in conference play. Wake is fifth in two-point percentage in the ACC, though, which indicates that they really are more of an inside team than outside.

They're a good free throw shooting team, too (75.4%, No. 5 nationally). The Demon Deacons are very turnover prone on the offensive end, though — worst in the ACC in turnover rate and offensive steal rate — which plays to Tech's advantage.

The Hokies have forced at least 12 turnovers in every game dating back to the November loss against Penn State, which was meaningful. Against the Nittany Lions, they forced just five. Tech is better when it can get a few stops, mix up the transition game with the half court offense and be very methodical about its offensive approach. Forcing turnovers facilitates that play.

This season, Virginia Tech is 8-0 in games with a zero or positive turnover margin. The Hokies have gotten progressively better in that category as the season has drawn on, because all four games in which Tech had a negative turnover margin occurred in the first six games of the season: Villanova (-6), VMI (-2), Penn State (-9) and Clemson (-3).

Wake Forest is sixth in the nation in overall steal rate, which could cause trouble for Tech, though that number is average in ACC play. The Demon Deacons forced 10 turnovers against the Cardinals, 14 against Duke (VT forced 12) and six against UVa, so the numbers against conference foes aren't fantastic.

Perhaps most importantly, the Demon Deacons are dead last in the ACC defensively in effective field goal percentage. For comparison, Tech is seventh offensively.

Carlik Jones (23 points), Matthew Hurt (26 points) and Sam Hauser (16 points) all had efficient games against Wake Forest on the offensive end. Should the Hokies play their cards right, it will be a similar situation in Winston-Salem on Sunday. Expect one of Keve Aluma, Cone, Radford or Alleyne to have a nice night.

At the beginning of this season, I broke up Virginia Tech's ACC schedule into three parts: the first six ACC games (Clemson through Duke), the next seven games (Wake Forest-Miami) and the final seven games (Florida State-NC State).

The front and back parts of the schedule are weighted pretty heavily with Clemson, Louisville (twice), Duke, North Carolina and Florida State (twice). The middle, however, is where the Hokies need to gain ground on the rest of the ACC. Tech's next seven games are at Wake Forest, vs. Boston College, at Syracuse, at Notre Dame, vs. No. 18 UVa, at Pitt and at Miami.

That's a look at Virginia Tech's margin of loss in games decided by ten points or less last season. All of these were competitive games where the Hokies couldn't overcome a poor shooting start, or brought the game down to the wire, but it slipped away.

Tech is better prepared to win any tight contest over this upcoming stretch. The team has size, can score inside and out, rebounds well, forces turnovers and takes care of the ball. Last season, Tech lacked the size, wasn't great on the boards and when the three-point shot wasn't falling, it faltered. It's a much more balanced and veteran group that never seems completely out of a game.

The Hokies should cruise past Wake Forest on Sunday. However, it's the rest of the middle of the schedule that intrigues me, with five opponents that Tech lost to by an average of five-and-a-half points last season in a combined four overtimes. It's an opportunity for the Hokies to extend their hot streak.

David almost made me cried when I read this:

Really sad day when 75.4% ranks 5th Nationally. Especially with how the free throws can be the absolute difference in games like you touched on above, with less than 6 point margin.

That is insane to think about. Especially in empty stadiums.

There is no reason a P5 player cannot make 80-85% in an empty arena. No distractions, no wind, just muscle memory.

Really curious to see where that rank comes from? Cause NCAA has Wake shooting 77% and ranked 24th nationally? 5th is Pepperdine shooting 80%

Yeah was going to dive deeper in as I finish up my writeup tonight, was curious about it but out and about right now.

One thing I expect to find that will likely work in Techs favor is that the Hokies likely go to the line more than Wake but I could be off base there. Will know more tonight after deep diving the stats

Wake has attempted 140 ft in 7 games, while the Hokies have attempted 250 ft in 12 games, so the Hokies attempt one more on average per game and the teams generate essentially the same amount of points per game.

Wake though has not faced as multifaceted an offense as Tech presents. I will touch on that more with my writeup.

I just came to post that because I finally had time to look... so good work!

Thanks for your contributions, David! You're doing some very nice work, and it is very much appreciated.

How does uva have a higher net ranking than us?

Biggest contributing factor to this is that UVA is 2-0 on the road and Tech is 0-1. That will separate you two spots in NET Rankings.

Those are the big differences so far. Normally by this time teams have already played 18-19 games and there is more separation.

The crown jewel though is #7 Illinois who looked to be a world beater early but has been exposed several times now, is 9-4, 6-4 in Quad 1/Quad 2. No team with four losses in thirteen games should still be that high.

Don't worry about Clemson anymore, they just got dismantled by UVA. 85-50. Clemson just looked lost on both ends from the beginning

I'd prefer UVA losing, I haven't worried about Clemson for weeks, we beat them, noneed to worry about past victories.

Miami just knocked off Louisville with a great first half.

Honestly think everyone past us, FSU, and UVA is a bunch of meh. Duke and UNC are fine. I've been underwhelmed by Louisville and Syracuse. FSU might be the best team overall, the home game vs them looms large in the race for first place in the ACC.

I've been underwhelmed by Louisville and Syracuse

We did lose to Louisville though. We may be the better team when it's all said and done but we can't talk trash yet.

And Texas Tech checks in with a fourth loss, albeit a Quad 1 loss to #2 Baylor

The best part of the video clip is the kid who appears to be a wake forest fan clap at Radford dunking on that Wake guy.

The Hokies should cruise past Wake Forest on Sunday

Might not be easy, they've hung tight with Louisville, Duke, and Uva for large stretches of the game. We are definitely favorites, but I wouldn't be surprised if Wake Forest makes it competitive, at least for a while.

Also, another Wake Forest player worth mentioning: Isaiah Wilkins. He doesn't play much, but it'll be nice to see Chico again.