The Virginia Tech men's basketball team had ups and downs and now it looks to make a March Madness statement. 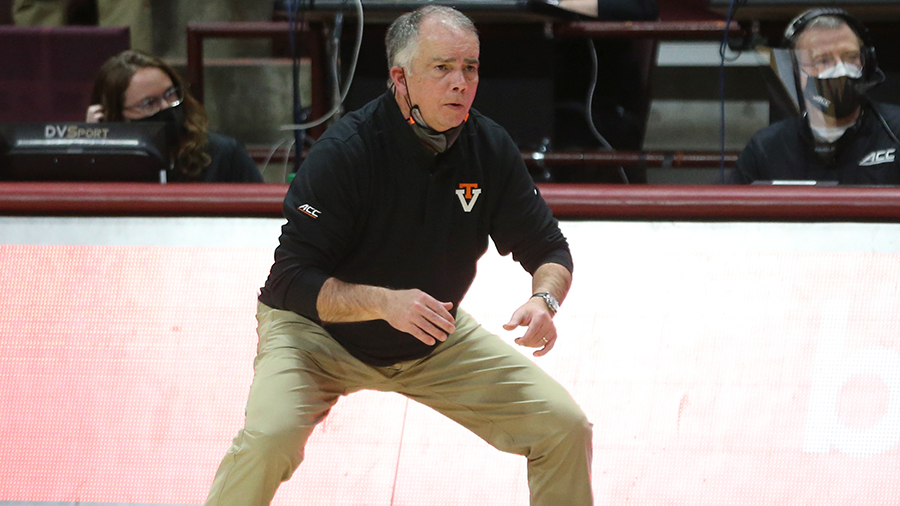 Friday marks Mike Young's sixth trip to the NCAA Tournament, and aside from the obvious restrictions due to COVID-19, it's more different than ever.

The Radford, Va. native, who grew up watching Allan Bristow and Virginia Tech's 1973 NIT Championship team, will lead the Hokies to their fourth straight trip to the Big Dance in just his second season.

"I'm thankful, appreciative of the people I work with on a daily basis, the people I work for, and the players," Young said during a Tuesday press conference. "We've hit all the stops and we've done things the right way. ... I feel great about our progress in a short amount of time. There's a reason why we're here. I'm not very good, but I'll tell you what I am good at, and that's not messing something up. I've got something good going, and I'm very respectful and cognizant of that."

The Hokies (15-6, 9-4 ACC) are a 10-seed in this year's tournament and face seventh-seeded Florida (14-9, 9-7 SEC) on Friday at 12:15 p.m. on CBS in Hinkle Fieldhouse. The tournament is solely in Indianapolis this year due to the pandemic, which has equated to the Hokies quarantining in the hotel since arriving on Monday afternoon.

"I've been to a lot of places but never to Butler's campus or Hinkle Fieldhouse," Young said. "We go over [on Wednesday] and have an hour-and-a-half practice and I'll look forward to that. As a basketball person and the history in that building, that'll be a lot of fun for me."

The anything but ordinary trip to Indy is the cherry on top to Tech's season to this point, one that has felt like a roller coaster ride.

The attraction has included just three games in the past month due to COVID pauses. Less than a week ago in Greensboro, VT struggled to hang around with North Carolina in the second half in the ACC Tournament quarterfinal, falling 81-73. Tech led at halftime but did not have the legs, nor the rhythm and athleticism, to compete in the late stages with the Tar Heels.

That hasn't been the case all year long, however. Young & Co. won 13 of their first 16 games and knocked off three NCAA Tournament teams in Virginia (4 seed), Villanova (5) and Clemson (7). The three other ACC schools in the field — North Carolina (8 seed), Georgia Tech (9) and Syracuse (11) — all beat the Hokies by double digits and handed them three of their six losses.

It wasn't so long ago that Virginia Tech was on a roll and dominated Virginia in Cassell Coliseum, going on a late 19-0 run and holding the Cavaliers to 37% shooting.

That's the groove the Hokies are trying to rediscover in the Hoosier state.

"When you're off 10 days or two weeks, it takes its toll," Young said. "I do feel a lot better coming into the NCAA Tournament. ... They know where we are, they're smart people and understand what's at stake. ... We're playing in the best tournament of them all, let your ears back and let it rip. That's what I expect our team to do on Friday."

His presence did draw defenders and open up opportunities for Justyn Mutts and Tyrece Radford, who combined for 44 of Tech's 73 points, but VT needs its best scorer to advance in March.

"We went right at him early and I think it was [Armando] Bacot that was on him [Aluma]. He looked a little spooked," Young said. "Going back and looking at it, he played a good ball game. He didn't score the ball as well as he did for most of the year.

"I just thought he, for the first time in a long time, looked like he was on his heels offensively. I expect him to be a lot better up here, we need him to be a lot better up here. He is such an important part of our team and what we do. ... He played in this tournament two years ago vs. Seton Hall and Kentucky. He's a hell of a player, he's had a hell of a year and he's going to be good on Friday."

In place of Aluma, Mutts picked up the slack, scoring 24 points and grabbing eight rebounds. The Millville, N.J. native has been around the block with stops at High Point and Delaware before Virginia Tech and is thrilled to have an opportunity to compete on college basketball's greatest stage.

"I'm ecstatic, I'm so excited," Mutts said. "I felt like this was all a part of the plan. We had a really good season and I trusted Coach Young when I committed here. I trusted all the coaches when I committed here. ... At the end of the day, we are just playing basketball. The lights are still going to be bright and you still have to go out there and perform. Regardless of the title or the logo, it's still just basketball."

The pair of Mutts and Aluma has been a reason why Young has elevated the Hokies to new heights in year No. 2. He's also done it thanks to Wabissa Bede, who Mutts called Tech's "defensive anchor," and strong play from a core of sophomores and freshmen.

Though guard Jalen Cone will be unavailable against the Gators due to an ankle injury, Young knows his team has the depth off the bench and the overall team chemistry to compete with the Gators on Friday afternoon.

"I've said it a thousand times: We're going to score enough to win," Young said. "Can we defend Florida, can we rebound enough, can we take care of the basketball – those are the things that will determine whether we get out of there alive on Friday."

"Something he [Young] always says is to put the team first," Mutts said. "It's never about you, it's always about the team and what could you do to help this team be successful. ... I think that's probably one of our biggest strengths as a unit, our togetherness and our ability to want to root for one another."

In a historic venue with limited fans and the highest stakes to date on the line, Young and Virginia Tech hope to extend their Indianapolis stay with a win over the Gators on Friday.

Technically we are the 10 and Florida is the 7. But I can understand how that got mixed up in the article, the NCAA got it wrong.

....will lead the Hokies to their fourth straight trip to the Big Dance...

Being realistic, this is a restart of a streak. We weren't gonna be dancing last year even if there had been a tournament. What we can be realistic about is this is (hopefully) the start of Mike's streak, his team, and a new era of Hokie basketball expectations.

At tipoff Friday VT will have played in the last 4 tournaments. That is 4 straight no matter how you slice it.

This fact never once crossed my mind when I read that quote. I somehow forgot last year's tournament was canceled.

I read a quote from the Florida coach that his team is exhausted. They lost to Tenn twice in the span of 6 days.

I also saw that we have only played 5 games since Feb 1st, least in the field. Classic rest vs rust I guess.

Wait, are we the rest or the rust in this matching? /s

First we were hopeful to have Cone back for the ACC tournament. Then when he wasn't able to go for that, we were hopeful we'd have him for the NCAA, and now he is officially out. Any intel on why his return keeps getting delayed?