Film breakdown and preview of the ins and outs of seven-seeded Florida, Virginia Tech’s first opponent in the Big Dance. 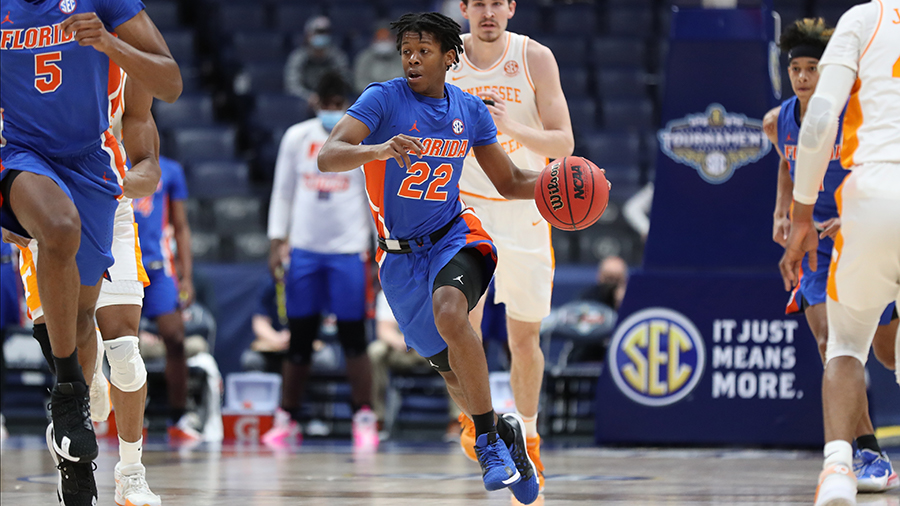 Virginia Tech's opponent in the Round of 64 of the NCAA Tournament is seven-seeded Florida (14-9, 9-7 SEC), a tall and athletic team with the majority of its roster 6'5" or above.

Tyree Appleby (22), a 6'1" junior from Jacksonville, Arkansas, runs point for the Gators. He's a solid scoring option at 11 points per game, plus he's a solid distributor, too (under 3.5 assists per game).

Watch Appleby throw a perfect lob to 6'11" Colin Castleton (No. 12), Florida's center, on the opening possession against Tennessee.

Even though forward Anthony Duruji (No. 4) gets stuffed at the rim and doesn't get the bucket, it was still a really good look by the Gators and shows you what their size can do.

How Tech defends that height is an interesting question, but keeping Florida's bigs like Castleton away from the rim and anticipating alley-oops is a place to start.

Speaking of their size, the Gators have the ability to switch almost everything on the defensive end because of their length. The next clip highlights an initial screen and a double, and the ball is tossed into the corner where there's a second double.

The problem with the doubling in the corner, though, was that it left a Tennessee player open on the wing. John Fulkerson (No. 10) made a great pass to Corey Walker Jr. (No. 15), and the pump fake (Nahiem Alleyne-esque) sold it, providing him with an open jumper just inside the arc.

If the Hokies can get the Florida defense out of sorts with the ball movement, creating mismatches and pure chaos, it may result in open looks, which feeds right into the strength of Mike Young's shooters.

UF's ball movement was really solid in this next clip.

There were five passes around the arc, with a few screens thrown in. Appleby was the final Florida player to touch it, and he took possession in the corner. He received a double screen, matching him up against the taller defender , the 6'9" Fulkerson (No. 10), who was guarding 6'10" forward Omar Payne (No. 5).

The shifty Appleby burst around the screen and his defender, Fulkerson, and that provided him a solid second to release a wide open three from the top of the key.

Tech needs to be aware of that quick ball movement. The Hokies can switch 1-5 if needed thanks to the athleticism of Keve Aluma and Justyn Mutts, but Florida screens multiple times on almost every possession, expect it to happen fairly often.

The fourth snippet is one full offensive possession by Tennessee. The Gators switched three different times on the play, and it looked seamless.

Florida's problem occurs when the Gators collapse on the lane and have two of their bigs guarding Keon Johnson (No. 45). As a result, Josiah-Jordan James (No. 5) was open and he knocked down the shot from the top of the key.

UF is fourth in the country in blocked shots per game (5.4 per game) thanks to the numerous giants it has on its roster. While the natural movement for those players is to crash the lane, it fails in circumstances where the opponent can quickly kick the ball around the arc to find the open player.

Between the constant switching and heavily defending the rim, Florida concedes some open looks throughout the game from the outside. If the Hokies can move the ball, find that opportunity and bury it, it'll give VT a leg up on UF.

The fifth play was something Tech killed North Carolina with on the offensive end in Greensboro — the backdoor screen.

And the Gators ran it to perfection here. They spread out the floor while Scottie Lewis (No. 23) slipped by his defender for the easy bucket. Fulkerson (No. 10) had his eyes on the ball, making it even easier for Appleby to find Lewis.

The Hokies will see this look multiple times in Hinkle Fieldhouse on Friday and need to keep their eyes peeled. As Tech knows from its first half against UNC, if you can execute it properly, it's golden.

Another strength of the Gators, whether it be Appleby or Tre Mann, is its guards can get to the rim at will. Appleby dribbled left with one screen, turned uphill and then charged at the rim for the contested layup, which he made look easy.

Mann, Florida's leading scorer at 16 points per game, can do that too. Young is confident that Wabissa Bede, Tech's best defender, will match up well against the 6'5" guard.

"That'll be a critical matchup for our team on Friday with Mann," Young said. "I can't think of anybody I've had in my career that I feel better about guarding such a dynamic scorer as Wabissa Bede."

Mann did not play in the final regular season game against Tennessee (migraine). However, he presents a huge challenge for the Hokies, though, because of his ability to create something out of nothing.

And as the previous clip demonstrates, Appleby clearly can do the same thing. If Bede, Hunter Cattoor, Alleyne and Tyrece Radford can square their hips and keep the Gators from driving downhill towards the rim, Tech will have a chance to be successful at the defensive end.

The final clip shows what can happen if Florida over-commits on its help defense. Castleton and Lewis followed Keon Johnson (No. 45) and left James (No. 5) open on the opposite wing. A cross court pass later, and the Vols were in business as James drove to the rack and drew the foul.

That's a weakness Tech might exploit. The Gators switch often but sometimes leave a man unchecked, which is where the Hokies need to take advantage. If Virginia Tech can get Florida to double or overcommit, it simply has to find the unguarded teammate for an open three or a drive to the rim.

Overall, Florida is a large team that can matchup with almost anyone defensively. Mike White's squad likes to help with a double team (expect many on Keve Aluma) and protects the rim well, but occasionally leaves an outside shooter open in the process. Virginia Tech needs to take advantage of those looks if it wants to advance.

On the other end, the Gators are a talented scoring bunch with five players averaging in double figures. Mann, Castleton and Appleby, coupled with Keyontae Johnson (will not play) and Noah Locke, make UF a difficult team to defend.

VT's defense, which was successful in forcing plenty of early turnovers against UNC, needs to be aware of Florida's guards and their ability to get to the rim. In the ACC, there were very few players — Jose Alvarado, Carlik Jones, Prentiss Hubb come to mind — that Tech faced that could drive into the paint at will.

Combine Florida's guard play with its size and Virginia Tech is going to have itself a field day on the defensive end trying to defend Florida's length.

"It's the Gators," Young said. "Mike White does a terrific job and we have our hands full. ... Formidable to say the least, the kid [Tre] Mann at the point is terrific and just another good basketball team, which you expect from the SEC."

David, thanks for putting this together. Great article and insights. Their length is definitely concerning, but I would like to think our matchup with UNC woke us up to the difficulties of guarding some big dudes. I hope we can spread them on offense and make them pay.

(Looks at the Hokies' last game result)
Oh yeah we are due for a win. That trumps everything in this article, right?

Will the game be streaming anywhere? My plan is to watch the first half from my office, then jet home for my lunch break to catch the second half

edit: never mind, just realized I can login to my hulu account from work and watch it there

The game will be streamed on NCAA.com and on the March Madness app.

The Tech broadcast of the game will also be available via TuneIn.com and the TuneIn app.