One of the top RB prospects in the 2019 class is fresh off a Virginia Tech visit. 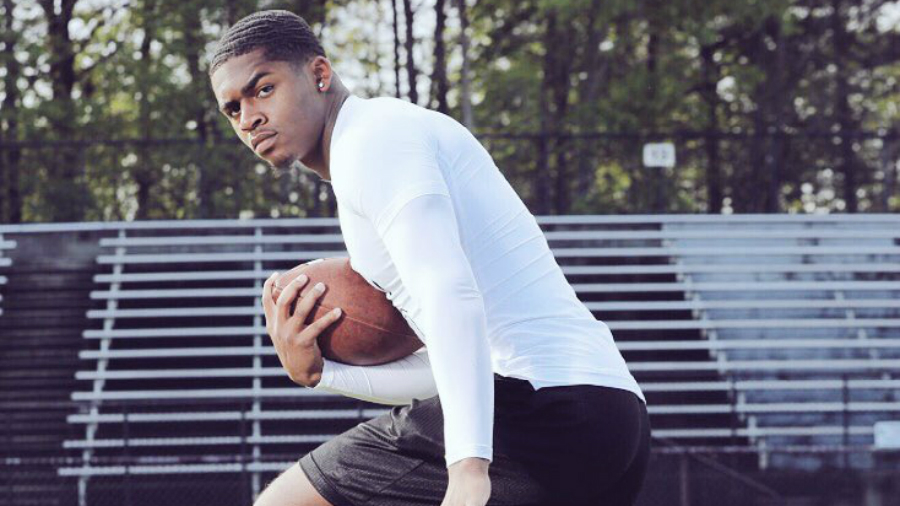 At just 5'11" and 185 pounds, 2019 RB Devyn Ford of Virginia's North Stafford HS doesn't exactly look like the sort of guy who can hit the dining hall hard.

But ask him about his favorite part of his most recent trip to Virginia Tech this spring, and he doesn't hesitate.

"They have a lot of food there, so I enjoyed that," Ford told The Key Play with a smile during "The Opening" regional camp at Northern Virginia's Centreville HS on Sunday.

Ford says he got to sample some of Blacksburg's culinary options during his April 20 visit to Tech, which he estimates was his fifth trip to campus, even though he's not yet a senior. Clearly, whether it's the food or the rest of the program's amenities, the Hokies have an early start on impressing one of the top backs in the 2019 class.

But this latest trip was all about getting a look at how Justin Fuente and company run a spring practice, and Ford says he enjoyed the chance to "just see how the offense works." In particular, he tried to keep a close eye on exactly how Fuente and offensive coordinator Brad Cornelsen use their running backs, and he could barely keep up with all the possible options.

"They use their running backs a lot of different ways," Ford said. "Out of the backfield, play action, zones, power, everything."

In Fuente's first year, the coaching staff didn't settle on using just one running back in all those different ways. RB Travon McMillian got the most run, but Sam Rogers, Jerod Evans and even Cam Phillips all chipped in to help carry the running load.

Should he become a Hokie, Ford says the Hokies wouldn't need to turn to all those different players to generate a ground game. Instead, RBs coach Zohn Burden, in particular, would prefer to rely just on Ford himself.

"(Burden) just said I have the ability to run all the plays myself, that's why he sees me fitting there," Ford said. "Of course, you have most colleges, they get backs of different varieties and they can do different things. But if they get one back who can do it all, that's pretty good."

The Hokies have a pair of intriguing options joining the squad this season in Terius Wheatley and Jalen Holston, but there's no guarantee either will seize the starting spot by the time Ford might arrive on campus.

But, considering that 247Sports has already rated him a 4-star prospect, Ford could be well-positioned to become Tech's bell-cow back of the future.

Accordingly, Fuente is putting a premium on building a relationship with the young RB, and he seems to have made an early impact.

"Coach Fuente's just a cool man," Ford said. "I can tell from sitting down and talking with him one-on-one, we can have a good conversation. Not even about football, or just about family, everything. It's a good relationship with him."

But the Hokies certainly have plenty of competition for Ford's services — everywhere from Clemson to Ohio State to USC has offered him so far.

Yet, with his recent Tech trip in the rearview, Ford isn't planning on taking any other visits just now. Even with the summer nearing, and all the visits and camps that normally come with that time of year for high-profile recruits, he says has no plans just yet.

He's definitely confident and with the other schools pursuing, justly so. I just hope he sees the rising Tech program and wants to be an integral part of it. Keep after him CJF! work your magic!

I'm really excited that Fuente seems to focus on this caliber of player. As a program that wants to be in the playoff conversation, it's necessary to keep up the constant flow of car puns.

Same here - seems that Fuente has been a nice explorer of talent, and he has quickly realized that he must angle his conversations with these recruits towards competing in the CFB Playoff in the very near future.

Not only has he been a nice Explorer of talent, but wouldn't you say he's also been able to Dodge the bad recruits?

If he can Navigate his way to VT, we will have a Fiesta!

You could say I never had the focus to notice it only pertained to a specific car dealer. Call it a Rookie mistake.

You Shelby sorry you posted that.

Yep. You gotta stay straight down the Fairlane on this one, you can't just Custom around with it to make it fit the joke. Ouch, that even hurt me to say.

2019 could be special. Land and Ford seem to be high on us, for starters. I'm looking forward to see what else we can do in that class.

As far as puns go: I hope we Land a Ford.

We may have permanently burned that bridge with Land. Last I checked, he had named UGA his leader after VT being his dream school and growing up a fan. I'm not so pessimistic that I think we're completely out of it with so much time to go, but I'm not confident, that stupid ass situation with Capehart was no bueno.

that stupid ass situation with Capehart was no bueno.

Did anyone ever figure out what exactly happened there? The last I remember hearing is he told Coach he wouldn't visit another school and then proceeded to do so the following day. As a result, his offer was retracted.

Can anybody confirm how badly the relationship with Bishop Sullivan HS and Coach Scott's players was damaged? It seems like anybody who was coached by Scott (Jahque Alleyne and Tre Hubbard) that was on the team, just happened to leave after the Tahj Capehart incident.

Edit: Not saying these guys left because of what happened, but the timing just seems to make it seem that way.

Yes, but Coach Scott coached him there before he left for Bishop Sullivan.

I know you have demonstrated some solid #sauces in the past, is this info coming from them? I'm already in agreement with this for the most part without any.

As far as puns go: I hope we Land a Ford.

We could switch one of them to Rover.

Would be awesome to have a primary back and not death of the running game by committee...

But you have to admit, it's nice having a stable full of ready replacements.

You know it's easy to forget too that coaching staffs typically begin relationships with blue chip guys like Ford at a very young age. When it came to somebody like Hunter we were fortunate to retain his coordinator, but with offensive guys like Ford most of our offensive coaching staff is just trying to make up for lost time. Recruiting these guys will only get easier the longer Fuente and company are around.

So many jump cuts. Dude gets a crease and its over. That poor safety at 1:40 in the clip. And that other poor safety at 5:26 gets juked so badly that he falls down, gets up, tries to run, and falls down a second time. Is the level of competition that bad, or is he just that good?

Great article. It's going to be a long climb, but I believe Fuente is doing all the right things to set VT on the path of being a national power.

Is is just me, or does he bear a resemblance to a certain former Hokie known as MV7? Must be the earring.