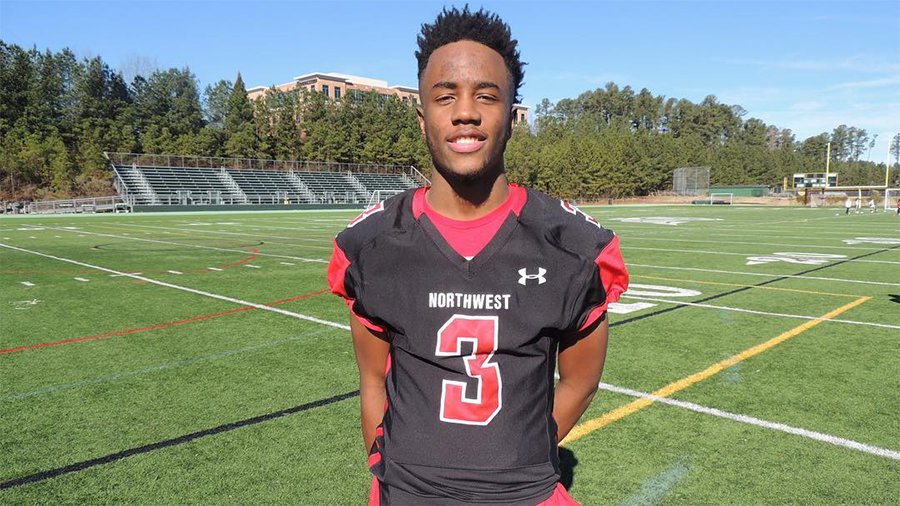 Virginia Tech's recruiting emphasis in North Carolina for the 2018 cycle — the #NC2VT campaign — netted its most highly touted prospect to date. Tre Turner went public with his commitment on , a pledge which had the Hokies jumping for a couple of weeks. Turner joins defensive tackle Joe Kane as the pair of Tar Heel State prospects currently verballed to Tech's '18 class.

"The campus is like no other, it's a different feel than anything I've ever felt," Turner told The Key Play in May. (The same interview includes analysis from Turner's coach, Jared Rolfes, and Turner discusses being pitched as a dual sport athlete.) "Coach Fuente, he has a good thing going with the offense there."

#Hokies are in hot pursuit of 4-star WR Tre Turner. Tre and his head coach, Jared Rolfes, discuss the former's recruitment and where Virginia Tech stands (spoiler: to the top). http://www.thekeyplay.com/virginia-tech-football-recruiting/2017/05/14174/one-nations-top-athlete-prospects-tre-turner-has A post shared by The Key Play (@thekeyplay) on May 5, 2017 at 5:47am PDT

"With as tall as he is, as smooth as he is, with the quick twitch in his hips and his reactions, most of those things you don't see from guys that tall," Northwest Guilford coach Jared Rolfes told The Key Play in May. "He can do what kids at 5'9" or 5'10" can do, speed wise.

"Once he got comfortable, it was just like a rocket ship taking off."

Bottom line, Turner is a marquee playmaker that Justin Fuente and his staff identified and offered (latter in February 2016) early in their Virginia Tech tenures. Along with Darryle Simmons, Turner fills a void as a taller receiver who can thrive split out wide. Furthermore, by securing Turner's pledge in May, the Hokies' efforts to land additional North Carolina recruits throughout the 2018 cycle stand to benefit from a splashy springtime commitment.

The movement of NC to VT just got bigger congrats my guy @treturner_15 pic.twitter.com/AYemOedpaE— The KJ Henry (@ywd_ballislife) May 31, 2017

Gifs and memes can't take away from the fact that they are still securing a lot of their top talent...

Still a lot of time to get some more flips once UNCheat crashes and burns this Fall.

The NCAA is never going to do anything to UNC, don't hold your breath.

No he means when they suck again on the field and Fedora jumps ship likes he wants to.

I find it super ironic that its in the rain

Then they didn't loose this recruit...doesn't count if it rains.

I'm glad someone finally noticed that!

Wait so is UNC Theoden here? Because um.....they wound up winning this battle....

Dude, stop ruining the moment with your thinking and sound logic

D: sorry, I forgot I was on the interwebz! I had a similar line of thinking...
But then I didn't want to be a debbie downer.

I'm glad you were my debbie downer.

It's what I do best

This is exciting, but it's still a long time until signing day.

Yay! Joe can use his commitment write up!

Nice pickup for the Hokies. Keep it going. NC2VT.

Start Jumping Boyz...we're getting there in recruiting too. In Fuente we trust

Considering how often we play ECU....

Good week keeps getting better. Does anybody know how good he is at playing basketball by any chance and was he offered by Buzz at any point? Playing 2 sports in this day and age is virtually impossible, but I'm excited for him.

Big get! Bring your friends, Tre!!!

Walking into the office tomorrow having added a big piece to the puzzle for this class It's a great day to be a HOKIE! #ExitLight18 #NC2VT pic.twitter.com/LGrTwHvvhq— john iezzi (@jni123) May 31, 2017

Even better is the salty UNC fans tweeting at him

Great strategy going after the NC and Penn kids. Hopefully it helps our long term goal of locking down the home state

But I know what you're saying

A taller version of Isaiah Ford with the speed and twitch of a 5'10'' athlete? The receiving corp just got better with Turner on board. Welcome to Hokienation!

So when does the thread discussing ki Henry's shoe preference start?

Also a fantastic basketball player, the long and lean Turner has great body control and leaping ability which makes him an outstanding target in the red zone.

Turner is a hands catcher with after-the-reception wiggle and good speed to get loose on those bubble screens for big plays.

I believe the moment Turner walks in the door in Blacksburg he'll be one of the most talented receivers in the room (although the buzz out of Blacksburg is strong regarding red-shirt freshman Phil Patterson along with Farley), joining a group that will all be back from the 2017 season minus Cam Phillips and graduate transfer James Clark. Look for Turner and another North Carolina product in freshman-to-be tight end Drake Deiuliis to become two of the more dynamic players in the ACC.

Justin Fuente and his staff are putting together a nice blend of talent in the passing game as Kalil Pimpleton and Sean Savoy are two others I expect to put up numbers during their time in Blacksburg, same thing with Ball State transfer Damon Hazleton who has to sit out this fall because of NCAA transfer rules.

As a junior Turner caught 52 passes for 1,065 yards and 12 touchdowns. He's a two-way playmaker that broke up eight passes on defense.

Wiltfong is 247's Director of Recruiting and for him to be so high on Turner, but more importantly, our young receiving corps as a whole is exciting. He says Turner will instantly compete with Caleb Farley who he calls our "soon-to-be crown jewel."

Sounds like Turner will be enrolling early, doing spring practice with the team, playing football in the fall and then will be a preferred walk-on for Buzz.

With Turner and Simmons our WR recruiting class is obviously going to be solid. Does any body have a read on how these commitments might affect our standing with Spalding and Mitchell? If we could land one of those two guys this class of pass catchers would be pretty incredible.

Mitchell is being recruited as a TE. I think we will continue to pursue him and Kyle Pitts as well. As far as WR goes, we still be after Daniel George hard. I'm not sure how hard we will pursue Spalding, but if George goes elsewhere then we could ramp up the efforts for his services.

Spoke with a friend immediately after Turner's commitment, and he thinks that the only WR that they're going to pursue is George. Don't think Spalding or anyone other than George will have a spot.

Man, I hope that's not true, I am a big fan of Spalding. I would be pumped about George as well, but I'm not confident we land him. I think Spalding has a big upside as a complete receiver and seems like if we pursue him we have a chance to land him.

Anyone know the chances of getting Daniel George? It seems like PSU is the heavy favorite.

I just watched his highlights....WOW

He likes us a lot and we're in it more than the cb's and common opinion would indicate, but I'd still consider PSU the favorite with a decent, but not sizable lead. It'll either be PSU or VT.

On the PSU note, how many OTs are they taking this year? Because it seems like we're head to head on all our targets and they've got 3 of them and look to beat us on Bradley and Walker too.

Good lord does that team run enough bubble screens? More surprisingly is how it continues to work time and time again. The kid does oddly look like a more athletic version of Isaiah Ford

Fuente and company in NC...

What a great pull

yeah, but what is his right hand doing?

I believe the kids call that "goosing".

You can see the equal but opposite reaction of the hands going up and the testes are pulled down.

Anyone else getting tired of the same 5 to 10 gifs of Emma? I know this is blasphemy so excuse me while I...

If they're a replacement for Emma, I'd want there to be less facial hair.

Says the person who wanted to replace Emma with a bearded pirate.