Virginia Tech seeks to add a 4-star DB to its 2018 recruiting class. 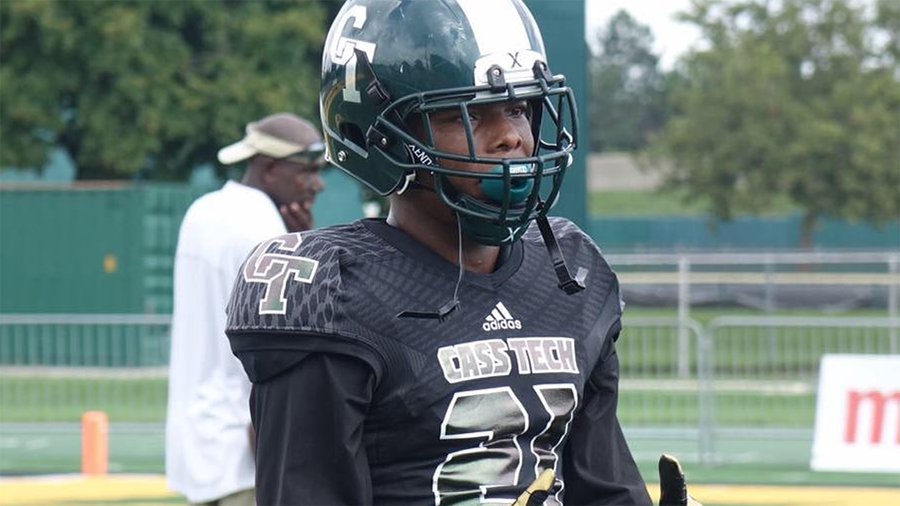 Great players have become a hallmark of the Detroit program. But while Wilcher won't classify any of his pupils as stars, he certainly recognizes talent when he sees it.

And he knows cornerback Kalon Gervin falls under that category.

"He's not going to be the type of kid who says, 'Coach, coach, coach, I know this is supposed to be happening.' No, he's knows it's going to come."

Gervin holds scholarship offers from close to 40 major Division I schools. He committed to Notre Dame in mid-February. Perhaps that patience surfaced when he decommitted in May.

"Like I told everyone else, I've got to do what's best for me right now," Gervin said.

The 5-foot-11, 180-pound defensive back has no timetable for his decision. He doesn't have a public list of schools that's whittled down.

"It's all about who really wants me and who's going to offer the best education," he said before adding he'd like to study communications.

The 247Sports Composite lists Gervin as the No. 22 athlete in the country and a 4-star prospect. He's a speed demon, evidenced by his 4.41 40-yard dash.

Wilcher knows what that attribute means. The head coach of 19 years played running back at Michigan in the mid-80s and was drafted in the ninth round of the NFL Draft by San Diego.

"I think he can adapt to (college ball) and be ready for it because No. 1, he has great speed and quickness, that's two things you can't teach," Wilcher said. "You can improve it, but you have to have it.

"Yeah, I went down there, took a visit, talked to the coaches, the head man, the (defensive coordinator), all that," he recalled. "It was nice, really nice. What stood out to me was how cool they were at practice."

The Hokies offered him on that visit, although Gervin knew they had a scholarship with his name on it all along. And despite Detroit's distance from Blacksburg, Gervin's well aware of Tech's program. He said location is not a primary factor in his recruitment.

What could be a piece of the puzzle comes in Gervin's relationship with one of defensive coordinator Bud Foster's assistants.

"I've really developed a close relationship with their cornerbacks' coach, Brian Mitchell, since back when he was West Virginia," Gervin said. "He's a really cool guy, he keeps it real. That's my man."

Hunter's decision has become a theme among a few of the top athletes on Tech's radar.

"He's a good cat, that was a big deal," Gervin said. "That's real big, I was paying attention to that."

The Michigan native would prefer a situation where, like Hunter, he's afforded an opportunity to possibly play as a freshman and work his way into the starting lineup.

That's along the lines of what the Hokies' staff told him.

"They just want me to come in, they said they need me to come in and play right away, maybe even start," he recalled.

He's equipped for that opportunity. Few, if any, passes were completed on Gervin last season. He worked against Donovan Peoples-Jones each day in practice.

The 247Sports Composite tabbed Peoples-Jones as the nation's top receiver last cycle. He enrolled at Michigan in January.

"I lock in, hone in on my technique," Gervin explained. "That's really important when you lock down a side of the field ... I practiced against the No. 1 receiver in the country for a while.

It just showed me that matching up great people like that is great practice. The profile of the top player in the country, it gives you a lot of confidence."

Peoples-Jones' recruitment also included Tech. Wilcher grew familiar with their new staff through their courting of his wideout.

"They've been coming here for a while," the coach said. "I definitely think it's a great school, great atmosphere, great college town. I would love to see kids go that way and prosper."

Wilcher's built a type of iron-sharpens-iron mentality that pours through the Cass Tech program. Last summer, Lewis spoke to the same sentiment to the Detroit Free Press as a reason for his success in Ann Arbor.

"Cass Tech is a factory," Lewis told the Free Press' Perry A. Farrell. "It is just like a college program. We go out there and compete against the whole country. We travel and we do different things and we compete. We compete in practice. That's something I can see that has transcended to the college game; the competition in practice.

"We had so much skill on the team, it was never a lax day at practice. We always had to compete.

That's what I brought from Cass Tech, that competitive spirit. You can see all of our guys are being successful right now."

Gervin could be next off the line.

This interview reads like Gervin and that school are at a whole different recruiting level. Feels like a level up from where we have been. I like it.

With permission (or without, actually) from all concerned, I have decided that for this week, and this week only, Dallas Baptist University can lay claim to DBU for eliminating loluva from the big baseball dance. thanks!!

We should feel good here, he loves VT and the staff. I'd say it's currently an OU/VT battle with VT having a slight lead. The thing to watch out for, however, is if OSU comes calling. I think he goes there if he gets an offer, but goes to VT if he does not.

After picking up that FL kid last week they should get Campbell. If they pull Cook too we should be in the clear. They can't take that many after taking 5 last year right?

I don't see them taking a ton of guys but you never know in recruiting. OSU has a propensity for holding out offers until the week before NSD and flipping kids once they realize they'll miss out on a top target. Last year they offered a WR from Texas on Jan. 30th and he signed his LOI the next day.

Even if Gervin commits to the good guys early on, we likely won't know how this plays out until January or February (yes I know that's true of all recruits).

Seeing our offers list, and comparing to what we currently have on the roster.

Man, our secondary could take it to another level in the near future, which is saying something.

Seems like a quality guy that would benefit the program.
Would also create more momentum for us.

Whether we get him or not, I really enjoying seeing VT being in the discussion for these young men. For me, the jury is no longer out on whether Fuente and staff can recruit. My only remaining question is how well can we evaluate/coach the O-line position, and that takes a little more time to answer than for positions who see the field quicker.

When it comes to the OL, I prefer Vice to Nice. I really enjoying seeing VT being in the discussion for these young men. For me, the jury is no longer out on whether Fuente and staff can recruit

We've always been in the discussion. Closing the the only proof. Fuente clearly has an ability to evaluate talent, but he's going to need to supplement that with closing on guys that aren't flying under the radar if he wants to elevate our recruiting.

I would disagree that we have always been in the discussion for high profile recruits from Detroit, or many if the other areas we are getting recruits from. No one closes on everyone, but we did well closing last year, with limited time to develop relationships, and are getting guys again this year. As I said "for me the jury is in". Hopefully he will be around long enough you can leave it out longer if you need to.

100% agree with you. When all the talk about how the "CUSA" coaches were not going to be recruiters at the level we needed, I thought it was way too much concern considering we have been missing our top targets at many positions for quite a while. BUT, I was still uneasy as I thought it would take a lot of winning to gain that credibility....
Now it's clear that Fuente & staff are recruiting at a higher level already, than we have been before he got here. It's not just the uptick in class rankings, but the ability to land top targets even when they are 3-stars sometimes. Quincy Patterson is a great example of finding someone early and landing the commitment from a Chicago kid, big time Colorado kid, Michigan kid(s?) and the massive early success in the #NC2VT campaign is huuuge. Jerod Evans being Fuente's first commitment said a lot to me but the continuing trend makes it much more apparent. 10-wins, winning the Coastal, taking Clemson to the final minutes, and the bowl win over an SEC team certainly sparked things for recruits as winning always does. But the fact that we are evaluating so well on offense and loading up QB talent (that FITS) is why I see this continuing. We know what Bud did with the 6-7th best classes in the ACC but solidifying VT at 4th (FSU, Clem, Miami, VT) repeatedly is going to show on the field by itself. Combine that with this offense and I am beyond pleased with the direction of the program....

I'm just happy we can land a big time QB without A: family connections (Vick bros, Josh Jackson) or B: hiring the guy's HS coach. I don't think this has happened since Tyrod.

I never understood the worry. There was little reason to think that the new coaches wouldn't recruit at a level similar to the previous staffs -- and probably a little better initially due to the shiny new car effect.

VT has become the Hunter in a lot of these recruiting battles. I like it.

I see what you did there and I like it

Unless OSU offers - and they might not given the talent they have accrued the last two cycles and who they lead for this cycle - I've got him picking the good guys, perhaps sooner rather than later.

Do you have any reason to believe that or is this just conjecture? Your statement comes off as if you have insider info.

He has balls the size of Bayonne. That's qualification enough.

And that, of course, is what she said.

Hell yes ! The amount of stud recruits this cycle that are showing legit interest is making this offseason interesting. This class may be a great one

If - and it's a still-sizable "if" - it's looking like a 2-horse race, today's news out of Norman could be huge.

Also, our Horse is On A Treadmill.

Also, our Horse is On A Treadmill.

Doesn't that hurt our chances?

Maybe. I signed up for a username at LandThieves yesterday but had a typo in my name. I'm posting as HoreOnATreadmill. Doesn't bode well for anyone

Maybe, but JohnOnATreadmill is reading your posts with interest.

I can't help but wonder how PimpOnAStairClimber feels about all this.

I believe that's "are", and at least they are physically fit

psh, you just say that because it's 4 different conferences across 5 different geographic regions /s

As a side note, Oregon is considering the uniform design for a game next year.

The VT logo is the highest and he is leading with his right leg (with the VT pants), so I feel good about our chances here......

BUT it is also the only logo that doesnt match with the other 4 in the green-red color scheme. Ergo its obvious the others are only ploys...