The Hokies recently picked up a commitment from a a 6'3" cornerback. 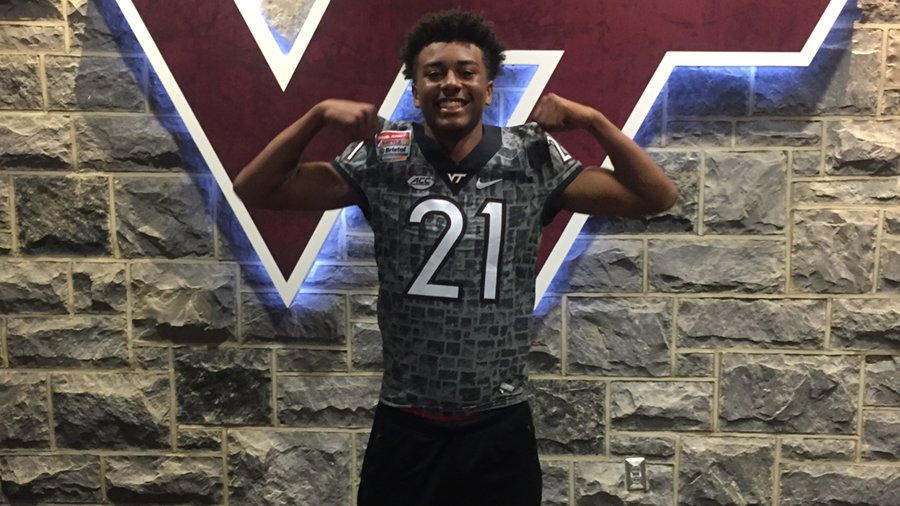 Braxton Clark made his move quickly.

"He was happy," Clark laughed. "He was like, 'I'm real turnt man, excited about it,' He was just real excited. All the coaches were. They were just as excited as I was. It felt good."

Tech had just offered Clark on May 29 during the aforementioned trip to Blacksburg. Both the Hokies and Clark must have approved of what they saw in person.

"Talking to my coaches, and my family, and then the coaches there, it felt like a good fit," said Clark. "I fit the scheme really well. They like corners like me, that are long and rangy. They really know how to develop players. I feel like it was the right move."

Clark fits the mold of a lockdown corner that can match the size and speed of the receivers opposite him.

"He just covers," as Dr. Phillips head coach Rodney Wells put it. "He's long at 6-3, can't get the ball around him. Has really good speed, he's probably a 4.5, 40 kid. He's just what everybody's looking for.

"Everybody we play, even at the high school level, they have all these receivers, 4.4 receivers, some 6-2, 6-3, got these big guys catching the ball. A lot of people want big guys covering, and that's what Braxton specializes in."

Wells — a one-time Tech commit himself who ultimately signed with Syracuse (1997-2001) and kept in touch with Bud Foster — tasks Clark each game to utilize his expertise and trail the best receiver on the field.

Tech will gladly add the 247Sports Composite ranked 3-star's skillset to its 2018 class. Replenishing depth at corner is a priority for the Hokies this cycle. Starters Greg Stroman and Brandon Facyson exhaust their eligibility after the 2017 season. Junior Adonis Alexander — another long-frame CB — has been mentioned in the early rounds of various 2018 NFL mock drafts. Redshirt freshman Tyree Rodgers, '17 signee Bryce Watts, and early enrollee Caleb Farley round out the notable reserves. Although, Farley is poised to breakout at wideout in Justin Fuente's offense.

Even with the opportunity for early playing time, Clark acknowledges room for improvement.

"I think I need to improve on a lot," Clark said. "Everything I can improve on. My man coverage, press, and then playing more instinctive. Just reading and reacting, not thinking as much; run support, coming up, just knocking people out."

Yet, as more repetitions come and Clark increases his knowledge of the game, Wells knows what his pupil's ceiling is at Virginia Tech.

"I told coach Foster, he's going to be one of the top guys in college football in two to three years," Wells said. "And he is."

6'3 and can run a 4.5? Seems strange that he in only a 3* recruiticorn then. Just under the radar perhaps? Regardless welcome aboard!

The 4.5 40 is what his coach claims. His recruiting page has no time listed so he probably never attended any camps to be timed by any recruiting service scouts.

As an aside, between Scott and Foster, the sense I got after talking with Wells is Tech is positioned very well at Dr. Phillips. That's a good thing because it's a premier program in Florida.

I am so old, I can remember VT recruiting Coach Wells.

GET OFF OF YOUR LAWN!

At least Coach Wells did not have hundreds of tweets from the Hokie non-TKP community letting him know Bud was wrong, we do not like him or respect his opinion. There are dividends to being a class act.

He told me he ultimately opted for 'Cuse because he didn't want it to seem like he was going to Tech to follow Ike Charlton. He wanted to do his own thing. That's the thing about recruiting, every kid and scenario is different. Tech is hauling in a bunch of tight-knit 336 players because they're close. However, Wells signed at 'Cuse for the exact opposite reason.

In the crazy things you remember for no good reason... There was a guy from Florida around that time who picked Syracuse over VT and said the reason was that Syracuse had private dorms, meaning he wouldn't have a roommate. I thought it was Wells. Sad that my brain would retain such utterly useless knowledge.

Considering how those seasons ended up for Tech vs Syracuse, respectively, I wonder how much (if any) he regrets that decision, especially if he still has as good a relationship with our coaches that he does.

I'm still sad no one acknowledged my Montavious Pitts reference in the Kyle Pitts thread. I mean, since we're talking about former VT verbals who went elsewhere.

Clearly, Coach Wells did more with his life, but I remember the decommit stinging badly at the time.

No one acknowledged your reference? That's really *puts on sunglasses* the pitts

I love it when you talk dirty to me.

Special love for this commit, as I, similarly, am real turnt.

Careful with that. I've heard that's how things get lit, fam