The Hokies kicked off its 2019 recruiting class with a two-way, in-state prospect. 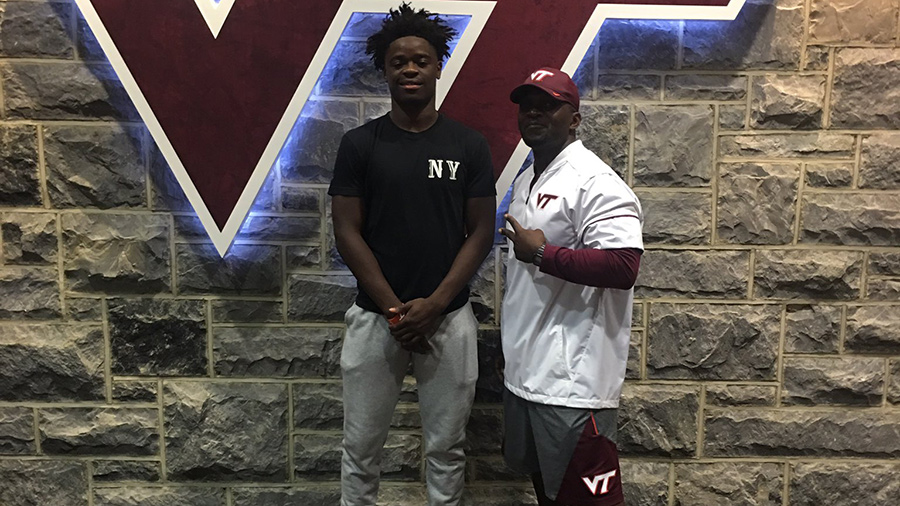 Virginia Tech secured its first verbal commitment of the 2019 recruiting cycle on Sunday. Athlete (wide receiver / defensive back) Jahad Carter opted for the Hokies over an offer from Temple.

I am proud to say I am verbally committed to the University Of Virginia Tech #GoHokies pic.twitter.com/4I3UsKjUYm— Jahad Carter (@JayAlmighty6) September 24, 2017

"I verbally committed to Virginia Tech because I have a good bond with coach Fuente and the coaches there," Carter told Rivals. "I felt at home there on campus and my parents felt comfortable with me going there."

The 6-2, 185 pound Henrico HS (Richmond) product is unranked by 247Sports and holds a 2-star evaluation from Rivals, but Tech offered Carter in June after Hokies' coaches watched him workout at a satellite camp.

"On Monday, I attended the Virginia Tech camp at Randolph Macon College and I was focused and ready to do my best. I was able to run great routes and play great defense. The coaches stated that they loved my energy, size, athleticism and my ability to play on either side of the ball," Carter explained.

"On Tuesday (June 6) Coach Galen Scott, the safeties coach, called Coach Glasco (Henrico's head football coach) and extended me my second offer. To get an offer from Virginia Tech, an ACC school, is a blessing. This is a huge offer for me and to be offered by a school in Virginia has always been my dream."

Regardless of rankings, Tech immediately offered after an in-camp evaluation. He's seemingly a priority for the Hokies.

"Jahad is an outstanding talent," Glasco said. "A rare blend of size and speed. I believe he can be a two-way player in college in the right program. Off the field he leads his teammates by example. Works hard and he wants to be the best period in the 2019 class. It's my job to make sure he is."

Coach Glasco stated: "Jahad is a great athlete that can play on either side of the ball. Jahad is a special player and if he masters the defensive side of the ball, I could see him being an All-American in College. He is probably one of the best receivers in the state of Virginia."

welcome to Hokieland....may you break and surpass all receiver records

All the blocking highlights!!!!!

My wife teaches this guy at Henrico, she says he's a really great kid in class. I got to watch him at a game this past Friday, he blocks about forty yards down field on every play. Great get for the Hokies.

That's the kind of endorsement I love to read!

This guy plays against good talent at Henrico High school. I can only assume with his frame at such a young age that he will bulk up easily. Looks like a great pick up for VT.

Very nice to see hard work pay off for a guy, who by everything we hear, is a good kid. That had to be exciting to get that offer after the camp.