After Scouting CB Mike Sainristil on a Trip Up to BC, Hokies Nab Fourth 2019 Commitment

Virginia Tech went a bit outside their normal recruiting footprint to land the Massachusetts athlete. 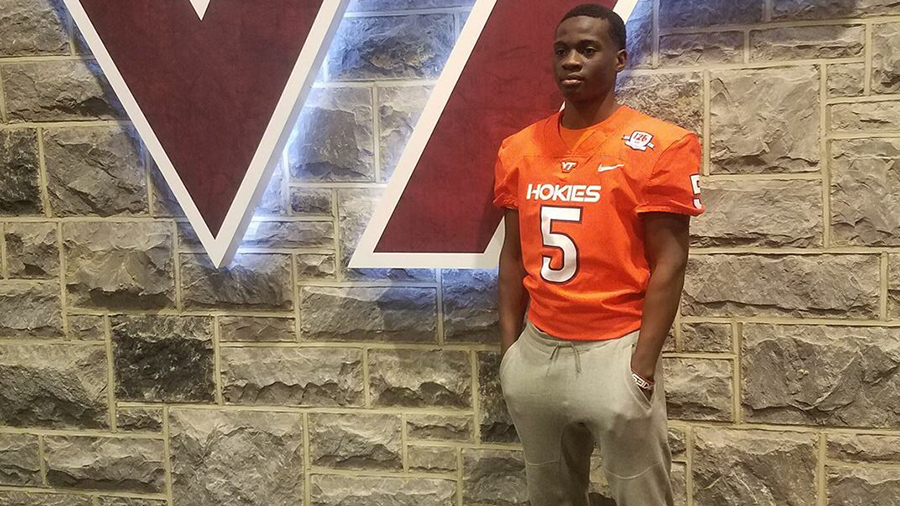 2019 CB Mike Sainristil picked an excellent time to have a good game back on Oct. 6.

Playing up in Massachusetts at Everett HS, Sainristil is ordinarily a bit out of the way for the Hokies. But with a match-up against Boston College set for the next day, safeties coach Galen Scott decided to stop by and see Sainristil for himself.

"He talked to a couple of us before the game, and my coach told me he was going to offer me, I just had to play well," Sainristil told The Key Play. "And I had a good game, I got the offer. And ever since the offer, we just had a good connection, building up a player-coach relationship."

It would prove to be quite the fateful evening for all involved. A few months after Scott rewarded Sainristil's fortuitous evening with an offer, the talented junior decided to pull the trigger and pick the Hokies on Feb. 9, choosing Tech over offers from programs like Michigan, Wisconsin and Ole Miss.

"I've talked with my mom, she said she liked it, and I really like it myself," said Sainristil, who's rated a 3-star prospect by the 247Sports Composite ranking. "My coach says it's a good place for me, in his opinion. The support behind my choice just shows me that if this is really what I want, it's what's best for me."

Indeed, Sainristil says his family and coaches got a chance to see Blacksburg last month, when he made the trek down for a visit late last month.

"They treated us well, showed us around the football facilities," Sainristil said. "They told us about the academics and I just felt like it was a place I could fit in very well and I see myself there."

Sainristil says he got to visit briefly with Justin Fuente in his office, but he spent the bulk of his time on the trip with Scott, the assistant who emerged as his primary recruiter soon after he earned the offer from Tech in the fall.

When it came time to get down to brass tacks, Sainristil says Scott had plenty to say about what he sees in the rising senior's game, whether it be at cornerback or wide receiver for the 5'10", 175-pound athlete.

"They told me because of the way I play I could play on either side of the ball," Sainristil said. "They play with sometimes an extra defensive back on defense, they use their slots a lot, which is what I play, and that's what I'm used to doing, so I could fit in and help out in those aspects of the game."

Sainristil says he plays on both sides of the ball these days, so he's comfortable no matter where the Hokies might put him. But he admits that Tech's tradition of sending defensive backs to the NFL also weighed heavily on his decision, and it wouldn't hurt his feelings to end up in the secondary.

"I know they've produced many guys and put a lot of players into the draft, so I know if I go there and handle my business, get through my academics and then do [well] on the field, I could reach the next level after college," Sainristil said.

Yet Sainristil has plenty of time left before he even gets on campus, let alone before he starts thinking about the league, considering how early he made his college choice.

He says he plans to keep in close contact with Scott and even Tech's newest assistant, executive director of player development Adam Lechtenberg, in the meantime. But he's also scheduling another trip to Blacksburg, likely sometime this April, so he can get to know the rest of the staff a bit better.

"I know I'm gonna go down for an official visit soon, so I'll be around [Fuente] more, Coach Scott and some of the other coaches and players," Sainristil said. "So through that I'll become more comfortable with everyone."

Dude looks like a baller on tape. I don't care what his rating is, he's got game and I'm excited to see what he can do!

Idk if Massachusetts has much talent as a state, but I like his offer list and the fact that we're on top.

MA is not known as a football state, but his high school (Everett) plays at the top level and is the defending state champs in D1.

To add to Cape Hokie's comment. Everett is a force for High School Football, they have been dominant for a very long time.

I love his defensive highlights hes instinctive as all get up and has great ball skills.

Someone give me the hooked on phonics pronunciation of his name

Edit: But really tho

I think it's Seenrussell but that's just my guess

Ain't a thing brotha, I got you.

Looks line a leader and an alpha-dog on a championship team. This young man reminds me of Greg Stroman, and I can't wait for him to do great Stroman-like things.

He says he plans to keep in close contact with Scott and even Tech's newest assistant, executive director of player development Adam Lechtenberg

In all seriousness, dude looks a stud. My reading comprehension is not on par today.. is he saying he'd be a slot CB, or just that he's a slot receiver currently when on offense?

I read it as Slot CB

That's what I was thinking, but then I saw a lot of video with him as a slot WR, so I wasn't sure. Either way, glad to have him aboard!

"They told me because of the way I play I could play on either side of the ball," Sainristil said. "They play with sometimes an extra defensive back on defense, they use their slots a lot, which is what I play, and that's what I'm used to doing, so I could fit in and help out in those aspects of the game."

Nice film. Can cut on a dime, very good hip transition and instincts. Reminds me of another recent #5- Cam Phillips.

Yep. Great acceleration and balance too.

I like this kid. I hope he sticks with Tech