The Hokies are hoping to keep one of the top prospects in the country in Virginia. 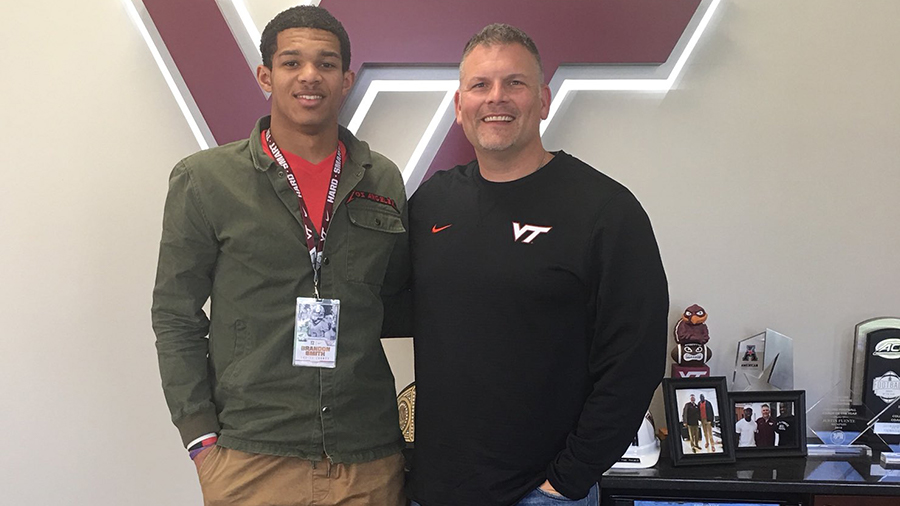 Back when the Hokies offered Brandon Smith in April 2017, the then-sophomore already boasted an impressive frame at 6'3" and 210 pounds.

The Mineral, Va. standout played mostly defensive end at Louisa County HS, and even a year ago, he impressed Justin Fuente enough to earn an in-person offer at a spring practice.

By the time he returned to Blacksburg for a second spring visit on March 17, Smith had grown extra two inches and added five more pounds. All of a sudden, he says Bud Foster started envisioning him filling some very big shoes at a slightly different position.

"He sees me kind of with the measurements of Tremaine Edmunds," Smith told The Key Play. "As far as play style, he's excited to see just how much I'll develop when I get to the next level."

Given the youngest Edmunds' status as a potential first-round draft pick, Smith says that sort of comparison blew him away. But, plainly, Foster is not alone in his assessment of Smith's potential, particularly with another year to develop.

Though Smith started his recruitment as a relatively unheralded player from a Central Virginia school not typically known for producing top prospects, he's since become one of the top recruits in the country. Not only is he rated a 5-star recruit by the 247Sports Composite, but that ranking has dubbed Smith the top player in Virginia and the 19th best player in the entire country for 2019.

The Hokies were just the second team to offer Smith (close on the heels of UVA, coincidentally enough), and he plainly hasn't forgotten Tech's early interest. Since earning his offer last spring, Smith says he's visited Blacksburg several times as he considers whether to stick with the in-state power or look at one of his 28 offers around the country.

This time around, Smith says he didn't have much competition for attention, with just "seven or 10" other recruits on campus. That gave him more of a chance to spend some quality time talking about Virginia Tech's academics, not to mention with Fuente and Foster.

"I enjoyed the trip, got a chance to sit in with the players in a few of the meetings and just got a chance to see live practice," Smith said. "And I got to talk with some academic people... that was the only thing that was really different from my other trips."

Naturally, he spent some one-on-one time with Fuente, and he remains impressed with the head Hokie's passion.

But Smith says his main tour guide for the trip was Foster, who spoke with "throughout the day."

He also got a chance to watch Tech's "fast paced" first spring practice, so he kept a close eye on the man who could become his defensive coordinator (and even position coach) someday. Despite Foster's gruff demeanor, Smith says he was surprised to find that Foster wasn't prone to any histrionics on the practice field.

"He didn't do a lot of yelling; just teaching, really," Smith said. "I just took in how they were using their time, and what drills were they doing the whole time."

With his return trip to Tech already fading in the rearview, Smith says he's now planning to embark on ambitious swing through Big Ten country. For his spring break in the first week of April, he's hoping to visit Michigan, Notre Dame, Ohio State and Penn State, all in one fell swoop. Then, on April 19, he expects to take an official visit to Texas A&M.

After that, however, Smith isn't sure what his future might bring. He says he doesn't have any set dates for cutting down his list of top schools — he also has offers from Alabama, Auburn, Clemson, Florida, Florida State, Georgia and USC to consider, after all — nor does he have any timetable for making a decision.

"I've got to talk with my parents, mentors, people like that," Smith said.

But Smith did say he was interested in getting back to Tech, and the Hokies seem more than willing to welcome him back any time.

"They were just saying, 'Let us know when you feel like you want to come back and we'll definitely arrange something for you,'" Smith said.

I almost got excited about this kid. But then I remembered I'm a hokie fan and this story has played out so many times. Best of luck at Bama/FSU/anOSU/[insert blueblood here]

If we start seeing some benefits from our recent recruiting class, the tides could change. If anything we are a more exciting program now because of the flashy offense that goes along with the stellar defensive reputation.

I've been in Mineral the last two weeks at the nuclear power plant; I should pay this guy a recruiting visit!!! Oh wait, I'm a nobody... Nice checkup on him though, really hope we can land him.

God help us if a recruit ever says he went to a school because the fans tweeted at him the most.

Sounds like a great variation on the "Come at me bro" t-shirts!!

Just drop a brown paper bag filled with Hardee's BOGO coupons bound by orange and maroon rubber bands on his doorstep before you leave town.

Did any other team send a guy to keep the nuclear power plant from melting down?

He actually wants to study Nuclear Engineering, so this actually would be a good idea!

Shit so Navy or GT.

Or Tennessee if they offer.

I used to have a Nuke Eng PSU grad working for me, so there's that.

That being said, You gotta be pretty damn smart to be a nuke eng in the first place, so I don't know how that mixes with football schedule. You can get away with civil or industrial or one of the easier disciplines, but once you get into EE, CPE, ME, Aero, or Nuke, then you are talking about some serious study time.

And yes, I was BSCE from VT, so don't get your panties in a wad or your feeling hurt.

but once you get into EE, CPE, ME, Aero, or Nuke, then you are talking about some serious study time.

My friends dad was civil in the 80s and they tossed a soda machine out the window of Pritchard.

VT cracked down on that after '87, when most of the Pritchard upper floor study hall furniture got tossed out of the windows for a Halloween bonfire on the prairie. Lots of suspensions and vastly improved police response times followed. They even cracked down on shooting bottle rockets back and forth at each other's dorms.

No love for us chemical boys?

Was at VT on Thursday with my son for a college visit and we went to the Engineering school presentation. Hour long discussion by two seniors who went over all 13 disciplines.

Dang! In the course of both my IE degrees, I never took that course. Took thermodynamics and dynamics though, easy A's.

Probably the most egregious example of recruiting violations possible

Just make sure you show up to his commitment announcement, and jump on stage to celebrate with him and his family when he picks VT.

5star out of Louisa! There are some very proud Louisa family members out there.

I remember back in like 06 or 07 range they had a really good team out of nowhere and that place went bizerk. My coach would call me up to his desk in class and say "watch this shit, they're nuts!" Like live tigers and parachuters on VaPreps lol we were thoroughly impressed.

Played against them my senior year, '07 - can confirm that team was insane. It was the last game of the year and everyone on our team quit except 14 of us a few days before. Things did not go well. Live *lion and fireworks for pregame show.

You had me at "the next Tremaine Edmunds"

"I got to talk with some academic people... that was the only thing that was really different from my other trips."

Not saying that this, of all things, is gonna sway our latest 'crooticorn, but it is such a good look - for VT in arranging it, for Smith in mentioning it as a facet of his trip that is unique to The Good Guys.

Hopefully his Midwest Swing visits all bleed together and no one stands out. I won't be holding my breath on his decision, but this staff is putting in work, y'all. It's gonna pay off.

Having QP in the works as a student-athlete can't hurt either.

Hopefully this isn't a "they really only need two or three more play makers to start contending and they talked about how I could start that....but I'm not going to....I'm going X school with a long list of 4-5* already ahead of me on the depth chart..."

I hope he does commit to the good guys. Great recruit and keeps him in state which is big I think.

Man its hard not to get excited about a guy who has Tremaine like size and from just up the road. Hopefully the timing is right and he see's a Top 10 draft pick who he could replicate along with a Hokies 10 win season.

Maine should take him to the draft with him

Remember when Joe started this thread asking what's better for the program, Tremaine going first round in the draft this year, or coming back in 2018? If we land this kid, in part because he saw how successful Tremaine was in Bud's system, then Tremaine leaving early was probably a net positive.

Maybe it's just me... but the recruiting process is already creepy enough without framing what our coaches are doing as "woo-ing" young boys/men.

Yak butter is a staple food and trade item for herding communities in south Central Asia and the Tibetan Plateau.

is pretty much global?

Had a husky mix dog who ate a pound and a half of butter he snagged from the counter, wrapper and all. I can tell you that he yakked butter all over the floor and the only trade considered was me trading him in for a pet rock.

.... and its devastating the grub worm population!

As long as they don't have sleepovers like Harbaugh

he also has offers from Alabama, Auburn, Clemson, Florida, Florida State, Georgia and USC to consider, after all

He definitely looks like Tremaine! I love the way he takes angles and attacks like a missile against running backs. He also pursues laterally with good angles and weaves through offenses opposition. Can't wait, he needs to be a Hokie!!!

Seems like nobody can lay a hand on him when he blitzes and he can definitely lay the wood. Also trys to strip the ball a little too much but those special teams highlights...good god. He would have Beams drooling.