A rare combo of size and speed, Lanell Carr has that "twitch" the Hokies love. 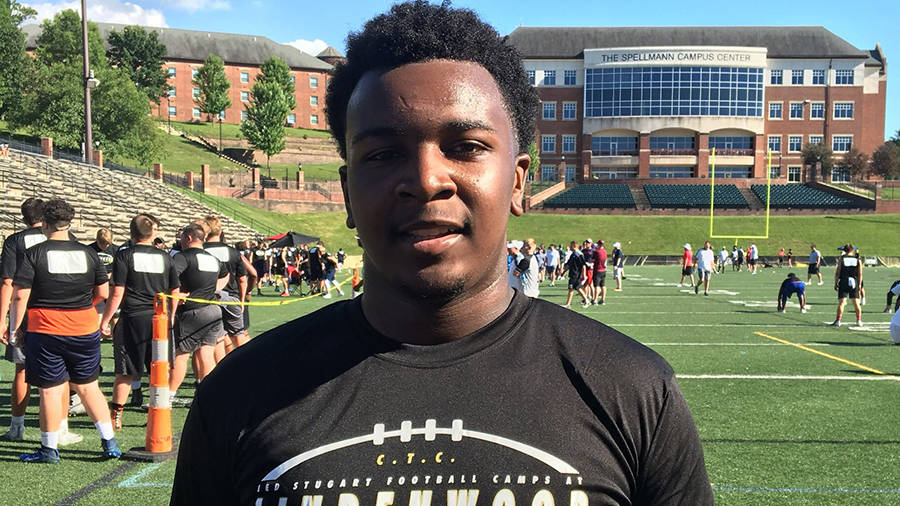 No Hokies coach had been to a game of his, let alone met him in person. Blacksburg to St. Louis isn't a regularly traveled route on the recruiting trail.

DeSmet head coach Robert Steeples helped forge that link between Virginia Tech and the Midwest. Steeples played cornerback at Memphis under Justin Fuente after transferring from Missouri in 2013, and had a stint in the NFL with the Vikings and Cowboys.

"I'm familiar with Fuente and his staff so I sent the film of some of our guys," said Steeples. "They were really impressed with Lanell and his size and quickness."

Carr is a 6'3", 230lbs. OLB/DE. He's rated as a three star (0.8628) outside linebacker in the class of 2020 by the 247Sports Composite, ranking him as the 12th highest rated player in the state of Missouri. Carr says he plans on attending The Opening camp by Nike and the Jed Stugart "Mega Camp", a showcase held for St. Louis region players at Lindenwood University.

Carr's quickness from the edge really pops. It inspired Allen Trieu from 247Sports to use Charley Wile's favorite phrase, "a pass-rusher with twitch". He plays mostly on the edge for DeSmet, but Carr sees himself as a hybrid player.

"I'm really like a linebacker, so when I was playing as a DE I had a big advantage because I can play out in the open space and cover slots, so I was just faster than most of the linemen," said Carr. "And I got good get-off, I'm very explosive."

Steeples attributes some of that quick movement to Carr's time as an AAU basketball player.

Outside of his rare of combination of size and athleticism, Carr plays the edge position with an exceptional amount of discipline. He uses that speed to set the edge before he goes in to make the tackle, allowing the linebackers to shadow the run and make the play.

Virginia Tech joined Iowa, Iowa State, Kentucky, and others offering Carr. Iowa, Carr says, has offered him as a DE. However, Tech, and some others, never specified a position.

The Hokies have a history of utilizing hybrid linebackers, and Carr can be the next in line.

"When I was talking to the coach he was saying how I'm perfect for the defense," said Carr. "I was watching a game of theirs and the [defensive ends], they would rotate them with the outside linebackers. But say I commit there, I would say they wouldn't have to rotate me out, because I can play linebacker, I can rush, and I can cover."

Hybrid box defenders are becoming increasingly important in Bud Foster's defensive scheme. In addition to having a hand on the ground at the line of scrimmage, Tech defensive ends often flex out and align wide to the flat in a two-point stance to place in space, combat a potential RPO screen, and zone cover.

Carr's recruiting process has begun in earnest, and with some major camps and his senior season approaching, expect his list of offers to increase. Carr is slated to visit Blacksburg during his spring break, between March 18-22.

"I'm looking for a school that will help me with my major, I want to major in business and communications," said Carr. "Yeah, academics first. I also want to go to a school where my mom won't have to worry that I'm in danger or nothing, just a school that's basically another home."

If Bud likes him for his scheme I am sold

Not to take away from the first clip but I think there are 3 other defenders on the field that were going to pick that pass...

Agreed, it wasn't the best ball or decision, but I thought it highlighted his length and athleticism. He made a very solid play to reach out and get that thing.

For sure, great read on the qb to sink back in his zone and be the one to come up with the pick.

I mean, all of his requirements and the way he plays the game seem to indicate he would fit in Blacksburg like a puzzle piece

We need him to really drive the team and future threads forward. The lack of vehicle puns has really left us in neutral over the past year.

Not only is he a Carr, but a hybrid Carr!

He's got great efficiency. Never let's off the gas. Really has a new type of motor that will revolutionize the game. Runs exclusively on ethanol and corn.

Carrpe Carr. Am I doing this right?

Are you saying the Carr as a real motor, constantly running?

so he won't get gassed quickly/often?

Not the usual MO for Tech to offer a kid sight unseen. Anything special here Sam?

Based on what I read in the article, the high school coach who played for Fuente vouched for him.

Sometimes you guys don't put everything into articles didn't know if Sam had more insight.

Could the lead to a new avenue of recruits from a region we have ignored in the past?

Outside of that particular school with that coach, I doubt it. I don't expect a Saint Louis pipeline to develop. However, I'm sure Fuente will leverage the relationship with his former player when appropriate.

Not enough here for me to trust he actually has the speed/twitchiness we want in a DE or Backer. However, if Bud thinks he is a fit that's really all I need to hear.