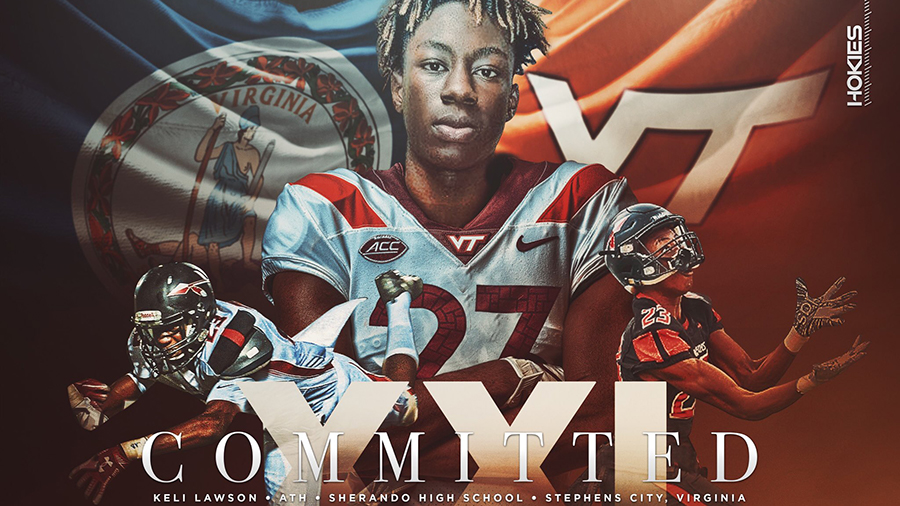 How does a near-6'6", 16-year-old who can scratch his knees without bending over fly under the radar, especially in the social-era of recruiting?

The combination of a broken growth plate and COVID-19 have something to do with it.

As Sherando HS head coach Bill Hall explained it, three-sport standout (basketball, track) Keli Lawson was primed to attract a bevy of offers last fall. However, Lawson only played sparingly as a junior after the aforementioned summertime fracture to his knee. He didn't benefit from any developmental work in August or from sustained weekly practices.

"He would practice Wednesday and turn around and have a walk-through Thursday and then play on Friday," said Hall.

"The highlights that you see of him are of him never practicing, just showing up for four games on limited reps. That's what's a little deceiving about him. If he was actually healthy and could have been full-go and had a year to prepare and execute, he would have been really, really, really different."

No matter though. At the time, it seemed like merely a delay of the inevitable. Lawson used his limited reps to cobble together a highlight tape, but impressing in person on unofficial visits and at summer camps would springboard him to an influx of scholarships.

Unfortunately, that went out the window when Coronavirus froze the recruiting calendar. The NCAA mandated a dead period on March 18 which was recently extended through August 31.

"It was really the perfect storm for Keli," said Hall. "Last year, if he would've been healthy, he would have blown up. Now all of a sudden you have COVID. He's an immediate offer kid at any one-day [camp], at any school."

Lack of film and in-person evaluation might've netted Virginia Tech a throwback diamond in the rough recruit. Lawson, a 3-star (0.8366) athlete per the 247Sports Composite, committed to the Hokies on June 18. He also held a Virginia offer.

According to Hall, Tech wanted him to camp as a last checkpoint before offering.

"This kid is SEC-worthy, every bit of it, and he was flying under the radar," said Hall. "When I called [running backs] coach [Adam] Lechtenberg, and they knew about him, and they were recruiting him, but not like I thought they should. I talked with Coach [Justin] Fuente on the phone, and they got to know him, and we put some more videos out on Twitter so they could see some things that they were looking for. Things that you would've seen at a typical one-day, and you're just trying to get them glimpses of the skills that they see. And then you figure out the background, and all of a sudden it adds up to a kid that's really dynamic."

Although intrigued by the mismatch potential at tight end, Tech recruited Lawson as an outside linebacker. However, he may ultimately grow into a defensive end.

To put it into perspective, Lawson can enforce recommended social distancing, and then some, by stretching out his arms to an 82" wingspan. That length allows him to not only defend in the open field, but shed blockers in the trenches.

"He'll really develop once he can actually work on the skills that match his athleticism," said Hall. "He's really twitchy. He's fast, and really long as you can see by his measurements. He's probably closer to 6-6 than he is 6-5. I saw him listed at 6-4 and I was like, 'he passed 6-4 a long time ago.' He's just really long."

"He's got a frame where you can really put good weight on," he added. "Once he gets with Tech and can get in there, not only the strength program, but the nutrition, and slow down a little bit, and just focus on those aspects. His ceiling is really, really high."

Really hope the knee injury is fully recovered and that he can come in and develop to the ceiling he has. Thanks for the writeup Joe!

Very smart and thoughtful of his coach to help his player out.

It would take me three jumps to equal one of his.

Very agile for a long guy coming off injury. He had options for where he ends up being most impactful.

My jaw dropped after his first long jump. I would need a diving board or a trampoline to get halfway.

it WAS impressive but as an FYI comparison, in 8th grade as a scrawny 5 ft 6 ,25 lb kid, I did a standing broad jump of 8 ft 4 inches.(now the 2nd and 3rd jumps idk if I coulda done right in a row like that)

man you were THIN

Great writeup, Joe. It's nice to get a clearer picture of a recruit. I've been excited about KL since we offered him. Seems like a classic Hokies recruit that can develop into a great player.

Very exciting prospect. No guarantees in recruiting, and particularly with a guy like this with minimal reps coming off injury, but these are tools (length, size) that can't be coached up. It's not hard to imagine the path to him becoming an elite OLB.

Man hes got a really good bit of speed and athleticism not to mention size as well. Hopefully he can heal his knee and get and stay healthy to keep developing.

i like his Beamerball accolades too...definitely needs to be on the FG Block team

I feel like this guy is going to be the next lazy announcer factoid. Instead of "DID YOU KNOW HE WEARS XXXL GLOVES AND BREAKS THEM EVERY WEEK BECAUSE HIS HANDS ARE SO BIG?!" It's going to be "DID YOU KNOW THAT HIS WINGSPAN IS 7 FEET!? HE HAS TO GET CUSTOM MADE SHIRTS TO FIT HIM!!!"

That said, WELCOME TO VT KELI!

"DID YOU KNOW THAT HIS JERSEY AND PADS WERE SO BIG THAT THEY COULDN'T FIT THEM IN A LOCKER? THEY JUST MADE THE PADS BE KELI'S FRESHMAN ROOMMATE BECAUSE THERE WAS NOWHERE ELSE THEY WOULD FIT!!"

Can't wait to see him in Maroon and Orange.

Can't wait for Upside Aplenty to do a sideline interview with Cartoons Plural.

Really hoped he was going to tackle the guy on the bike in the 2nd video. New twist on the classic angle pursuit drill. Haha.

Hall basically laughed that the "official" size from the recruiting services shortchanged him an inch or two.

Stand him next to Tenuta and see who is taller

He reminds of Randy Moss in that he doesn't seem overly fast just because he's so big, but before you know it he'll run right by you. The potential this kid has is limitless-that athletic ability can translate to a few different positions, it'll be fun to see where he ends up ultimately.

"This kid is SEC-worthy, every bit of it, and he was flying under the radar"

Great get by the staff. Can't wait till the coveted SEC schools take notice and he opens up his recruitment

I have been seeing SEC worthy used as an adjective too much. I have always defended the strength of the SEC but casually throwing around terms like this will make the SEC immortal.

I liked the first video I saw a few weeks ago of his moves and am glad he committed to VT. I'm not a football guru by any means but I have a feeling that if he can stay healthy he will end up in the NFL after his time at VT. I believe he will keep his commitment and sign with the Hokies and not go anywhere else.

Nice - now take this down before anybody from Auburn, 'Bama, tOSU, UNC, UGA, LSU, or other place with sneaky bagmen that are good at their jobs see it!!!

Is he part frog? The broad jumps after the deadlifts were impressive. He also seems to have a pretty heavy shoulder for being 195 lbs.