Hokies Counting on Tyrell Smith, Braxton Pfaff to Fill Some Gaps on the Offensive Line

Vance Vice is testing out some fresh faces along the line this spring. 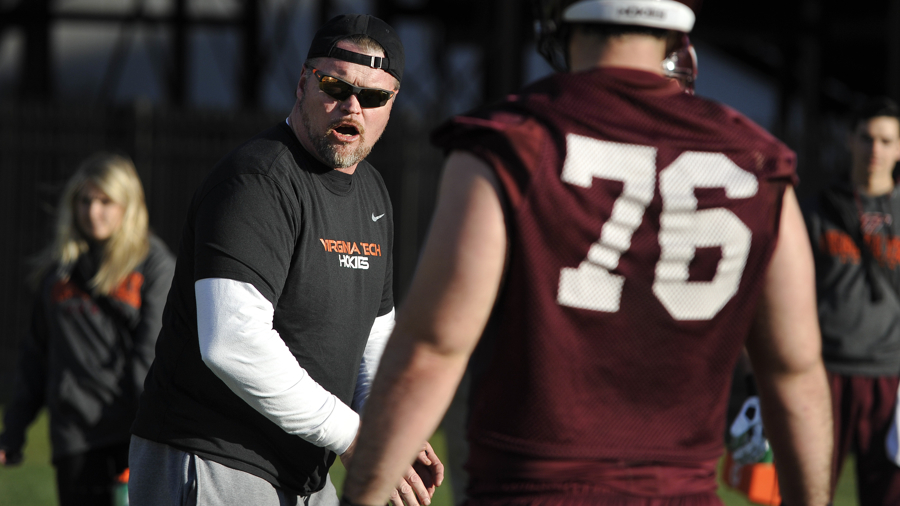 Vance Vice has plenty of work to do to replace the two starters Tech lost on the OL. [Michael Shroyer]

Of all the players on the Hokies' offensive line, Wyatt Teller seems about as unlikely a candidate to lose his starting spot as there could be.

Sure, the mercurial (and perhaps, at times, immature) redshirt senior has slid down the depth chart or found himself on the bench on occasion. But rarely did those demotions seem to have much to do with Teller's talent level.

Yet, Teller confesses that one player came a bit closer than he might've liked to actually dislodging him from his starting spot last spring: Tyrell Smith.

"He was coming for my position last spring," Teller said after practice on Thursday. "It was real. I was like, 'What the heck?'"

Indeed, Teller says OL coach Vance Vice has never been shy about reminding his players that "rent is due every day," and no starting job is ever truly safe. But these days, Teller doesn't have to worry quite so much about any threat from Smith, at least.

Instead, the redshirt sophomore is starting to figure into the Hokies' plans as they try to replace two longtime starters in former RG Augie Conte and RT Jonathan McLaughlin. In particular, Vice is trying out Smith at right tackle, even after he spent most of his previous Tech career at guard and center.

Though Smith does lack the lanky frame of his would-be fellow starting tackle Yosuah Nijman — he's certainly no shrimp at 6'3" and 295 pounds, but Nijman is still a solid four inches taller — he's still looking to the LT for tips as he reacquaints himself with the position.

"He's just a freak," Smith said. "His footwork, how he practices, everything is just 100 percent all the time, so I just want to model my game to be like his every day...I'm just going to do everything I can to come as close to that as possible, just continuing to work every day."

Smith says he's "comfortable" at tackle, even after spending a few years focusing largely on other positions. But he suspects the biggest hurdle will be getting used to playing on the right side after playing for most of his career on the left.

"I've been on the left side my whole time here and in high school, so moving to the right side, I just need to get used to being comfortable in my stance," Smith said.

Luckily, he says Nijman has been tremendously helpful in that process so far. The pair both hail from up north in New Jersey, and though they may have started their Tech careers at the same time, the junior's starting experience has him ready to take Smith under his wing a bit.

"Growing up in Jersey together, we came in together, and he's helped me as much as I can to help the team out," Smith said.

But even if Smith sticks at right tackle, the Hokies still need to find someone to replace Conte at right guard. Parker Osterloh could be a contender for either spot this fall, but he's out for the spring, giving other players like Smith and redshirt junior Braxton Pfaff a chance to shine.

"He brings it every day, and I feel he's gonna be a big player and he's making the right push right now," Teller said.

The LG has his own history with Pfaff that predates even his time at Tech. He remembers the pair competing at a camp as recruits, back when he still played defensive line.

"He's the only person in the VTO camp that beat me one-on-one when we were being recruited, so he's a pretty good player, another hard-working kid," Teller said.

Pfaff is the top dog at right guard for the moment, but if Vice's tough talk is to be believed, that could change at any moment. But senior center Eric Gallo says a little spring uncertainty on the line is nothing to fret over just yet.

"At the beginning of each year, there's always going to be some sort of uncertainty, and the great part about spring ball is that it is a time to develop that continuity and cohesiveness with the offense line," Gallo said as spring ball opened last Monday. "No matter who it is, us five are going to try to work together to the best of our ability, and now is the time to really start that process and start building the unit up front."

Yet, for the second year in a row, the Hokies are also searching for a new starting quarterback as they work out the kinks along the offensive line. Gallo is plenty familiar with redshirt freshman Josh Jackson (especially after he briefly pushed for the starting job last year) but he says the line is starting to learn more about transfer A.J. Bush and freshman Hendon Hooker now that spring practice is in full swing.

"They're both doing really well, just watching those guys throw the ball, they're very natural throwers, good arm strength from both of them," Gallo said. "And being new guys, it's really great to see how they're fitting in with the team already. Being first semester guys, there haven't been many problems getting to know them. They've come in and taken in our culture, and they're fitting in really well."

The uncertainty under center may make Tech fans (even some coaches) a bit uneasy, but Gallo said the line isn't terribly worried about the issue just yet. If anything, he thinks the QB battle might even help keep the team on its toes.

"The competition, it's good for the team," Gallo said. "And from a center standpoint, playing with different quarterbacks at the same time teaches you their different styles and how they're gonna be different. We did it the previous season and we're just gonna approach it the same way. From my standpoint, it's not going to make a difference no matter who is back there."

Nice, love to hear how hungry the big uglies are. Everything starts in the trenches, and with another new starting qb a solid O-line would definitely be desirable!

how hungry the big uglies are

"And from a center standpoint, playing with different quarterbacks at the same time teaches you their different styles and how they're gonna be different. We did it the previous season and we're just gonna approach it the same way. From my standpoint, it's not going to make a difference no matter who is back there.

Anyway else just have a traumatic flashback to the ball getting hiked over Evan's head at the end of the 2nd quarter against GT last year?

I went all the way back to Bristol, personally. That's my "maybe if we had more time..." moment.

But even if Smith sticks at right tackle, the Hokies still need to find someone to replace Conte at right guard. Parker Osterloh could be a contender for either spot this fall, but he's out for the spring, giving other players like Smith and redshirt junior Braxton Pfaff a chance to shine.

I would be amazed if anyone beside Parker Osterloh got that starter position. He has been a backup for so long. A fifth year senior already?

rather see osterloh at RT with his size.

quickness might be an issue with his size at OT.

Smith is no small man either

True, but the smallest of the 3 and osterloh has some freakish wingspan himself.

Or you can have both? Difference is one can be developed/addressed and one can't....

Great article. The o-line is a key element in CJF's scheme. It can make a better than average QB look fantastic and a decent running back into a Heisman candidate, but never get the credit (or blame) based on their performance. .

They got plenty of blame last season. At least on TKP

For her, legs around every time!

I think she smokes Emma.

I'm more excited (nervous) to see how this OL situation plays out than the QB situation, honestly... the Fuente offense isn't the hardest to grasp from the QB's perspective (that doesn't mean it's not effective so don't twist that the wrong way)... very quick reads that are either there or not... however, it all means nothing if the OL isn't blocking well.

Here's to hoping that Smith and Pfaff are the answer and that the starters solidify themselves ASAP so they can mesh all summer.

Next time you get the chance, if you could please ask Teller and the guys if Coach Vice keeps practice politically correct, I'd be interested to know the answer...

He sports the mullet and wrestles gators.....what do you think?

It seems like we could legitimately field a 1st and 2nd string O-line this year with capable players (experience for all of them could go a long way). The O-line depth hasn't seemed this good in a while, hopefully many of these guys get experience this year and we continue to get at least 3-5 in each class depending on room.

I think that is the goal of every team to have a 2 deep along the offensive line. Our recruiting for the o-line has struggled overall for the past 10-15 years. Now we have been bailed out several times or didn't have to worry about it as much because of our mobile QB's. This is priority #1 imo, building that 2 deep for now and in future seasons with CJF's offensive scheme.