Beamer fast-tracked to a degree. 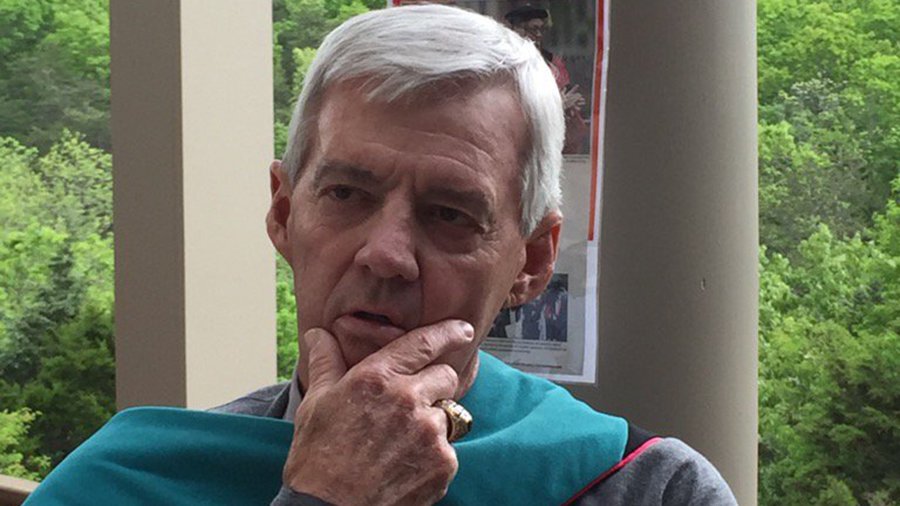 The doctor of gettin' after ya.

Radford University bestowed an honorary doctorate of public service upon Frank Beamer. Because let's be real, pummeling the Hoos 12-straight years was quite the public service. Beamer also served as the university's commencement speaker last Saturday.

"I got to tell you something right now, though," Beamer said. "Your days of hanging out at BT's, Macado's or Sharkey's on your parents' dollar are over. It's on you now. Welcome to the real world."

"I can see the @radfordu Class of 2017 has enhanced the value of my #radfordu degree!" - #RadfordAlumnus Frank Beamer MS '72 pic.twitter.com/N6pMvgatuh— Radford Univ. Alumni (@radford_alumni) May 6, 2017 I move that Frank be knighted by VT:

That way he can be SIR Doctor Coach Frank Beamer.

Why stop there? He also needs to become an honorary lawyer. Then he'd be Sir Doctor Coach Frank Beamer ESQ.

How awesome was our coaching transition? What other program could have had the replacement of an institutional icon resulting in: It's so awesome. Whit turned the knob to 11 haha... And I'm not sure any program in a similar circumstance got past 6. Although Beamer had a lottttt to do with it also. And Frank did it for VT, not his legacy. I couldn't be happier with this transition regardless of what comes next. IMO, VT set the standard for the "program building/longtime legend transition" and so happy to see the media recognize that often.

I honestly was one of those who thought CFB was staying a little too long, but I also thought he earned the right to choose his retirement and I'm so proud of how he did it. Had it happened earlier (pre-Whit) who knows where we'd be. Fuente was the one and i believe that's what Bud stayed for also. We nailed the hardest part of running a successful program and I still think about how amazing that is.

And then there's South Carolina...

I mean, Florida State seems to have turned out okay.

They were kind of publicly chasing Bobby B out, by naming Jimbo as the incumbent though. I wouldn't have wanted Frank to go out the way Bowden did

In the end, but no compliments were paid to the way they handled it. Or do you think the end justifies the means?

I just think VT was less dramatic because we never went the "HC in waiting" route and also aren't realistically the same program/destination as FSU. I feel like (and remember) a lot more consternation about whether VT would get the caliber of coach we landed right out of the gate. We had a super prominent DC with a good claim to be the rightful heir, and many thought it was either a Bud or "No Bud" situation.

Also I based a lot on Beamer announcing retirement before the season was over a lot on my grade, and our chances of Whit landing the best fit. In addition, that successor was in place before the end of the UVA game and that few extra weeks was critical for the JUCO signing period which allowed Fuente to bring in a QB who could lead us to 10wins and a Coastal title out of the gate in season 1. We got poached a little but it could've been worse also.

That timeline, IMO, is why we are having such success recruiting already. Who knows what would've happened without Jerod, who seemed to be the perfect QB for Fuente to transition with... Just so many little details that added up. Obviously the book is still being written, but returning to 10-win seasons and ACC championships was what I wanted and year 1 did that in addition to a bowl win over an SEC school and beating Notre Dame in their house. Didn't realistically expect any of that right away..

Without jerod I think we would have had an 8 win season with Josh Jackson at the helm and I'd feel a lot better about QB this year.

Agreed. And whether it was 5,6,7, or even 8 wins, no ACC Champ appearance, maybe a bowl win in lesser bowl or maybe a bowl loss. How different would our recruiting look? Too many unknowns to for me to think the transition to date could've gone any better. This was really the best possible outcome, and many thought it wasn't even a possibility until season 2 or 3.

We def have accelerated our ability to recruit both in and out of state in ways that we couldn't have without the series of events that brought us here. Whit >>>>

Okay, after the recruiting uptick continuing and exceeding its previous trajectory I am convinced we literally are experiencing the best case scenario for this transition. We wanted QBs and Fuente has delivered. Jerod broke almost every record in year 1, and now we see the Fuente hallmark in Quincy Patterson. Decent offer sheet, underrated and now playing himself into the Elite 11 QB camp and the Opening.
When Fuente landed his commitment 247 had him as as the 45/46th(?) QB in this class and now he's among the top 11 or 12 in direct competition. He's 6'4" and all the way in Chicago, Illinois. Now Penn St and others are pushing him hard and he's staying loyal to Coach Fu. Beating ND for Hooker was big but now we see a pattern. This program is doing exactly the right things and the recruiting wave is a huge statement. Top 20 class just became the 15th best class in the nation. Whew haha