Caleb Farley Out for the 2017 Season 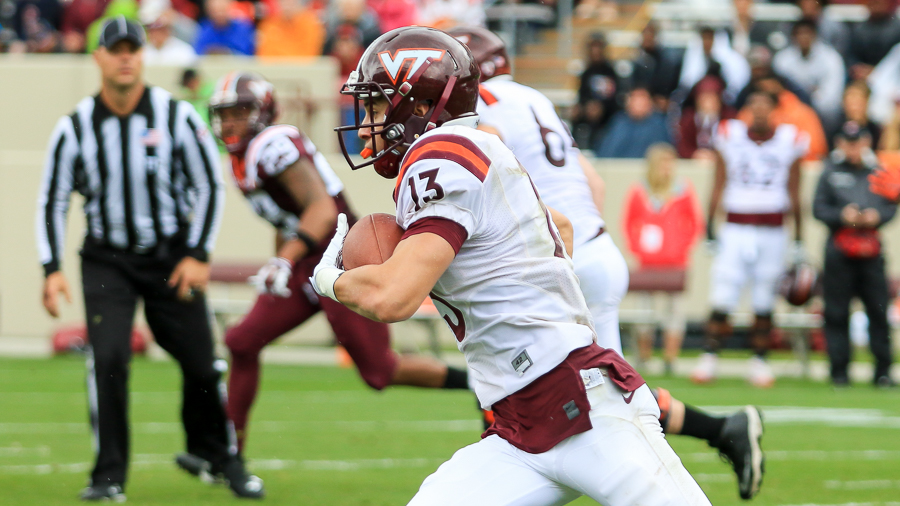 The rumor of an injury spread Wednesday afternoon and was met head on with the following Farley tweet.

"Consider it pure joy, when you face trials of many kinds because you know this testing of your faith produces perseverance" James 1 — Caleb (@IamCalebFarley) August 2, 2017

Brad Cornelsen mentioned Farley on Monday among players to fill the holes at wideout left behind by Isaiah Ford and Bucky Hodges.

"Of course, Caleb Farley being here, an early grad this spring. He's a guy that can make plays that we're going to have to find a way to use him," Cornelsen said.

"Our staff feels that the best way Caleb can contribute to our success this season is playing wide receiver," Fuente said. "Caleb is a gifted athlete who is passionate about the game and who has worked diligently since he arrived on campus. While receiver is certainly area where we're not deep at currently, we reserve the right to adjust Caleb's role should circumstances change."

Unfortunately I have to say...

IMHO, this is the best Macho Man gif you have posted so far.

While I don't think Farley would have been an every down guy right off the bat, his ability to take the top off the defense and then go up and win the ball is unique to the current receiver group. His loss will have a downstream effect on the rest of the offensive scheme and allow defenses to tighten down on short routes. Look for the Hokies to attack vertically more down the seams with this loss.

I hope he has a speedy and full recovery.

Get the surgery and let hit heal. These guys want to push their rehabs (Marshawn and Shai) and they get hurt again. I hope everyone is patient and he comes back ready to play next season.

The bigger WRs, Kumah, Henry, and Patterson, are going to have to really step up this year. I think they will. Could we see more short passes (screens, slants, etc.) with Pimp, Clark, and Carroll. I guess the same for Savoy/Grimsley. That evening worked out pretty well for us...

I thought the significant limitations on the .gif format prevented them from looking this good, but I just looked it up and apparently you can overcome the limitations by making the image significantly larger and processor-intensive (which isn't an issue with how far computer technology and internet speeds have come since the '90s). I learned something today!

I just clicked the enhance button a couple times.

This sucks out loud for the team and Caleb especially but there is a bright side.

1. Better the injury happened now than in the middle of October, giving way for a redshirt and a hopeful full recovery by the next August.
2. Caleb gets a year to get down the full playbook and is able to fully learn the WR position.

Bottom line is it sucks, but the matter of the fact is he is still going to have a fantastic career here, we just have to wait a little longer to see it happen.

Time for guys like Patterson and Kumah to step up.

There always Kumahs a time where people need to step up and I'm Farley certain this is that time. It's a Kalil set back but I'm confident that we have the guys the Phil in.

But seriously, here's to a speedy recovery and coming back stronger.

I'm sure we can Phil in Henry potential lost yardage and Carroll us through the season. Denmark it down. Savoy?

Man that really sucks. I hope he has a full recovery and is ready to make some big time plays next season. I think it's time to move Tim Settle from punt returns to wide receiver to get some more quality depth.

Or at least width.

It's national IPA day, so I am now going to have to drink because of this news.

Is bourbon an IPA?

Asking for a friend.

I mean, is mayonnaise an instrument? If by IPA you mean Indisputably Preferred Alcohol, then yes, yes it is.

Wish a speedy recovery for Caleb. He's the type of talent that makes his presence known (ex. Spring Game) and is going to be a star for us. I look forward to watching Kumah and Patterson mature as our only "throw it up" threats left on the team this year. It also excites me having a Tre Turner (6'4"), Darryle Simmons (6'3.5"), and Farley (6' 2") along with Kumah (6'2") and Patterson (6'2") as legit deep threats next year.

And forgot to add Hazelton (6'2") to that list next year. Dang thats alot of potential on the outside, not to mention Pimp, Savoy, Grimsley, Murphy, and Denmark on the inside.

(Can't decide whether this is a transfer joke or a QB <-> TE joke.)

Carroll, and Dejuan Ellis will also be very good on the inside. WR is looking like a really solid position along with TE and RB. A few years ago all we had was Stanford, Knowles, and Byrn and Asante was out for a year. Big improvement already. We should still be good at WR this year. We have a lot of talent still.

Theres always a silver lining. This news has shown that TKP has not lost its strong gif game. Did laughter bring tears or my tears bring laughter?

Son of an uva goat

Poor kid, should have picked a different number.

Seriously, wishing him a speedy recovery.

She's not supposed to sad when she blows. Someone was doing something wrong.

You play the flute at work?

I know he's just a freshman, and he's learning a new position, but he was still the player I was most excited to see this fall. This sucks. I hope he recovers quickly, and doesn't lose and speed or explosiveness.

Anyone want to place a bet on which #keyplayer gets hurt before the 2018 season? Been a couple of days, but nope... still not over it yet.