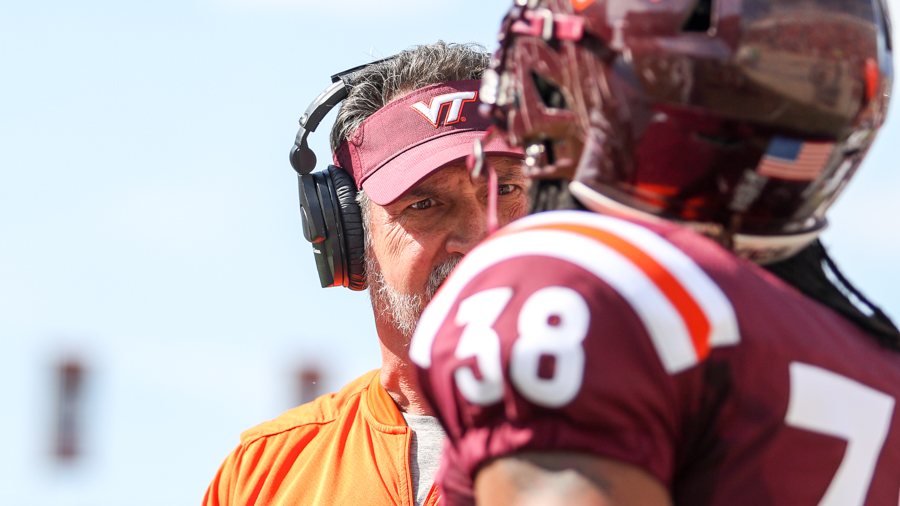 Welcome to the debut of Four Down Friday. For each game this season, I'll write a four-point preview. What a quirky coincidence, there are also four downs in football. The focus areas will change from week to week, but the idea will still be the same — breaking down Virginia Tech's upcoming game in a more casual manner. (Read: I'm not good at film reviews or statistics.) My goal is to make you a more informed fan on game day.

Without further ado, on to the Hokies-Seminoles matchup.

First Down: Jitters Out The Gate

It's not unreasonable to say a young Hokies team might be nervous on Monday night. It's a big game — No. 20 at No. 19. I mean, ESPN has Marty Smith calling the game from a blimp. Come on.

In most situations, a young defense in the first game of the season going up against a program with big-time talent like Florida State spells disaster.

But judging by history, it seems reasonable to super sim right ahead to the playoffs.

Great nugget here from @PeteMoris -- Virginia Tech has 68 career returning starts on D, thefewest since 2010. The last time Tech had 4 returningstarters on D was 2008. In both years, VT won the ACC title.— Andrea Adelson (@aadelsonESPN) August 28, 2018

I joke. In all seriousness, it's not going to be a disaster. Why? Because, in case you haven't heard, Florida State has a new head coach. And if this is news to you, boy do I have an offseason to tell you about.

French wrote up a great film review analyzing Willie Taggart and his offensive schemes. If you're a TKPC member, you've probably already read it, twice. If you're not, and you want to seem really smart around your buddies on Monday night, here's your chance.

With a new coach, comes new systems. And with new systems, first game stumbles. At a point in the second quarter of Justin Fuente's inaugural game at the Hokies' helm, Tech trailed Liberty. Sh–excuse me, stuff happens. I don't think Tech should expect Florida State to be perfect from the get-go on Monday night. The Hokies, regardless of their relative inexperience, need to take advantage of those lapses. More on this later.

Second Down: All Eyes On Josh Jackson

Justin Fuente has a returning starter at quarterback.

Now repeat this after me.

The last time Fuente was in this situation, it was Paxton Lynch.

In relative terms, Jackson's freshman year is comparable to Lynch's sophomore campaign. In that sophomore year, Lynch threw for 3,031 yards, 22 touchdowns, and just 9 interceptions. Lynch improved on all 3 categories in his junior campaign: 3,778 yards, 28 touchdowns, 4 interceptions. For Jackson to make that type of boost across the statsheet would lead to quite a successful year under center.

The redshirt sophomore from Ann Arbor, Michigan was named the starter by Fuente two weeks ago, without much fanfare.

Up to that point, the offseason had been pretty brutal. The dismissal of Mook Reynolds. Adonis Alexander leaving for the NFL supplemental draft. Jeremy Webb, Alexander's presumed replacement, lost for the season after tearing his achilles while stretching. Luckily, there haven't been any unforeseen circumstances, and the Tech offense still has their QB1.

Jackson threw for 2,991 yards, 20 touchdowns, and 9 interceptions last season. Take into account the scuttlebutt that Jackson was playing hurt for the final stretch of the season, and those are really good numbers for a redshirt freshman in the ACC.

There was a lot of criticism directed towards Jackson by the end of the 2017 season. I'll admit, I was one of many anxiously awaiting the arrival of Quincy Patterson to save the day. But now, I'm placing all of my faith into Jackson and expecting a big leap forward this season. It's a paradigm shift, but I don't think it's misplaced.

I mentioned FSU's new offense and the Hokies' need to take advantage of first-game blunders. Who might step up into that role for Bud Foster's squad?

The obvious place to start is Ricky Walker. A 2018 preseason All-American, Walker is coming off a 2017 season in which he earned an All-ACC honorable mention. During that season, Walker recorded 41 tackles, 12.5 tackles for loss, and 4.5 sacks. Walker has been called the bell cow of the defense, and you won't find many who disagree. His experience and ability will do wonders for the Hokies as they seek to capitalize on Seminole mistakes.

That's the clear choice in terms of key players. What about about a sleeper pick? I present to you redshirt sophomore, defensive tackle, Jarrod Hewitt. The coaching staff has been high on him for the entirety of fall camp, praising his development. I spoke with him briefly during media day.

"It's an experience based position, but I've got to give it up to Coach [Ben] Hilgart and his staff," said Hewitt. "They've completely changed my body, changed the way I can move. I'm a much better athlete than when I came in here. I dropped weight but in no means have I dropped any strength. They have completely reshaped how I'm a football player."

Hewitt was a prolific powerlifter in high school, finishing fourth in Florida in 2015 as a heavyweight lifter. This kid is strong. For Hewitt to improve as an athlete while also keeping that same strength seems like a best case scenario. With Vinny Mihota limited while recovering from a torn ACL and not starting in Tallahassee on Monday night, Hewitt will look to step in and silence some doubters of the Hokies' defensive line.

Fourth Down: The Intangible

On the field analysis is great, but I want to mention one factor that isn't directly related to either football team but will still impact the game. The crowd.

Did you know this team is young? Have I mentioned it enough times yet? No? Good. Here I go again. Thanks to Andy for doing all the research for me.

There are 49 names listed in the #Hokies' two-deep on offense and defense. Of that group, 33 are sophomores or younger.— Andy Bitter (@AndyBitterVT) August 29, 2018

After some quick math, almost 70% of Tech's two-deep travelling to Doak Campbell Stadium (capacity, 79,560) will be sophomores or younger. All offseason I wondered if the coaching staff would work more than usual on preparing its young team for a hostile environment. So I asked about it during media day.

Walker explained during summer workouts Hilgart would have them running in black sweatpants and sweatshirts while blasting the FSU's familiar war chant. Not only does it prepare the team for some Florida heat (forecasted to be 80 degrees at kickoff on Monday night right now), it gets them ready for that dreaded noise.

Jackson and offensive coordinator Brad Cornelsen mentioned that during practice, they've been piping crowd noise into the Beamer Barn and playing the chant. Which, to be fair, is a pretty normal way to prep for a big game. I mean, Notre Dame is already doing it for their game in Blacksburg in October. I asked Cornelsen if there's anything else the coaching staff could do to help prepare the young guys for a hostile environment besides the artificial crowd noise.

"I think that's about all you can do," said Cornelsen. "The noise will be a factor. Making sure we can execute, communicate, line up, get the ball snapped. That's usually about the extent you can do. It'll be a new experience for some of the guys, some of the guys have been through it before. It's a first game, that goes along with it too. Guys put in a lot of hard work, they'll be excited. Making sure we stay composed and go execute will be important for us."

Whole lotta coach speak there, but when Cornelsen answered the question, his body language seemed to suggest that he feels confident in how the team has been prepared for the tussle in Tallahassee.

If you want to educate yourself on what Cornelsen means by going out and executing, maybe go check out Mason's article on Florida State's new defense and how Tech's offense might attack it.

Might as well stake my claim to this game after all this talk. I think the Hokies will stay in it, but I also think Florida State's home field advantage will prove enough to eke out the win. Give me the 'Noles, 31-27.

Fun write up. I am looking forward to these.

I'm not going to pretend to be impartial. I'm a fan. Give me the Hokies. I think going from Fisher to Taggart requires a cultural change that is not going to be in place after one off-season.

Great job! Look forward to these all year!

Watched this kid named Moore in the Purdue game last night. He was unbelievable quick and shifty. He had almost 200 all purpose yards, yet he was better contained by the NW D in the 2nd half. And Northwestern won due to Purdue turnovers.
FSU has Akers. VT has Bud Foster.
There could be a parallel in the VT-FSU game. The universe aligns.
Go Hokies! Win this!

That guy was really fun to watch. FSU and Alabama are probably gritty their teeth after that.

He set the school record for most all purpose yards, in his first college game as a true freshman.

I really enjoyed watching these during the CFB Playoffs, mainly because I didn't care about either team that was playing. (That, and it was buffering much, much less than the other broadcasts.) It was interesting, and I learned a lot, but I don't think I could watch them during a Hokies game.

However, if they have the SkyCam channel, I'm going to be fucking thrilled! SkyCam view is the best thing they do, so long as they're focusing on the play on the field. No talking head, no graphics covering the view of the field, and with the audio from the stadium, you can usually hear the announcer calling the player and yards gained. Great view from the quarterback's perspective. It's the closest thing to actually being there.

I like this new feature. Keep up the good work Skutt.

I like the tidbits about the relative inexperience of the players and preparing for the warchant in Doak. I wonder if Tech's fancy Virtual Reality Lab could be useful for simulating that type of environment for the players.

I hope Hewitt lives up to all this hype. Regardless, it's great that he confident going into the season. I just remember seeing him get tossed around last year when 8ball and 4 were out.

Maybe you should put on your glasses. ;^) 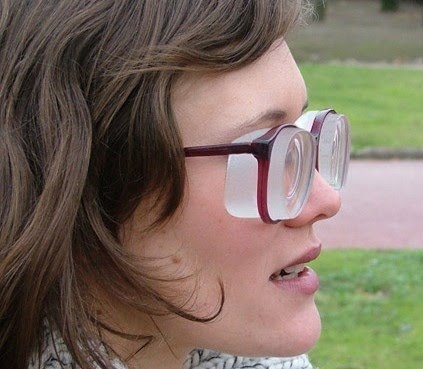 I'm so glad to be wrong. Got any of those glasses?

On TKP, we are just at the right level of homerism :)

Would love to be proved wrong! Just trying to approach this season with less expectations than years past where I got too emotionally invested.

That is a fantastic decision. Quality of life improves so much when you do this. At the end of the day it's just a game and we watch to remove ourselves from the stresses and frustrations of our lives for a few hours. I had this realization in 2016 after the Tennessee game. It's just not worth it.

good stuff, I say we have a decent chance

I look forward to the rest of these this season.

Feel free to share any suggestions or feedback you have for the column moving forward.

I wish I could disagree with a couple of parts, notably the prediction, but I really don't.

I mean, Notre Dame is already doing it [simulating loud stadium noise] for their game in Blacksburg in October.