I have never photographed a UVa football win. 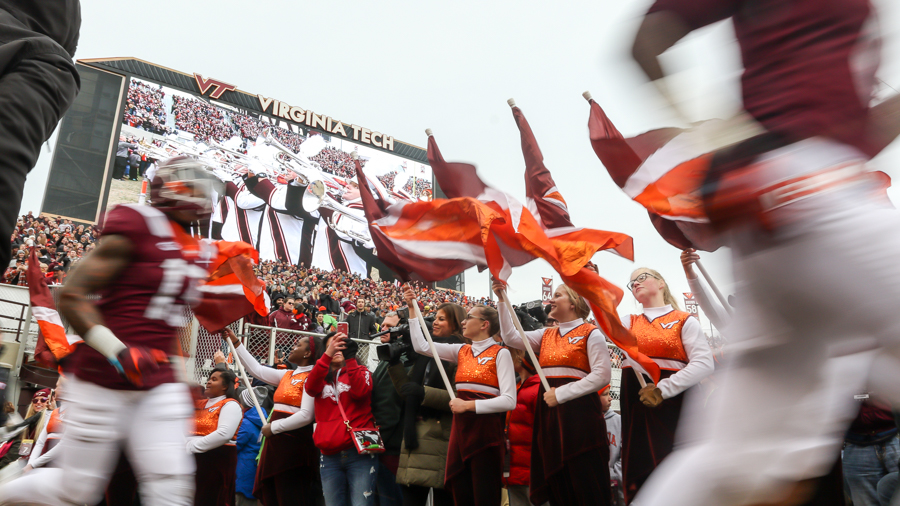 I've had a chance to decompress from the Commonwealth Cup and I am still giddy every time I watch Titanic Tears, so get your Celine Dion turned up and take a trip with me back to last Friday where I warned y'all that my next photo gallery was gonna be big.

The Thanksgiving holiday made some pregame stuff weird, I'm not gonna lie. It was like experiencing a bizarro Virginia Tech football game, starting with the pre-game walk. There were no cadets in town yet, which means no Highty-Tighties, which was just weird when the team disembarked. The lighting at that time of day though was excellent:

Fu agrees with me:

Getting into Lane, a lot (I mean a lot) of the photographers were hanging around midfield during the pre-game warmups waiting for something to happen; minor scuffles, trash talking, something usually goes on for at least a few seconds. Turned out all that happened was a bunch of photographers and refs standing around, but we did notice that the usual pregame handshake between head coaches did not happen, instead they stuck to their respective sides of the field.

Something about the composition in the Justin Fuente photo tickles my photography fancy. Layers, framing in the foreground, it's got it all.

Getting into the game action, things you don't notice on first glance and only see later on, this early almost-sack on UVa's Bryce Perkins actually happened by his dreads, which is a very painful yet legal football move.

Perkins played a hell of a game, but it felt like as the game wore on that he was ending up on the deck every other play. It was like they were running the Tyrod Taylor playbook without a Darren Evans/RMFW/David Wilson to take some of the carries (and it almost worked!). It did make many opportunities to make a photo like this one of Reggie Floyd leaving a good ol' fashioned stare-down after a hit:

Good sports photographers always shoot through the play. I got completely blocked out by a ref on Tre Turner's crazy one-handed touchdown grab, but that's okay, because instead I get this levitating football/screaming ball boy combo, which you just don't get everyday:

You may have seen this next series on Twitter, but here's what a blocked punt looks like from about 20 yards away.

If you GIF it it almost looks like he takes it off his foot while casually walking by:

The game really started getting interesting in the 4th quarter after an appearance by Sam Rogers. He quite possibly may be the first person to actually make the 3rd quarter intermission...thing...the athletic department decided to replace the Hokie Pokie with actually work:

Fuente also got into the yelling, but for more personal (foul) reasons, as seen here with him pointing at extremely convincing video evidence on Hokievision that the ref is wisely ignoring to stick with plausible deniability:

Events certainly got sticky at the end of the game. I thought multiple times that I had made a photo of what would be the depressing story image for the post-game summary. These probably would have been the only photos most of you would see if Lucy didn't yank the football away from Charlie one last time:

Instead we got the most unbelievable of endings that started with a fumble into the end zone for a touchdown and ended with Fuente storming the field and Josh Jackson holding up a big "ONE FIVE" towards the UVa benches:

This is the look of someone who knows they've had a job well done:

And finally, this is simply the look of Bud Foster after making his way down from the coaches booth.

You can take a look at the entire photo gallery here and every photo gallery ever made for The Key Play at photos.thekeyplay.com.

God looking at these pics makes me wish even more that Turner had just stolen the ball off the punter's foot and ran it in without it ever touching the ground. Still was epic and awesome, but he also deserved the TD there.

I am having a shitty day at work and this really picked me up, thank you for this glorious work!

Thank you! I'm glad to hear that.

Somebody needs to post this gallery over at the sabre cause eff uva!

I'm so happy for Ricky. This year must be hell for him. Going from a team with half a dozen NFL caliber players on D to being one of a handful of guys who really brought the lunch pail. He has set tone and refused to let the D quit.

Flip side, Willis is as Hokie as they come. The guy loves competing and wanted that game so goddamn bad. It's really cool to see these young men pushing like that even with how turbulent the season has been.

re: Willis - Someone else compared Willis with Brewer and I think that is a good comparison. Their skill sets were not the same and neither one will be confused with a Michael Vick or Tyrod Taylor. However both play(ed) with their heart, took hits, and never quit - that is what makes me proud to have had them wear maroon and orange.
Go HOKIES

If you GIF it it almost looks like he takes it off his foot while casually walking by:

He was close to just taking it, how sweet would that highlight have been....blocker just snatches the ball from the foot and walks into the end zone

That Fuente shot is awesome. Thanks for sharing these with us.

PS: Love the Dred-Grip on Perkins!

That last one with the lunch pail being raised next to the Cup should be what shows up in the dictionary under "Virginia Tech Football". Only three more years of domination before the up can enroll at VT.

My wife doesn't know it yet but I'm getting that one for Christmas.

Made this my signature!

I almost changed mine to it as well.

We look forward to the next 36 years of dominance!