As the Hokies try to extend the bowl streak, which games should make you most nervous for the rest of the 2019 season. 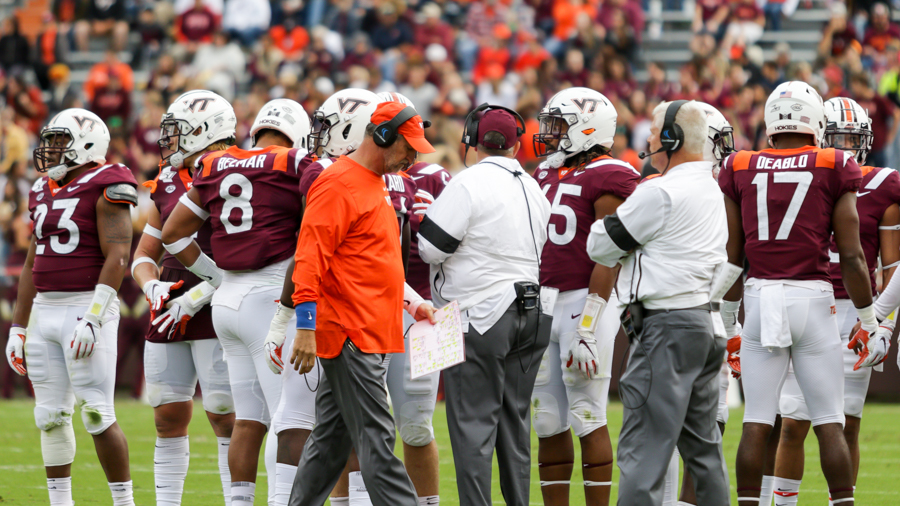 When you live in Blacksburg for four years, Virginia Tech football isn't just an activity. It's your life.

As an undergrad, I ate, slept, and breathed Hokie football. I weighed the strengths and weaknesses of each week's opponent in my head (luckily as a communication major, I had some extra room to spare). I constantly had a box score open, a weekly Tyrod Taylor highlight pulled up on YouTube, and multiple conversations about how Ryan Williams really did have an outside chance at the Heisman. My friends and I spent all our time with Tech football. It had dinner with us at Owens. It polished off Natty Lights with us at an overcrowded Terrace View apartment. It was faithful every Saturday, and slouched on the couch next to us the following Sunday morning.

It engulfs you in a way that can only happen when you're young and have nothing else to worry about. For years, the biggest problem in my life was whether or not a woeful Tech offense could muster up enough points to win. Winning left me high, and losses crushed me for a full seven days. It was inescapable.

But like any collegiate relationship, my connection with Virginia Tech football changed as I've aged. Not in a way that's less passionate, but it's a little less all-consuming. I met most of my closest adult friends during my time in Blacksburg, but it's not like we see each other every day. In fact, since moving away from Virginia I see them a few times a year (if we're lucky).

Responsibilities like jobs and families have a tendency to take occupancy of what was previously empty headspace. The Hokies used to have full domain over my brain. Now there are other tenants.

My body, however, rejects this decision. Because every week, at some point before Saturday, there's a small ball of anxiety in the pit of my stomach that tells me how nervous I am for the game ahead. Sometimes it's fleeting, and sometimes it starts to gnaw at me on Monday morning.

The feeling scales up and down depending on a few things. If it seems like there are a variety of outcomes, it gets worse. For instance, when Tech opened the season in Tallahassee in 2018, I was nervous for two weeks — it felt like FSU could win by 20, or Tech could come away with a statement win. When it feels like I know what's going to happen (good or bad), there aren't as many nerves. Last weekend I went to a music festival and didn't have service during the Rhode Island game, and barely thought twice about it.

I call it my anxiety index. My body's way of telling me which Tech games I find most important to a particular season. As we crash through the back-half of the season, the index will fluctuate heavily around one thing; bowl eligibility.

I know it's probably archaic, but I love the bowl streak. It's one of the few things the Hokies have left to make them a true national college football brand. It's easy to pooh-pooh the streak, especially since it's been held alive by postseason matchups in places like Annapolis and Shreveport over the last five years. But it keeps Virginia Tech football in the conversation of competence. It puts them on a list with programs like Georgia, Oklahoma, LSU, Alabama, and Clemson, and keeps the perception of the program high (sometimes higher than it deserves).

When you see the number (26 years, for those who stopped counting), you don't see the ratio of Sugar Bowls to Independence Bowls, you just see a reminder that the Hokies have been an above .500 team for nearly three decades. It's a great indicator of long term program health.

To me, it's important that Justin Fuente gets this team to 7-5. I'm not saying a bowl berth should shield him from scrutiny, or that sneaking into a lower tier postseason matchup should be the bar to clear. But it's important for the future of the program to keep the streak going for as long as possible.

(PS: if you're a fan who roots for bad things to happen so big changes can be made, I get it. But I couldn't stomach willing this team to a losing record so a few coaches get fired. Just a me thing.)

The 2019 anxiety index correlates directly to the path to seven wins. The 50/50 games which seem up in the air will make me most nervous — as you'll see, Tech will need at least two 50/50 wins to keep this thing going — and the matchups I feel like I have a decent handle on will be lower.

Here's a power ranking of how high the last six games fall on the index.

I've already accepted the loss here, and it won't bother me at all when it happens. As weird as it sounds for a game on the road against a probable top-10 opponent, the stakes are almost non-existent.

Ian Book will likely throw for (approximately) 640 yards against a secondary struggling to cover five-wide looks. They'll load the box and make Hendon Hooker succeed through the air, targeting the strength of their defense (the Irish allow less than 200 passing yards a game). If the Hokies are able to pull out a miracle win, it's gravy. But it's a non-conference game with no impact on the ACC Coastal race plus the least winnable outing on the schedule. Ranking it lowest on the list was a no-brainer.

Also yes, I'm still holding out the slightest bit of hope about a Coastal crown. It's currently the most irrational belief I have. But hey, the Hokies are undefeated since making a quarterback change! And the Coastal is the least predictable (and most dumper fire-y) division in the Power Five! Anything can happen, right?!?