By the end of the night, the Hokies were the head of the pack. 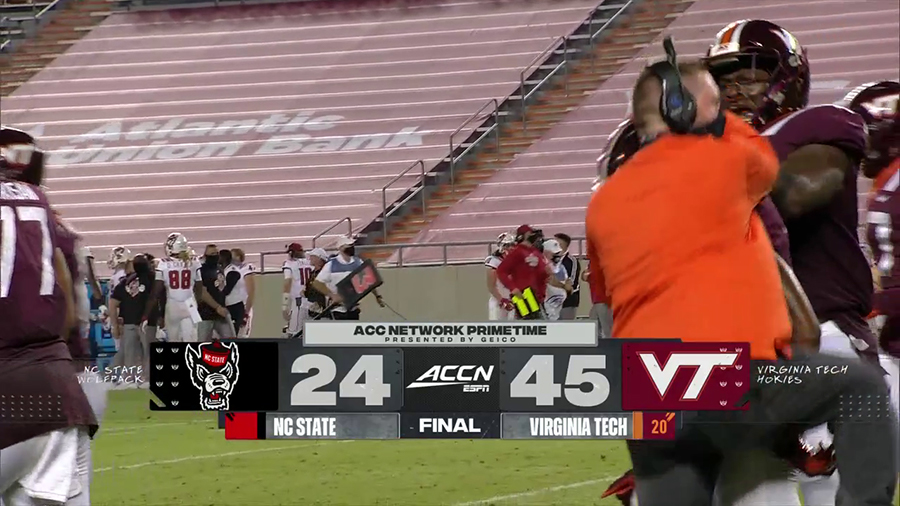 Read him all the way.

And Justus for All.

Sweet. Great things to see when you wake up in the morning.

Thanks Joe, this is the perfect antidote for an early Monday morning!

Pinch me, still can't believe we finally have college football to talk about especially with all the negative energy out there

Winning the turnover game and line play are connected

That block by 74, Nestor(?). Damn he just destroyed that guy.

If you look closely you can see the moment his soul leaves his body.

That was a "flip-flap Jack"

If only the ancient one was as big as the hulk, this would be perfect.

It's the exact moment he sees Nester pull into the gap and immediately questions his life choices. You see him flinch, but that's his body reacting. His soul was already on the bus frantically pleading with the driver to leave NOW.

The body curls in to protect itself because the mind only has time to recognize what's coming,

I'm #12 and Doug Nester was my alarm clock this morning.

I should have requested the bull rush by Reed when he pancaked the State OL. Awesome to see a giftory again. Thanks Joe!

That jet sweep action taking 4 puppies out of the play...priceless!

I am glad I didn't know about how many players and coaches were out earlier in the week. It would've caused too much stress

on that TD saving tackle by their QB, I was hoping Jenkins Murray would just cut towards him and channel his inner Kumah and stiff arm the shit out of him.

Fu mentioned on the radio post game jokingly that he shouldn't have let the QB take him down...and his disappointment in the subsequent offensive possession.

well, especially on the replay, you can see that if he had cut in, he would have preempted Hockman's tackle and had the chance to just knock his ass back.

Murray has the easy pix six if he crosses the face of the qb. Gotta think he gets a few mentions in the film study.

I thought sure it was going to be a pick 6. If you notice the QB, he knew it was a pick as soon as he let it go, if he had hesitated for just second, woulda been a pick 6

you are right, he started running almost immediately like a basketball player following their shot.

TBH, he should have cut that one back inside under the QB and walked in for the TD.

that was my thought as well in real time. If he had cut back to the middle he would have flown right by the QB and gone untouched for 6.

I'm confident he'll do better next time. Probably just got a bit too excited with the ball in his hands. Tunnel vision and whatnot.

That pancake by 74 was a thing of beauty.

Got away with hands to the face of the RG on the first INT. I'll take it though

Reed took on 3 blockers and still got the sack.

The next best part of Nestor destroying that guy is how he absolutely "big mans" him and stares him down after ending his will.

McNeil apparently tweeted post game that he was being held all the time, since deleted.

It's that kind of attitude that explains how you get boat-raced by a team missing 23 players.

Look, the Refs didn't call much...on either team. There were a few NCSU runs where OL had hands full of Hokie DL jersey. There were also multiple PI on NCSU that weren't called. We definitely got away with some holding, but that had little to do with the outcome of the game. We dominated you and the entirety of your team...spare us the whining on Twitter.

You chose the wrong team, Alim...deal with it.

Heard postgame comments from Person who also had very little credit for VT.

Fresh harvest of sour grapes in Raleigh, I suppose.

Man... that block from Nester... that's just not fair nah - its plenty fair

I like pancakes. I also like super sexy scoop blocks. TKPC members can find them in our film review today. Join TKPC!

That Doug Nester block obliteration has made me giggle since it occurred. I literally started laughing when I saw it live, giggled at the replay, and it has made me smile multiple times yesterday and today watching the gifs/replays/Coach Beau post. Just an absolute thing of beauty and then he follows it up with the intimidation after it. Absolute beaut.

You know why West Virginian that attend Tech are so great? We're smart enough to leave the state!

(Pulling for thunderinghokie to make it to grad school at VT)

On the Nester pancake play, Mitchell also had a knock down block

After rewatching the Nester block gifs some more, that Holston "block" allows the defender to go right to the pile.

Gallo's block isn't much better but at least he helped push QP into the endzone.

it's all good. The shockwave from Nester's block cleared just enough space for the TD.